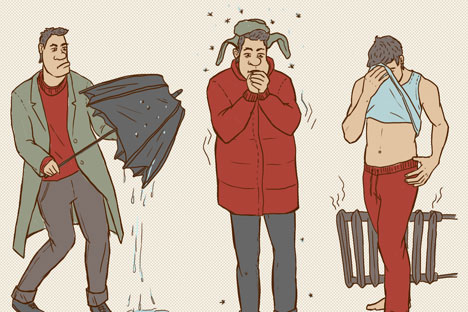 Keeping a weather eye open: With winter slowly creeping in, our newly repatriated expat recalls how Russians react to the weather.

Last week my Facebook and Vkontakte walls have been plastered with pictures of perviy sneg (first snow of the year) in several of the Russian cities I once called home.

Still being October, this is unusually early, but it does make it clear to me why most people’s first reaction here in the UK to my telling them I lived in Russia is, “I bet that was cold.”

Yes, it could be cold, I have the memories of ice burn to prove it, but Russia’s weather is not all blizzards and ice storms. For me, however, it wasn’t so much the weather itself, but the way in which Russian coped with and reacted to it that caught my attention.

The worst cold I experienced in Russia was ten consecutive days of -35C in Novosibirsk, which was not too fun when waiting for the bus every morning. Even with hat, scarf, at least three layers of t-shirts and a good pair of long johns on, it wasn’t till I had jumped onto the bus and nestled against the nearest fur coat that feeling began returning to some parts of my body.

Gloves are also essential, of course. As I soon found, they also require a little knowledge of local etiquette. When meeting a male friend or acquaintance on the street, no matter how cold it is you must remove your gloves before shaking hands. Skin-to-glove contact is a no-no, something I quickly learnt to respect.

Going home: The expat who came in from the Cold

The cold is starting to bite here in London and I’ve turned to my old friend the thermostat to keep off the chills. This, however, was rarely the case in Russia, where the authorities seem to despise giving people control over the temperature of their own homes.

In true Soviet fashion, a decision to turn the heating on centrally for a block of flats, and the precise temperature, just when the mercury plunges to a certain level. This remains constant until spring, when it is turned off after several consecutive days of what the powers that be consider warm weather.

This isn’t usually such a bad thing, but I did find temperatures in my 14th floor Moscow apartment often got to banya (Russian sauna) levels, meaning I had to crack open windows, letting in a blast of freezing cold air and running the risk of bursting water pipes (or so I was told). It was either that, or wearing the fewest clothes possible, which my flatmates of the time didn’t seem to appreciate.

It’s impossible for me talk about the weather and not mention rain. Russians all know that we in the UK get plenty of it, and they get a good drenching themselves if they go anywhere near Saint Petersburg (surely Russia’s wettest place). What they can’t understand, however, is how we treat our damp umbrellas.

Unlike us, they will shake theirs off in a hallway and choose a spot, usually somewhere in the way, to leave their open umbrella to dry. That’s right, OPEN. Russians are a superstitious lot, but opening umbrellas inside is not considered an omen of ill fortune.

Counting the cost of riding the underground with the taciturn English

I wouldn’t say I believe in it bringing bad luck, but there is definitely something a little alarming about 20 open umbrellas blocking a fire exit. This, even when pointed out, didn’t seem to bother any of my Russian colleagues, their response a nonchalant: “How else can we to dry them?”

But let us leave the rain behind and head for bluer skies, of which Russia has plenty during the relatively short summer period.

I loved the feeling I got every spring as gastarbeiters (migrant workers) began assembling summer verandas and decking. Warm evenings spent drinking and eating with friends on these are some of the best memories I have of the country.

Russians are also huge fans of packing picnics, getting away from the city and spending the day at a beach or lake. These trips invariably include eating delicious shashliki (barbequed meat on skewers) and doing a spot of sun-standing, a habit which requires standing in the tiniest Speedos or pants you can find and slowly turning to ensure an all-round tan.

To cool off, Russians are not shy of water, be it sea, river, lake or pond. Sadly, they are also not shy of littering, which, as someone who grew up by the sea, I found hard to deal with.

This is partially compensated for by the increase in smiling (yes, summer brings more smiles) that good weather brings.

Actually, writing all this about Russian summer has suddenly left me feeling rather cold here in my damp little room in autumnal London. Time, I think, for me to turn up the heating and make another cup of tea.