Russia and the EU: United by the refugees’ tragedy 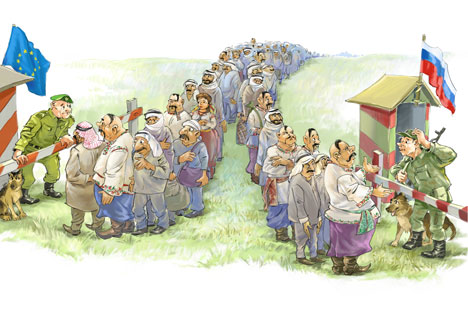 Russia and the EU: United By the Refugees’ Tragedy

Similar approach to border controls is key to managing migration.

In recent years, Russia and the European Union have developed a taste for stressing what divides them, particularly the “differences in values” which presumably make us two worlds apart. But there is at least one sphere where both the problems and the solutions are similar – that of migration and border controls.

The dilemma of Ukrainian refugees in Russia has not got as much attention in the global media as the plight of refugees from the Middle East and Africa that are currently flooding the EU. Meanwhile, we are dealing with comparable figures here.

According to official statistics from Russia’s Federal Migration Service, since April 2014, as many as 404,000 Ukrainian citizens have applied for refugee status in Russia, while 265,000 more applied for resident status. Adding to the problem is the fact that Russia’s already limited capacity to absorb migrants is now strained by the influx of mostly economic migrants from Central Asia and the Caucasus.

Experts note the relative ease with which Russia managed to give shelter to at least one million Ukrainian citizens from the embattled southeast of Ukraine. Some of them stayed and some returned to Donbass – but they all had to spend at least some time in Russia since the civil war in Ukraine started April 2014. The lack of a linguistic and cultural barrier is among the key reasons for their absorption.

“Russians managed to find housing and jobs for the refugees from southern and eastern Ukraine, because for almost all of them Russian is their native language and most of them have Soviet or post-Soviet education and working skills,” says Valery Fyodorov, head of Moscow-based VTSIOM Center for Public Opinion Studies. “According to our polls, the attitude in Russia to migrants from Ukraine is pretty positive.”

The other reason for the absence of a visible “migration shock” from the Ukrainian crisis was Russian government policy, which exempted Ukrainian citizens from rules applied to other foreigners from former Soviet republics. They were allowed to stay in Russia without registering or getting refugee status for longer periods.

However, the liberal policy ended December 1, 2015, when the Federal Migration Service canceled the exemption, limiting the duration of unregulated stays for Ukrainians in Russia to the usual 90 days – the same for citizens of - for example - Uzbekistan or Azerbaijan.

Ukrainian migrants in Russia are now facing a choice: Apply for refugee status or return to Ukraine, which may not be a bed of roses for them – especially under the new, post-Maidan regime.

So, even with Ukrainian refugees, the authorities in Russia are taking steps to stem their flow – very much like the authorities of the EU, which have to regulate the flow of refugees from Syria, even while sympathizing with the plight of the victims of the Islamic State or Assad’s government.

“At least 800,000 Ukrainian citizens who preferred Russia to other regions of Ukraine as their destination while fleeing the civil war in Ukraine – these people are both a challenge and a huge opportunity to Russia,” said Zhanna Zayonchkovskaya, a civil activist and migration expert at the Russian Academy of Sciences' Institute of Economic Forecasts. “But the authorities prefer to view it only as a challenge.”

A lot of analysts in the EU are bemoaning the fact that the need to regulate migration from the war zones of Africa and the Middle East imposes some limitations on one of the EU’s undisputed achievements – the freedom of movement between EU member states. However, the new border controls between France and Italy, as well as between Austria and some of its Balkan neighbors, have their analogues between Russia and its post-Soviet neighbors.

The project of the recently launched Eurasian Economic Union, touted in Russia as a Eurasian response to the European Union, also presupposes free movement of products, capitals and workforce. When unveiling the plans for the Union in 2011, Russian President, Vladimir Putin, said all former republics of the former USSR, as well as Asian neighbors, were invited. This gave rise to the expectation that people would be able to move as freely within the post-Soviet space as they did in Soviet times.

Reality, however, is a lot gloomier. Russia already had to establish visa regimes with two members of the Commonwealth of Independent States (CIS, the loose alliance of post-Soviet states, which replaced the Soviet Union in 1992). Turkmenistan on its own initiative set up a visa system between itself and the other post-Soviet states back in 1998, Georgia (after its conflict with Russia) followed suit in mid-2000s. With Azerbaijan, Uzbekistan and Tajikistan - the three biggest sources of economic migrants to Russia - Moscow tightened the entry rules, punishing even minor overstays of registration periods by prohibiting entry for up to five years. For the citizens of small and impoverished Kyrgyzstan, which joined the Eurasian Economic Union in 2014, the rules are not much better.

So, migration-wise, whether we want it or not, Russia remains part of Europe – drawing and repulsing inhabitants of its former “provinces,” it both attracts them and restricts their movements. And the common language here is both uniting and alienating, just like in the cases of the “imperial” English, French or Portuguese.

Dmitry Babich is a political analyst at Sputnik International.