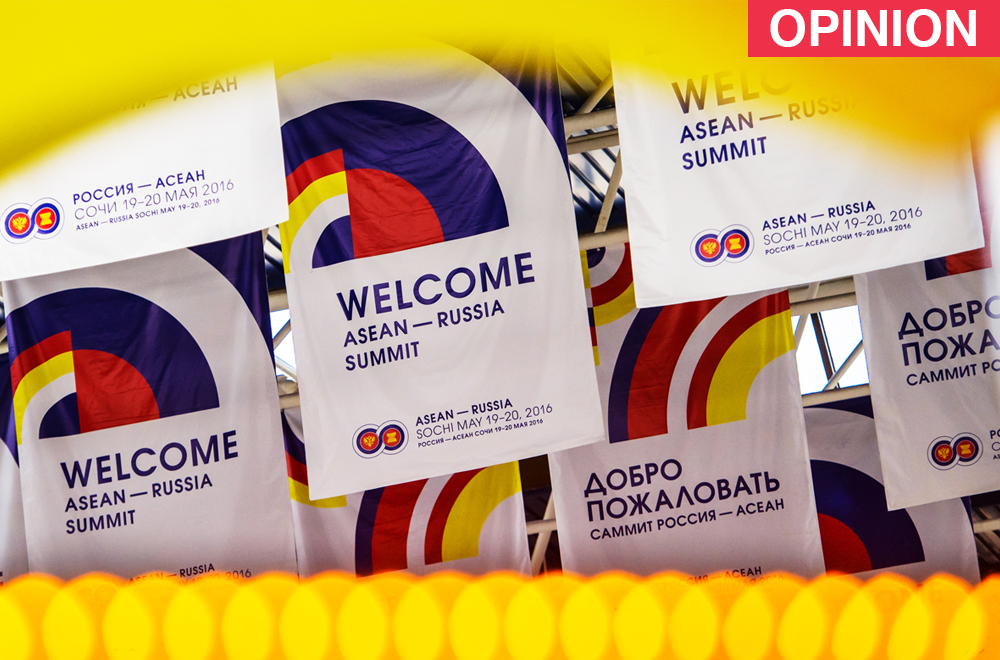 Banners with the ASEAN-Russia summit logo.

Alexei Danichev/RIA Novosti
Russia is keen to embark on a closer relationship with the regional bloc, particularly at a time when ASEAN is in search of a new countervailing force in the region beyond the U.S.-China axis.

At a recent preparatory meeting for the upcoming summit between leaders of Russia and the 10-member Association of Southeast Asian Nations, ASEAN officials politely dodged Russia's requests to become an ASEAN ‘strategic partner,’ and to hold an exclusive meeting with the regional bloc's defense ministers.

From the Southeast Asian perspective, the reason was quite obvious: despite its professed commitments and goodwill toward the region, Russia has not yet done enough for ASEAN to deserve a positive response, at least for now.

That could soon change. Russian President Vladimir Putin will not miss the opportunity to meet with ASEAN leaders during the May 19-20 summit in the resort city of Sochi, an occasion that he clearly hopes will herald a new era in relations along with closer economic and strategic ties.

Russia is keen to embark on a closer relationship with the regional bloc, particularly at a time when ASEAN is in search of a new countervailing force in the region beyond the U.S.-China axis. Moscow's eagerness to engage with ASEAN has also been driven by the search for new trade and investment opportunities, a matter of urgency since the imposition of Western economic sanctions on Russia following the crisis in Ukraine.

Until now, Moscow has had a checkered record as a dialogue partner with ASEAN. After Russia and the U.S. were admitted to the region's top-level security forum, the East Asia Summit, in 2010, Russian President Vladimir Putin failed to attend subsequent meetings, much to the chagrin of ASEAN leaders. (Russian Prime Minister Dmitry Medvedev however attended the previous EAS last November in Kuala Lumpur, on Putin's behalf.)

The first 10-year Russia-ASEAN action plan, which ended in 2015, was a huge disappointment with few achievements. A new five-year framework to be announced at Sochi will be more pragmatic and deliverable, a reflection of Russia's markedly increased interest in ASEAN over the past two years.

The volume of Russia-ASEAN bilateral trade is miniscule in comparison with China, Japan and the U.S. The latest figure in 2014 recorded a total value of $22.5 billion in two-way trade, making Russia the bloc's eighth-largest trading partner. Both sides have yet to set a target for their future trade volume.

By comparison, China and ASEAN have set a two-way trade volume at $1 trillion by 2020. ASEAN and other dialogue partners including China, Japan, South Korea, India, New Zealand and Australia are currently negotiating the Regional

Comprehensive Economic Partnership trade pact, which is likely to be finalized by early next year.

Steps are already being taken to improve bilateral trade ties. Russia recently proposed the negotiation of a free trade agreement between ASEAN and the Eurasian Economic Union (EAEU). Last year, Vietnam became the first ASEAN member to sign a free trade agreement with EAEU, and Thailand is keen to follow suit.

Over the past decade, ASEAN has worked hard to improve its organizational efficiency by instilling rule-based norms and structures. Now that the bloc is working to consolidate its overall integration through last year's launch of the ASEAN Economic Community, the opportunities for cooperation with external partners such as Russia are greater than ever.

In the Sochi Declaration, to be released at the end of the two-day summit, ASEAN will be open-minded about its future relations with Russia, according to regional officials. Since the 1980s, ASEAN and Russia have been eager to engage with one another, but for various reasons the global strategic environment has not been conducive to such cooperation, they added.

As an Asia-Pacific power, Russia has consistently sought to connect with the Southeast Asian region at a higher level than trade and investment partnerships. In 2013, Moscow put forward a new collective security proposal to ASEAN, which is currently under review. The new framework focuses on security of all countries in the region and seeks to move beyond the strong alliance system that has characterized the region since the end of World War II.

Russia would like to upgrade its ties with ASEAN to the level of "strategic partnership", following an agreement concluded between the U.S. and ASEAN last November. ASEAN accords this status only to dialogue partners which have a record of substantive engagement with the region and who support ASEAN initiatives. (The current group includes China, Japan, South Korea, India, Australia, New Zealand and the U.S.)

What Rodrigo Duterteu2019s win in the Philippine elections means for Russia

Russia's hopes of strengthening security and defense cooperation prompted the request for an exclusive ministerial level meeting with ASEAN defense ministers, an opportunity for dialogue already granted to representatives from the U.S., China and Japan. Moscow has also made it clear it will stay neutral in the South China Sea dispute, treading gingerly around a source of friction between some of the bloc's member states.

The Sochi Declaration will not carry the weight of the Sunnylands Declaration issued in February, which lauded the "increasingly close" relations between the U.S. and ASEAN after the previous year's strategic partnership agreement. However, it will contain a commitment to all the necessary regional and international norms and principles concerning rule of law, good governance, peace and stability in the region.

Beyond the realm of security and economic cooperation, Russia has pushed for closer cultural ties. In order to increase awareness of the bloc and its significance, the ASEAN Center at the Moscow State University of International Relations was established in June 2010, one of the first ASEAN-focused university research centers outside the region.

The Sochi Summit will feature numerous live performances of performance troupes from Russia and ASEAN alongside the meeting. This year has been designated by both sides as the ASEAN-Russia Year of Culture.

The upcoming summit has the potential to be a milestone for ASEAN-Russian relations. If both sides continue to work diligently on their new commitments, Russia's standing with ASEAN will be elevated in no time. As the U.S.-China rivalry continues to shape the bloc's defense and security decisions, the gradual entrance of Russia into the fray would be nothing short of a game changer.

Kavi Chongkittavorn is a senior fellow at the Institute of Security and International Policy at Chulalongkorn University in Bangkok. Views expressed are personal.

This article was first published by Nikkei Asian Review.