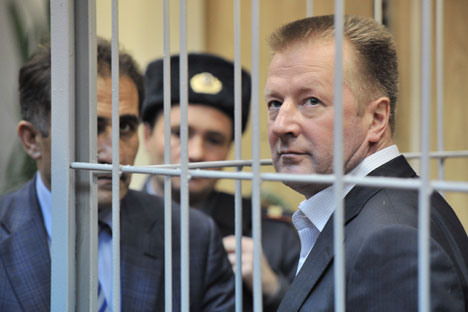 Russia’s Investigation Committee arrested Nikolai Ryabykh in mid-January, following an interrogation he was called to participate in as part of a case on OAO Slavyanka, an Oboronservis subsidiary. Source: Sergey Kuznetsov / RIA Novosti

The biggest anti-corruption campaign in the Defense Ministry in years has yielded its first arrest, at the agency’s very top. The head of the ministry’s Facilities Department has been placed behind bars for two months.

New arrests have been made as part of the high-profile criminal case connected with fraudulent schemes carried out by OAO Oboronservis.  Along with other big-shots in the military, one of the first people to be put behind bars as part of this case is a current high-ranking official in the Ministry of Defense. Following a court decision, Nikolai Ryabykh, head of the ministry’s Facilities Department, has been taken into custody.

Russia’s Investigation Committee arrested Nikolai Ryabykh in mid-January, following an interrogation he was called to participate in as part of a case on OAO Slavyanka, an Oboronservis subsidiary. In 2010, this company closed a contract with the Russian Defense Ministry’s Facilities Department for servicing one of the ministry’s bases on Moscow’s Kolymamazhny Pereulok.

Serdyukov questioned as witness over misappropriation in Defense Ministry

Although the building was undergoing major refurbishment, Nikolai Ryabykh paid for maintenance work that was never carried out. The recipient of these funds was Slavyanka’s subcontractor, ZAO Bezopasnosti I Svyazi (BIS), which belongs to Alexander Yelkin and Andrei Lugansky; both owners are now under arrest. As a result, 18.5 million rubles ($611,000) were transferred to the company’s accounts, which was then cashed in by various fly-by-night companies and stolen.

Elkin was arrested in November 2012, on the day before his 50th birthday. There were 250 people on the guest list to his party, and former Defense Minister Anatoly Serdyukov was one of the guests of honor. Rumor has it that the birthday boy and his guests were entertained by none other than Jennifer Lopez.

During the interrogation Ryabykh agreed to give testimony, but he did not admit his guilt. Despite this, the court has remanded him in custody for two months.

The company BIS hit the headlines two months ago, when it became clear that 53 million rubles ($1.7 million) had been stolen from funds set aside for maintaining buildings in military zones under state contracts.

Former head of the military, Anatoly Serdyukov, is one of the witnesses in the criminal cases against officials working at Russia’s Defense Ministry. Employees performing management functions at OAO Oboronservis and its subsidiaries, including in OAO Slavyanka, are also on the witness list. Following the results of this case, Russia’s Investigation Committee is planning to file a personal case against the former minister. Serdyukov has already been called in for questioning, but he refused to give testimony, basing his decision on Article 51 of the Russian Constitution.

Meanwhile, though they may be being held in detention centers, those accused in the criminal case for embezzlement of Defense Ministry funds continue to earn money from state contracts. Alexander Elkin’s BIS won a multi-million contract for major refurbishment to be undertaken in the Federal Tax Service’s administration buildings in Moscow. The company is also in the running for several multi-million contracts for the Investigation Committee of Russia in Moscow.

“Of course, it is regrettable that the company has become embroiled in the scandal. But we have never had any complaints against them,” says Igor Kucherenko, an employee at the Investigation Committee responsible for state purchases. According to Kucherenko, BIS has also won tenders for carrying out various construction jobs for the tax service and had put itself forward as a reliable partner.

According to Dmitry Abzalov, vice president of the Center for Strategic Communications, net profit for carrying out one state contract is the small part of its total cost.

“As a rule, the average profit is 5-7 percent of the cost of the contract, taking into account all expenses,” says Abzalov. “But it’s important to remember that construction and equipment supplies are the most corrupt schemes.”

According to the chairman of the National Anti-Corruption Committee, Kirill Kabanov, the lack of transparency in the system for managing Russian state structures creates the perfect conditions for its abuse, which comes to the fore when tenders and auctions are being held.

According to Kabanov, businessmen and corrupt officials prey on suspicious-looking tenders and divide up to 60 percent of the contract amongst themselves.

“This is the principle Bezopasnosti I Svyazi were working on when they collaborated with the Defense Ministry,” he says. But, in our country, there is no law to say that companies involved in corruption scandals are banned from undertaking state contracts.”

Combined report based on materials from Kommersant and Forbes.