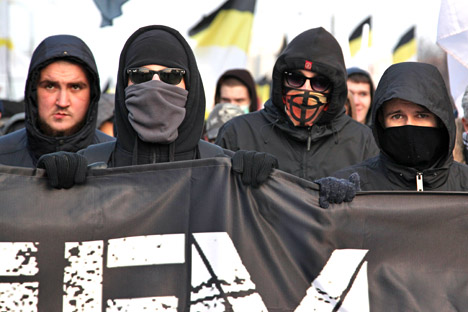 Participants in the Russian March in Moscow's Lyublino.

Kommersant
The Russian government has imposed a temporary ban on the association of Russian nationalists, with the prosecutor’s office demanding that it be recognized as extremist. RIR asks people what is happening with the nationalist movement in Russia, and why it is now the government's "new enemy."

It appeared a couple of years ago that the Kremlin and Russia’s various nationalist groups were, if not a happy couple, at least content to be in the same room. Their shared conservative values and staunch championing of all things “Russian” made them natural allies. But since the crisis began in Ukraine in early 2014, this cosy relationship has unravelled.

The Moscow Prosecutor's Office temporarily suspended the activity of the Russkiye (“Russians”) nationalist movement in August, urging the courts to recognize it as extremist and ban it in Russia.

According to the prosecutor's office, the reason they have sought suspension is because documents show that the movement's plans are "aimed at inciting enmity" towards people based on their nationality and "contain calls for a national liberation fight to create a Russian national state."

Russkiye leader Dmitry Demushkin, against whom a lawsuit has been filed, said he was waiting to be arrested "for some fictitious act," while Alexander Belov, another nationalist leader, is waiting to be sentenced to a jail term.

While nationalists believe their ranks are being purged, analysts are inclined to call it a "progressive decline." They point out that the nationalists have been unable to recover from the inner schism that divided the movement after the conflict in Ukraine began in 2014.

The split resulted in a significant part of the association proclaiming support for the pro-Russian rebels in eastern Ukraine’s Donbass region, while another section sided with Kiev, under the slogan of Russian-Ukrainian Slavic unity.

During the 2014 Russian march, a now-traditional annual rally for Russian nationalists organized in major cities across the country, they divided themselves into two columns.

Analysts, however, say it was not Ukraine alone which caused the crisis in the movement.

A decline or a threat

The fact that the Russian nationalist movement is in decline today is something not only detached observers believe, but even the movement's ideologues accept.

"The movement doesn't have any political perspective, practically the entire field has been burned and the security forces are finishing off the wounded," said Demushkin, who believes the authorities decided to mop up the nationalists "just in case." According to Demushkin, the government is afraid that radical nationalists may join forces with anti-government protesters.

"By themselves, it seems, they do not represent a danger. They've become rather silent. But when they return from the Donbass to Russia, this is a potential threat," said Alexander Verkhovsky, director of the Sova analytical centre and a specialist on nationalism and xenophobia.

According to Verkhovsky, several thousand nationalists went to fight on the side of pro-Russian rebels in eastern Ukraine and are unlikely to be pleased with the fact that the conflict in the Donbass is coming to a close.

"It cannot be ruled out that upon returning to Russia they will want to adhere to some kind of radical policy, which is why the government is trying to suppress all types of radical groups, including those inspired by Stalin,” he said.

Left without an agenda

Yet observers say that the contradictions related to the Ukrainian issue are not capable of destroying the nationalists as a force.

"What's changed in the last year is that the movement has stopped articulating a constructive agenda," said Sergei Prostakov, a collaborator at the Center of Ethno-Political Studies.

According to Prostakov, even though over the previous 10-15 years "the government would just steal their slogans," the movement still used to create something new, right up until the events of 2014, which seemed to disorient the majority of Russian nationalists.

"They realized that their interests for the first time corresponded to government policy. This is the accession of Crimea, that is, the idea of the restoration of the Soviet Union and the protection of Russians in the Donbass," said Prostakov.

However, he pointed out, this did not give the nationalists any political points: They were simply used as extras.

Verkhovsky agrees: The systemic nationalists, such as the pro-government Rodina Party, the Anti-Maidan Movement and the Great Fatherland Party, have been left without any political perspectives.

"Obviously, they are not under any pressure but it seems that the government is not really helping them. You can tell by their pitiable results at the regional elections," said Verkhovsky.

Dmitry Demushkin sees another, significant change in the Russian nationalists' position: Now they are part of the opposition.

"Until 2010 the Russian nationalists inclusively were never against the government,@ he said. “But then our organizations were banned (the Slavic Union and the Slavic Force groups are recognized as extremists – RIR) and lawsuits were filed against the organizations' leaders, first just one-time cases, now more and more often.

“Now the nationalists have turned away from the Kremlin and this is exclusively the government's fault. It has created an enemy for itself," said Demushkin.

Looking forward, none of the observers interviewed by RIR were unable to say exactly what will become of the sapped nationalist movement in the future.

"Russian nationalism is going through a heavy crisis, but all crises end in something. It is unlikely to die a sick man's death, this is impossible," said Alexander Verkhovsky, who believes the radicalization of the movement is inevitable.

Meanwhile, Sergei Prostakov believes that November’s Russian March will be a key yardstick for evaluating the current state of the movement.

"Last year the demonstration gathered a minimal number of people [1,500, according to the police – RIR], even though in better times the march would gather about 10,000 people," he said. 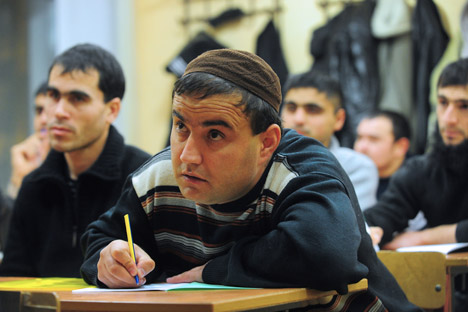