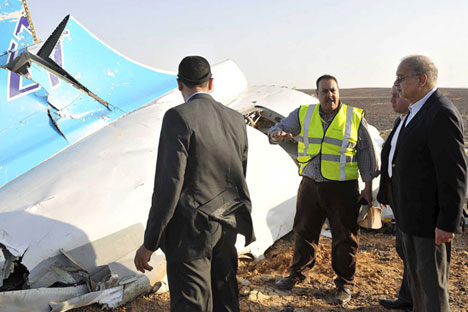 Egypt's Prime Minister Sherif Ismail (R) listens to rescue workers as he looks at the remains of a Russian airliner after it crashed in Sinai on Oct. 31, 2015.

Reuters
The head of Russia’s security service, the FSB, has announced that the cause of the plane crash in Egypt on Oct. 31 was a terrorist attack. RBTH asks aviation experts how explosives could have been placed on board and why no one noticed.

Russia’s security service, the FSB, has announced that the crash of the Russian passenger plane over Egypt’s Sinai Peninsula on Oct. 31 was the result of a terrorist attack – an improvised explosive device equivalent of up to 1.5 kg of TNT detonated on board shortly after take-off.

Experts from the security agency are taking part in the investigation and analysis of the crash site in the north of the Sinai Peninsula, where the Airbus A321 came down 23 minutes into the flight to St. Petersburg. All 224 of those on board were killed.

The FSB, which made the statement on Nov. 17, has already announced a reward of $50 million for any information about the terrorists. Less than an hour later, Reuters, citing its own sources, reported the arrest of two employees at the airport of Sharm el-Sheikh, from where the Kogalymavia (Metrojet) flight departed shortly before the disaster. However, this information was later dismissed.

Since investigators have concluded that there was no neglect during the inspection of passengers or baggage in the airport itself, aviation experts agree that planting a bomb would have been easiest for a member of the airport services maintaining the aircraft.

There are several ways the explosive device could have got on board the aircraft.

Leonid Koshelyov, a board member of the Russian Association of Pilots and Aircraft Owners, does not rule out that the bomb could have been placed in the luggage, as was the case with a Boeing 747 blown up over the Scottish town of Lockerbie by Libyan terrorists in 1988. 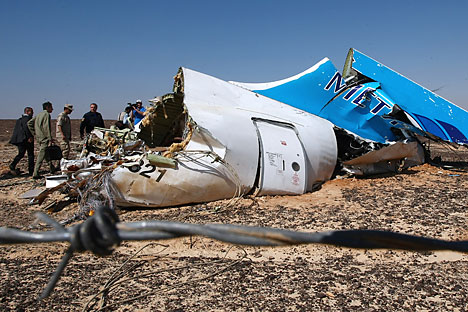 But if so, it is most likely that it got there after the luggage had been X-rayed at the airport, and it could have been planted by one of the staff, for instance, by a baggage handler, he said.

After checking, the luggage from the belt reaches the baggage handlers, who put it on carts or in freight containers, deliver it to the airliner and unload it manually into the luggage compartment. After it is unloaded, no one re-examines it.

It is also possible that a suicide bomber was responsible, though it is the least likely option in this case, according to Lukashevich.

"A suicide bomber can get on board, carrying explosives on the body or in a variety of ingredients, which he mixes during the flight. But in this case, it is much more likely that the bomb was in luggage or in the luggage compartment, somewhere in the structure of the aircraft," Lukashevich said in an interview with RBTH.

However, if the terrorist had been a member of the airport personnel, he could have planted a bomb not only in the luggage compartment, but also in many other places on the airliner.

"There are technical hatches, which a person who knows the aircraft structure has access to. And it is possible to shove just about anything into these hatches during the maintenance of the aircraft," Magomed Tolboyev, the honorary president of the International Aviation and Space Salon MAKS and a test pilot, told RBTH. 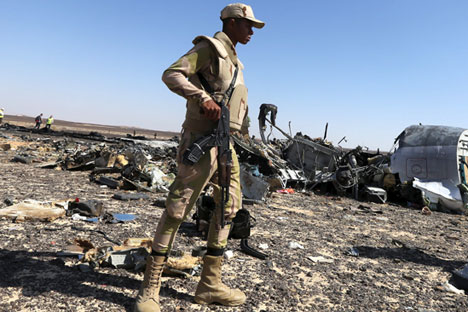 According to Tolboyev, it is enough to put 200 g of explosives in capsules for a powerful explosion. This could be done by the last to check and close hatches. Previously, there was a flight engineer on board, but there is no such position anymore.

"This charter plane, it comes and goes. Who maintains it, who checks the plane before take-off? We don’t know," said Tolboyev.

On the ground, it would also be possible to place a bomb in a niche of the chassis: While the plane is on the ground, the chassis doors are open. "They could magnetize it and put it, say, somewhere in the rack," explained Lukashevich.

In addition, he pointed out, during maintenance a number of local people can enter the plane to clean the cabin and toilets, while if the crew takes meals on board, the bomb could also be put in a food container, as in the movie The Concorde Affair, and this is also a possible scenario.

Are these people checked? Theoretically, of course, yes: This is as much part of aviation safety, as scanning passengers at the entrance to the airport. According to Leonid Koshelyov, the airfield services staff are typically checked in various ways – he gives the example of trying to throw something over the perimeter fence and observing whether they notice or not.

However, the airport staff may not have been monitored particularly closely, he said, simply because if an individual has been working on the site for a long time he is likely to have been considered "one of our own."

Read more: Egypt air disaster: Are Russia and the West now in the same boat?