Under the shadow of the Su-24 shootdown 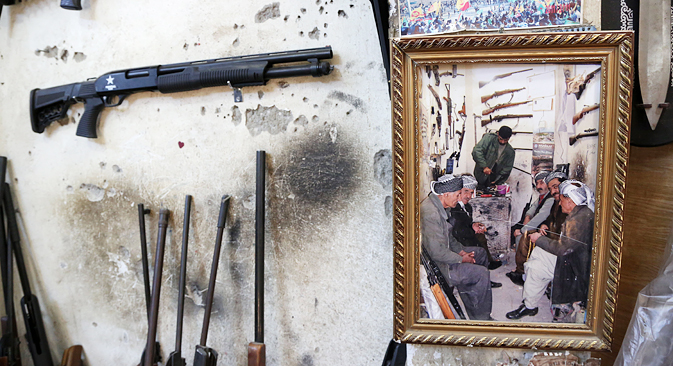 AP
A week after a Turkish fighter jet shot down a Russian Sukhoi Su-24m bomber near the Syria-Turkey border, a correspondent traveled by road from Iraqi Kurdistan to Turkey.

All images used in this article are for illustrative purposes only. In this file photo taken on Sunday, Aug. 10, 2014, displaced Iraqis from the Yazidi community cross the Syria-Iraq border at Feeshkhabour border point, in northern Iraq. Source: AP

The Kurdish militia offensive in Northern Iraq has forced Islamic State (ISIS) militants to withdraw deep into the country. However, substantial parts of Iraq are still in the hands of the Islamists. This includes oil fields, roads, and cities such as Mosul with hundreds of thousands of inhabitants. The ISIS currently controls many kilometers of highways around Mosul that connect Iraqi Kurdistan with Turkish Kurdistan. Kommersant Special Correspondent Yuri Matsarsky traveled from Iraqi Kurdistan to Istanbul.

Communication between Iraqi Kurdistan and Turkey is not interrupted but is significantly damaged. Cars are taking detours on country roads.

“It's a long way, it'll take a lot of time,” a girl employee at a transportation agency in Suleimaniyah says. “It's about 15 hours to the Turkish border and Diyarbakyr, where there's an airport,” she says. “But that's the minimum time, it can take longer.”

There are two airports that are still functioning in Iraqi Kurdistan, Suleimaniyah and Erbil. Regular flights connect northern Iraq to Baghdad, Basra, Doha, Istanbul, and even London and Munich. But the war in the region often disrupts airport services, leading to flight cancellations.

At the end of November flights were suspended for almost a week while the Iraqi government awaited the launch of Russian missiles from ships on the Caspian Sea towards Syria. It was possible to go beyond Iraq only via automobile, taking detours along country roads to avoid ISIS.

Those narrow dirt roads, occasionally filled with concrete and asphalt, are literally swarming with trucks. They transport oil to Iran and Turkey.

On the way back, they bring food and construction material for the Kurds.

High oil prices - one of the main sources of income for Kurdistan – have created a construction boom in the region. And even though the prices have fallen, the construction projects are being completed. There are real skyscrapers being erected in Erbil, and contemporary office buildings are coming up in Kirkuk and Suleimaniyah.

The sheer number of trucks has led to the roads being congested for a few hundred kilometers, and right up to the border. Buses go around them using tertiary roads, which are usually nothing but hardly visible lanes on the rocky earth. In late November, it gets dark early in the desert and passengers help the bus drivers on these bypasses with the light emanating from their cell phones. The country roads often pass just a couple of dozen of kilometers from the IS vanguards and a wrong turn can be fatal.

On the Iraqi-Turkish border, passenger transportation moves separately from the cargo trucks, in a different line. It is smaller but nevertheless extremely slow.

“Give me your passports, I'll take them to the Turks,” says a driver. “What's this? A Russian passport? Wasn't it a Russian plane that the Turks downed a few days ago? I think they won't be very pleased to see your passport. I'm afraid we may have to spend the night here now.”

But in the end it wasn't so bad. Passport control took about two hours and was done at a distance. The driver had taken the passports to the border guards and brought them back with stamps permitting entry. No representative from the Turkish authorities came to see the passengers.

In Turkey, the reaction to a Russian document is neutral.

“It makes no difference to me whether you're Russian or Chinese, Indian or Brazilian,” says Mustafa, a hotel manager in Istanbul. “Everyone is a human being. Yes, relations between our countries are not so good at the moment. But this is a matter between politicians, not between us.”

Mustafa says the politicians want the people to fight but that should not happen. “Let Erdogan and Putin quarrel between themselves while we continue visiting each other and doing business with each other.”

Kurdish Syrian refugees carry their belongings after crossing the Turkish-Syrian border near the southeastern town of Suruc in Sanliurfa province in this September 25, 2014. Source: Reuters

However, in a similar conversation, which took place a couple of hours before the official statement that Moscow was going to stop the visa-free regime with Turkey, Mustafa admitted that only two days after the death of the two Russian servicemen on the Syrian-Turkish border, Russians cancelled up to 20 percent of their reservations in Turkish hotels.

But there are still many Russian tourists, and other visitors. The businessmen who were once called shuttle traders have also not gone anywhere. Having become respectable and wealthy, they are still profiting from the same business they engaged in after the collapse of the Soviet Union.

They buy inexpensive Turkish clothes, send them to Russia and resell them in flea markets or through trade networks. It is they who are the main clients of an entire block of wholesale clothing stores in Istanbul's Laleli neighborhood. Practically all the vendors here speak Russian, and in their minds convert the prices from Turkish liras to Russian rubles. Obviously, the news about the anti-Turkish sanctions did not have a very positive effect on them. The vendors are still confused and, hoping that good relations would be restored.

Meanwhile it seems like the Russian buyers understand that the break in economic relations will last for a while.

“We'll take the new collection anyway, it's nice. If not Russia, we'll ship it to Ukraine or Moldavia," says Lena, one of the first Russians to engage in shuttle trade with Turkey. She has come to a store managed by familiar vendors and is examining the clothes on the mannequins with expertise.

But she herself does not intend to buy anything. She says that before taking the wholesale batches you need to be sure that they will pass the Russian border. If the customs agents do not let them through, logistic work must be done to take them to other countries, to look for mediators and retailers. Only then can you buy and send the jeans and jackets.

Masked members of YDG-H, youth wing of the outlawed Kurdistan Workers Party (PKK), sit next to their weapons in Silvan, near the southeastern city of Diyarbakir, Turkey, August 17, 2015. Source: Reuters

Lena, who has lived in Istanbul for the last 15 years, is convinced that she has enough acumen and money to redirect her business to other countries. But she feels sorry for those who have not accumulated enough resources. Thinking about how much money can be lost and how Russians will go without Turkish clothes and footwear, Lena sighs, saying that it will be difficult for everyone to get out of the current crisis. She also admits that she does not want to look for new partners in Odessa or Chisinau to replace the old trustworthy ones who have been successfully working in dozens of Russian cities for a long time.