Doing it for the kids: Playing the role of Russia’s Santa Claus 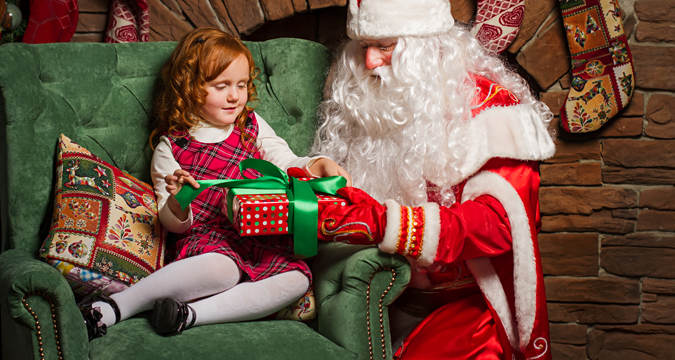 Lori/Legion Media
Acting the parts of Russia’s two main festive characters at traditional New Year shows requires those playing the roles to be kind, quick-witted and resourceful, in order to maintain children’s belief in the fairy tale. RBTH found two actors who become Ded Moroz (Grandfather Frost) and Snegurochka (Snow Maiden) every winter, and learned some of the tricks of the trade.

Konstantin Leschenko has been working as a Ded Moroz, or Grandfather Frost, for six years. Every festive season he dons his red coat, attaches his artificial beard and sets off to wish a happy New Year to children and grown-ups alike in the role of the character, which is comparable to that of Santa Claus. He first started doing the job just to earn a bit of extra money but has since realized that he can create a fairy tale for other people, and this gives him great joy.

“I like working with young children, although I do have to entertain grown-ups at corporate New Year parties too. Children believe in magic and forever surprise you with their sincerity,” he said.

Leschenko very much likes coming as Ded Moroz to kindergartens, where children sometimes surprise him with questions that come as a challenge to him as a real person, let alone as a fairy tale character.

“For instance, once we were working in a kindergarten and there was this boy who throughout the whole performance looked at me very attentively, did not take part in any of the contests and then at the end of the show came up to me and asked: Grandfather Frost, but what about the snow? I should tell you that there was very little snow that particular winter,” said Leschenko.

For a second I was at a loss what to tell him, but then I invented a story that the snow clouds had got stuck somewhere up in the mountains and there was a traffic jam, that why it was taking them so long to get to us.”

Notwithstanding questions like these and requests to see the reindeer, despite the fact that the person playing Ded Moroz has arrived by car, nothing should destroy the fairy tale and the actor should be true to his image to the very end.

“It is very important me that children do not see me as an actor, even when I am leaving. all my efforts would have been in vain. The magic of this holiday is so fragile and precious that I want the kids to preserve this fairytale feeling for as long as possible,” said Leschenko.

Ded Moroz has to maintain his image not only during the performance. According to Vladislava, an employee of the Museum of Russian Cuisine near Moscow, they always stuff their Ded Moroz’s pockets full of candies so that he can give a candy to every child he meets.

“When our Ded Moroz gives a show at another venue or just needs to walk the street before he gets to his destination, we always put candies and other sweet things into the pockets of his coat, so he can present everyone he sees with a little something. Thus, the fairy tale about a kind and generous Ded Moroz who comes to visit all children and not just those who are attending the show becomes a reality,” said Vladislava.

To convince the children that the Ded Moroz is real, actors have to resort to various tricks, like sticking their hands in , for example.

“At our shows, children, especially the small ones, try to feel Ded Moroz’s hands make sure that he is cold and real,” explained Vladislava. “So before entering the room as Ded Moroz, the actor puts his hands in the snow.”

Marina Sukontseva has been working at New Year performances for more than 15 years already and admits that it is not always easy to persuade the children that you are Ded Moroz’s granddaughter and little helper Snegurochka and not a real-life person.

“Once I was acting the Snegurochka at a show in my son’s kindergarten. I had a costume on and – since I wear my hair short, whereas Snegurochka has a long braid – I had a wig on too,” she said. “ I went home and in the evening I returned to the kindergarten to pick up my son. Suddenly one girl, pointing at me, said: Look, this is our Snegurochka! To which another girl replied: Are you mad? Snegurochka has a braid, while this one is nearly bald.”

Sometimes, the Ded Moroz outfit also gives rise to doubt. Konstantin Leschenko recalls that as a kid he was always confused when Ded Moroz was dressed in a blue since he knew that the real Ded Moroz should have a red coat. The beard can also present a pitfall.

“During the show, we have a routine for small children, when Snegurochka leads them to me and sits them on my lap,” said Leschenko. “And there was this small boy and Snegurochka tells him: Look, Ded Moroz is not at all scary; feel his beard, it is nice and soft, isn’t it? And the boy replies: Yes, it’s nice; I have one just like this at home, a beard on an elastic band.”