Motorcades and lively dances: What to expect at a typical Chechen wedding 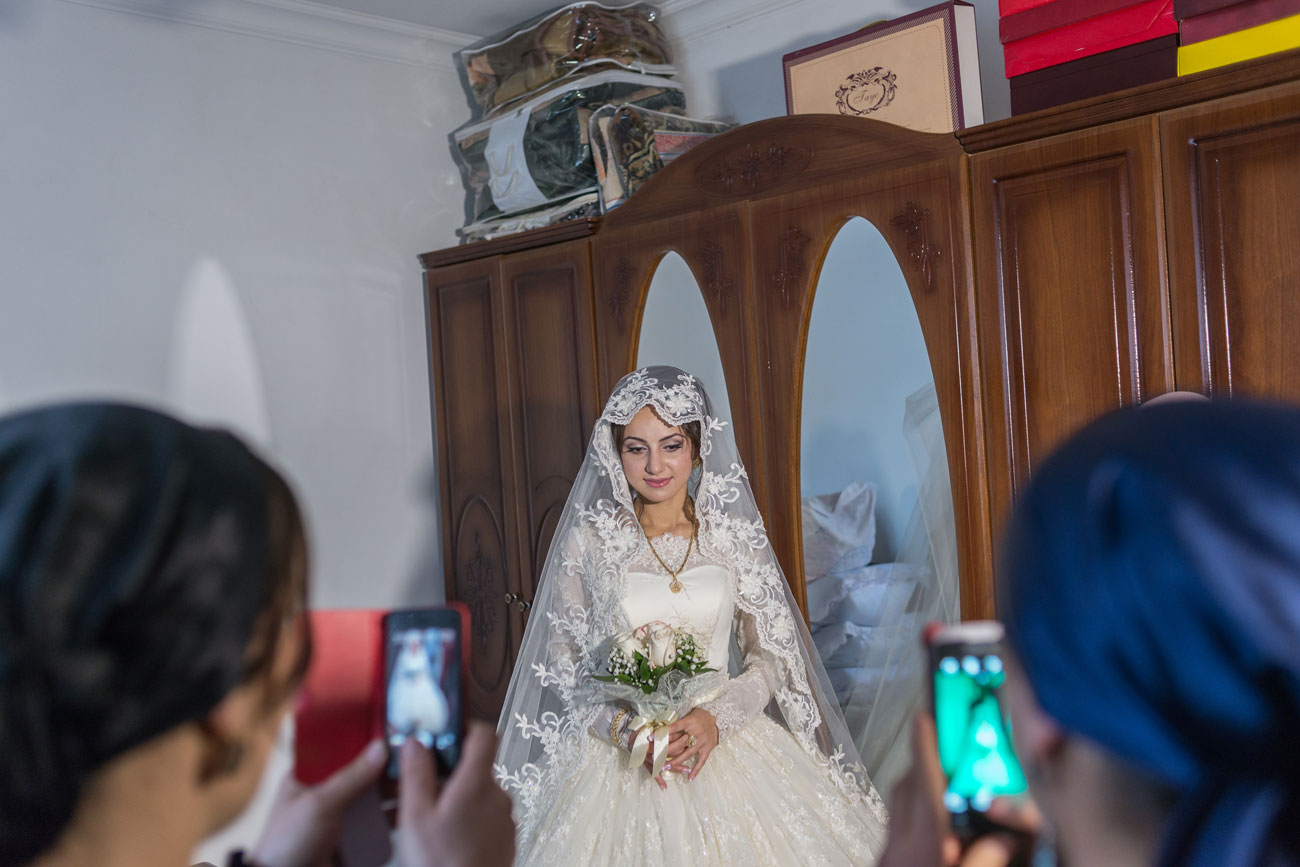 Traditional Chechen wedding starts with a feast in the house of the bride.

Vladimir Sevrinovsky
At a typical Chechen wedding no one gets kidnapped and the bride is sad just for the sake of show, says Vladimir Sevrinovsky, a Russian expert on the Caucasus and the author of a guide to Grozny, the region’s capital.

Usually, the media write about Chechen weddings in connection with gross violations of women's rights, unequal marriages or polygamy. The public loves horror stories and Chechnya, unfortunately, has a lot of them. Still, for the majority of young Caucasian men and women, a wedding is simply a joyful celebration and many Chechen families are known for their remarkably harmonious relationships. The wedding of Islam Batayev and Elina Shamelkhanova from the village of Gikalovo near Grozny was one such wedding.

Preparations for the wedding began many months in advance. The process starts with the parents of the future husband making inquiries about the girl and her family going back generations with the thoroughness worthy of a good investigator. The proposal is made either directly or through relatives only after they find the bride-to-be worthy of their son.

Decency requires the bride to reject the proposal at first and accept it only upon some reflection. By tradition, the bride and groom should not see each other prior to the wedding. In reality, modern Chechens ask their friend to take the phone number of a future, potential wife and communicate via texts and sometimes even – gasp! – by chatting on Skype and social networks. If the desire to see their future partner is irresistible, they meet, but only in front of numerous witnesses.

Feast in the house of the bride

After months of preparation the day of celebration begins. First, there is a feast in the house of the bride. Female family members and friends prepare food and the bride appears before photographers in her wedding dress. At this wedding the female guests are having fun and are willing to pose – a real coup for a journalist, as it is usually difficult to persuade a young Chechen woman to have their picture taken. However, the mother and grandmother sigh, as the only daughter is preparing to leave the family.

Vladimir Sevrinovsky<p>A relative of the groom enters the house to pick up the bride.</p>\n

Vladimir Sevrinovsky<p>He seats her in a Toyota Camry, an incredibly popular car in Chechnya.</p>\n
1/2

A relative of the groom enters the house to pick up the bride. He seats her in a Toyota Camry, an incredibly popular car in Chechnya. It seems that all the rich Chechens are seeking to buy a black Camry, and if possible, with two tailpipes.

Numerous relatives gather on the porch. The car is started, but the gates are locked. The women demand a “ransom.” As soon as they get it, the motorcade rushes into the house of the groom, accompanied by the sound of shots. Officially, it has long been forbidden to fire guns at a wedding or for civilians to carry weapons in Chechnya, but outside Grozny, the authorities sometimes turn a blind eye.

Every driver in the motorcade tries to take the place directly behind the car with the bride – this is considered to be a good omen. They say a dozen Porsches and Infinitis were smashed to pieces at one wedding in North Ossetia in the fight to take this lucky place.

Sometimes the bride and groom go to the marriage registry office, but the Sharia ceremony is much more important. Polygamy happens, too, and is justified locally by the fact that there were not enough men after the war. Additionally, marriages of Chechen women with people from other ethnicities, not to mention religions, are not encouraged. But it is rare that a wife allows her husband to take a second bride.

Not long ago, the abduction of brides was something of a phenomenon. It existed in Soviet times and became quite commonplace in the 1990s. Now it is forbidden – a priest who registers such a marriage will get defrocked, while the would-be groom will be fined 1 million rubles (about $15,000).

Feast at the house of the groom – only without the groom

The celebration continues at the house of the groom. Women and men eat in separate rooms. The men's table is even served exclusively by men. Only soft drinks are provided, but I am offered alcohol by the server, who pulls me aside.  The logic must be that the Moscow guest might not think that it’s a real wedding without it.

As the elders and honored guests give solemn speeches the bride is brought into the room, where she is ceremonially entertained by her new relatives. The bride is supposed to show deep sadness and modestly lower her eyes, even if her heart sings and her lips want to smile.

The groom is not supposed to be present at his own wedding. But if the curiosity becomes unbearable, the future husband peeps through the window, while guests studiously pretend not to notice such an immoral act.

What is a wedding without a Lezginka dance?

After dinner, guests move over to the neighbor’s property. Their spacious yard is a good location for the Lezginka dance. Everybody in the Caucasus dances it. In different republics the styles are different, so an expert will effortlessly recognize who dances it – an Avar, an Ingush, or a Lezgin, whose ancestors gave the dance its name.

But the central images are the same: the man is a fast-flying eagle and the woman is an elegant swan gracefully floating away from the pursuing predator, who is forbidden from touching her.

One song blares after another from the powerful speakers in the Lada Priora's trunk (a popular Russian-manufactured car – RBTH). Even the more modest women wearing hijabs move in such a way that it takes your breath away, while young men dance as hard as they can. For some, the Lezginka is a dance for two, almost like a tango. Others ham it up for the crowd.

Vladimir Sevrinovsky<p>The youngest guests dance with more fervor than all of them.</p>\n

Vladimir Sevrinovsky<p>The man is a fast-flying eagle and the woman is an elegant swan gracefully floating away from the pursuing predator, who is forbidden from touching her.</p>\n
1/3

The youngest guests dance with more fervor than all of them – sometimes with each other like adults or with their mother. And in the corner of the spacious yard, sitting comfortably in chairs and watching the young ones are those for whom fiery passions are in the past. But on rare occasions they may step into the circle, too. Sometimes you can see a young horseman delicately dancing with a silver-haired mountain woman.

After the celebrations wind down, the newlyweds can finally meet. Their wedding night is waiting for them, as are the many gifts and dowry chests, which the bride will bring with her to her new home.