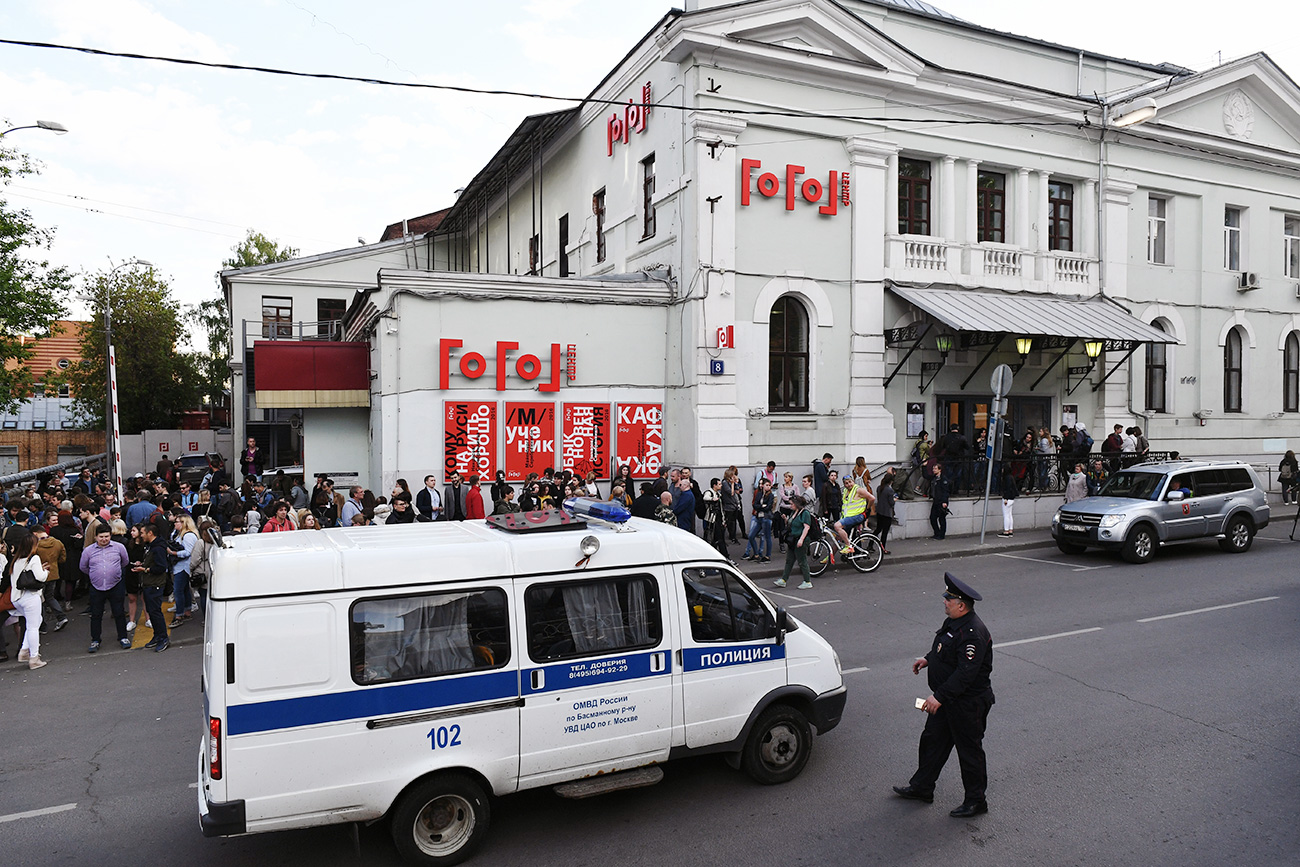 On May 23, after initial reports about the police searches, cultural figures signed an open letter to President Putin to support Serebrennikov. Photo: Police and passers-by at the Gogol Center in Moscow.

Maksim Blinov/RIA Novosti
Kirill Serebrennikov, the artistic director of Moscow’s famous Gogol Center Theater, has been released from custody after questioning by police. Nevertheless, authorities still consider him a “witness” in the case. In the meantime, prominent Russian cultural figures had a personal conversation about this case with President Vladimir Putin, who commented on the situation.

Theater and film director Kirill Serebrennikov, a Cannes prizewinner, was released after questioning at the Russian Investigations Committee in relation to an inquiry into embezzlement of public funds. The committee commented in a statement that Serebrennikov is still regarded as a witness in the case, and might still be obliged to appear before the official investigator.

On May 23, police searched Serebrennikov’s theater office and home. Later that day, law-enforcement officers explained that the search was connected to a 2014 inquiry into the embezzlement of 200 million rubles ($3.5million) in state funds for the promotion of the arts. Police also raided at least a dozen other addresses.

Order from on top

On May 23, after initial reports about the police searches, cultural figures signed an open letter to President Putin to support Serebrennikov. The signatories expressed hope that "the investigation will be conducted in an objective and fair manner, without excessive cruelty to those involved, and will not disrupt the creative activities by the theater, the troupe, and Kirill Serebrennikov himself." 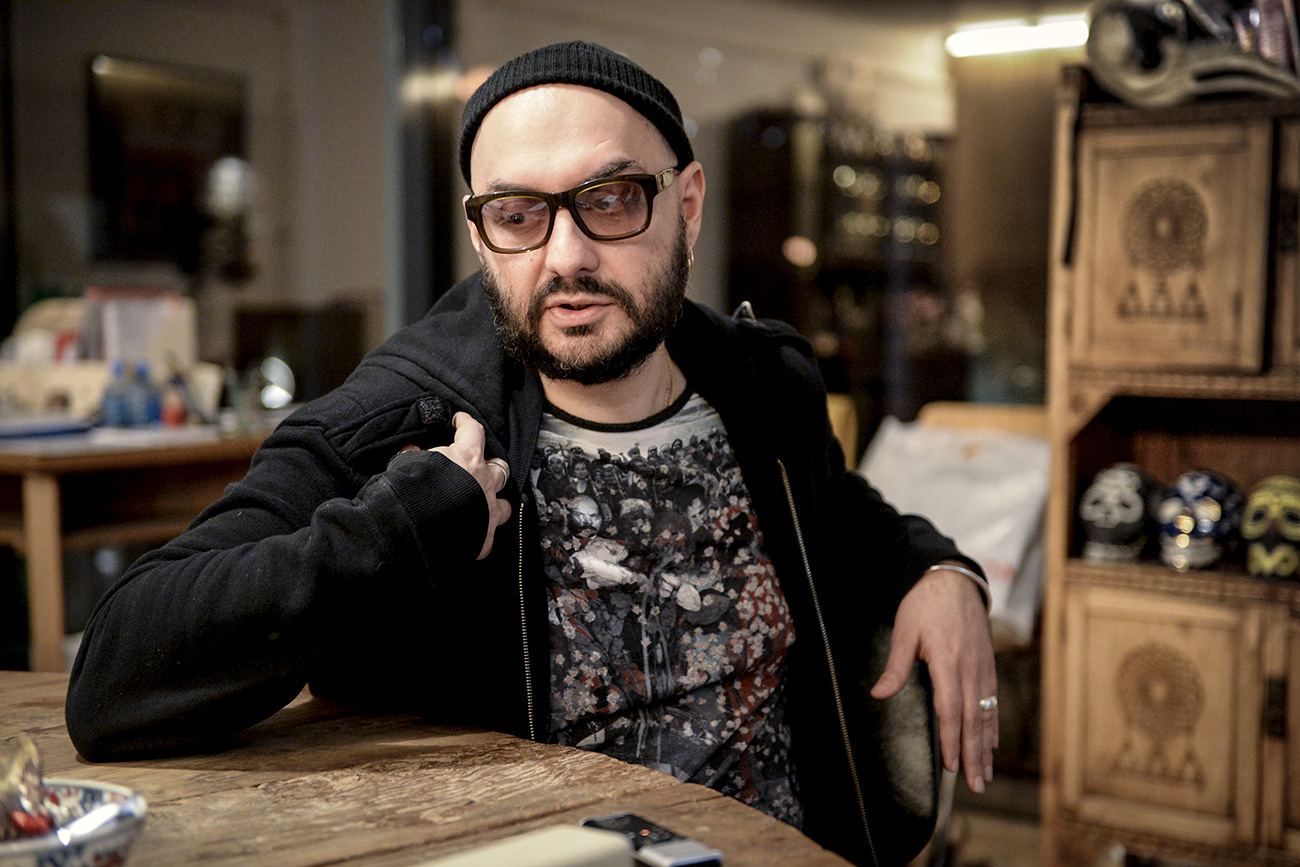 On May 24, after an awards ceremony in the Kremlin, Yevgeny Mironov, the artistic director of the Theater of Nations, submitted his plea to Putin in support of Serebrennikov. Photo: Kirill Serebrennikov gives an interview at the Gogol Center, Moscow. Source: Valeriy Melnikov/RIA Novosti

The statement was read aloud outside the theater by Chulpan Khamatova, a famous actress and co-founder of the non-governmental charity, Podari Zhizn. (In 2012, Khamatova was featured in a promotional video as part of the campaign, "Why I’m voting for Putin.")

"The presidential administraton says that cultural figures have manifested a strong negative emotional reaction to yesterday's events," reads a post on the anonymous insider channel, NEZYGAR, that is available on the Telegram Messenger app. "In the meantime, Serebrennikov's supporters are asking for an audience with the president. This request will likely be granted."

On the following day, May 24, after an awards ceremony in the Kremlin, Yevgeny Mironov, the artistic director of the Theater of Nations, submitted his plea to Putin in support of Serebrennikov. By that time Serebrennikov had also been supported by Vladimir Urin, general director of the Bolshoi Theater, and by the Association of Theatrical Critics. Andrey Kolesnikov, a special correspondent with the newspaper, Kommersant, reported (in Russian) on the "heated and even loud" dialog between Putin and Mironov.

"But why? Why do this?!" Mironov continued. "You’re going to fly to France on Monday [to meet with newly elected President Emmanuel Macron - RBTH]! Why would you need this?!" "Just because they’re acting like fools," Putin replied suddenly.

As other anonymous insider channel on Telegram reported (in Russian), the instruction to maintain Serebrennikov's status as a witness in the case was issued personally by Alexander Bastrykin, the Investigations Committee chairman: "There was a clear-cut plan in the morning [of May 23] to either put [Serebrennikov] in detention or release him with a written undertaking not to leave the city. However, later during the day, after the artistic director had been taken in for questioning, an instruction to cancel that plan was suddenly made at the very top of the committee. So what happened? Well, as they say, someone is being stupid."