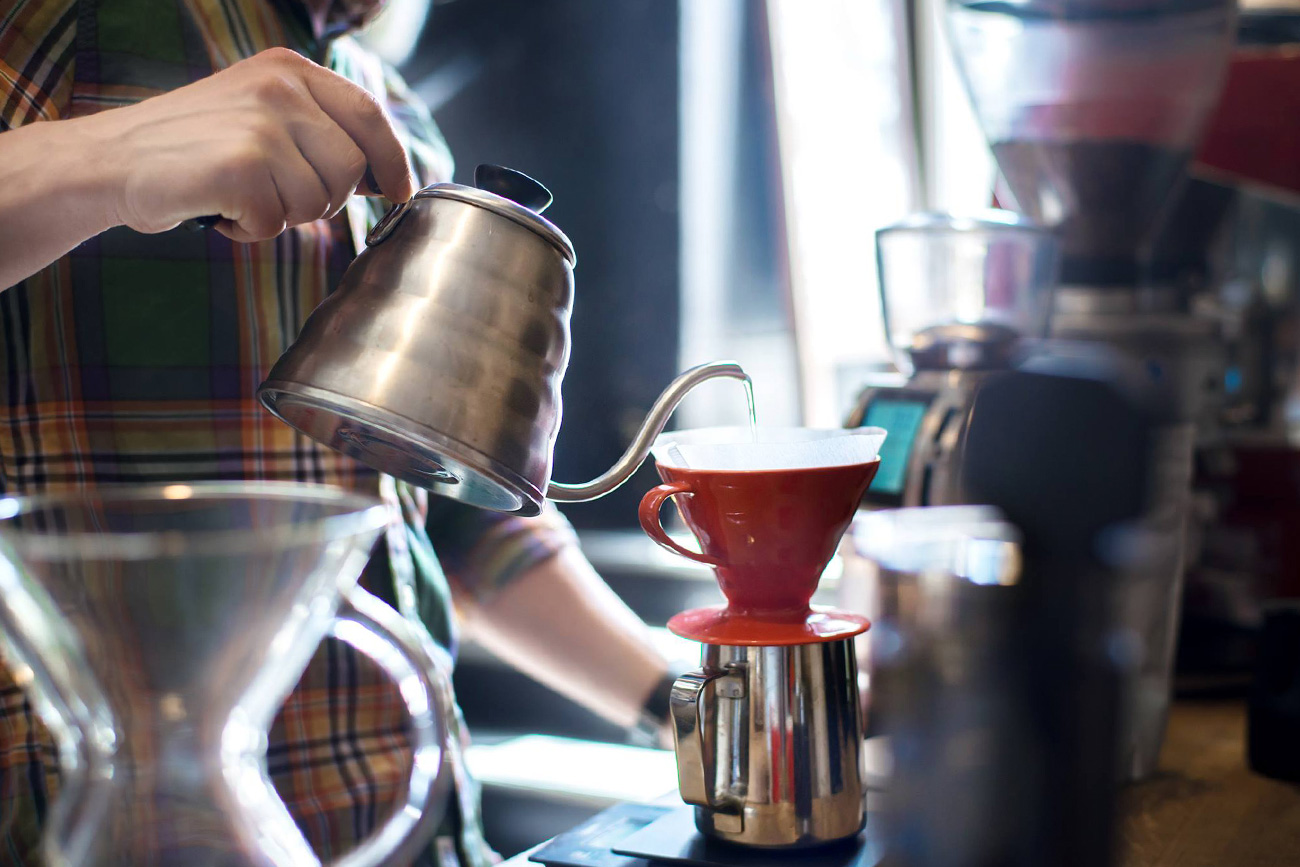 “I can feel berries, almost currant,” says a customer who is sitting with her laptop in a Chernyi (black in Russian) Cooperative, an indie coffee shop on Pokrovka Street. “Yes, and you wouldn’t feel it in a cappuccino,” Pavel, answers.

It has become common for small coffee shops to pop up everywhere in the world, including France, Britain, India and even the Philippines. They use alternative ways of brewing, roast coffee by themselves, and greatly favor black coffee. Such cafes are also are starting to compete with coffee giants like Starbucks.

Moscow is no exception, but the so-called “coffee revolution is just starting,” says Pavel, one of the founders of Chernyi Cooperative. Apart from making ordinary cappuccino and flat whites, they specialize in alternative ways of brewing with an emphasis on black coffee, which are uncommon in Russia, where 59 percent of coffee consumers rely heavily on instant coffee.

“We did not have an espresso machine”

The most popular coffee beverages in Moscow are “sweet drinks like raf or latte with syrups,” says Stefan, a member of Chernyi Cooperative. 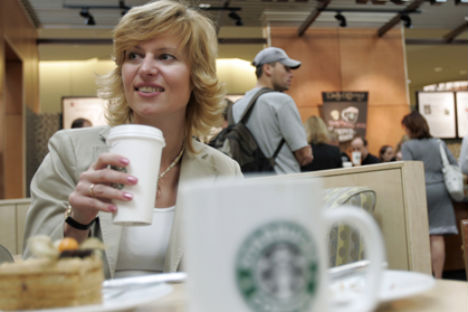 Raf, an invention of Coffee Bean, Moscow, is a shot of espresso steamed together with cream and sugar. Created in the mid 1990s, the sweet drink remains popular in Russian coffee shops and has many variants.

Chernyi, known for starting as a black-only coffee shop, stays away from the hype. “We were one of the first cafes to start making coffee in a different way,” says Pavel. “We did not have an espresso machine, and for the first two years we worked entirely with V60, aeropress, chemex and syphons.”

Now Chernyi favors two alternative ways of brewing coffee: V60 and aeropress. What distinguishes them from espresso machines is “an absence of pressure, which helps one understand the real taste of the bean,” says Stefan. Besides, they leave a “wider range for experiments,” he adds.

The future of Moscow coffee shops

Anastasia Sorokina has an Instagram account dedicated to small coffee shops in various parts of Moscow. She barely goes to Starbucks as it has “too much sugar in everything and a bitter espresso.”

Anastasia is fond of either cappuccino or flat white without any sugar or syrups. She drinks “V60 with great pleasure,” when time permits.

“I still remember how I tried a cappuccino made from two sorts of Ethiopian coffee beans roasted by SweetBeans [Krasnodar-based micro-roaster company],” Anastasia says. “There are so many good places in Moscow like DoubleB, Drinkit and Point Coffee&Food.”

As for alternatively made black coffee, she pinpoints, it will have a “richer flavor than ordinary Americano.” Alternative brewing is an “excellent opportunity to really taste the coffee,” Anastasia adds. She also believes that “in the future they will gradually force out sweet coffee drinks,” though regular cappuccino and latte won’t disappear.

Nina, a member of Chernyi, talks about how “a big family, comprising of a mother, father and their two daughters and their own families, regularly visits Chernyi,” she says. “They are fond of flat white and cappuccino, but lately they have been showing interest in V60 and we told them all about it.”

In its four years of existence, Chernyi has evolved from pop-up stores and coffee corners, sometimes on the verge of closure, to an independent coffee shop. Its main founders, Pavel Shuvaev and Artem Temirov, were philosophy students at Moscow State University and wanted to open a business based on the principle of responsible consumption and fair trade.

They buy green coffee from suppliers in Europe, roast it themselves, and use it in a coffee shop as well as sell it ungrounded in packages.

“At first we worked with roasted coffee by Camera Obscura and Double B [local coffee roasters in Moscow],” says Pavel. Being a coffee geek, he explains that in the long-term perspective, “roasting by ourselves is a key for selling coffee packs and going wholesale.”

When coffee is roasted locally, not only it is financially efficient, it also means that it is more “fresh,” he adds. Besides, it makes every coffee shop more unique in a way that “they experiment more, broaden their flavor palette and offer new tastes,” Pavel says. 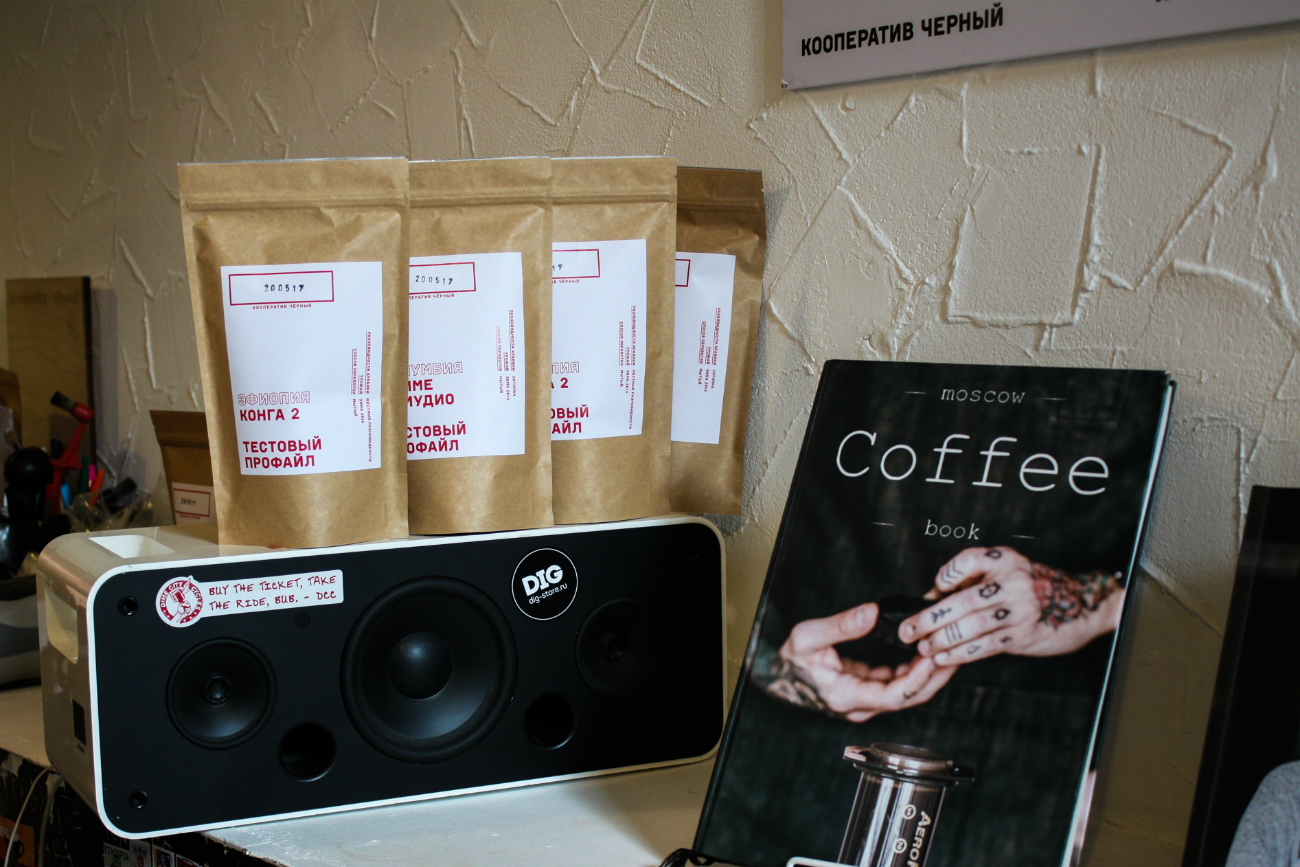 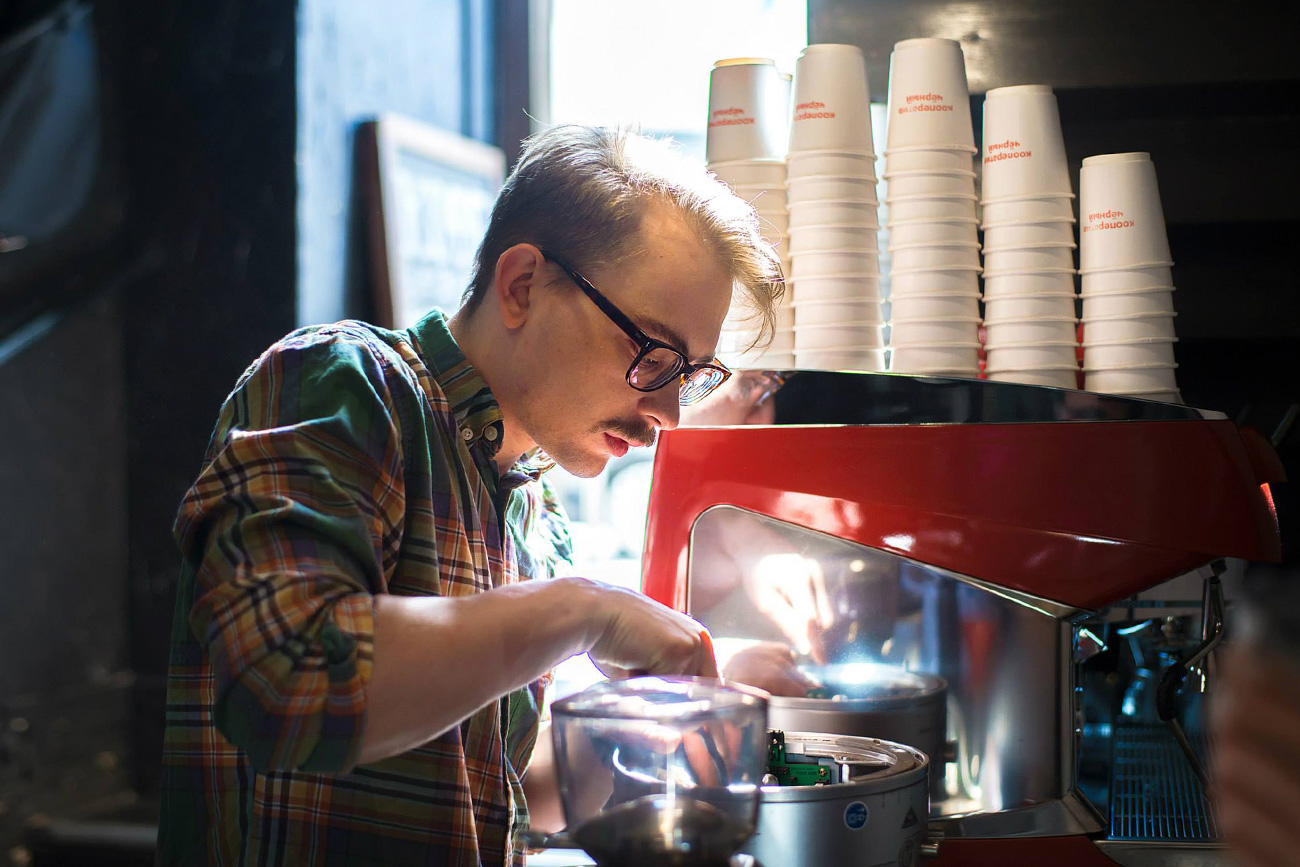 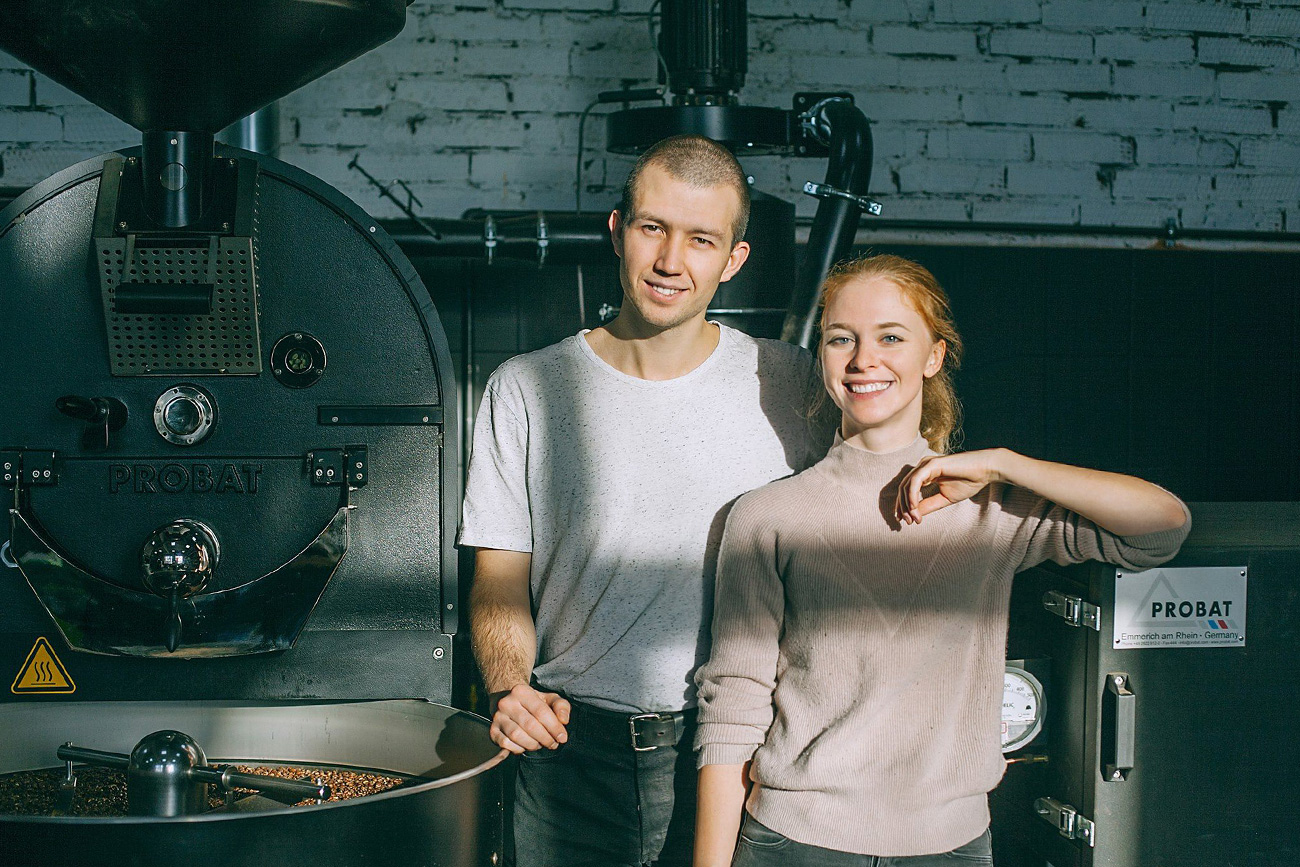 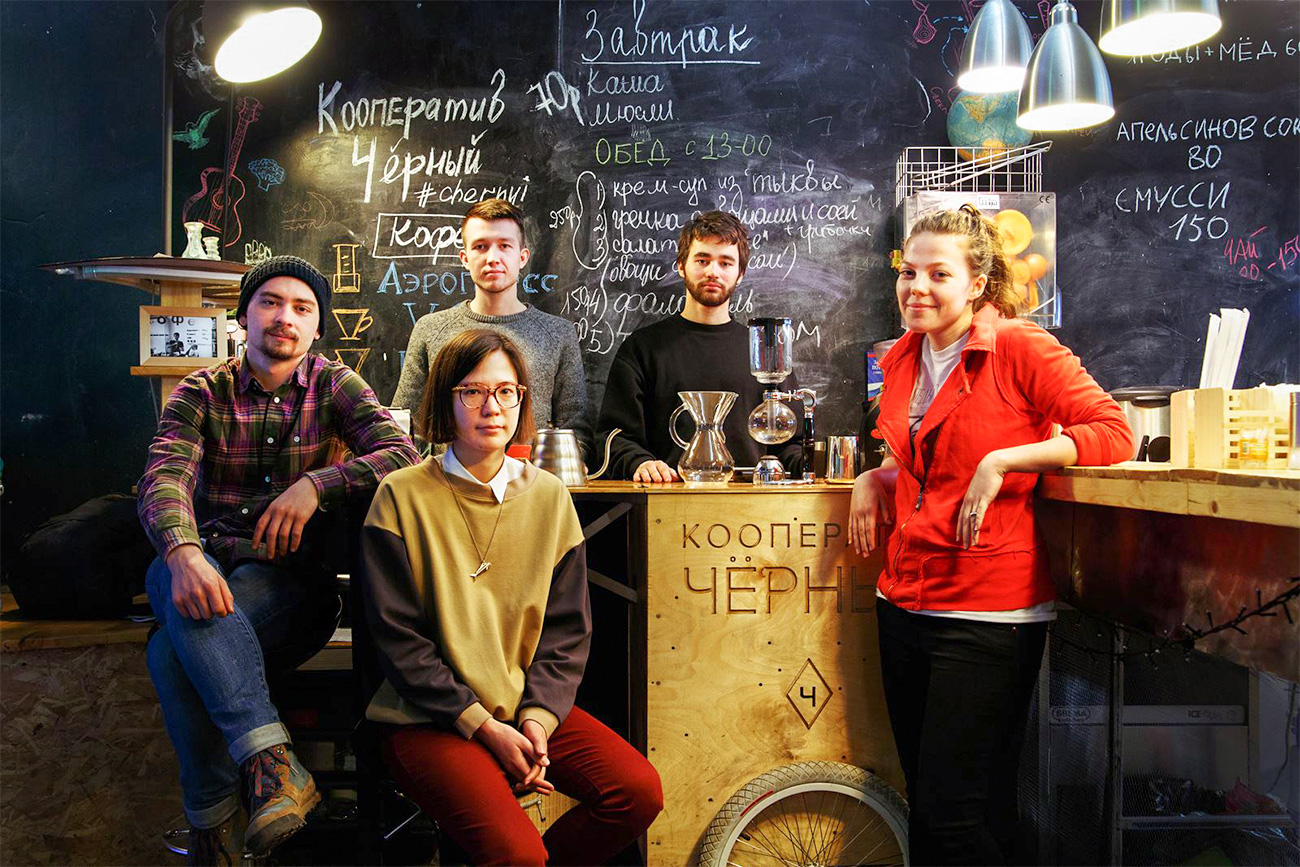 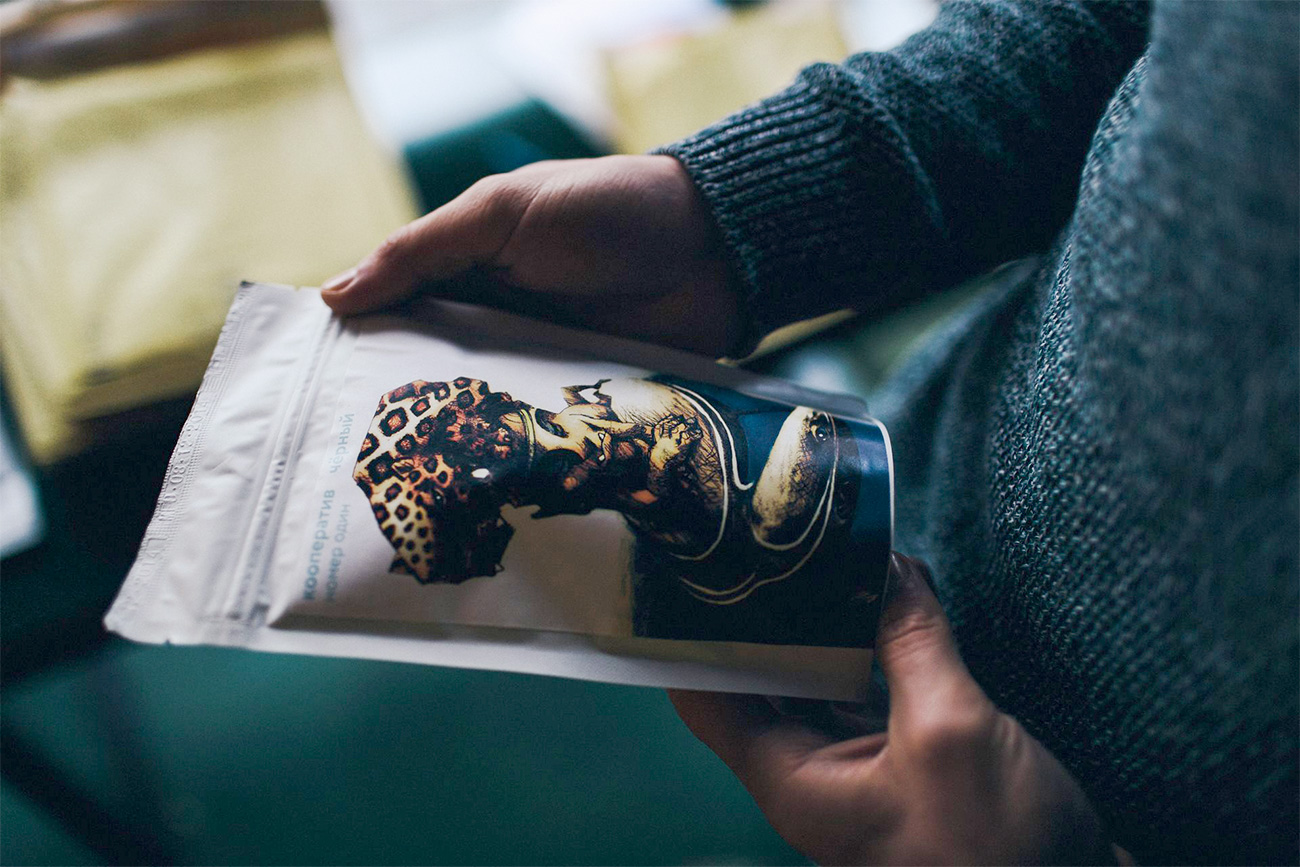 “We also don’t do mixes, only monosorts from specialty coffee that has over 80 points in international coffee standards,” he says. “It’s so weird to mix coffee from different regions, since you can over roast one sort and the taste can be different in every cup.”

“The ruble volatility has really affected us,” Pavel reflects. One kilogram of green coffee from a supplier costs about $8, while “logistics and goods taxes make it twice as expensive.”

Chernyi Cooperative undertakes many initiatives to educate people about black coffee. On the last Friday of every month they have so-called Black Fridays, where everyone can try black coffee for free.

Occasionally Pavel and Artem hold talks about the various aspects of coffee growing and production.

In an interview with the Inc website, Artem said that the members of the cooperative plan to write a book based on their previous educational campaign titled ‘31 Facts about Coffee.’

Chernyi Cooperative and DoubleB are one of the five Moscow coffee shops mentioned in the Third Wave Coffee Places map. The map includes coffee shops from all over the world, which are a part to third wave of the coffee movement. They aspire to produce specialty coffee, improve coffee plant growing, harvesting, and processing, and implement fresh roasting and skilled brewing.