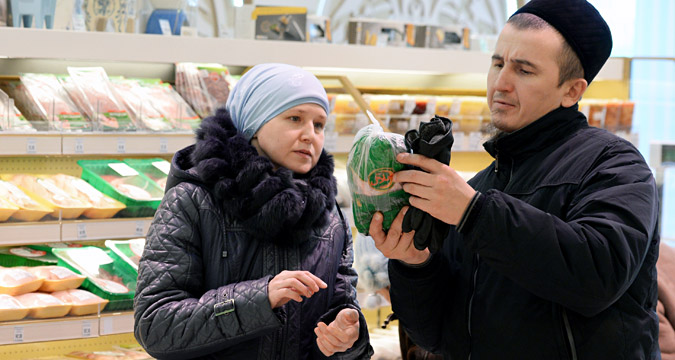 Customers in Bakhetle, the first Halal supermarket of Kazan, in Staro-Tatarskaya Sloboda.

In December 2015, Russia launched a program to encourage some hotels and restaurants in the country to comply with halal requirements.

The Halal Friendly Program was launched to coincide with the opening of the VisitRussia office in Dubai in the first week of December. Russian officials plan to use the program to attract more Muslim tourists to the country.

Irina Schegolkova, an official with the Halal Friendly Program, believes that Russian tourism authorities have not been paying enough attention to the Middle East.

“Tour groups from Muslim countries are expected to triple in the near future. The program will help attract tourists from the Middle East,” she says. “In the past, visitors from the Gulf mainly came on business, but now we intend to attract ordinary tourists. We want to show them the Russian winter, something that doesn't exist in their part of the world."

Visit Russia offices will be opened in Kuwait, Saudi Arabia and other Persian Gulf countries. Tourism authorities are planning to work with flydubai and Emirates to promote Russia as a tourist destination. Russia is also planning to organize familiarization trips for tour operates in Muslim countries.

The halal program will focus on Moscow, St. Petersburg, Kazan, Sochi and the towns of the Golden Ring. According to Schegolkova, these cities already have the infrastructure and hotels that can provide halal-friendly services. The list of cities will be expanded over the next few months.

“Earlier, the Russian tourism industry was oriented towards European and American tourists, but now more attention will be paid to tourists from Asia,” Schegolkova says.

In addition to cuisine from Russia’s Muslim regions and internal republics, the program aims to make halal-certified traditional Russian dishes widely available in the country.