Cherry vareniki: How to cook the essence of Russian summer

Russian Kitchen
Vasilisa Malinka
These are the juiciest dumplings you will ever eat - that’s a promise!

As a Russian child, the summer would really start for me when the cherries came into season. That’s when they are always on the table, ready to snack on. But then you eat so much that your tongue becomes red and you don’t want to see them anymore. As an adult, you try to control yourself so you can enjoy the full cherry season. Well, the best thing to do in this case is vareniki.  It’s an amazing way to preserve cherries throughout the winter and also a great reminder of the summer days on cold winter evenings. 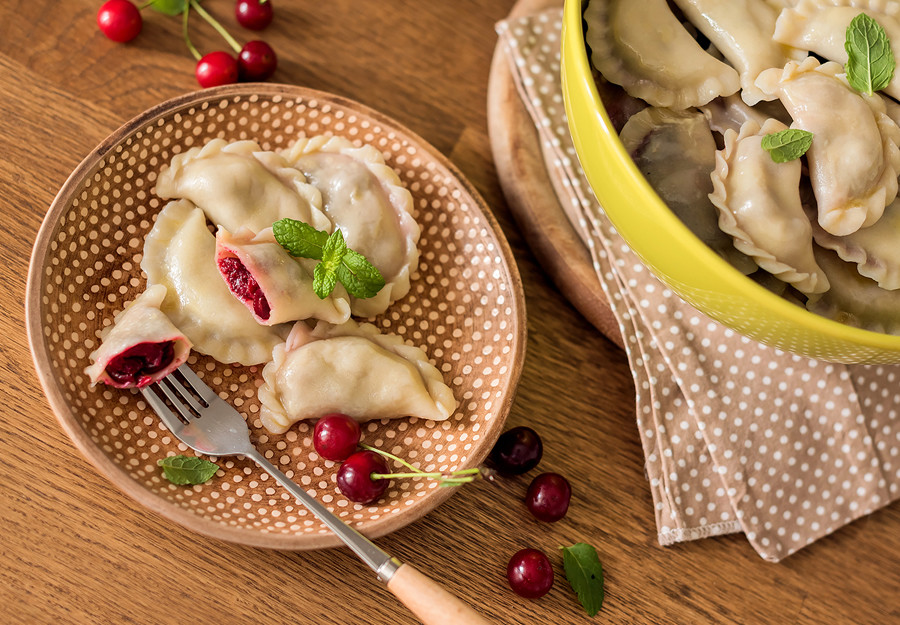 Vareniki are Russian dumplings/ravioli but what really makes this recipe special is that they are sweet and very hearty, but at the same time light and juicy because off the cherry filling. It’s that unique time when you can have something sweet as a main dish.

There are always arguments about where vareniki come from. The common version is that all dumpling typed food originated from China. Then there is a version that vareniki developed from Turkish food called dush-vara – different stuffing covered in dough and boiled. After that the word dush-VARA was separated and became VAReniki as some sources say. But also, the word “vareniki” simply means cooked in water in Russian. No matter where the dish came from it’s become a favorite Russian speciality.

Vareniki is not a very complicated dish to make, but there are actually a few secrets that you should know according to William Pokhlyobkin – the best known Russian food writer of 20th century. One of them is very simple but it will make a big difference: When your vareniki is cooked, drain the water, and maybe even put the dumplings back in the pot - since it will still be hot it will help all the excess water evaporate. That simple step will make the sour cream or syrup stick to your vareniki, and off course it will make big difference to the taste.

The famous writer Nikolay Gogol appreciated food very much and mentioned vareniki in one of his tales called The Night Before Christmas. Gogol loved mystery so in this story the vareniki come alive, taking a dip in sour cream before flying into the character’s mouth. I think Gogol also knew the secret of letting vareniki dry because of the way he describes them almost taking a bath in sour cream.

Now that you also know this simple trick try to make them yourself. I can’t promise that they will fly straight into your mouth but I for sure know you will enjoy them.

Start by pitting the cherries. Place the pitted cherries in a bowl and add the sugar. mix them a little and set aside for one hour. This process will draw out moisture from the cherries which we will use later. 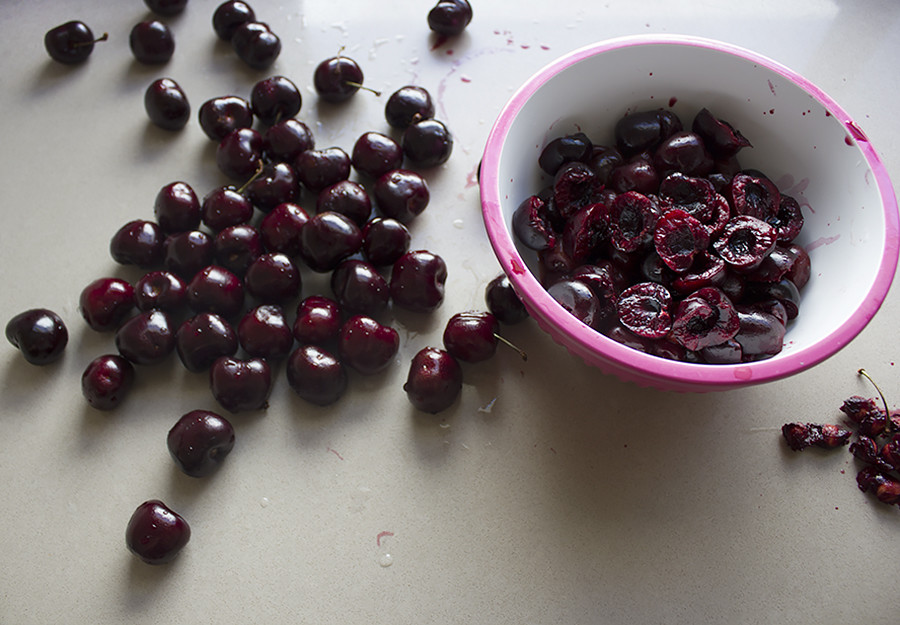 Make the dough: Warm up the water and butter together, mix your flour with salt, and dump on a clean work surface or table. 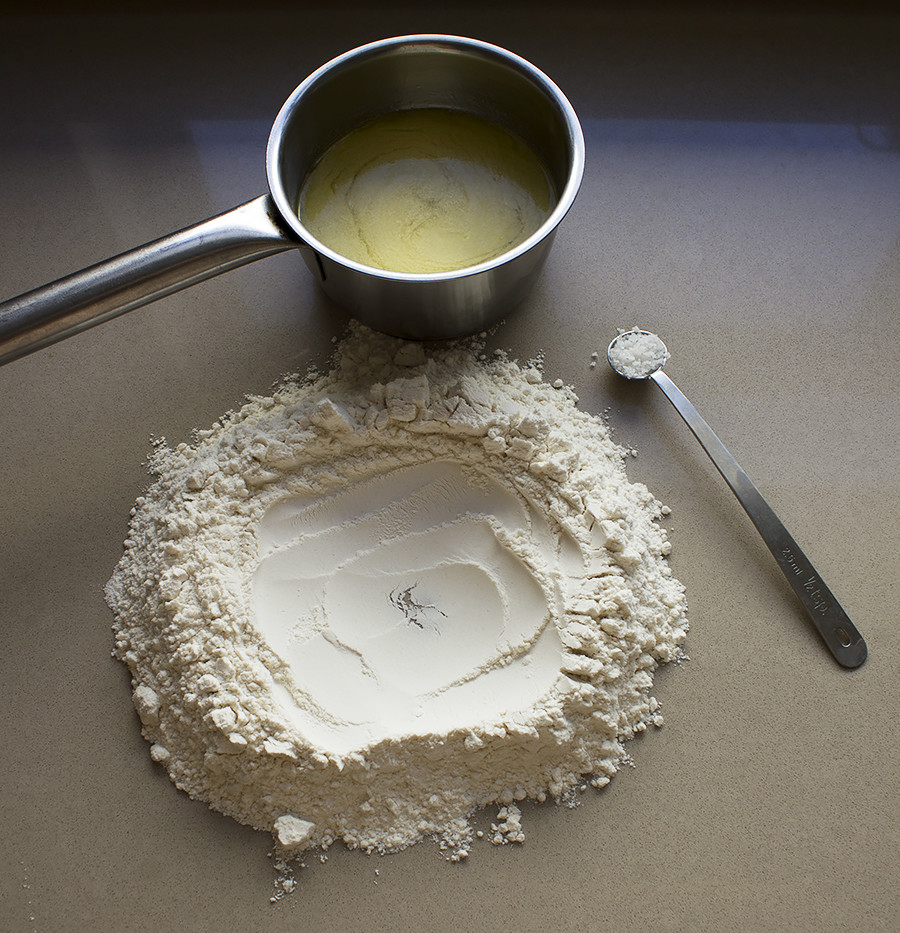 Make a flour well/crater and pour your water mixture into the center. Carefully, start mixing by hand making sure you incorporate the flour little by little, until you get a shaggy dough. 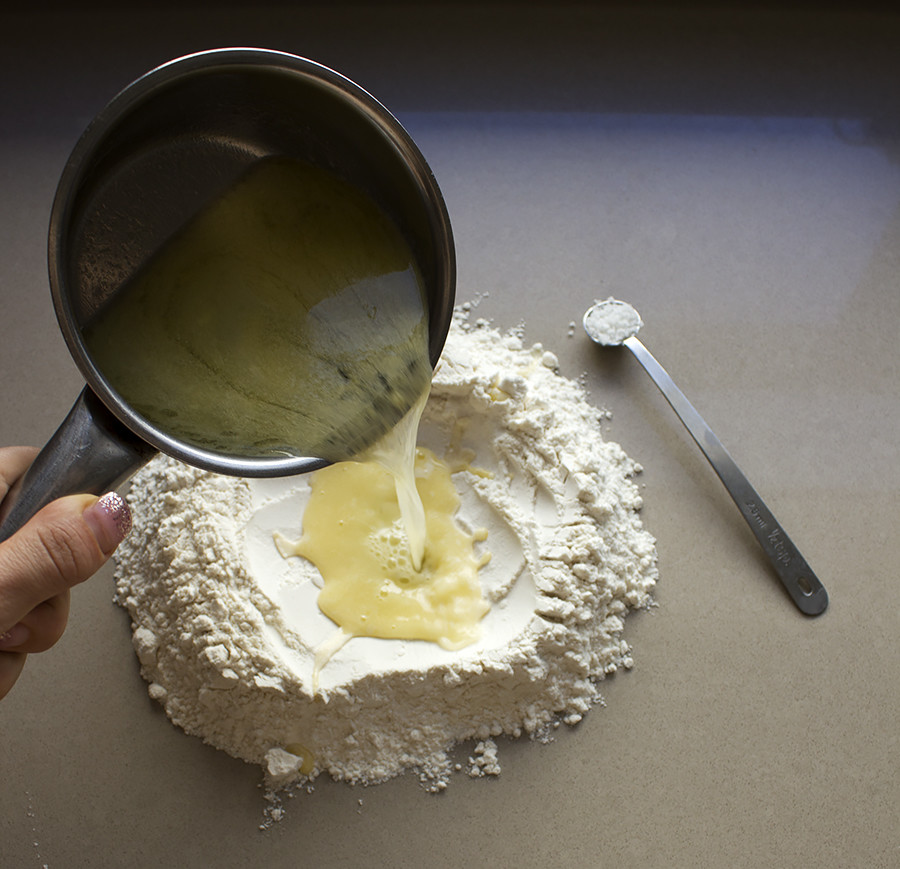 Now you can start kneading the mixture for about five minutes. You’ll notice your dough will become very soft and silky smooth. Wrap it in cling film and leave to rest on the table for one hour. 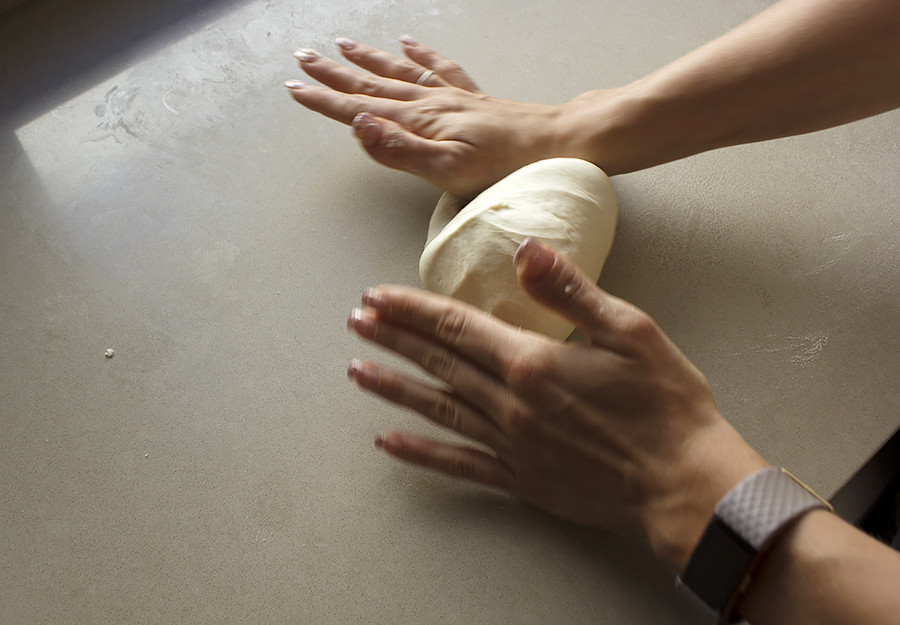 By the time an hour passes your cherries will have had released a lot of juice. Drain them nicely, and keep the juice. 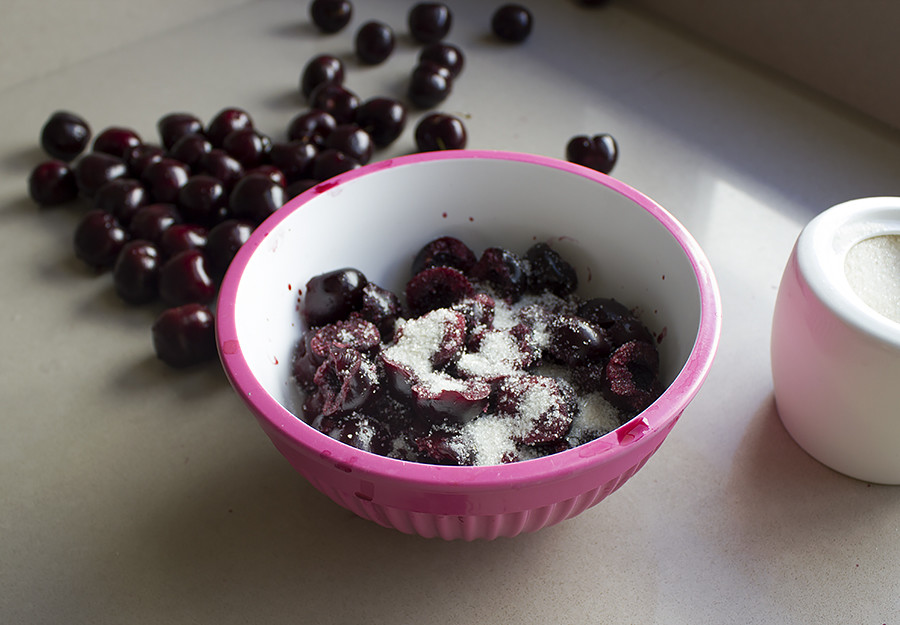 Once your dough has rested, get your rolling pin, sprinkle your work surface with flour, and start rolling the dough. 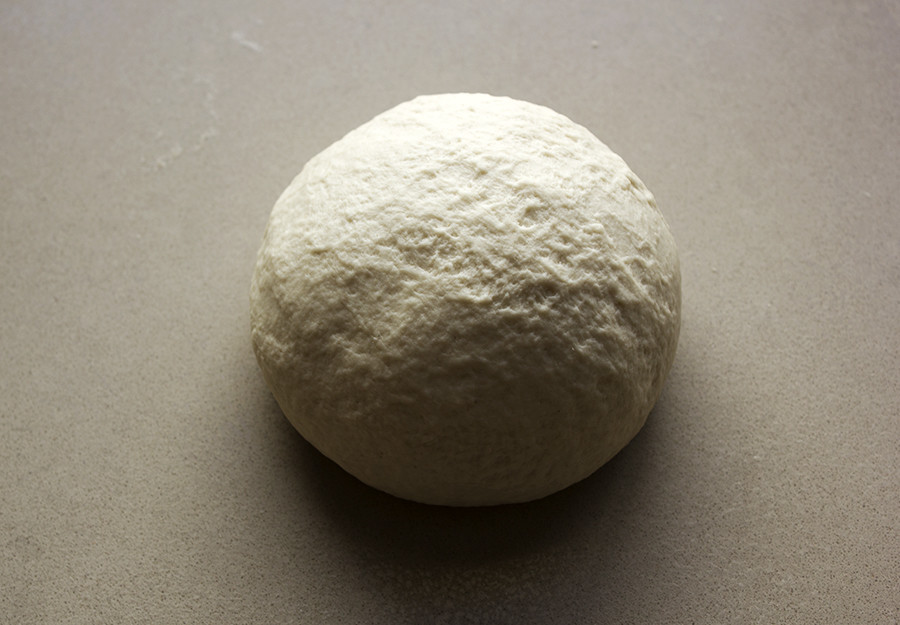 It is easier to separate it into two parts before rolling. Get it to a thickness of about three mm and cut out circles with a round cutter or a cup. 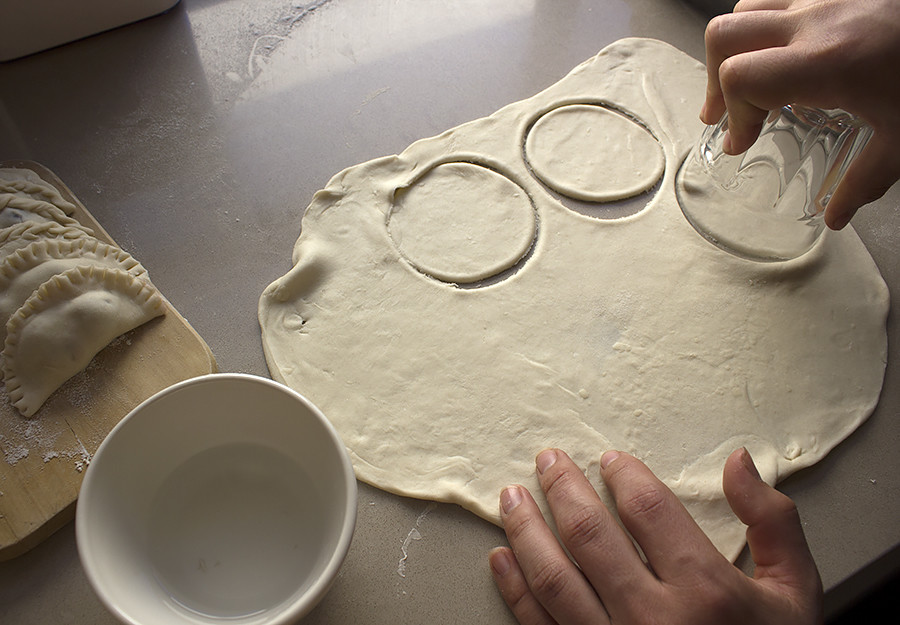 Lets fill them. Place the circle of dough on the palm of your hand, in each circle put about one tsp of drained cherries, wet the edges of the dough with a little bit of water (just enough for it to stick) and fold it into half-circle. 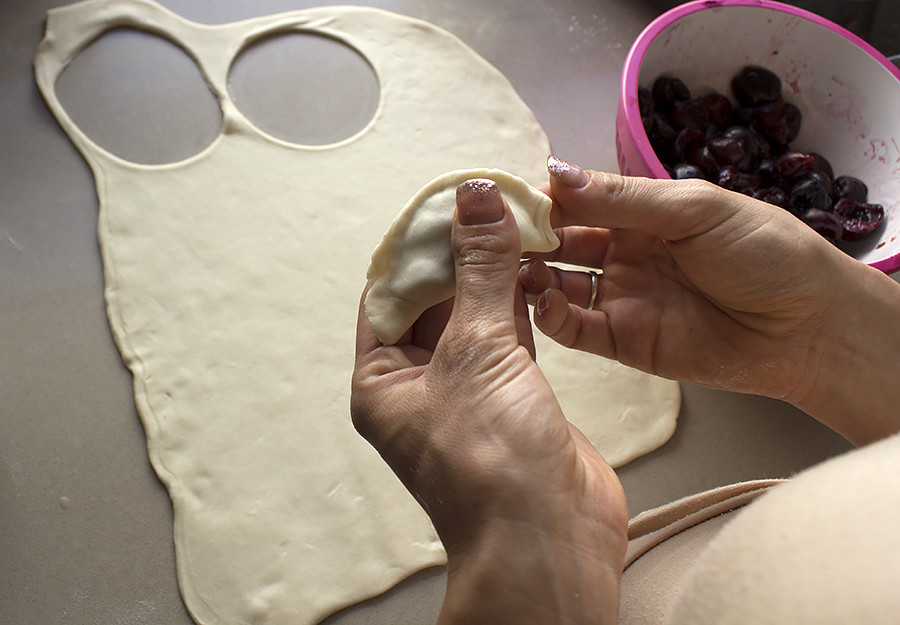 Now you want to make sure the filling doesn’t spill out. Pinch the edges together with the help of a fork to create a seal. You can also try the traditional way, which involves folding the dough crease after crease creating a braided pattern. This technique takes a lot of practice, but once you master it you’ll be able to call yourself a real Russian craftsman. 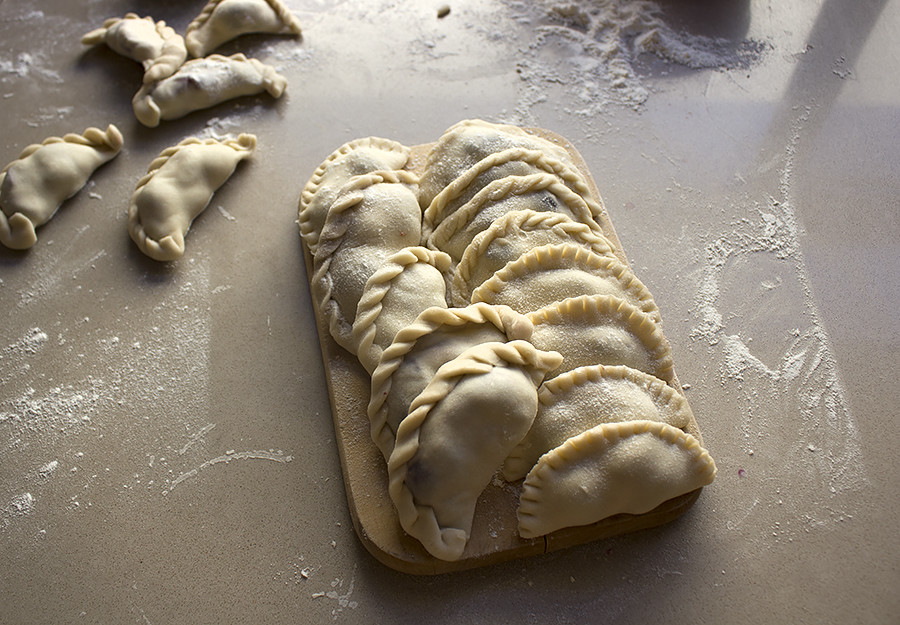 Make sure your surface is sprinkled with flour, so when your vareniki are done, they don’t stick to each other. Now you can either freeze them or cook them right away.

To cook vareniki, get a pot with water ready. Once the water is boiling, add a few pinches of salt and carefully throw in your vareniki. Stir the water carefully, so they don’t get stuck to the bottom of the pot or each other while cooking. 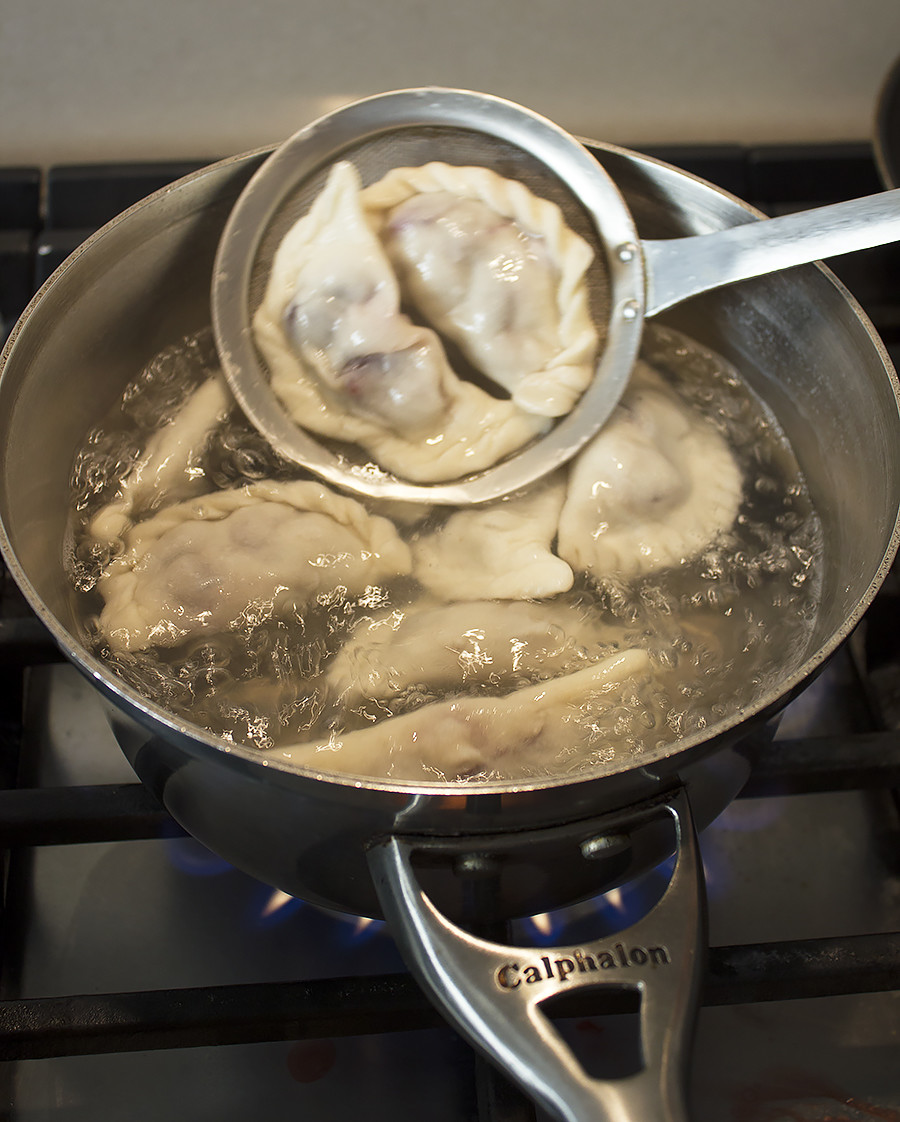 When your dumplings start floating give them one to two more minutes and then drain the water. Keep them in a hot pot for a few minutes to help them dry a little.

Now remember that juice from the cherries? Heat it in a small pot and reduce to a syrup.

Just make sure you put a nice big spoonful of sour cream on top and sprinkle with your cherry syrup. 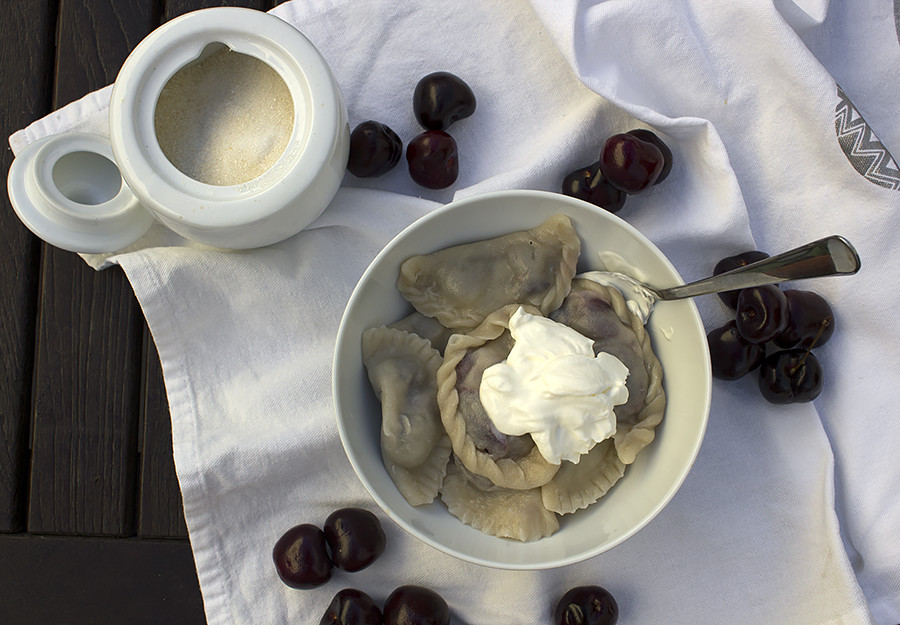 Real, filled vareniki take a long time to prepare, so here we offer you a simplified “lazy” recipe.