10 facts about the Russian samovar 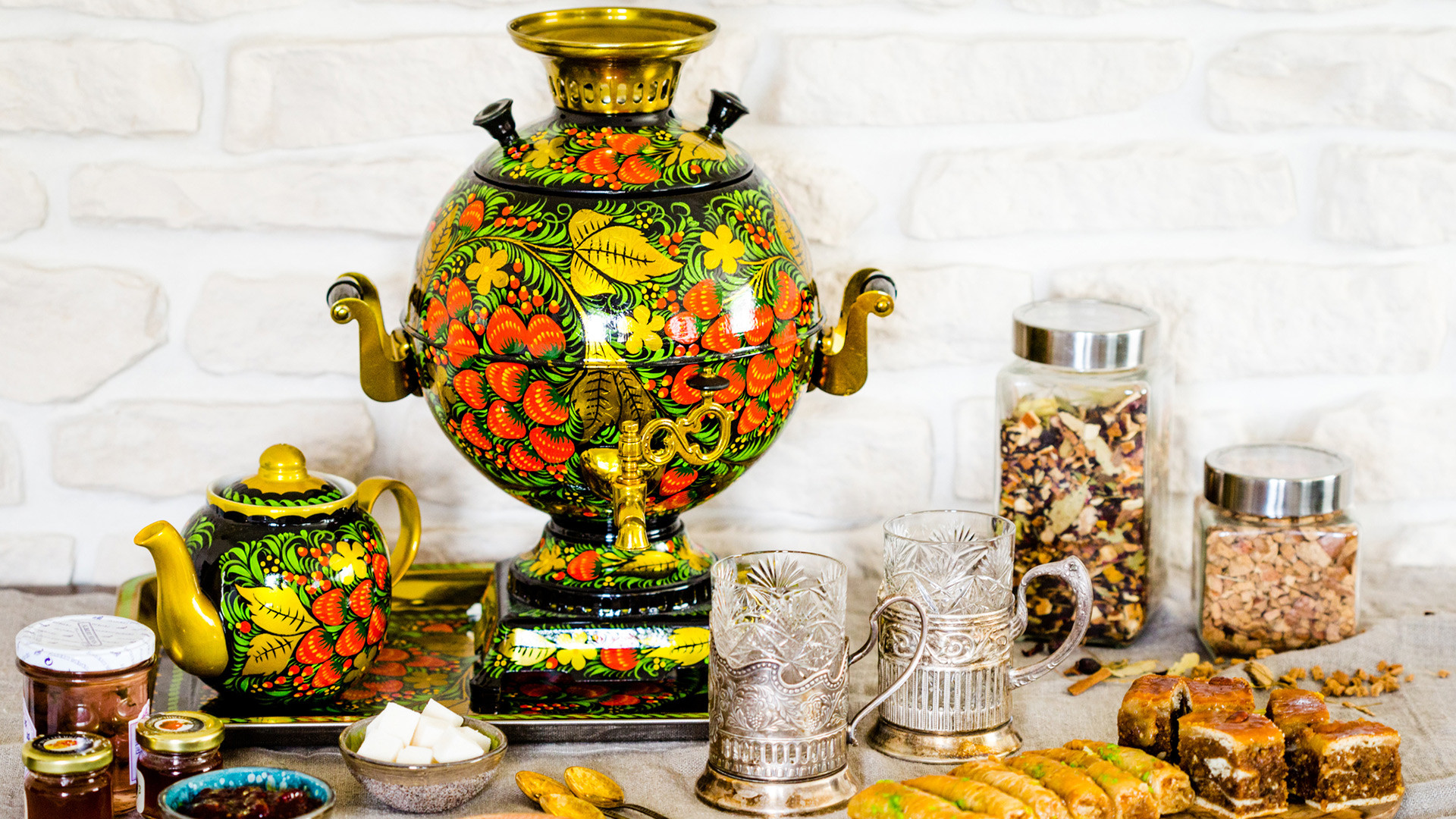 Legion Media
In its nearly 300-year history, this Russian "kettle" has metamorphosed from an expensive household item and family heirloom into an object hidden away to collect dust during the post-Soviet period, and then, once again, to be popular today when Russians get together for a cup of tea and a chat at their dacha.

Alongside the Tula pryanik, the samovar is regarded as one of the most distinctive brands of the city of Tula (180 km south of Moscow), where it has been mass produced since the end of the 18th century. Historians found the first mention of the "water-heating machine" in documents dating to 1740 - a copper samovar was manufactured at the Demidov Manufacture in the town of Suksun in the Urals. 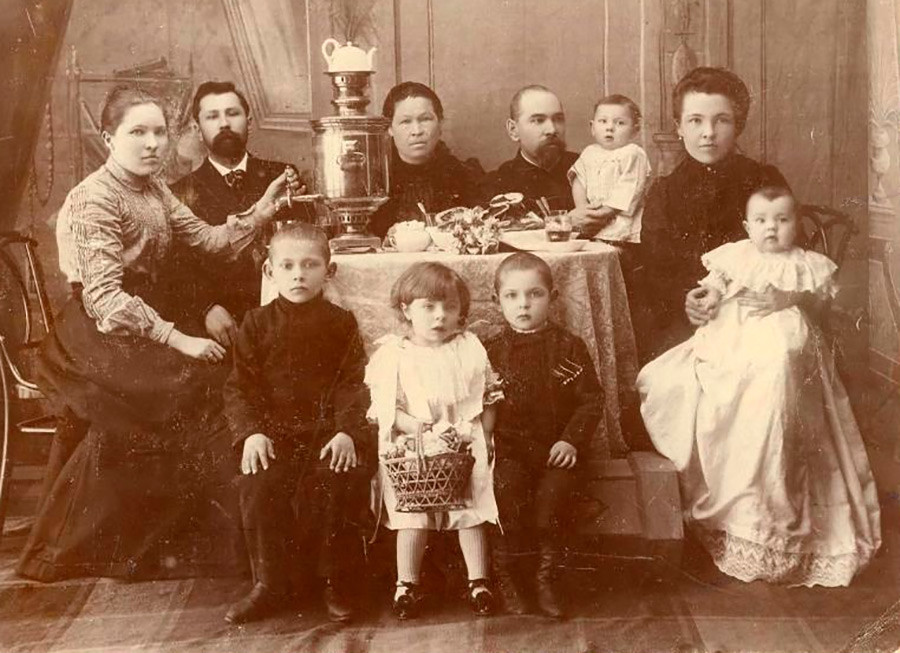 The original samovars burned solid fuels, and had a pipe and burner. Any type of fuel was used for heating the water: coal, wood or pine cones. Pine cones burn quickly but they add an aroma of pine needles to the water. Today, pine cones are added to the fuel only when the water is about to boil. 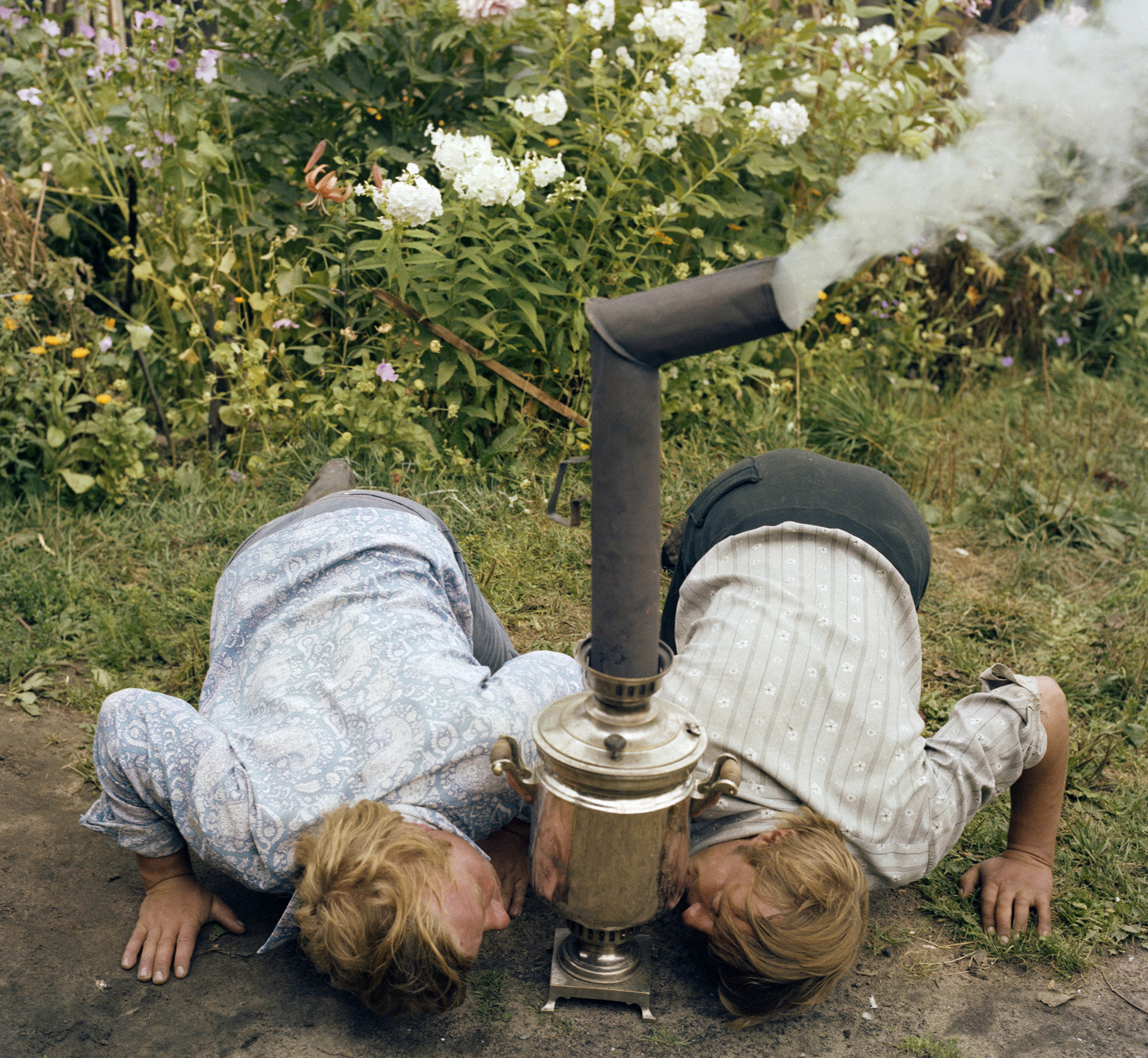 3. Samovars are polished with bricks

A samovar will have a pleasing shine only when it is well polished. In the past, samovars were cleaned using abrasive materials - fine wet sand or ash. Even brick dust was used. It takes a long time to polish a samovar, so usually it was done before the holidays. 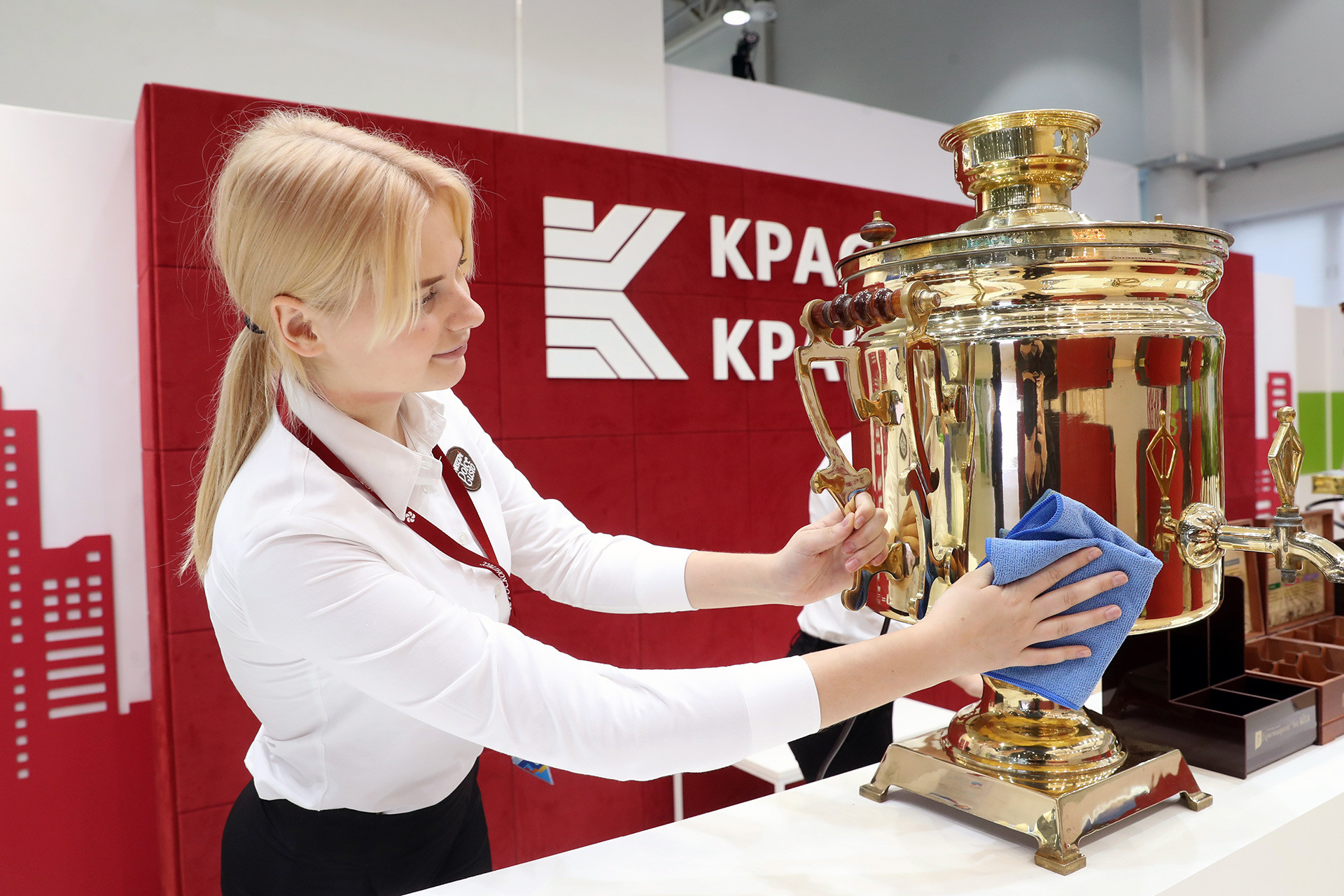 4. There are several dozen types 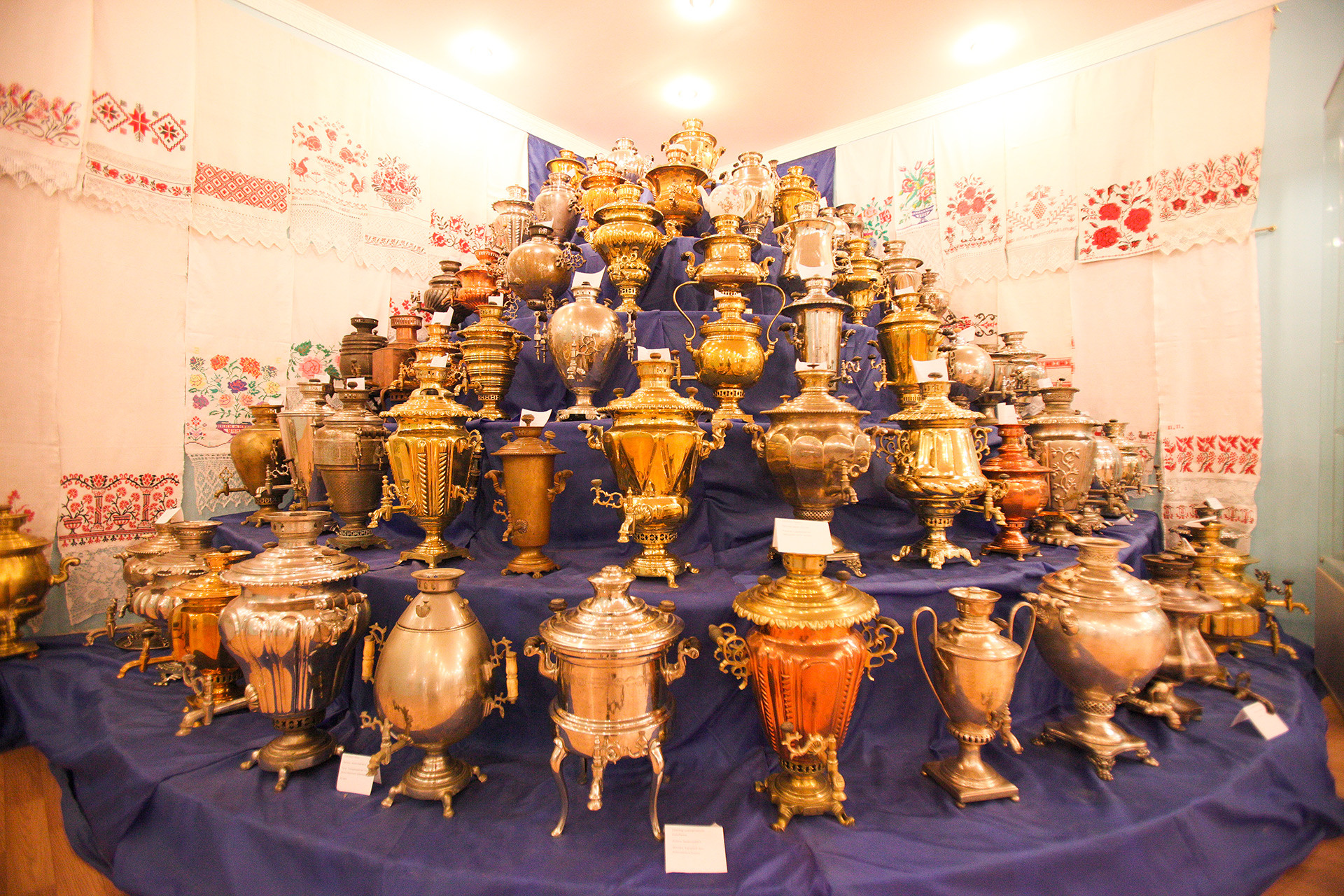 Samovars differ not only in the design of their handles and taps, but also in shape. The cheapest and most popular ones are the cylindrical variety. Then there are samovars shaped like a vodka glass, sphere, vase or egg. The "vodka glass" samovar is narrower at the base, with different variations. Some samovars were made in the shape of a gun barrel or a bullet, and were rounded at the base; there were also samovars as round as watermelons, or pear-shaped, or shaped like a valenok [traditional Russian felt boot] or different animals. During Easter Week, egg-shaped samovars were put on the table. Also popular was a samovar used for traveling - rectangular or square in shape with detachable legs. 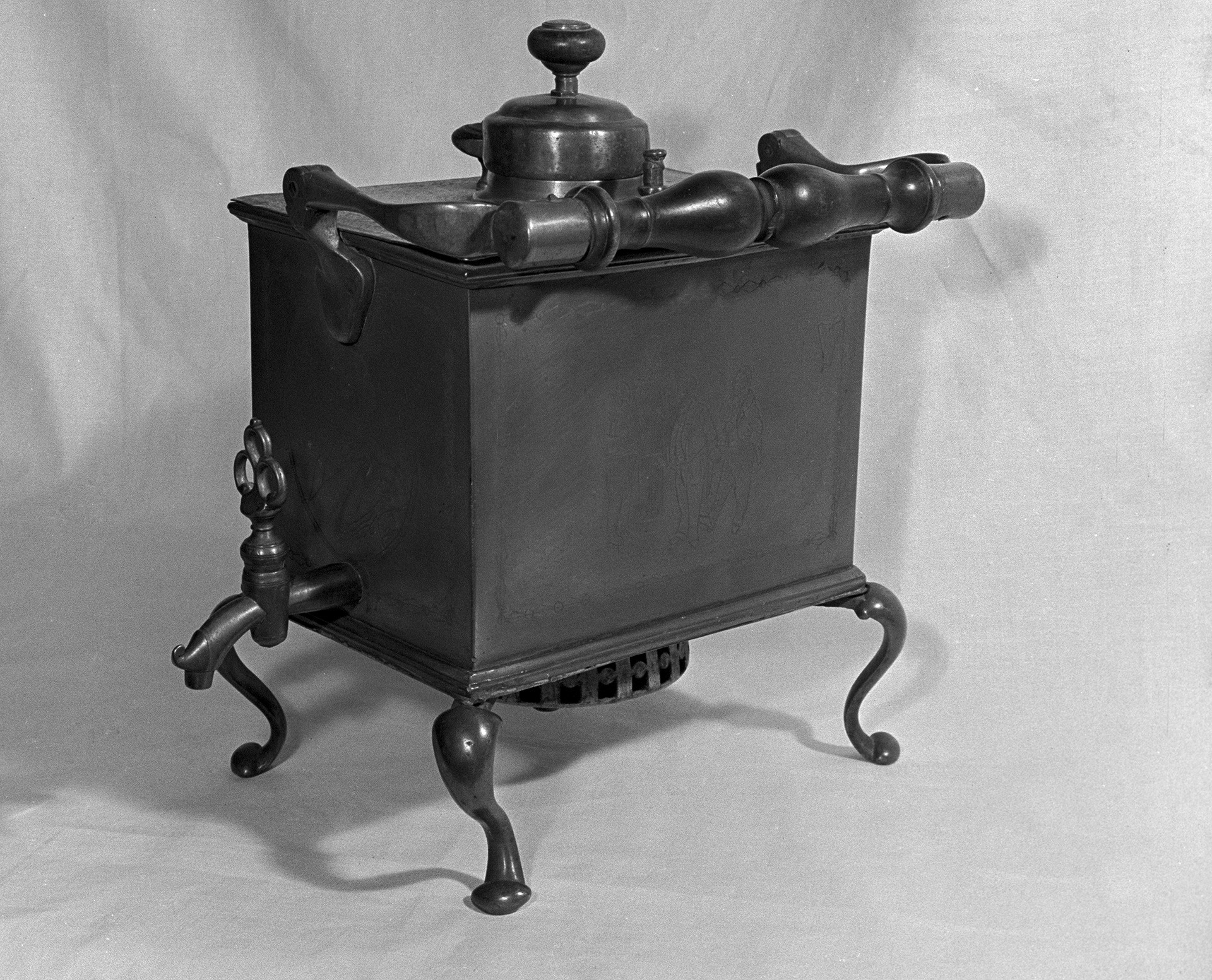 5. They were sold by weight

In the early 19th century the price of a samovar depended on the weight of the material it was made of. At first, they were made of copper, but these tended to stop working soon after being cleaned. So the craftsmen switched to brass, cupronickel and pinchbeck.

The weight indirectly indicated the quality of the samovar: thick walls last longer than thin ones; the water inside is slower to cool; and the body of the samovar acquires fewer dents. 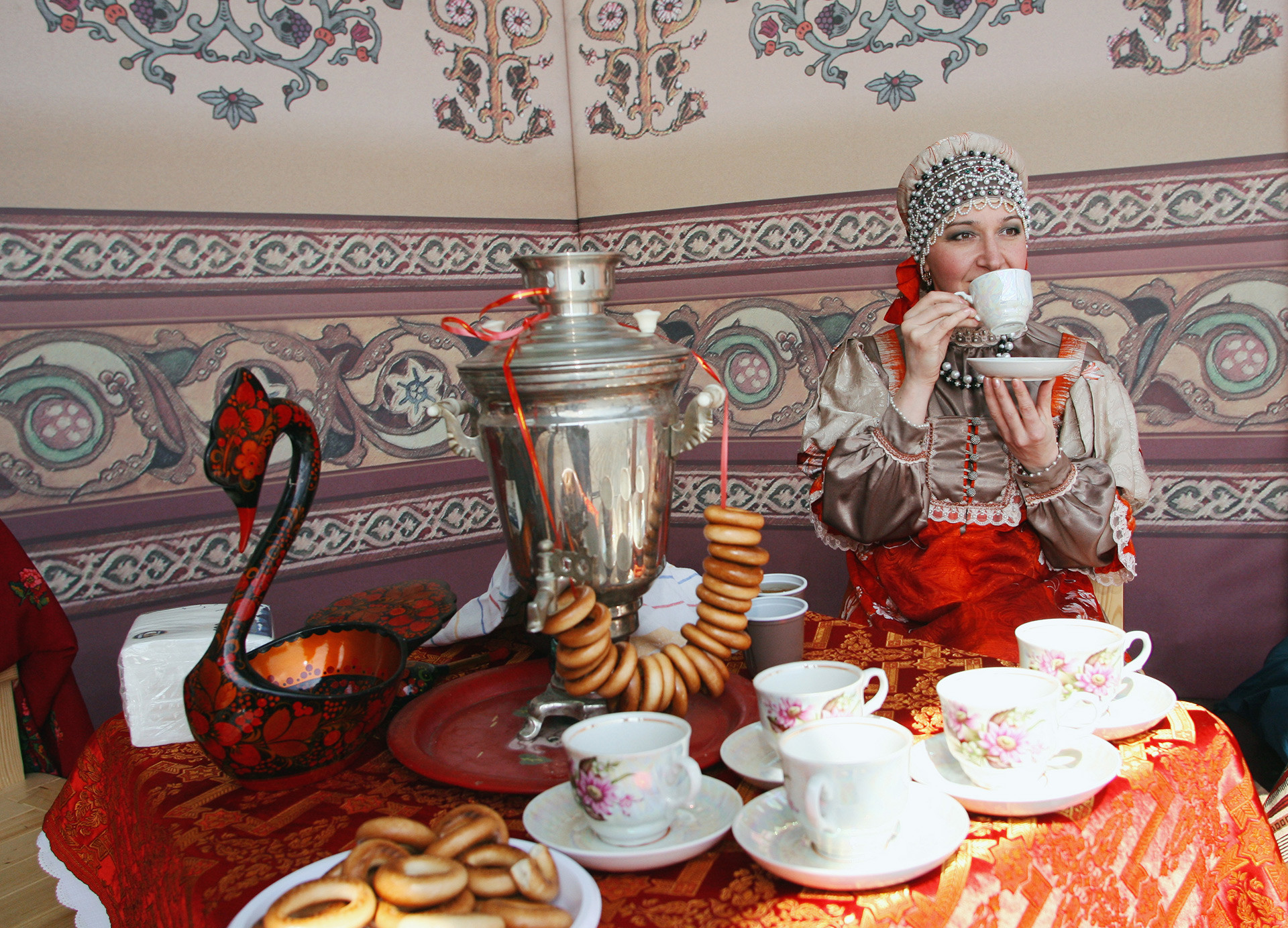 6. There were samovars for egoists

The most common capacity of a samovar is 3-8 liters. Smaller ones are rarer as they are more difficult to make and consequently more expensive to buy. Samovars for one glass were called "The Egoist;" and for two, "The Tête-à-tête."

The children of Nicholas II had five one-glass samovars made for them in 1909 by craftsmen from Tula. Each had a unique design, and they can be viewed today at the Tula Samovar Museum. 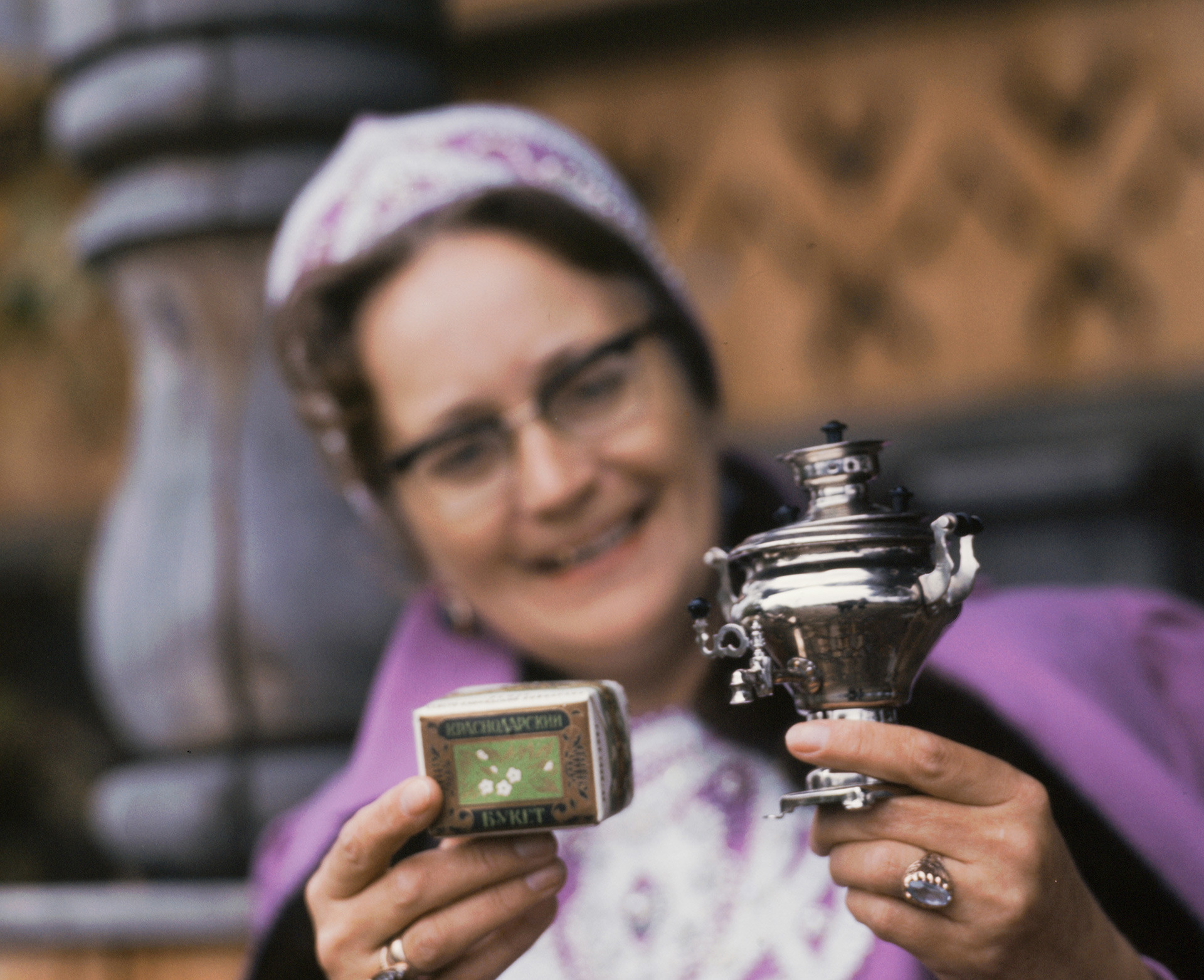 The biggest working samovar in the world has a capacity of 555 liters of water, and can provide refreshment for 2,220 people at a time. Its height is 2.5 meters with the exhaust pipe attached, and 1.72 meters without. It was made in Perm in 2014 by Alexander Novokshonov using stainless steel, and it’s entered in the Russian Book of Records. 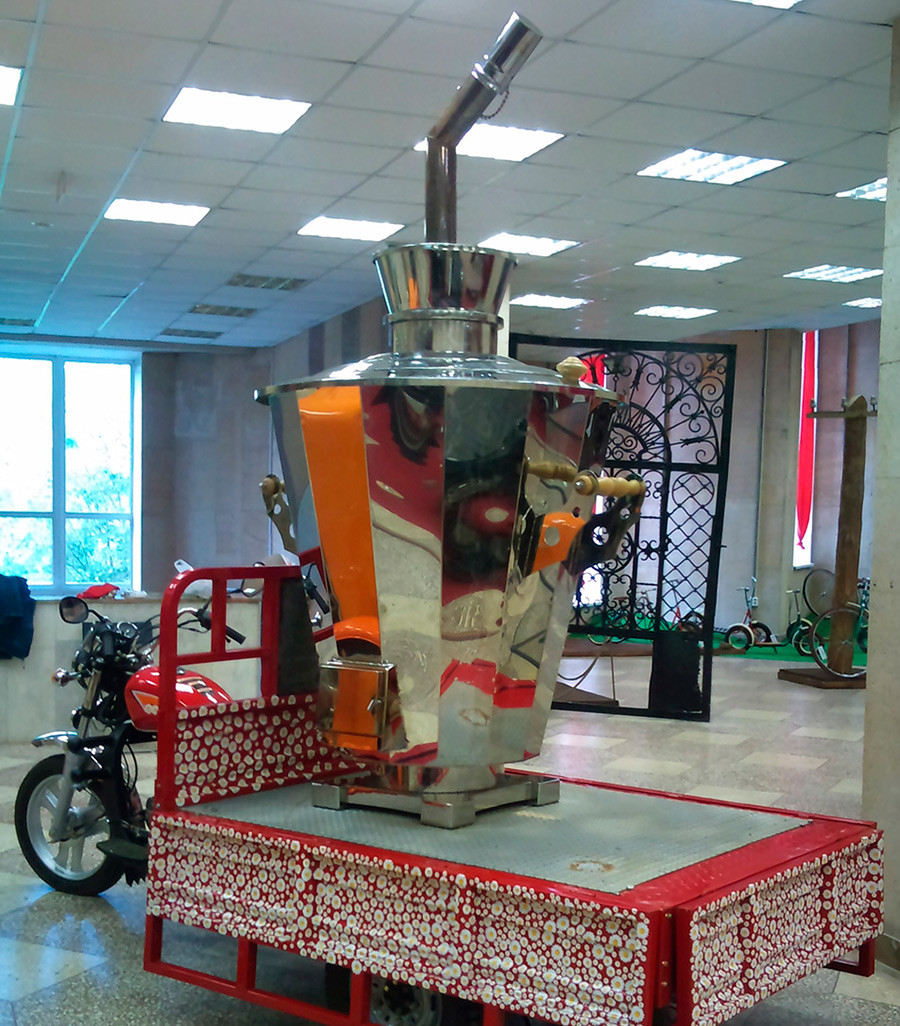 This was the amount that one sold for at a Sotheby's auction in London in 2004. This pure silver samovar, crafted in the form of a forest sprite (Leshiy), was made in 1899-1908 by the legendary jeweler, Carl Fabergé. The body was covered with cast elements, and was shaped and chased. The buyer was a wealthy Russian collector. 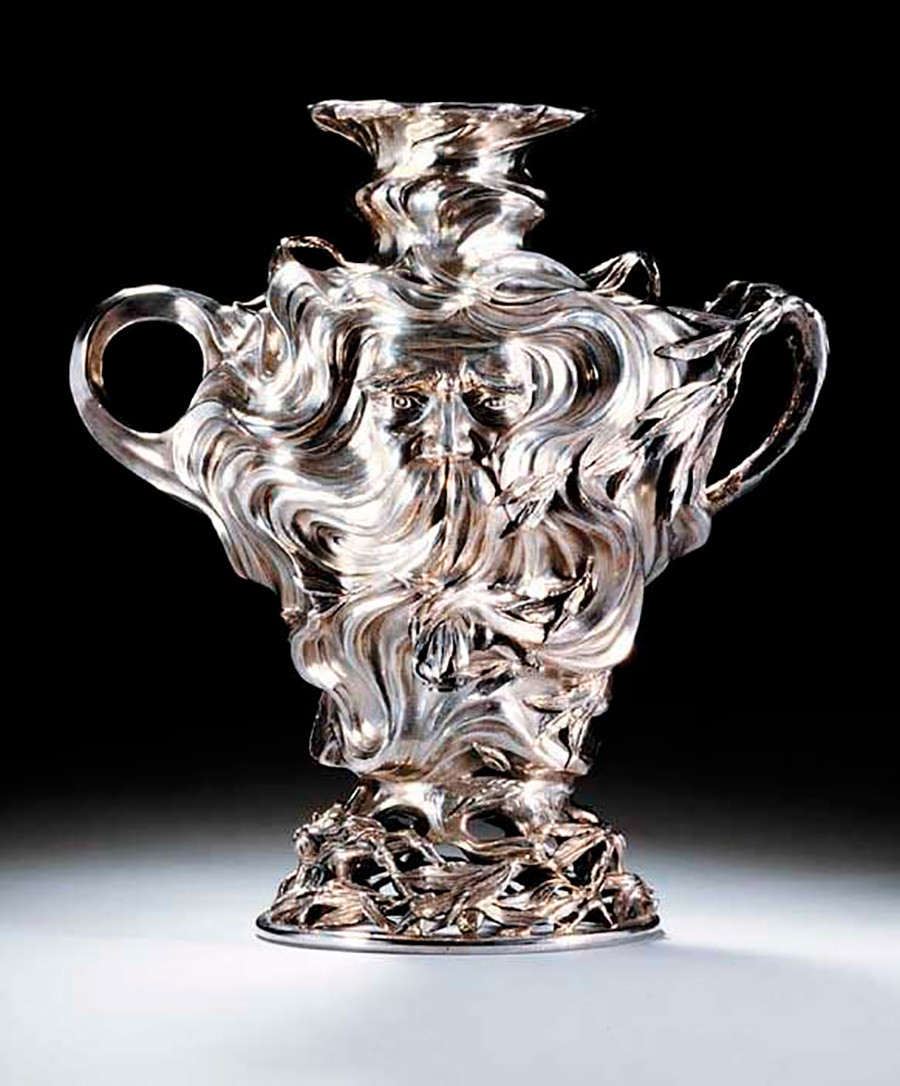 Monuments can be seen in the home of the samovar - the town of Suksun in the Perm Region, and, of course, in Tula. A magnificent four-meter bronze specimen with a bundle of bubliks, (Russian-style bagels), was erected in the former merchant town of Yelabuga.

There are also monuments in Kungur (1,200 km from Moscow), a town regarded in the 19th century as the tea capital of Russia, in Gorodets (Nizhny Novgorod Region) and Mytischi (Moscow Region). 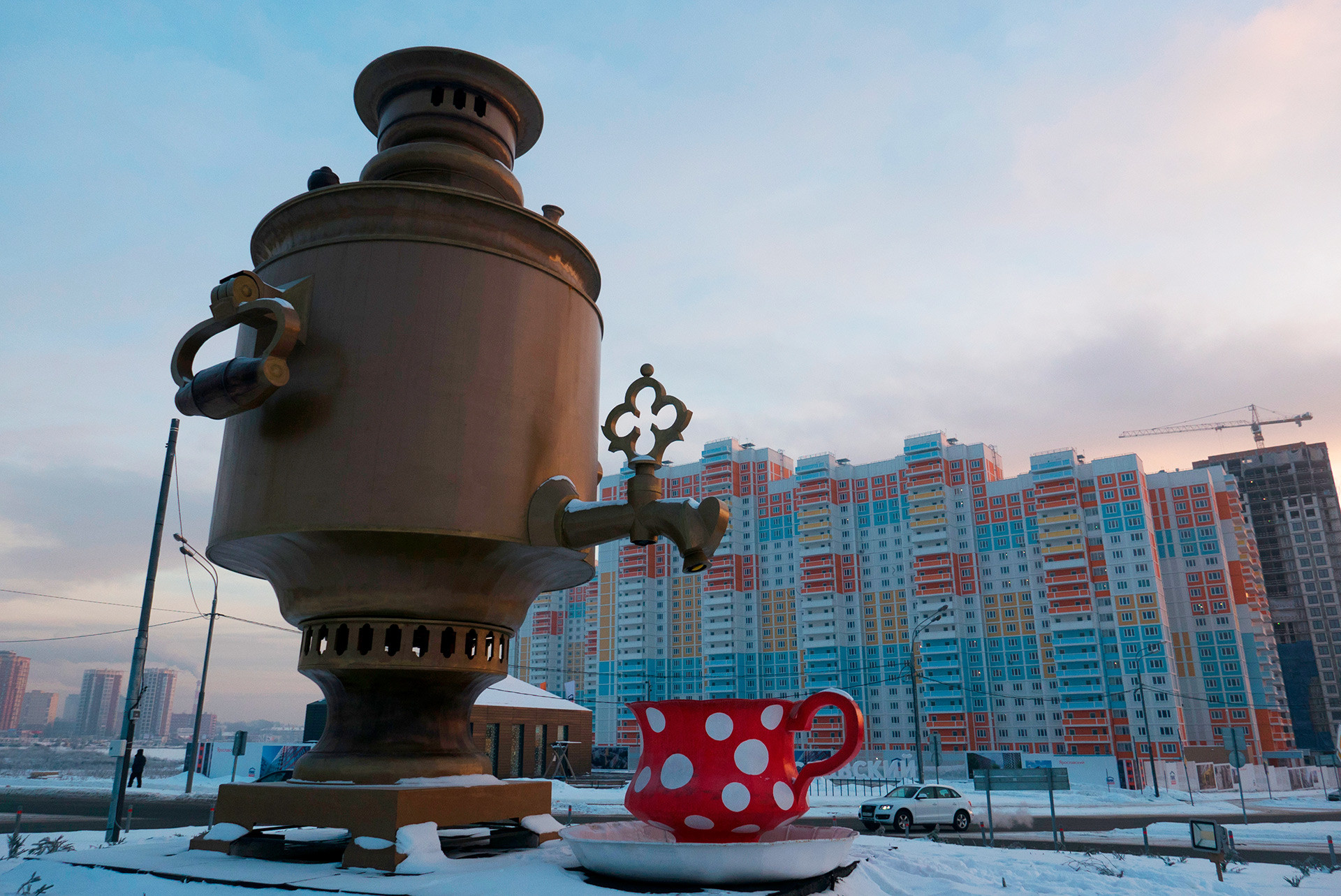 The eight-meter sculpture of a samovar in the city of Mytischi, Moscow Region.

From the moment of its invention the samovar found an enduring place in Russian art - it was and remains the most attractive household accouterment, a symbol of well-being and domestic comfort. Immortalized on the canvases of many artists, and later in photography, today it’s actively employed by Instagram users.

Read more: Why did Russians decorate their homes with baranki