Ever try a pie with “Siberian pineapple”? 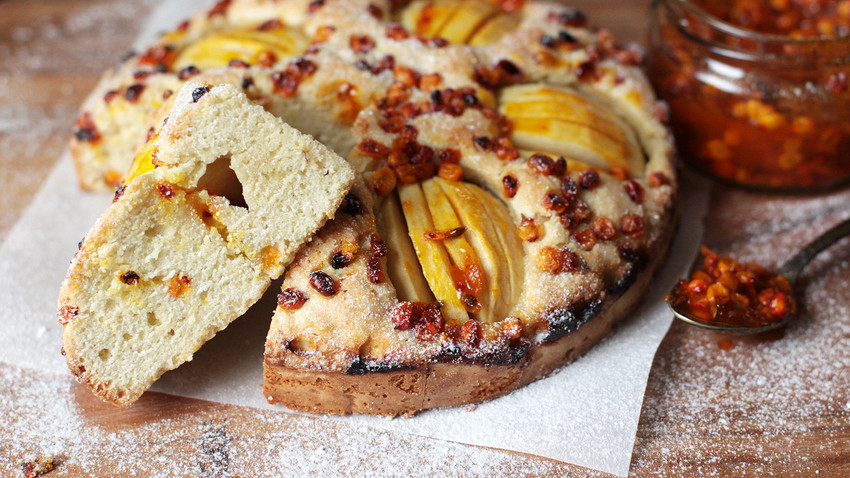 Victoria Drey
This easy Russian-style delight with sea buckthorn is hands down the tastiest cure from the autumn blues.

I always considered sea buckthorn to be a quintessential Russian berry because of its allegedly Siberian origin. Indeed, many believe that Siberia was one of the first regions where sea buckthorn was found, along with North China and Mongolia. Some Russians even call sea buckthorn “Siberian pineapple” because of its unique taste and flavor, which slightly resembles tropical fruit. However, for the longest time sea buckthorn was used only for medical purposes, and people had no idea about its outstanding culinary qualities.

My grandmother remembers that in her childhood nobody really took sea buckthorn seriously, and she first heard about it not as a delicious berry, but rather as a healing oil. In the 1980s Soviet women were literally hunting for the essential sea buckthorn oil that was considered to be the cure for all the possible ailments. It was pricey and sold only in a few pharmacies. Moreover, only those who had a special medical prescription could got their hands on it. After the essential oil boom sea buckthorn became more popular, so they started using it in cooking much more often.

For some reason sea buckthorn was not widely cultivated in the USSR, which is why there are not that many Russian recipes with this berry. The most common and traditional are sea buckthorn varenye, or jam, and mors – a rich berry beverage. As for me, sea buckthorn is my all-time favorite berry, so I often add it while cooking desserts, sauces and pastry. Apple-sea buckthorn pirog must be one of the most delicious autumn-style pies: the piquant sourness and tartness of seasonal apples and sea buckthorn coupled with soft and airy cake give this pastry an astounding taste and flavor.

1. For the batter, first whisk eggs with sugar and a pinch of salt for 3 minutes – you better use a mixer so that the batter is more airy and smooth, but a regular hand whisk will work as well. 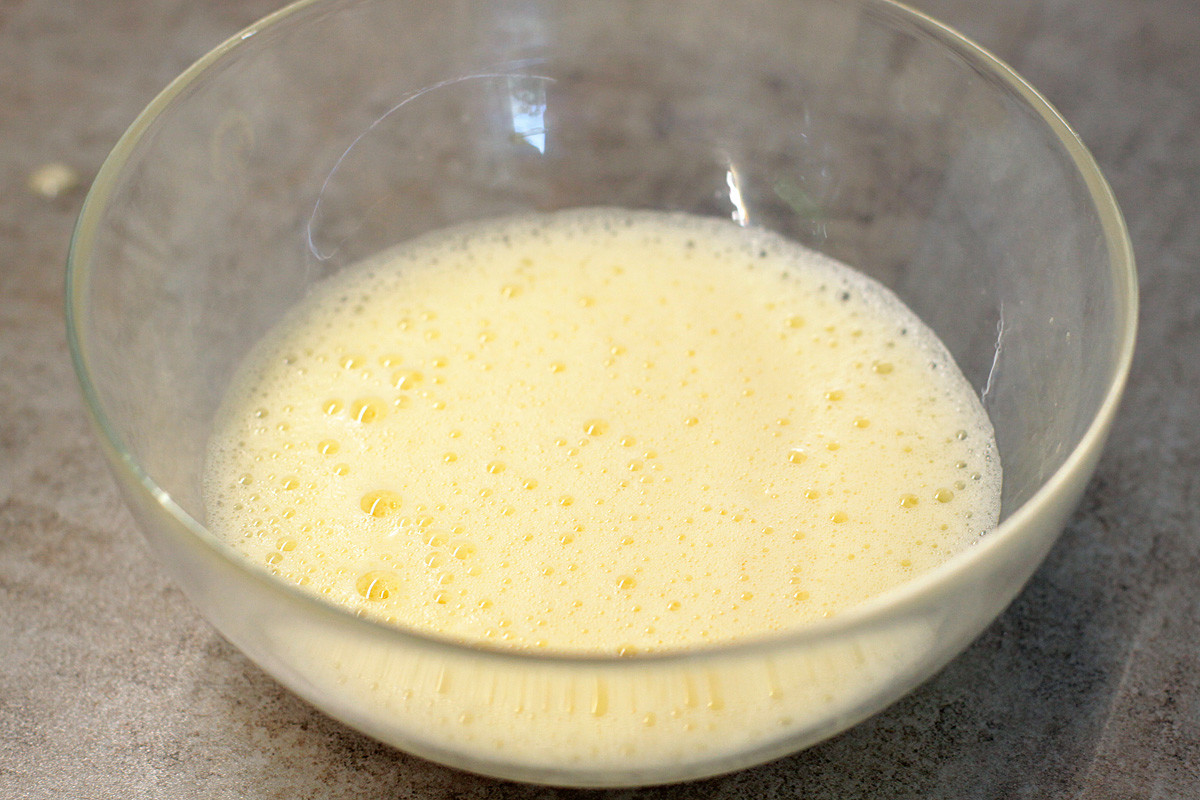 2. Whisk until all the sugar grains dissolve and the mixture becomes whitish. Next, pour in any flavorless oil – I use a mixture of sunflower and olive oils – and mix again. 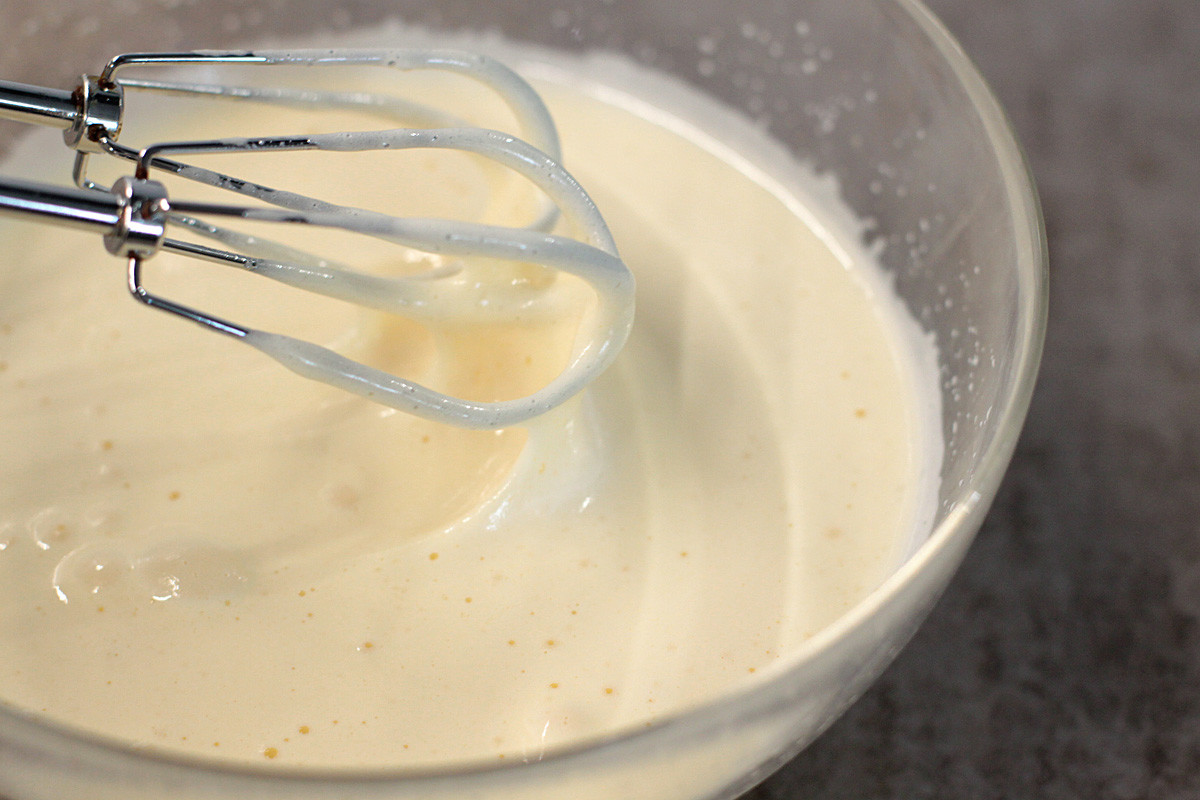 3. Sift the flour with baking powder and cinnamon, and stir until the batter is smooth and silky – it should be quite thick. 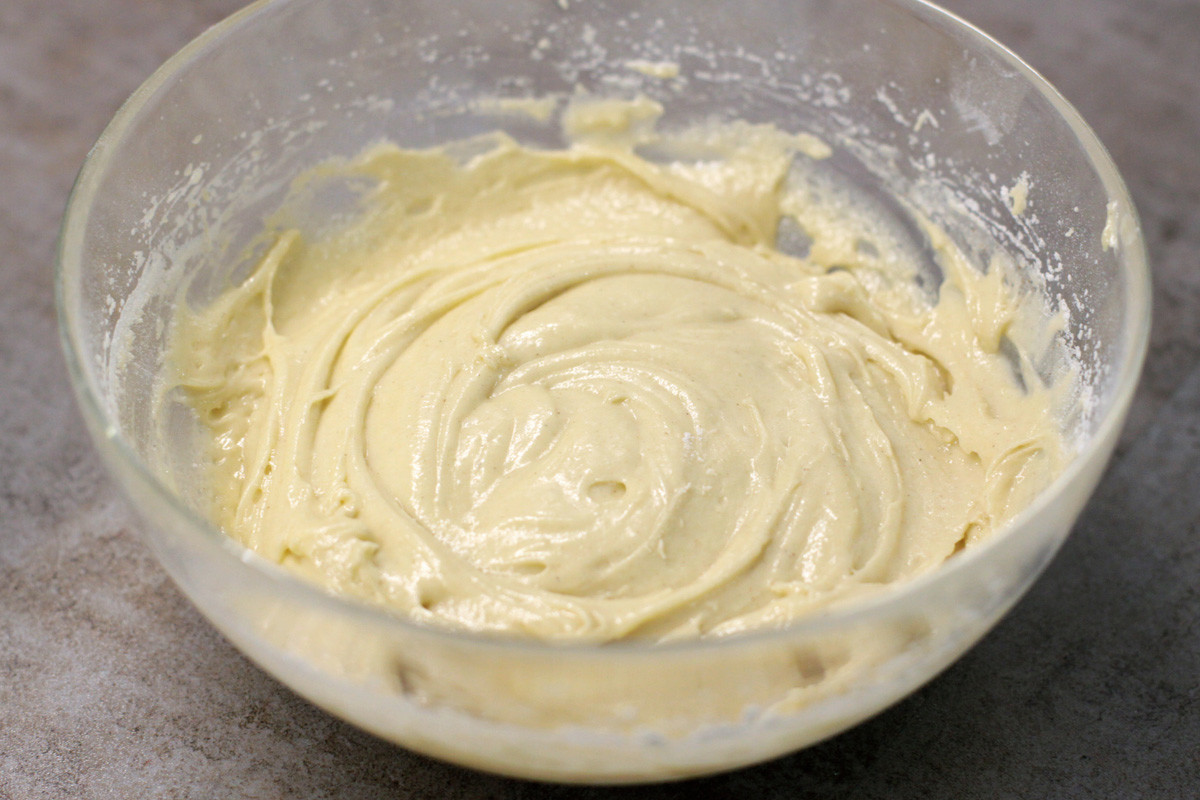 4. Next, you need to combine the sea buckthorn with the batter: carefully fold in half of the berries and mix, leaving the second half for decoration. If you use frozen sea buckthorn, as I do, make sure the berries thaw and drain on a strainer before adding to the batter. Cover your baking pan with baking paper, or generously smear it with butter, dust with semolina or flour, and transfer the batter to the form. 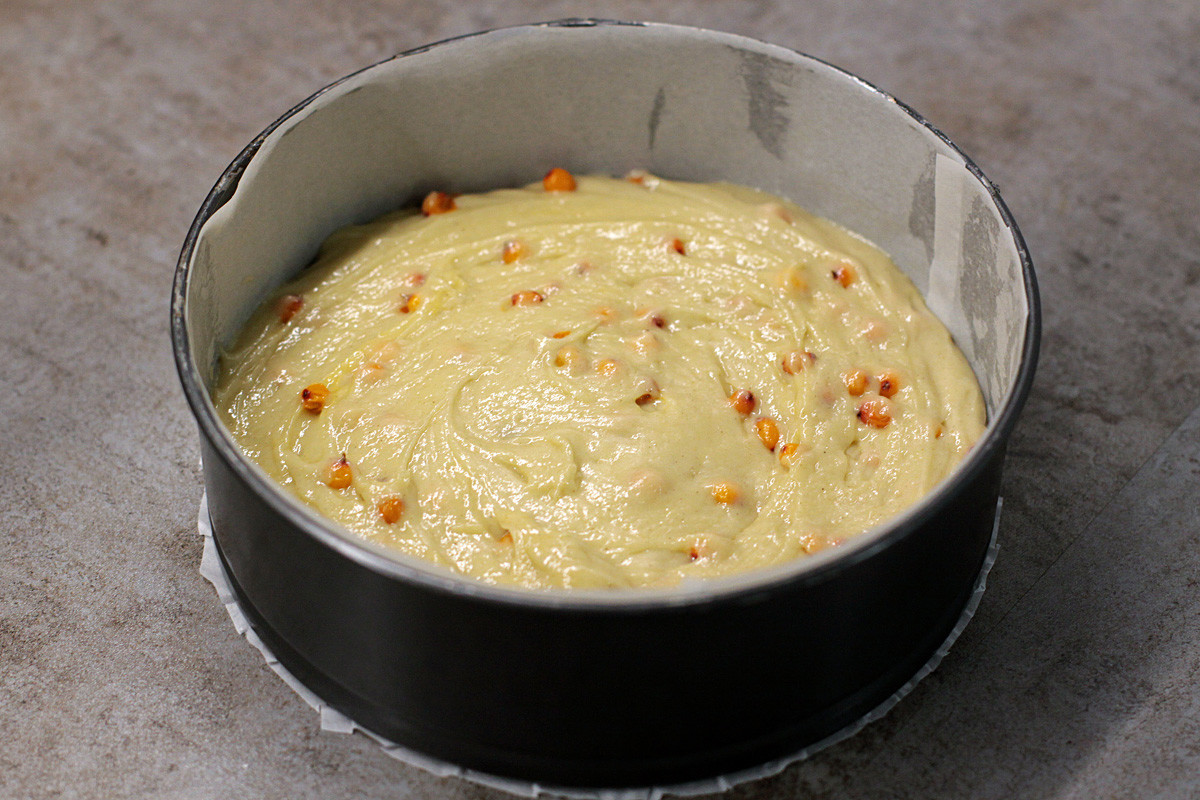 5. Prepare the apples: peel and core them, then cut in thirds or quarters depending on the apples’ size. Make incisions on the top of each piece and spread apples on the batter, slightly pressing them down. I highly suggest using acidic apples because they go perfectly with the sweet batter. 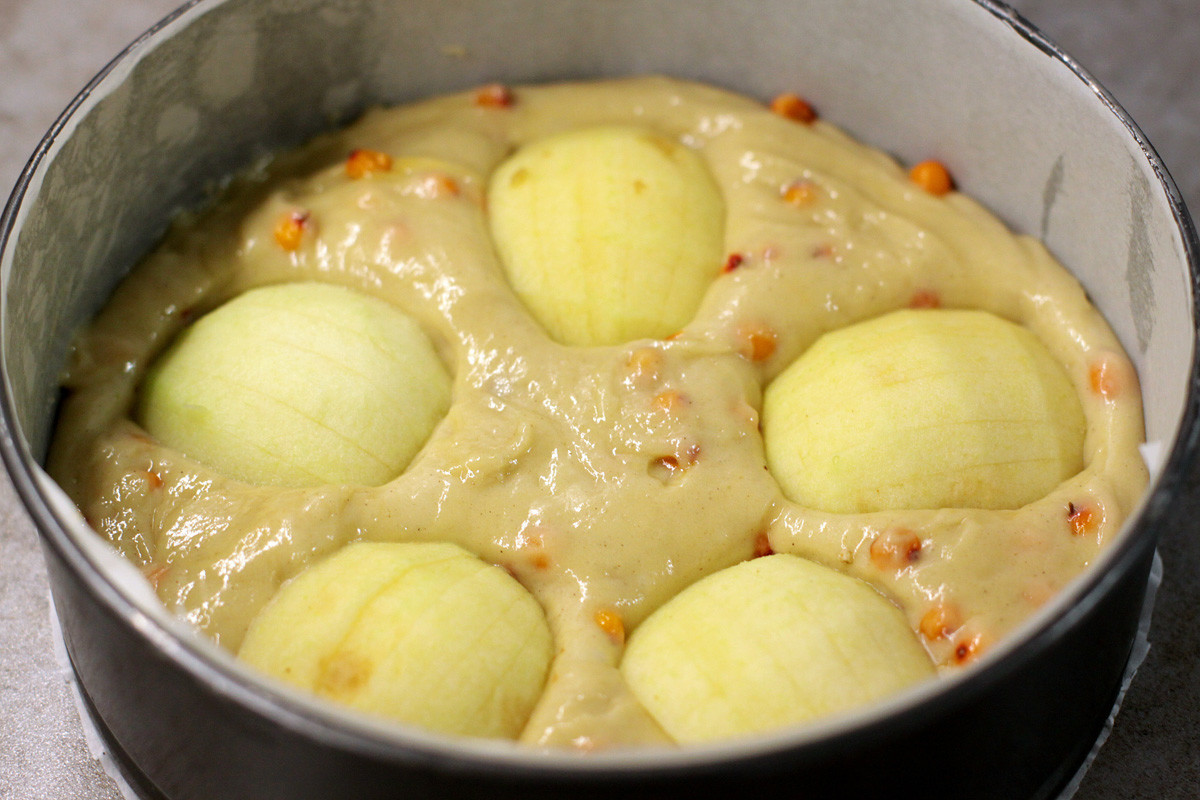 6. Sprinkle the pie with the remaining berries and a handful of sugar, and bake at 180°C for around 40 minutes until there is a nice golden-brown crust on top and it’s well-baked inside. Wait until the pie is near room temperature and loosen it from the pan. 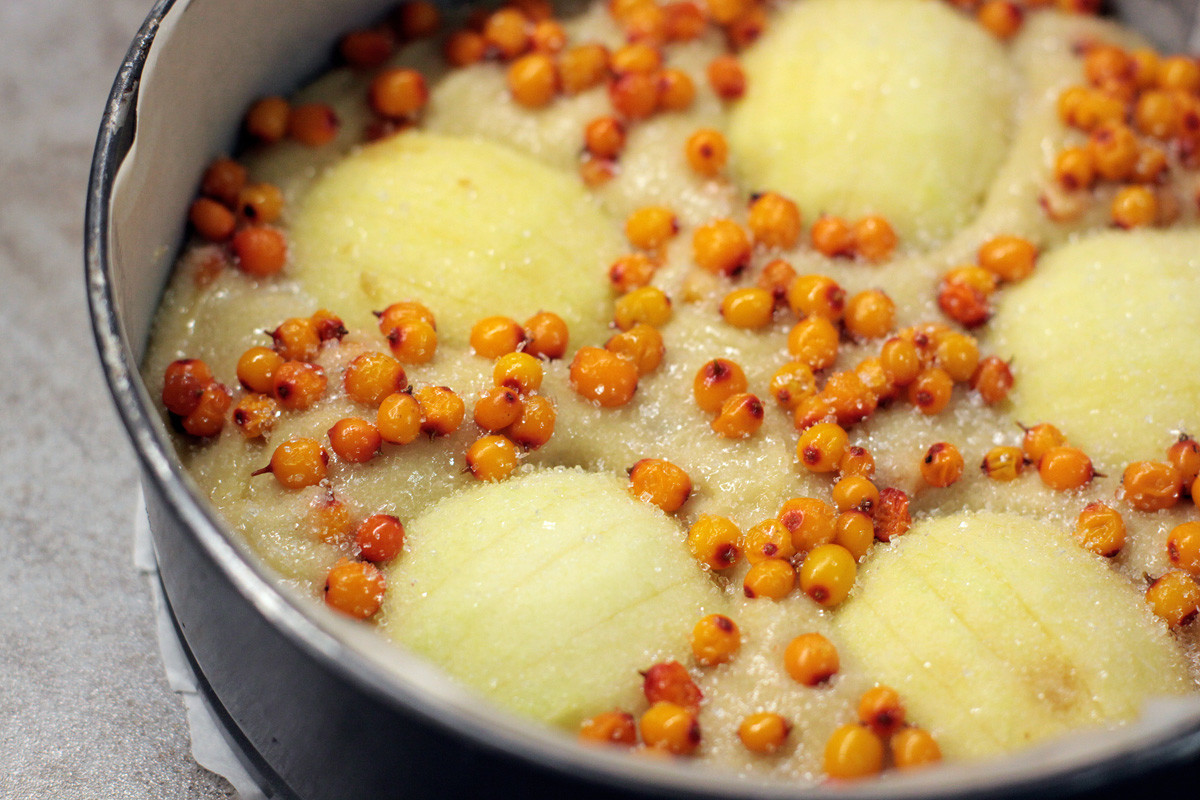 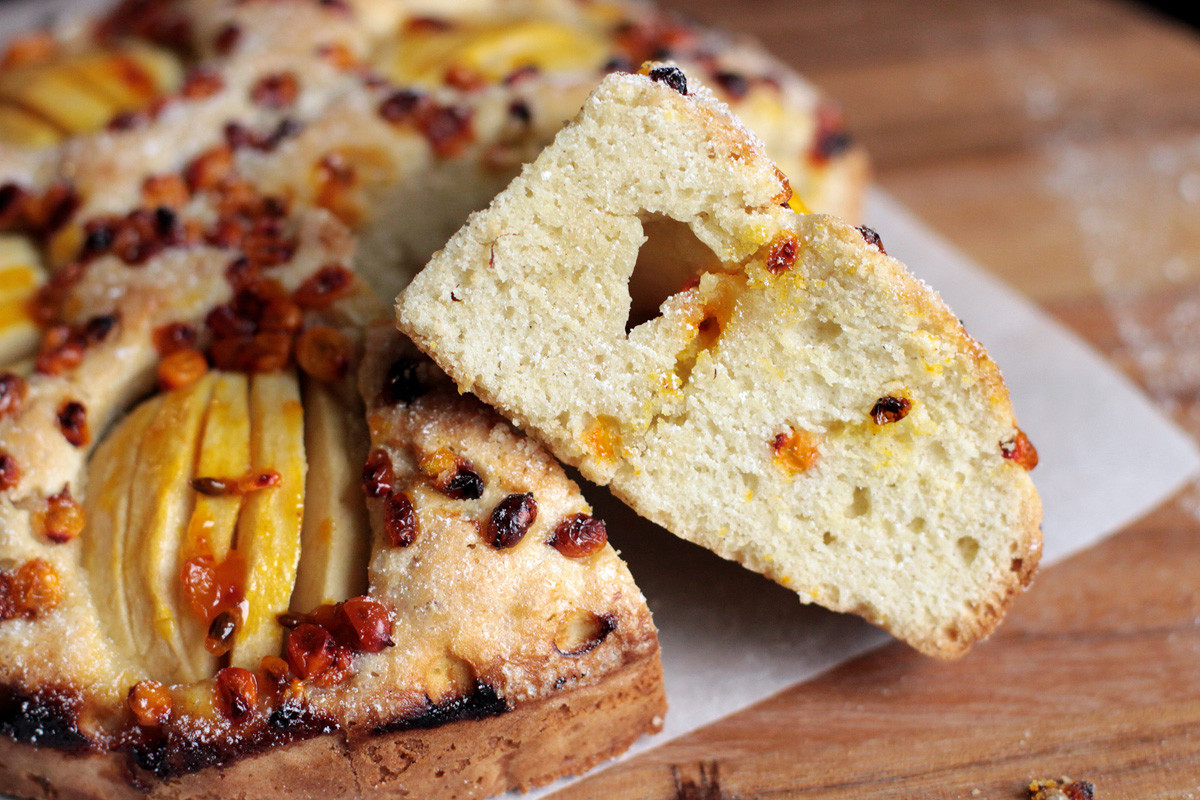