The ultimate guide on how to make Russian salad/ Olivier (RECIPE)

Russian Kitchen
Vasilisa Malinka
Read our tips to help make the ideal holiday salad, the recipe for which has been modified several times in its history and still inspires contemporary chefs.

This salad was invented in the 19th century by French chef Lucien Olivier, who at that time was the head of an upscale restaurant, Hermitage, located right in the center of Moscow. He didn’t create it from scratch, but rather he was inspired and reinvented a popular dish of that time, so-called ‘mayonnaise’. This wasn’t just the condiment as we know it nowadays; rather, it was pieces of fish, chicken or game served with mousse based on oil from the region of Provence. Chef Olivier tried to understand the Russian soul and created something that would feel Russian and that Russians would embrace, whilst adding his French character to it. He succeeded! Even though the modern salad is much different from his original preparation, it will forever be the most iconic Russian salad. Every Russian begins to understand the special status of this salad in early childhood. Even those who dislike Olivier are well aware of its sacred meaning for every New Year’s dinner table. 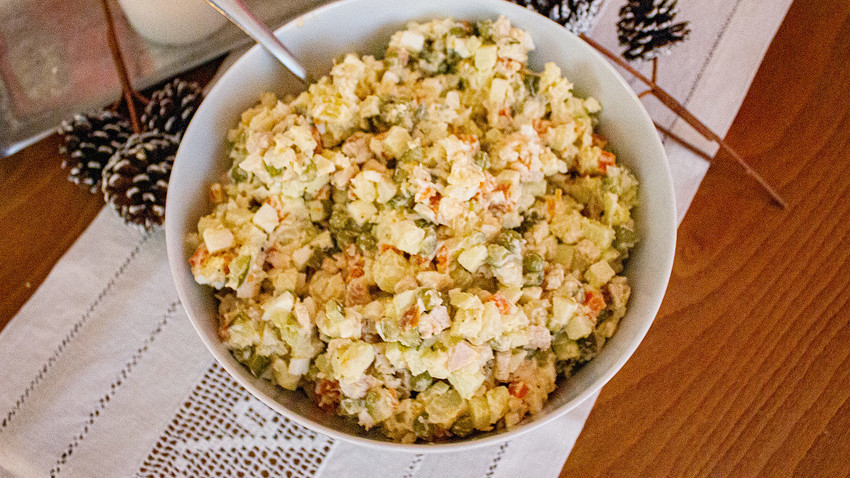 The original recipe by Lucien Olivier used crayfish and grouse as a protein, but that was the 19th century. The recipe was modified after the end of World War II. In those harsh times when people were trying to rebuild the country, grouse and crayfish were simply not available. So, they were replaced by something more affordable such as ‘doctor sausage’. In addition, this sausage was recommended as a vital part of the diet for those whose health had been weakened as a result of the war. Later, when chicken or beef were no longer in shortage, people started using them as the main protein. There are also variations with shrimp, crab meat and quail, but nothing beats the classic crayfish and grouse. Although we do not urge you to spend your entire budget on those, all of the above make a tasty Olivier as well.

Cutting the ingredients in different sizes is a terrible error! It is important for all components of Olivier to be cut the same size and shape. Cubes, to be precise. Take the size of your peas as a reference and remember to use a sharp knife.

Don’t be afraid of mayo! Some recipes use sour cream or even yogurt, but that’s mostly for a low-calorie salad. However, let’s be honest, there’s nothing like good old mayo. It was just meant to be there from the beginning (by Lucien himself) and we shouldn’t be the ones to alter it. Remember, everything in moderation. Don’t go too crazy on it though; mayo is just another ingredient and it shouldn’t overpower all of the others.

Overcooked potatoes lose their structural integrity and will ruin your salad by becoming a non-ingredient mashed potato dish. Therefore, it is extremely important to cook potatoes to the right consistency. You can achieve that by starting with whole, skin-on potatoes in cold water. Slowly bring them to a simmer and cook until you can poke them with a knife and it goes in easily. Once your potatoes are cooked, immediately drain the water and let them cool to room temp before peeling.

In the original recipe, Lucien Olivier used olives and capers. In Soviet times those were replaced with pickles, which is a staple in the Russian pantry. Some inventive people put other crunchy pickled vegetables, legumes or even fruits, such as apples. You can stick with the pickles of your choice, but definitely make sure not to skip them, because they add this special pop of salt and acidity that is so essential for Olivier.

Olivier is not exactly the lightest salad out there. So, brighten it up by using some fresh ingredients such as onions, celery or even apples. They add this amazing crunch and juiciness to your salad that everybody loves so much.

It is a common fact that Olivier tastes better the next day. We are not suggesting you make buckets of it, but make sure you prepare enough so as not to regret the next day that you didn’t make enough!

When it’s almost ready, taste your Olivier and make sure it’s balanced. Sometimes the potatoes might be overpowering, or you might be lacking acidity or salt or some crunch. If your flavors are muted, add salt. For more acidity, add more pickles. For the extra crunch, go for more veggies. Trust your gut, add a little more of what you think will make it better and go for it. 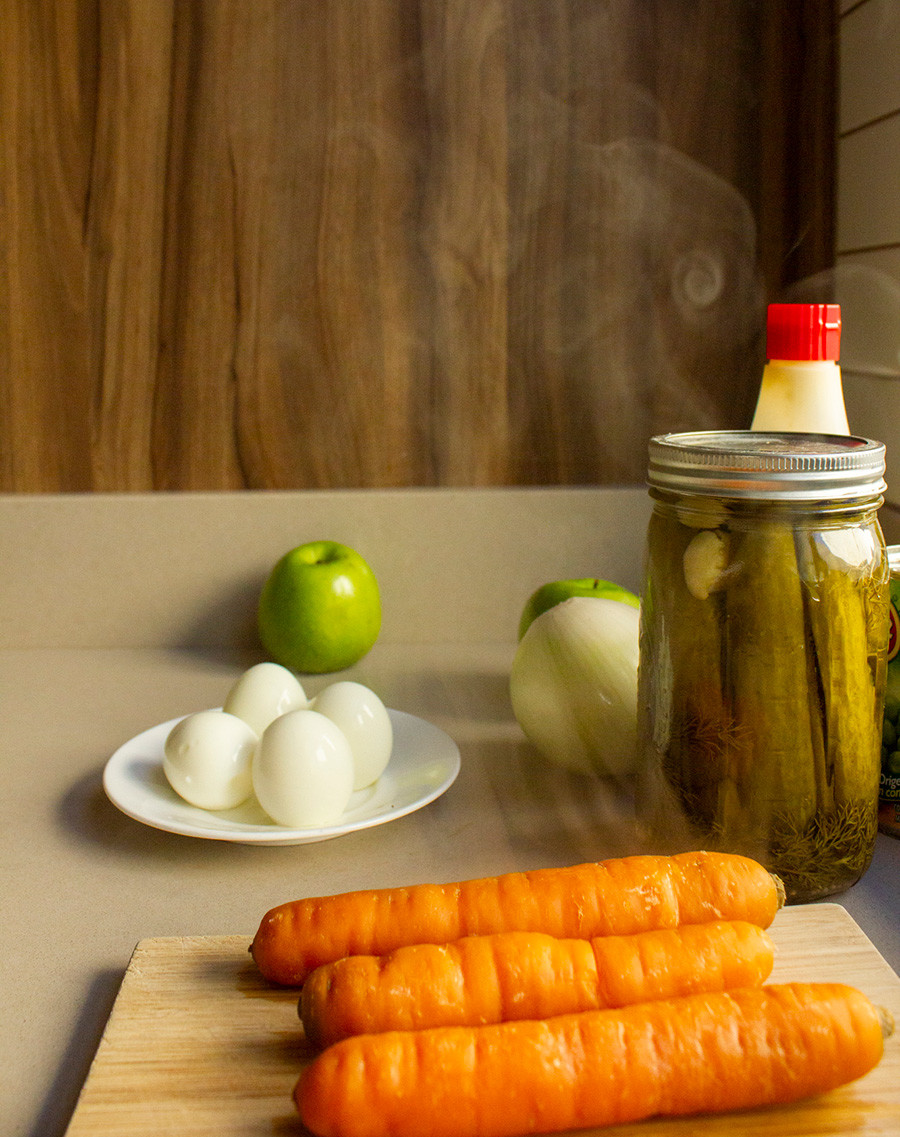 1. Start by cooking your potatoes and carrots. I recommend to cook them with the skin in the same pot of water. 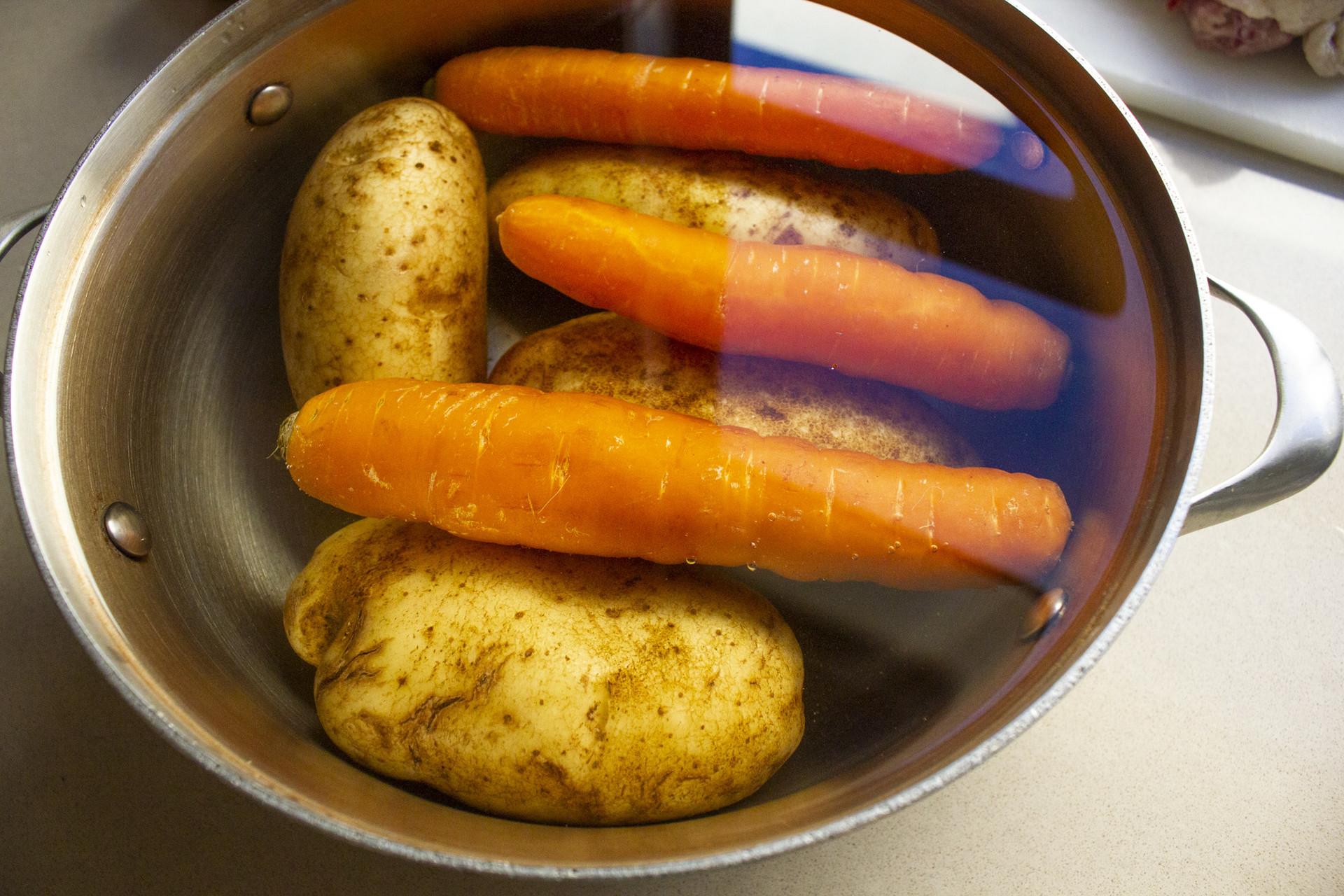 Slowly bring the pot to a simmer and cook the vegetables until the knife goes through easily. Don’t overcook them! Once your vegetables are ready, drain the water immediately and let cool to room temp. Peel and cut them into more or less equal sized cubes. 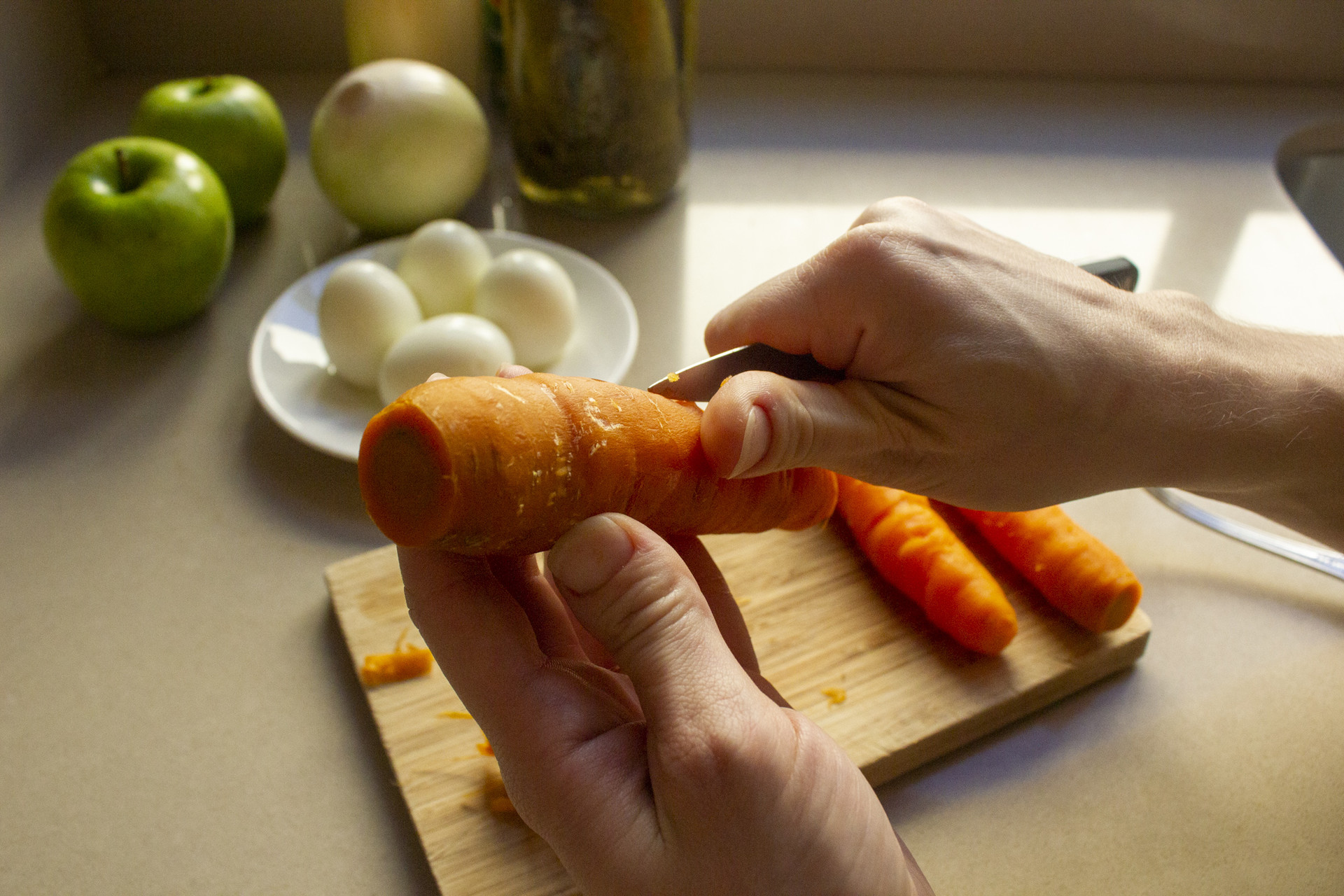 2. Meanwhile, cook your eggs. In a pot with boiling water, carefully place your eggs one by one and cook for exactly 10 minutes. 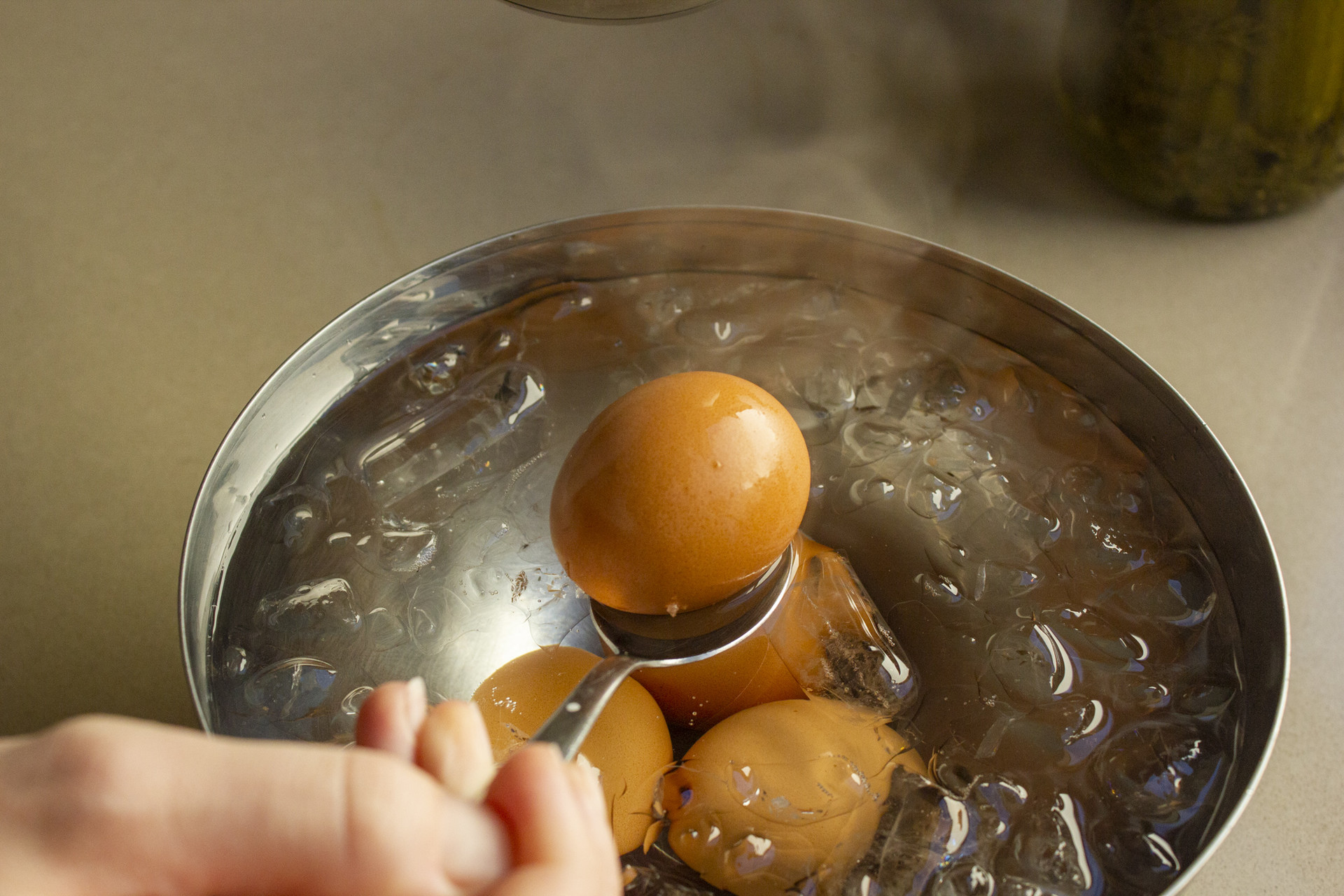 Prepare a bowl with ice and transfer the eggs straight from the boiling water to the cold water. Let them sit there for at least 2-3 minutes. Peel and cut into cubes. 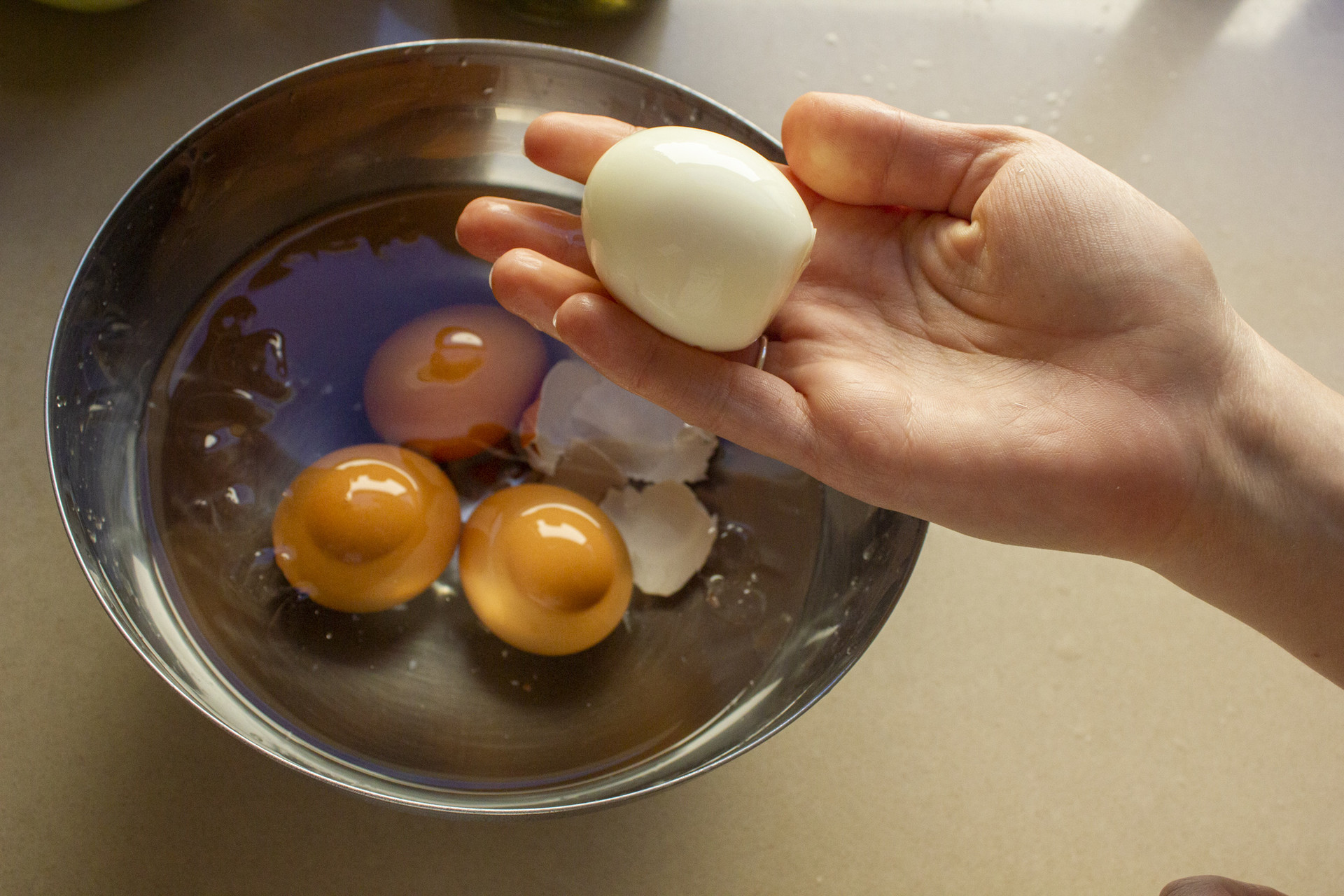 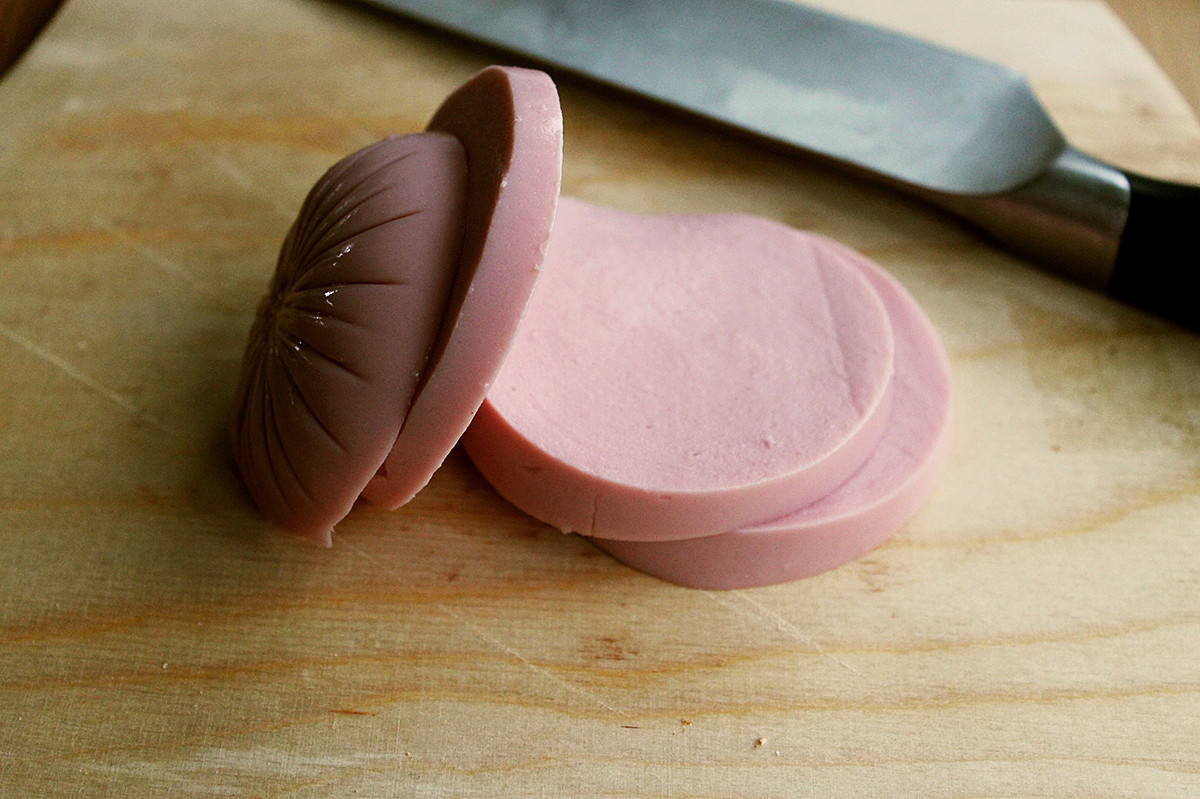 4. Dice your onion and cut the pickles. 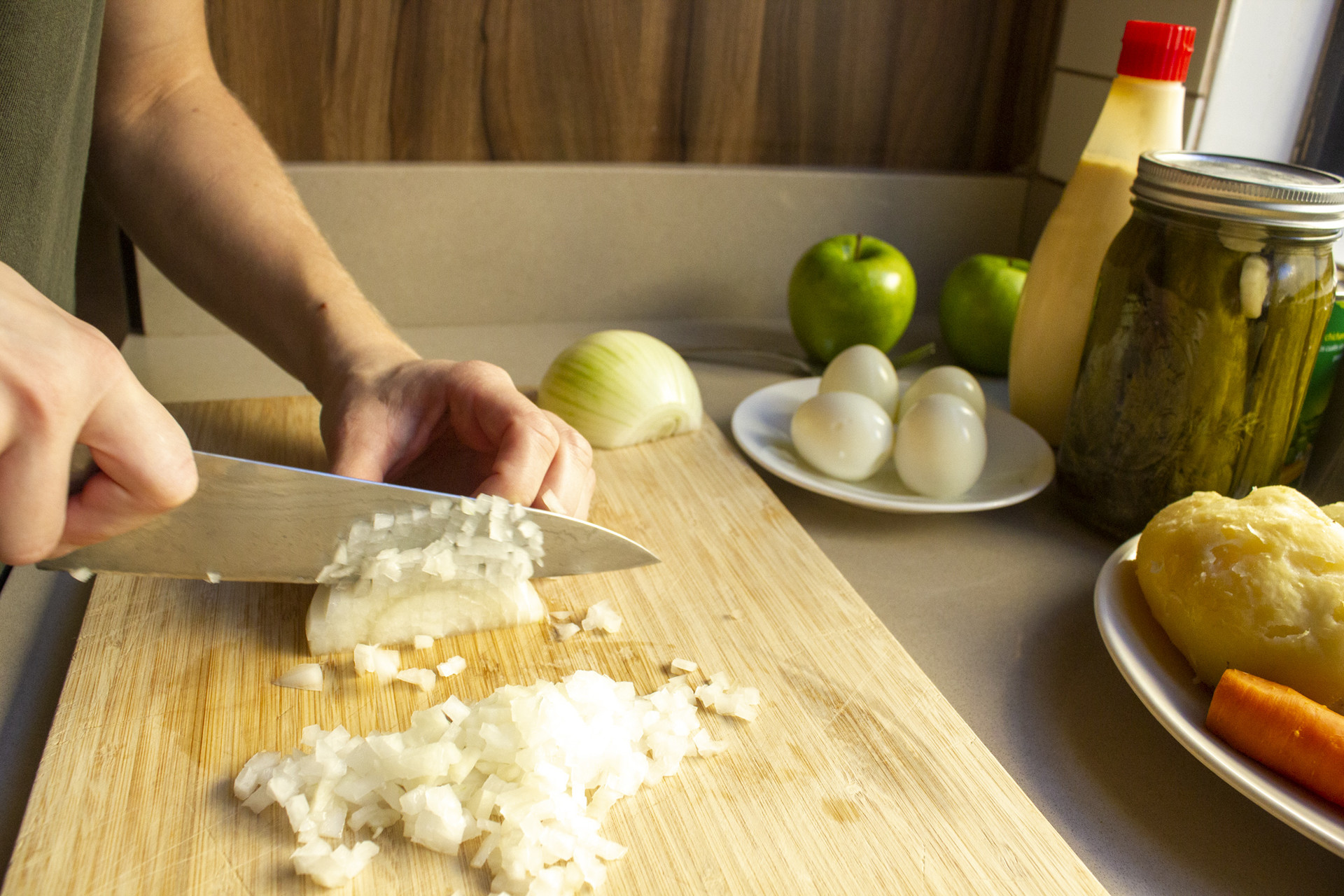 5. Drain the water from the peas.

6. Mix all the ingredients in a bowl, add salt, pepper and mix together. 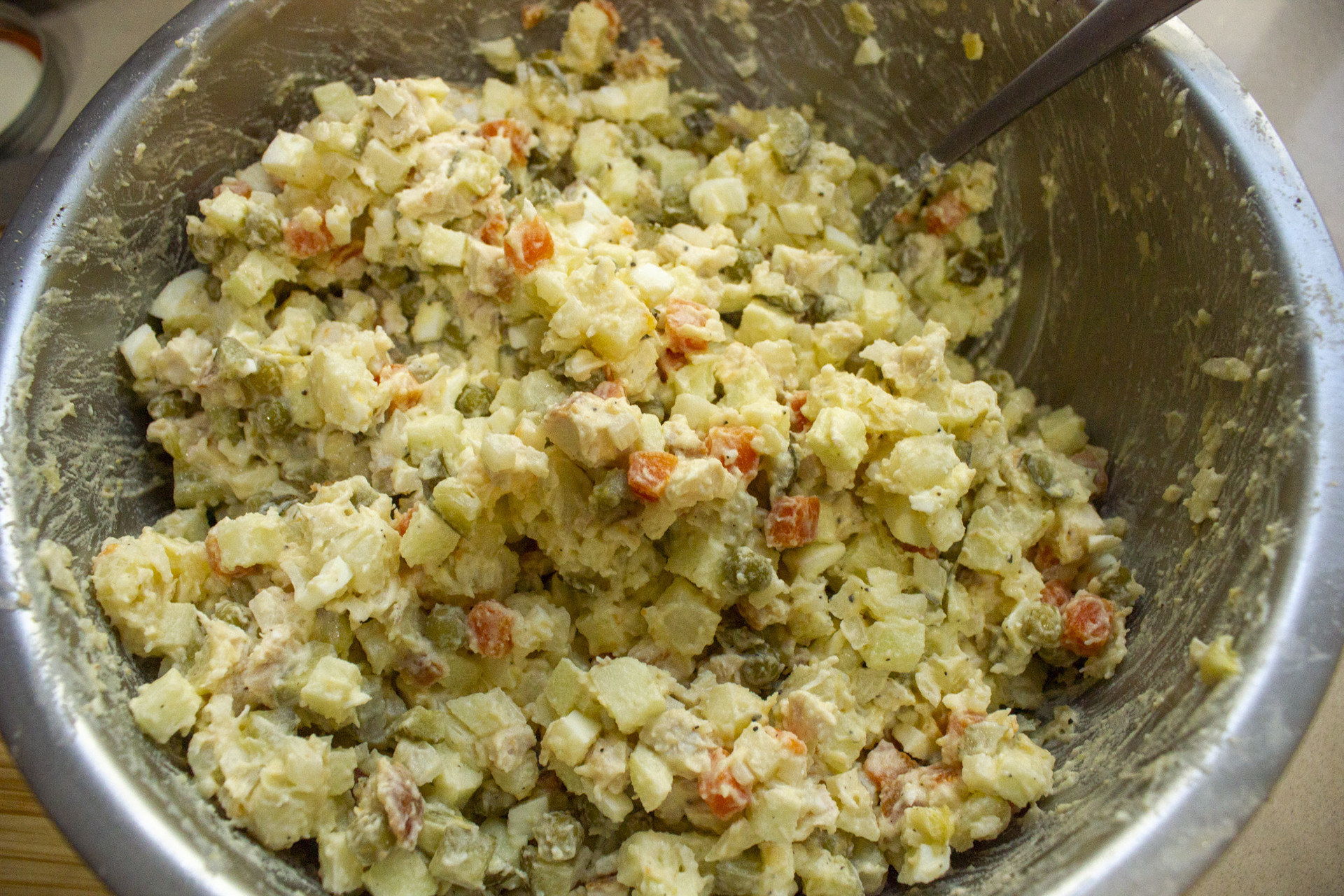 7. Now add about 3 tablespoons of your mayo and mix the salad again. Taste it and see if you need more mayo, salt or anything else. Make sure your salad is not lacking anything. Enjoy! 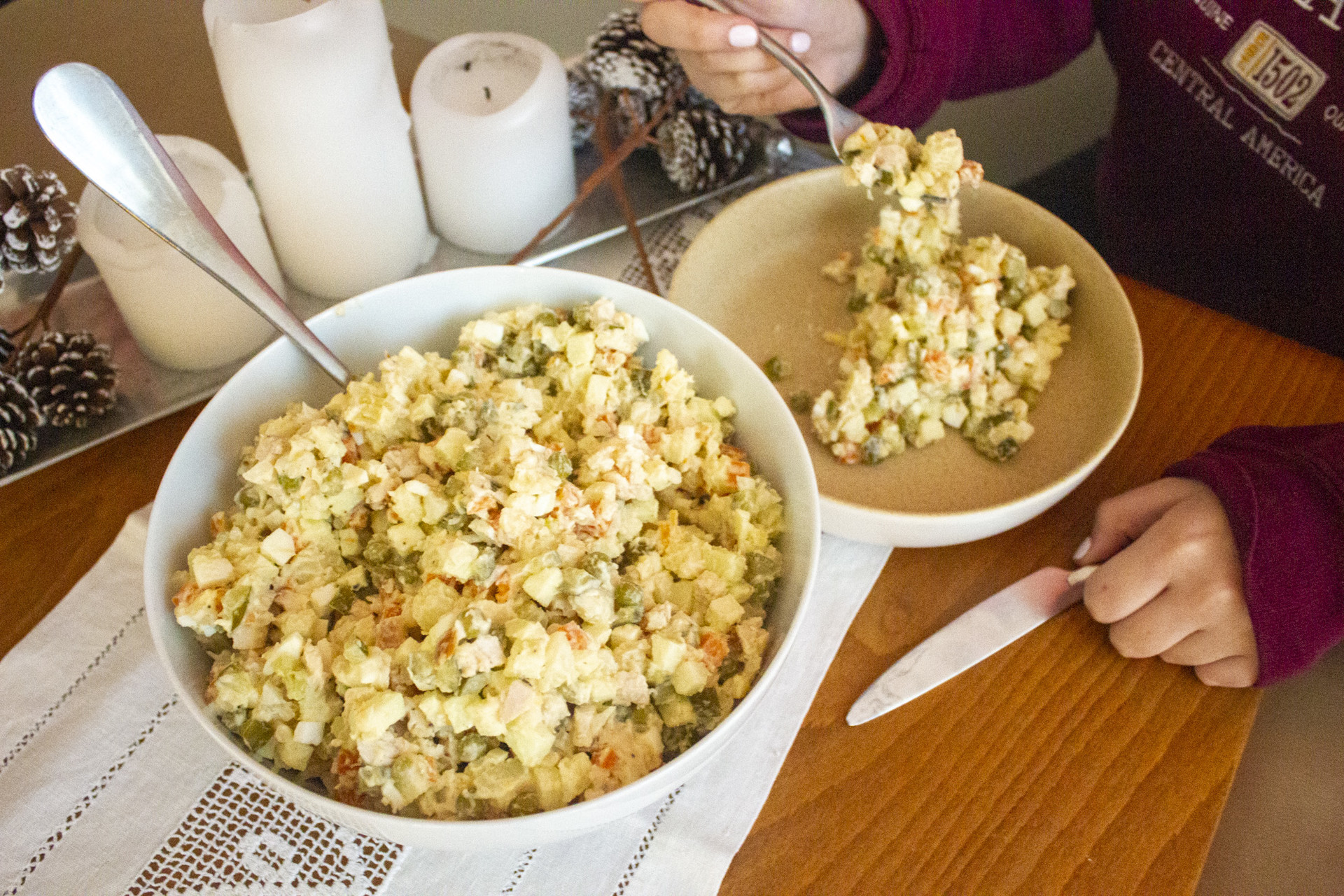