7 Russian dishes that take the longest to cook 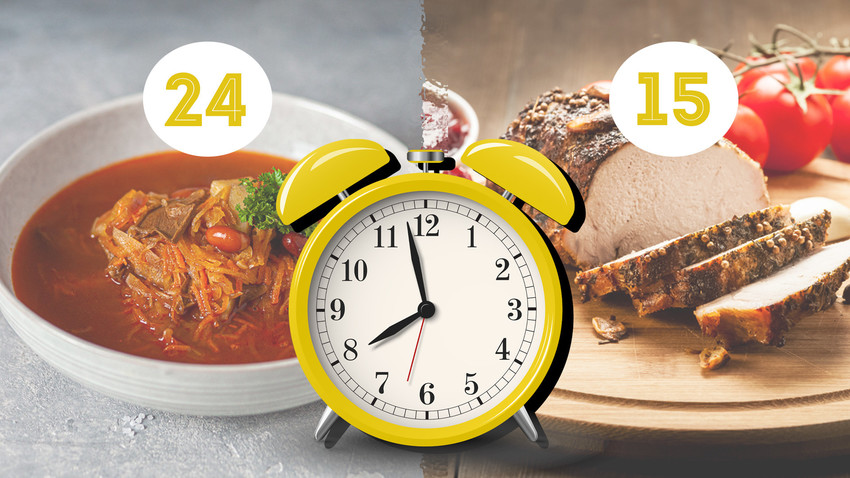 Yulia Mulino, Legion Media
Russian cuisine is by nature quite leisurely. Many dishes must simmer in the oven at low temperatures or ferment in a cool place for a long time. But the ingredients for them are very simple. 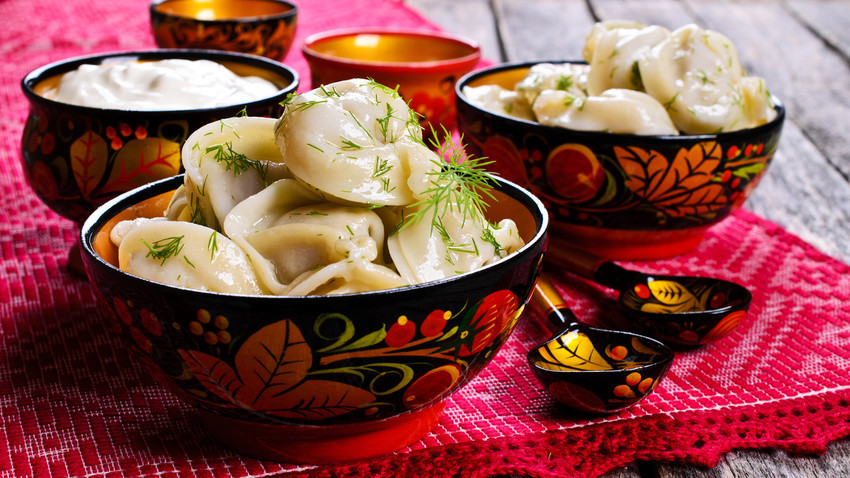 Many Russian families still keep up the tradition of making pelmeni (dumplings) all together. The best time for it is on a cold winter evening, when a snowstorm is raging outside and no-one feels like leaving the house. The thing is that making pelmeni takes a lot of time and people usually make 100-200 of them at once and put them in the freezer. In Soviet times, even a special gadget for making pelmeni was invented, however pelmeni made with it did not have the “authentic” shape, and anyway, it is much more fun to make pelmeni with one’s family instead! The dough consists of flour, eggs and water, and the filling can be of your choosing (minced beef, pork, lamb, poultry or fish; you can also add cheese, spices, vegetables, etc.). Cut out circles from the dough with a glass, put a ball of stuffing in the center, then fold it and do it a hundred times. An excellent way to spend an evening! 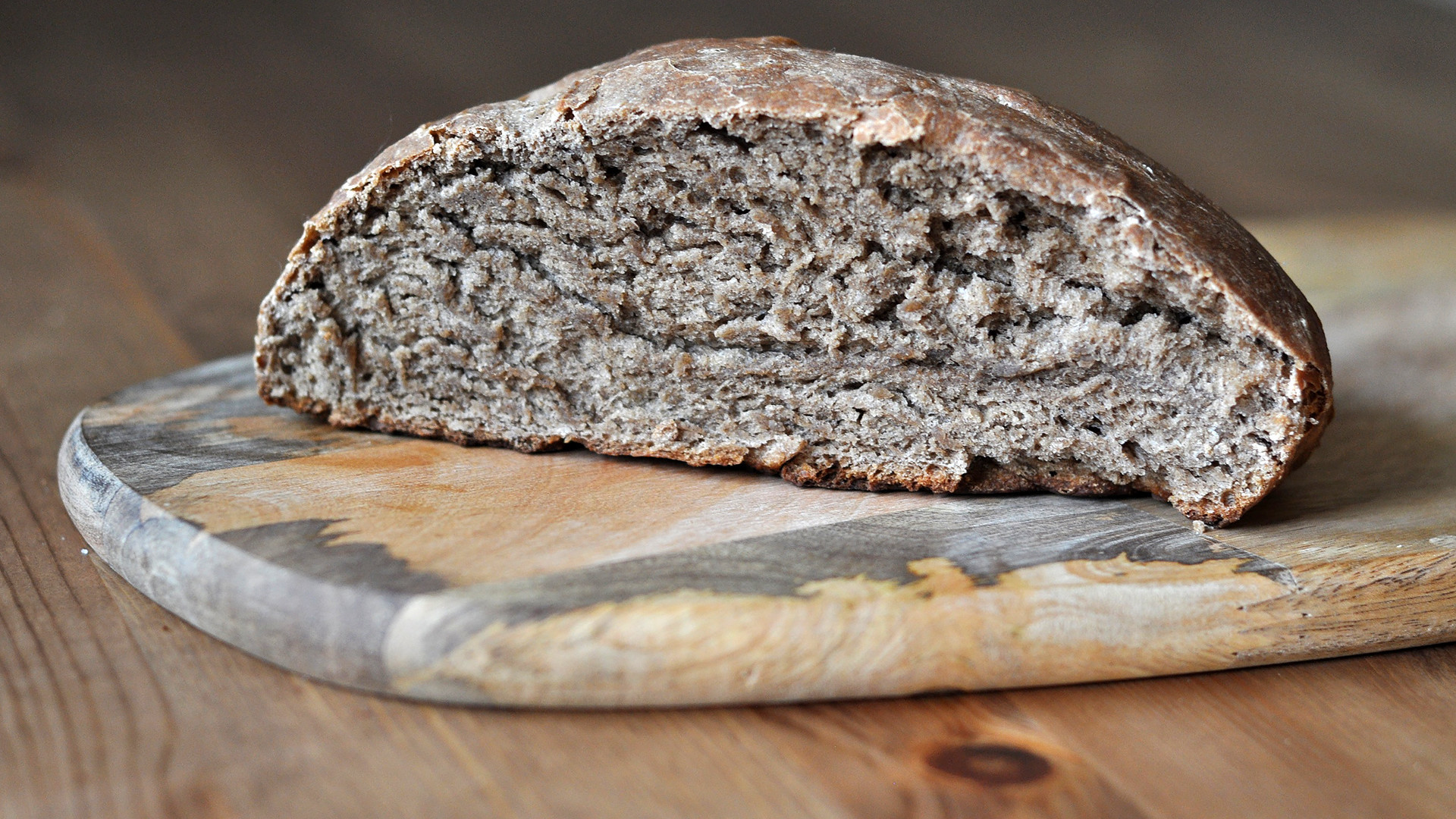 The recipe for traditional Russian bread looks quite simple: flour, water and yeast. So why do so few people make it at home? The thing is, bread cannot be left unattended for a long time. After kneading, the dough should be allowed to rise for a couple of hours, then you need to knead it a bit more and let it rest for an hour, then knead it again and let it rest, but already on a baking sheet, then put it into the oven and then let it cool in the oven. Got all that? On average, making bread takes about five hours. Modern bread makers can make bread overnight, but what could be tastier than bread made with one’s own hands? 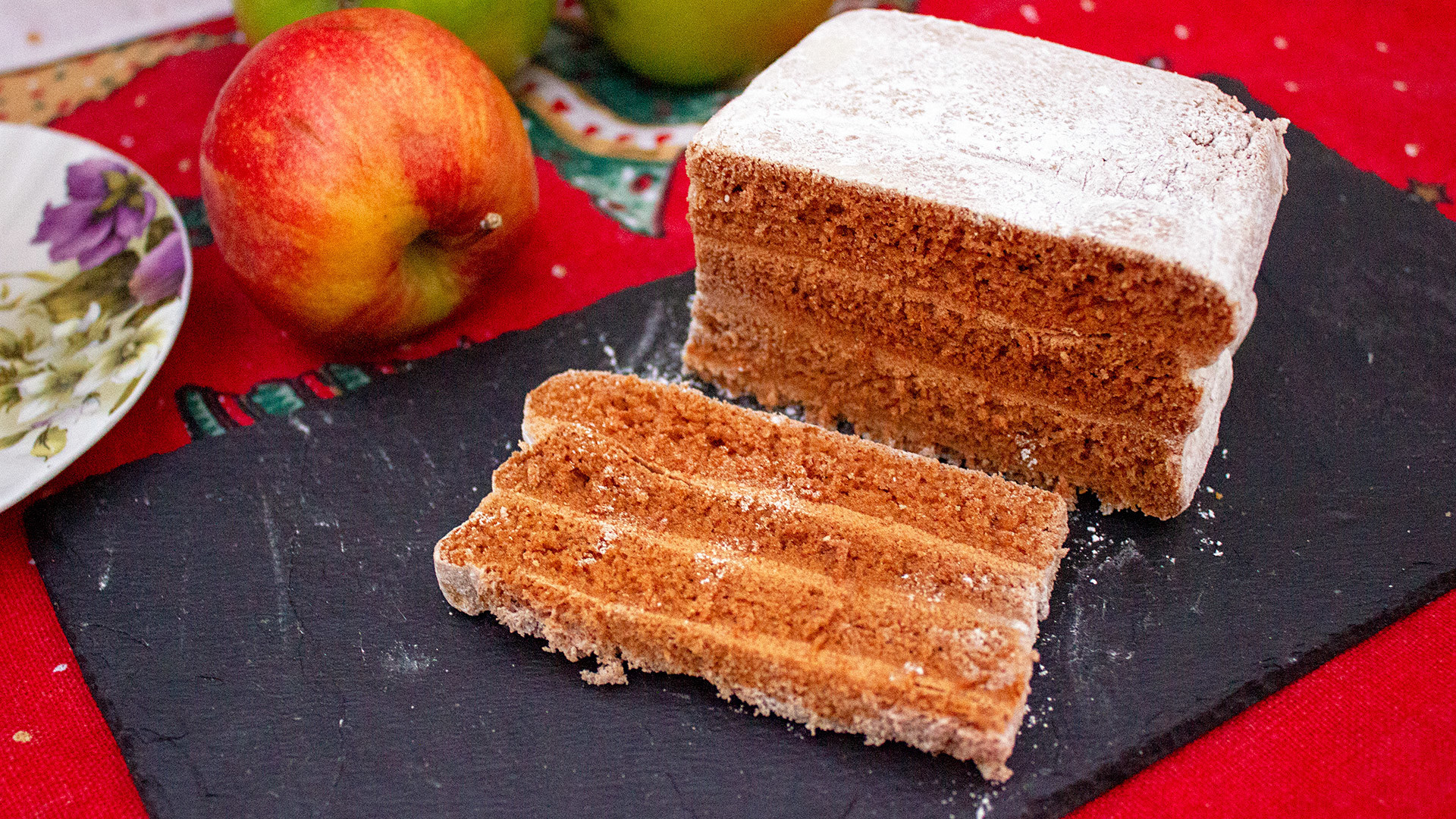 If you have never tried pastila, now is the time to do it, because it is the healthiest dessert imaginable! Its sole ingredients are apple puree and whipped egg white. Sounds easy, right? This is when the fun begins: first, the apple mixture must be dried in an oven at a temperature of 80-100 degrees, not higher. So, you put it in the oven for 4-5 hours first, opening the oven door every 30 minutes. Then you put the whipped egg white on top and dry it for another 3-4 hours. The result is simply magical! 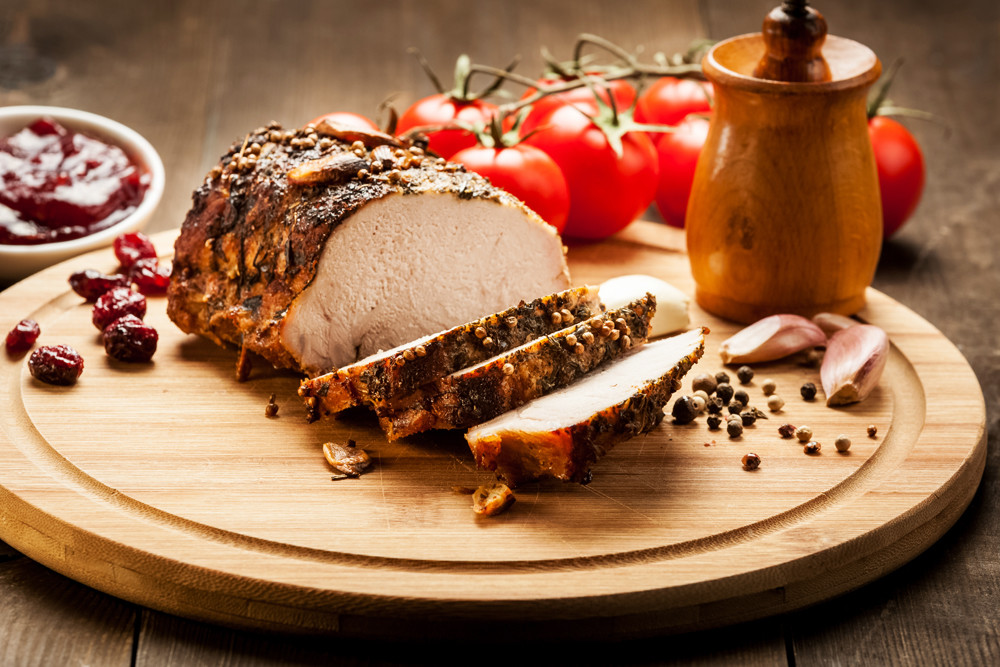 Russian ‘buzhenina’ is a large piece of meat cooked in spices, which is served as a cold appetizer. Usually, buzhenina is made out of pork tenderloin or joint, but you can also use fatty beef, lamb, and even game. Buzhenina can be baked or boiled, but the result will be equally tasty. For baking, mix pepper, salt, garlic and olive oil (optional), spread the mix evenly over the piece of meat, then wrap it in foil and put it in the fridge overnight. Take it out in the morning and, without unwrapping the foil, put it in the oven for a couple of hours, depending on how thick the meat is. Then, cool it for an hour and serve. If you choose the boiling option, first you need to marinate the meat in a brine with spices (see ingredients above) for a night, wrap a string around it (so it doesn’t fall apart later), boil the meat for one or two hours, and then put it in the fridge for 10 more hours (!) to “ripen”. 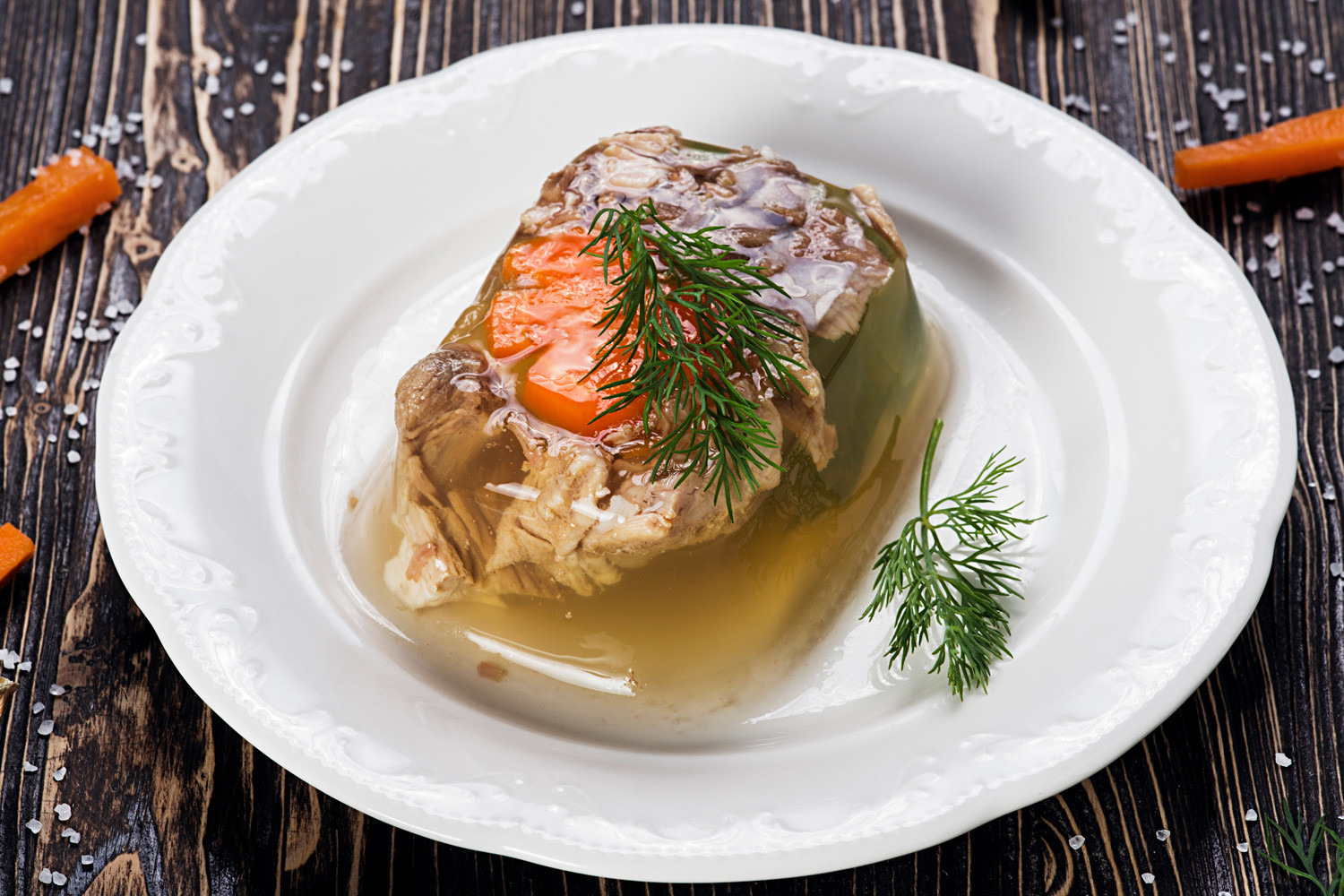 This meat jelly, which so many foreigners find off-putting, is in fact very good for you: it strengthens bones and improves skin elasticity. The dish is called ‘kholodets’ (from the Russian word for cold, kholod), because it needs to be kept in the cold for a while to settle. A proper kholodets is made from bone broth, without adding any gelatine. The broth is usually made from pork, but other types of meat or fish are also used. Kholodets is typically prepared for special, festive meals, because it takes a lot of time to cook. First, boil pig knuckle and trotters in a slow cooker for about five hours, skimming the foam off. An hour before the end of cooking time, add bay leaf, pepper and garlic. Then, the broth needs to cool for an hour, with the lid off. Next, shred the meat, take out molds and half-fill them with the meat, pour strained broth on top and leave the molds in the cold for at least 12 hours. Kholodets cooked this way will never melt on a plate! 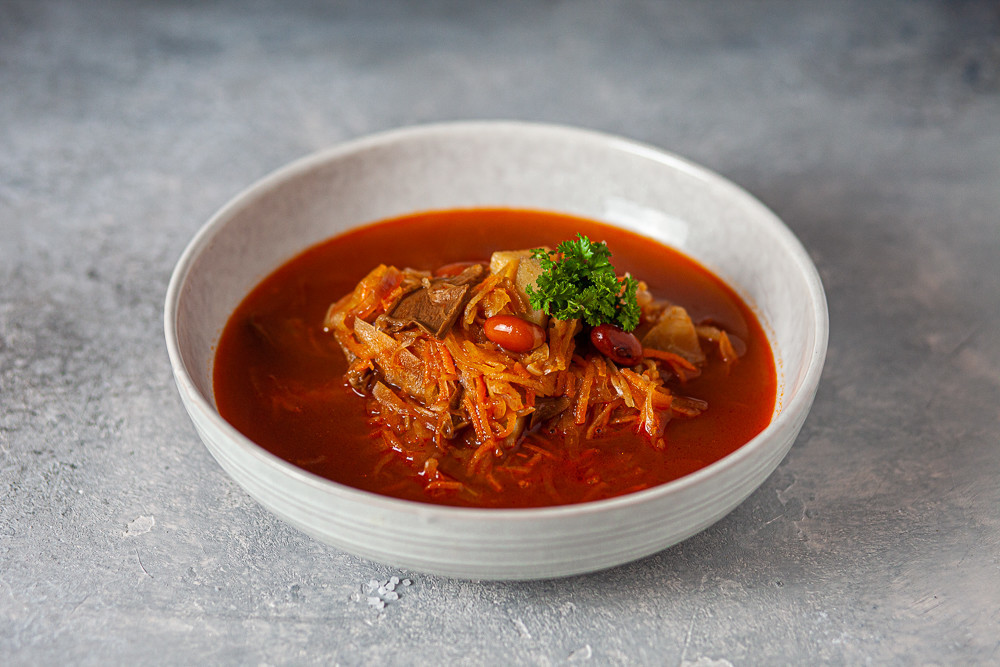 In the old days, this traditional Russian cabbage soup was cooked in a cooling stove. This method is called simmering, whereby food is cooked just below the boiling point for a long time. Modern ovens often have a simmering mode. You can choose ingredients for your soup to your liking: some like vegetarian cabbage soup, while others prefer their shchi to have meat in it; some choose sauerkraut, while others opt for fresh cabbage. First, prepare the broth, either meat- or vegetable-based, add the other ingredients, then pour the cabbage soup into pots and put them in the oven, heated to 220 degrees, until boiling. Then reduce the temperature to 160 degrees and leave for two hours, then reduce temperature by 15 degrees every hour, until it reaches 70, as in a stove. There is an easier option: cook cabbage soup in the oven in the evening and leave it till morning. 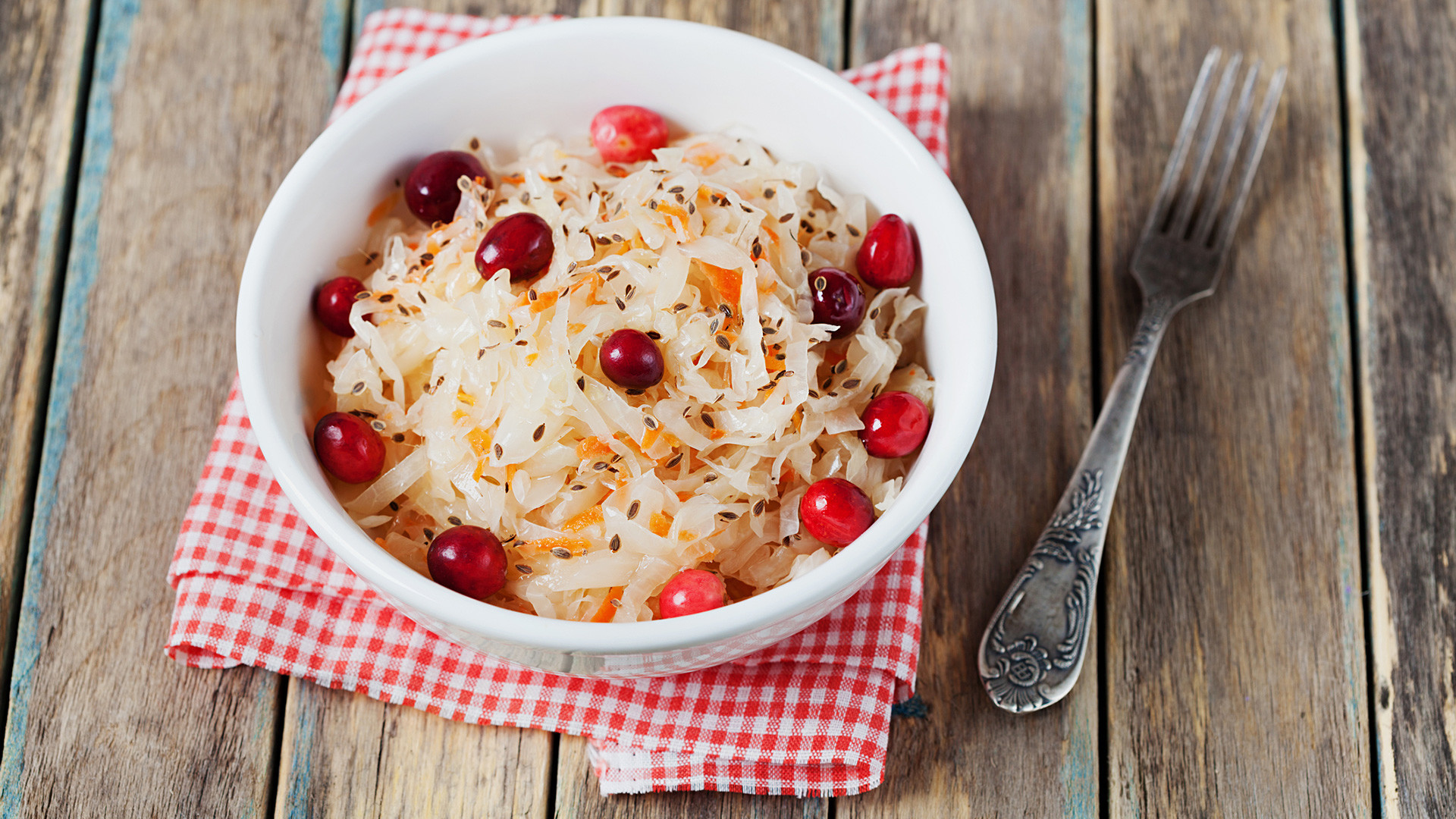 Generally speaking, fermented foods are very good for you. Fermented cabbage (known elsewhere in the world as sauerkraut) is a favorite dish for many Russians. In the classical recipe, all you need is shredded cabbage and salt, but many people also add sugar to speed up the fermentation process. But we are not in any hurry here. Salt the cabbage, put something heavy on top of it and leave it at room temperature for a couple of days, checking it from time to time and releasing excess air. When it is ready, store it in the fridge.