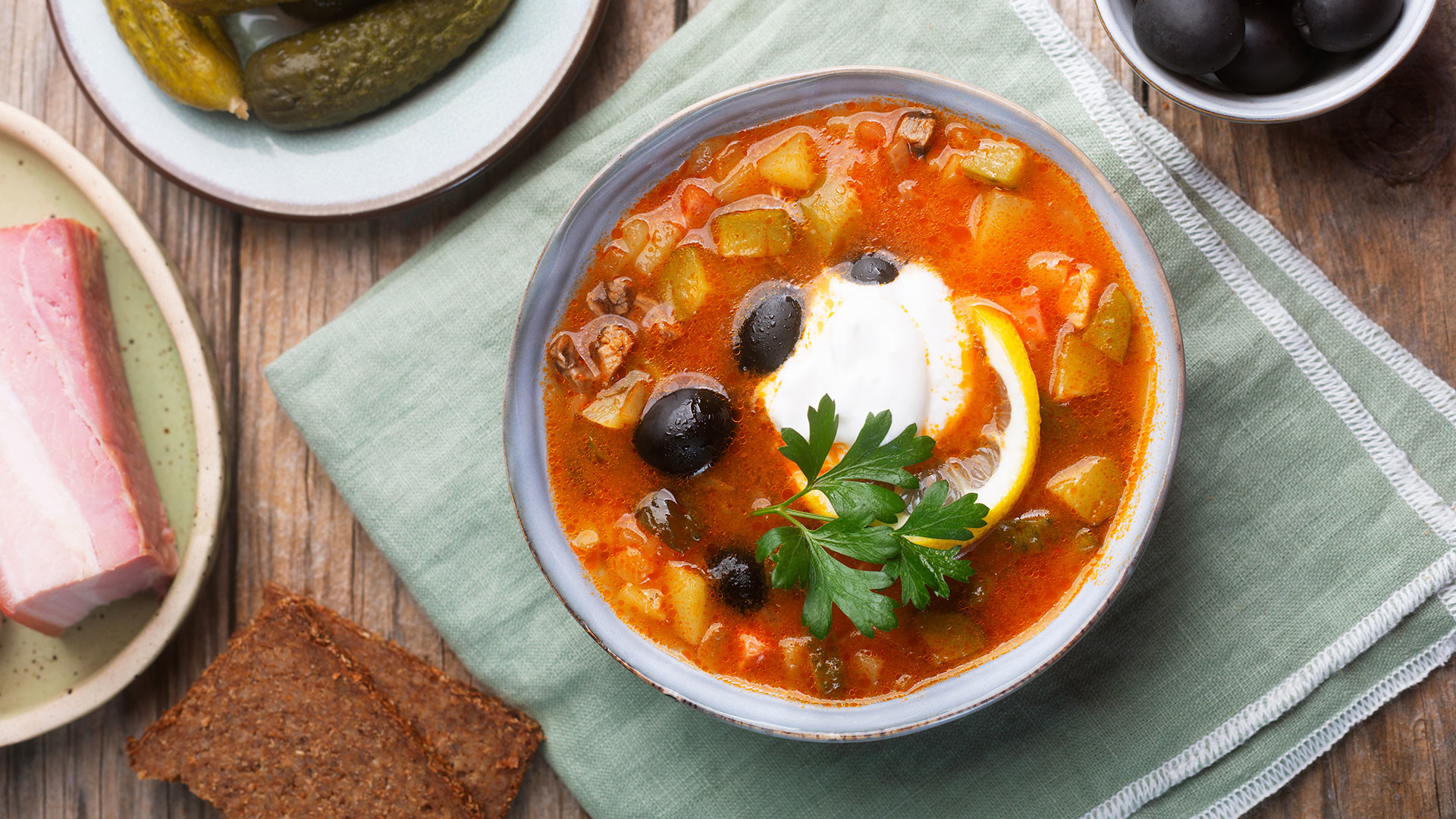 Getty Images
All cuisines around the world surprise people with weird dishes, and Russia is no exception, with its herring and mayo salads. However, some breakfast dishes from the Soviet era are too much for even modern-day urban Russians. But if you find yourself in the countryside then don’t be surprised if this is what they serve you. 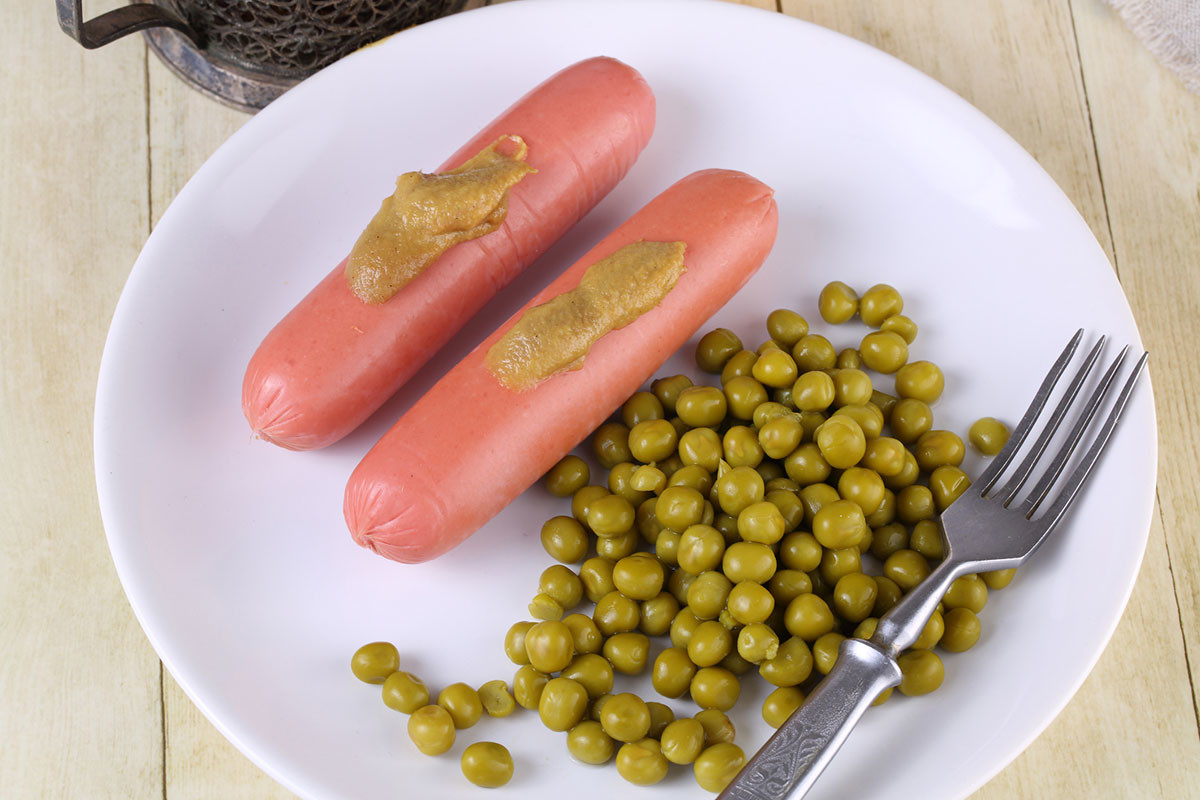 The Soviet cooking bible, “The Book of Healthy and Tasty Food”, calls this ‘breakfast of a Soviet engineer’. It’s incredibly easy and quick to cook (so that a Soviet man could handle it). Just boil sausages, add canned peas that are healthy and delicious - and spice with mustard. Perfect, isn’t it...? But would you eat such a breakfast? Looks like a mix of traditional English breakfast and German dinner - and with few ingredients. But Soviet people DID really have such a breakfast- and still many Russians are keen on it. 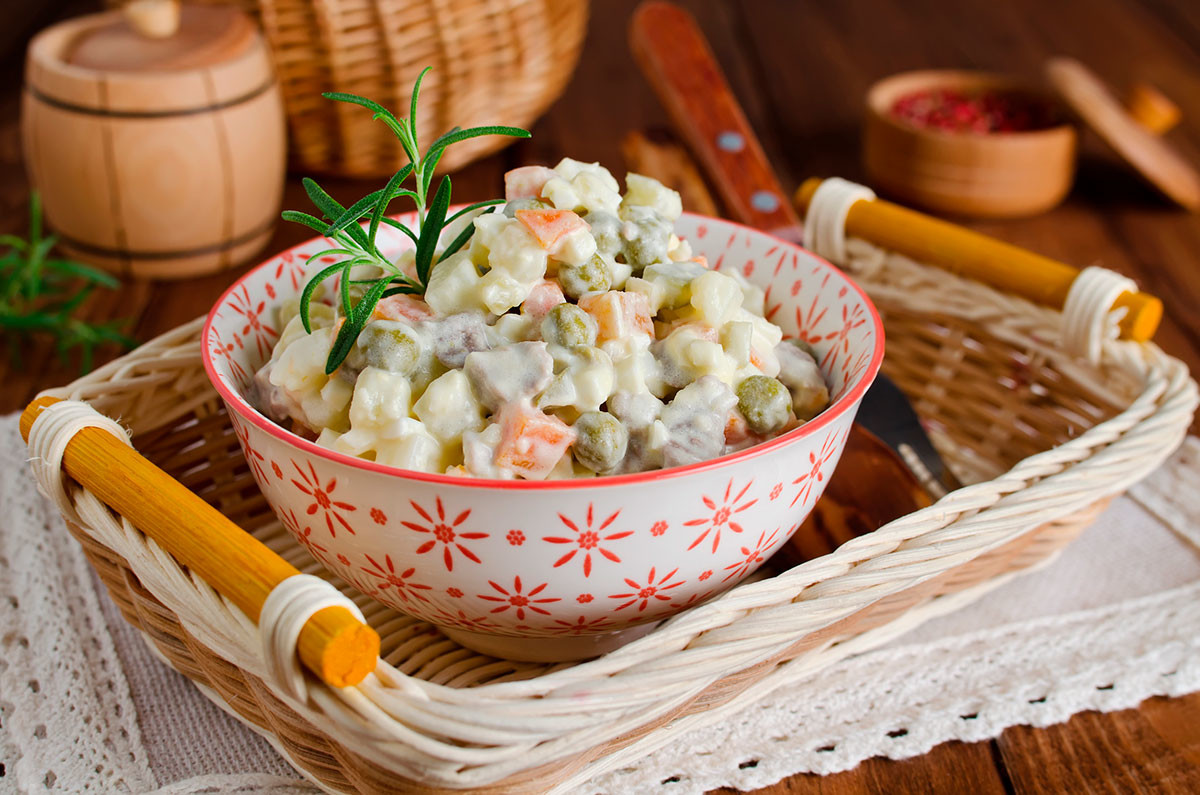 We cook a lot for feasts, especially New Year’s and birthdays. So the full table of dishes isn’t ever eaten completely. A dozen lunch boxes with leftovers go to the fridge. But they won’t get covered with mold! Instead, chances are they’ll be eaten the next day - for breakfast!

The typical first meal on January 1 is always Russian salad (Olivier), a little ‘herring under the fur’ that consists of grinded beets, potatoes and carrots laid over with mayo. And you know what? Russians believe that the next day they taste even better because overnight the mayo manages to soak all the layers thoroughly. 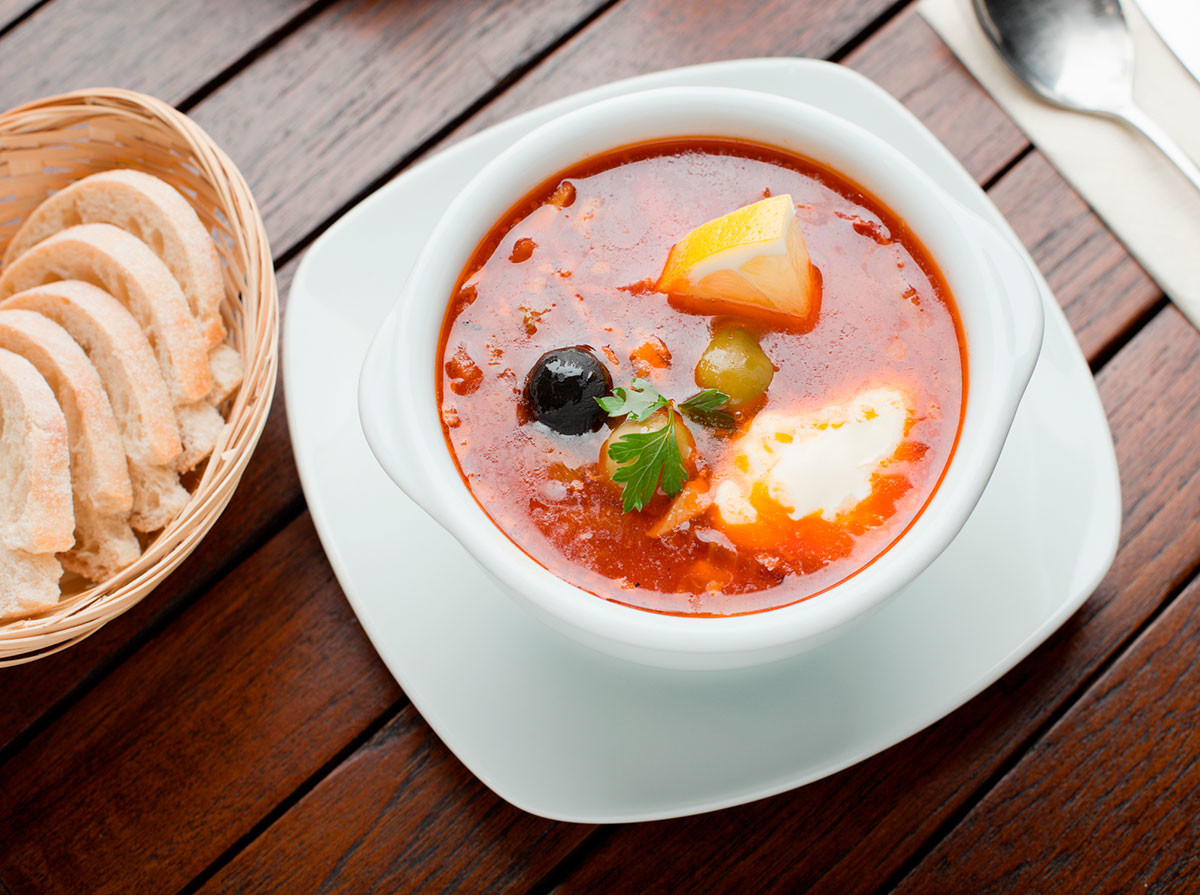 You’ve probably heard that Russians are obsessed with soup. They just can’t imagine a solid lunch without it, not to mention survive more than a week without hot liquid broth…

However, there is only one occasion when Russians eat soup in the morning (or first thing whenever they wake up) - that’s if they have a hangover. It’s believed that the more fatty soup the better to help dispel the aftermath of a raucous night. Chicken broth with noodles, borsch, or sour cabbage soup - anything works perfectly. Not to mention the nourishing Caucasian soups - shorba and khash - that are based on lamb’s broth.

You might want to try these soups with a shot of vodka… well, it can either act as a cure, or start the second round of the party. 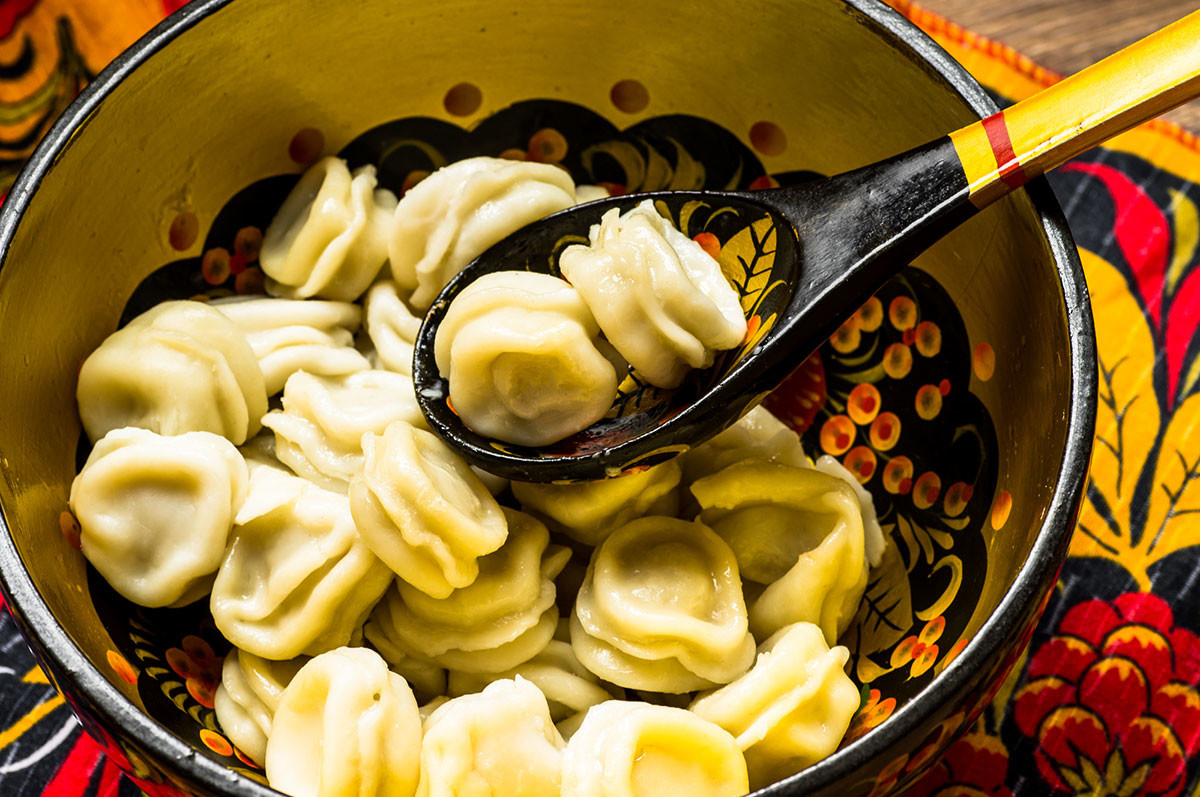 Many cultures have their own dumplings, and pelmeni is the Russian version of Italian ravioli, Polish pierogi and Chinese jiaozi. They are small pieces of dough stuffed with ground meat. Soviet housewives often used to make them in large quantities and then deep freeze them, ready to be quickly boiled for a hearty winter dish.

Pelmeni in modern Russia are sold frozen in stores and are considered a basic staple of bachelors and students. Boil these for breakfast and you won’t have to worry about lunch and will be full for half of the day or more!

A Russian soldier even shared a photo of his army breakfast - pelmeni served with canned corn… A bold combination! 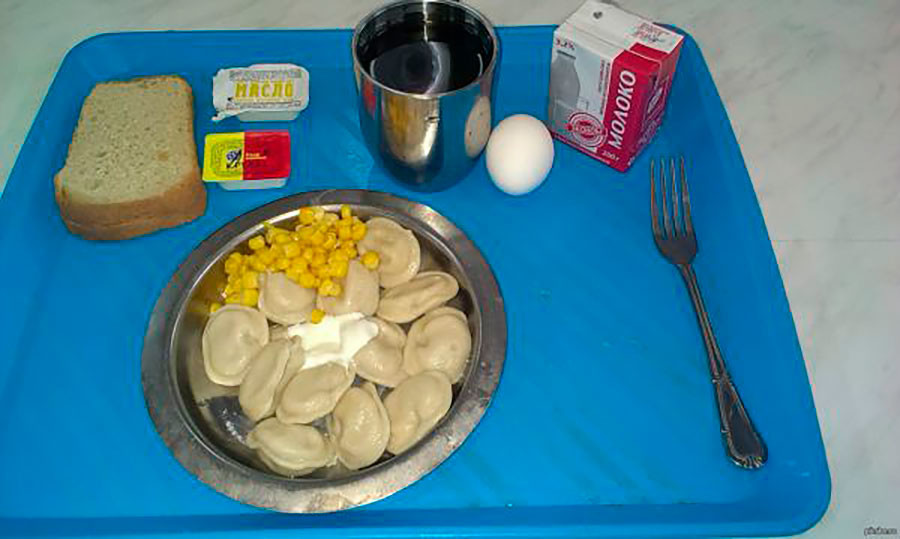 Normally, however, pelmeni is not a breakfast meal. 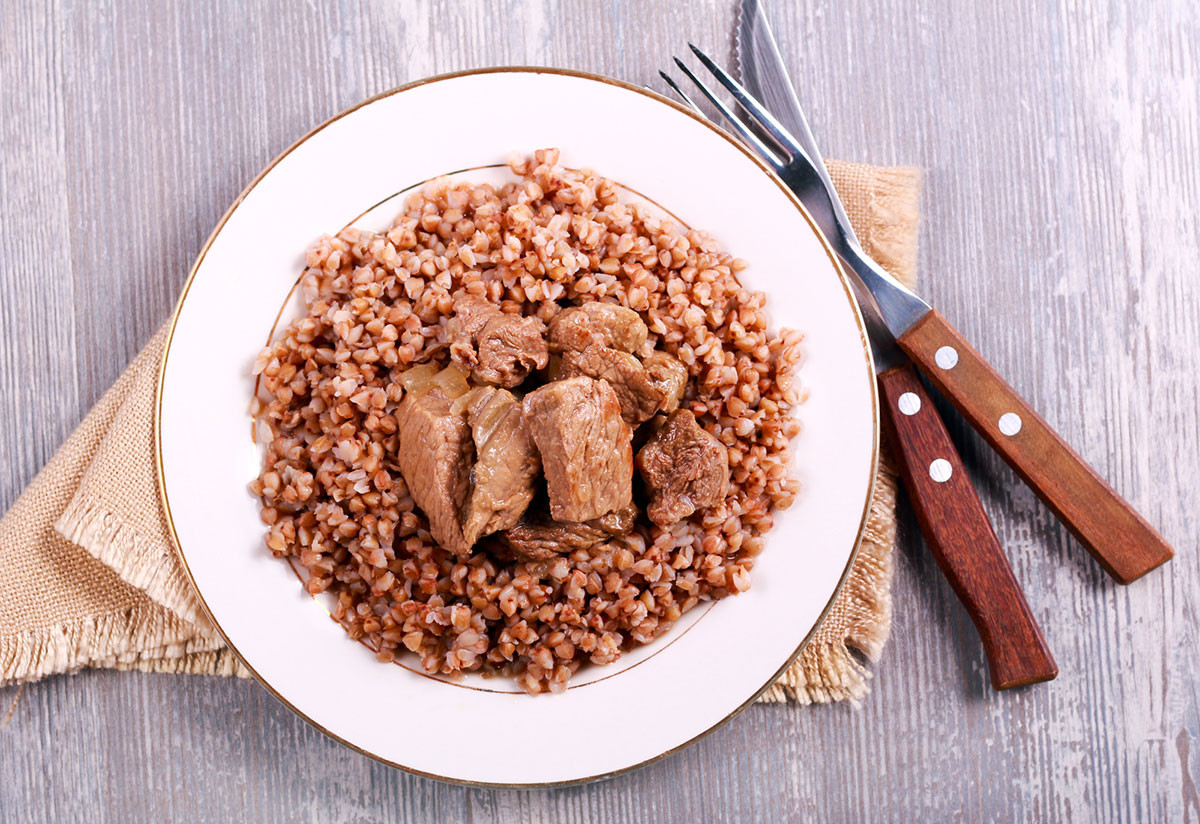 Well, Russians are obsessed with buckwheat (or grechka, as we call it), and there are plenty of ways to cook it (here are your 12 win-win recipes). Kids used to eat grechka with sugar and milk, but adding a fried egg to buckwheat makes it a great carb & protein meal... But grechka stewed with meat ragout… is that what you really want to have with your cup of coffee? Nevertheless, many Russians eat it with pleasure at any time of the day. 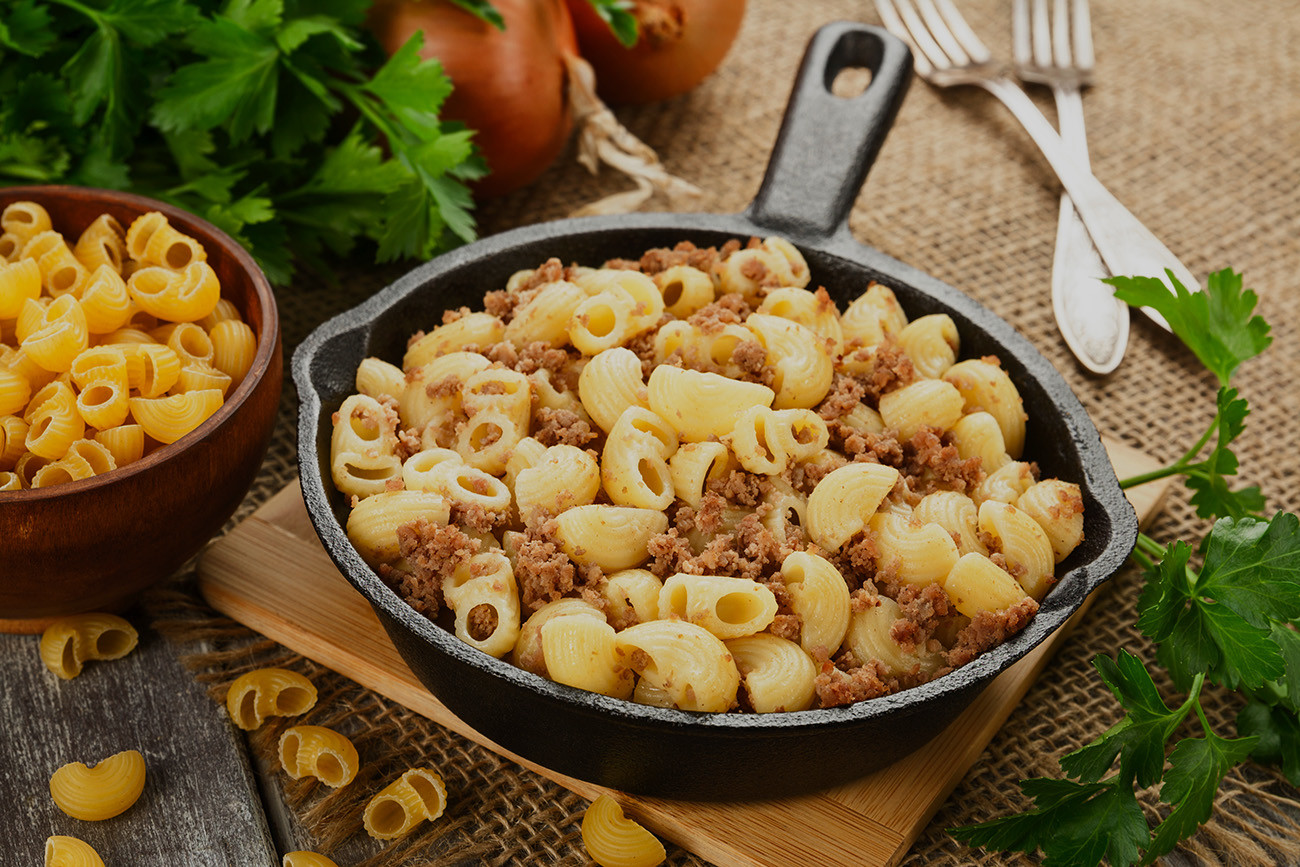 We don’t call it pasta! It’s ‘macaroni in the navy style’ (по-флотски - po-flotski). In a mysterious way this dish often appears in Russian houses together with borsch. We’ll reveal a secret - to make a good borsch broth boil much meat - but don’t use all of it for the soup. The remaining cooked meat is grinded, fried with onions and added to the macaroni - a favorite side dish of both kids and adults. This Soviet-era dish, just like meaty buckwheat, can still be seen on the breakfast menu in provincial sanatoriums, but working-class people also enjoy it before a long hard day.

By the way there is a legend on how this dish got its name. Russian sailors tasted pasta bolognese overseas and liked it so much that they asked the ship's cook to make it for them. As they sailed the oceans, they forgot the dish's original taste, or perhaps they just ran out of tomatoes, and the thrifty cook intentionally simplified the recipe. 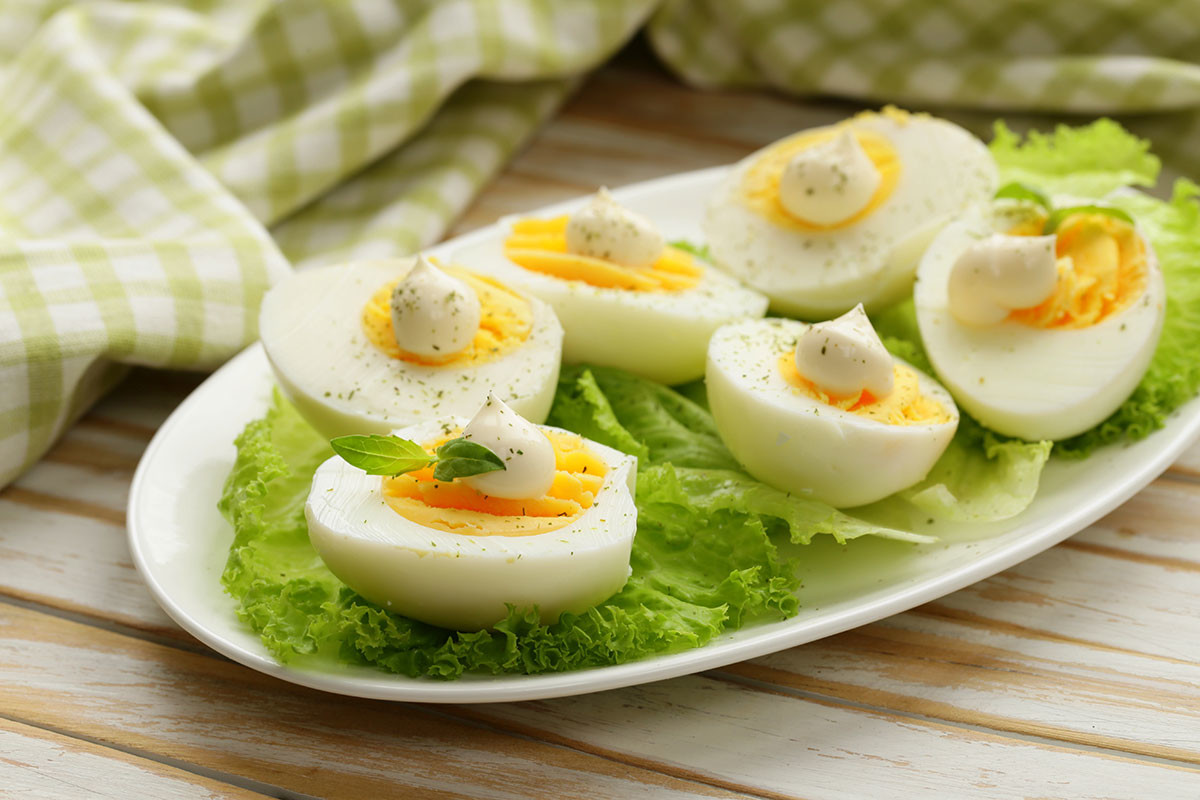 Boiled eggs is a typical breakfast, full of protein. But who would eat just a boiled egg? It’s boring… One should add red or black caviar… That can be expensive, however, so Soviet people found a solution and started adding mayo! Tasty spicy sauce became a replacement for all other dressings, and still remains incredibly popular in Russia.

Eggs cut into halves are aristocratically served with mayo on small plates - and you can even find this in Russian school breakfast menus. Probably not as a main course, but as an appetizer - really fancy… Add canned peas or canned corn and you can rock the start of your day!