Your complete guide to Russian dumplings 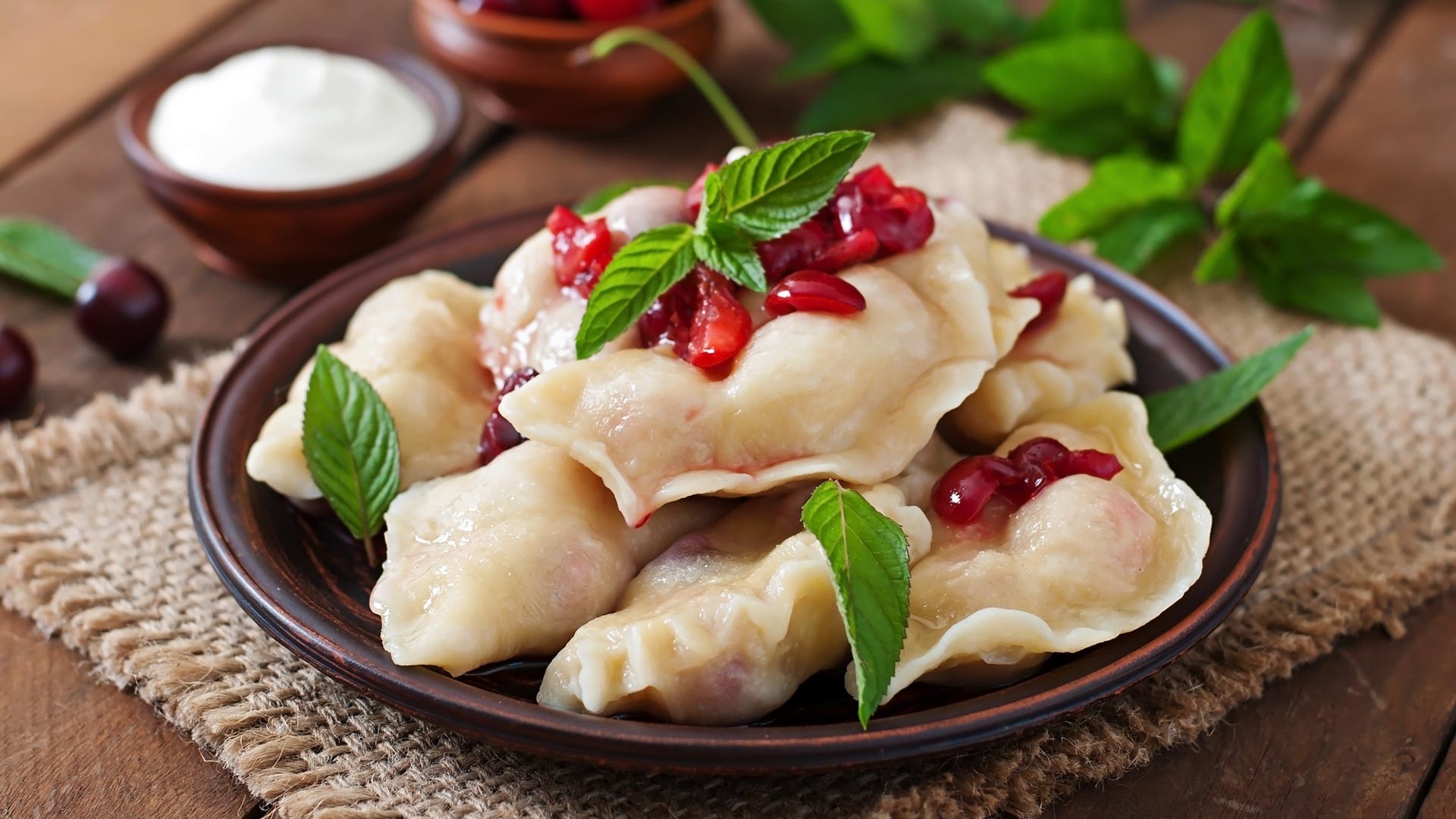 Legion Media
From all across the country, people used to make different types of dough and stuff it with various fillings.This way, the many “faces” of Russian dumplings appeared. Not just ‘pelmeni’, as you might have thought!

Probably one of the most popular Russian dishes, that is for sure served in every Russian cuisine restaurant, and is a very common homemade meal. To differentiate between all the types of dumplings, it’s worth taking a look at their size and shape. Pelmeni are typically really small and their dough is folded in half and then two edges are put together the way you see in the photo below. 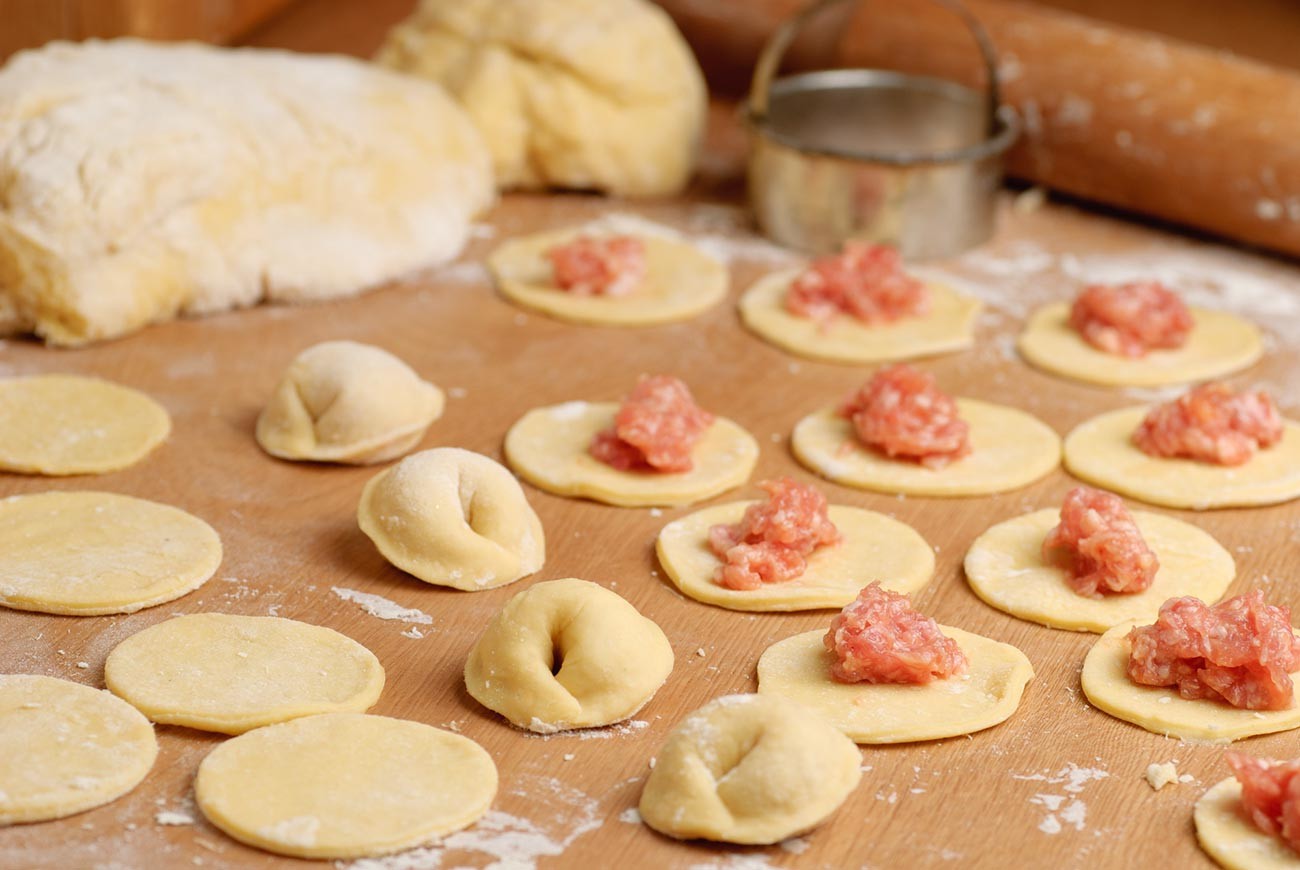 The dough for pelmeni is usually made out of flour, water and salt and the classic filling is ground beef and pork. These days, pelmeni are produced with all types of meat and fish and restaurants sometimes also serve such fillings as moose or wild boar meat.

Pelmeni are considered to have their origins in the Urals; however, many Russian regions have their own version of them. (Here are some recipes for you).

Pelmeni also have a reputation of being food for bachelors and students, because they are extremely easy to cook - just put frozen pelmeni (easily bought in any grocery store) in boiling water and let cook for 4-5 minutes. However, Russian families also used to gather in the kitchen to make pelmeni together, лепить (lepit’), which means sculpting them from a giant piece of dough - with the kids also helping!

Vareniki’s closest “relatives” are probably Polish pierogi. It’s a dumpling where the dough is just folded in half and then tipped with fingers or fork so that the filling doesn’t spill out.

The dough can be prepared like that for pelmeni, or with yeast, or even with kefir. And the filling can literally be anything! From meat, potatoes, mushrooms, cabbage and other vegetables to cottage cheese; and sweet fillings from berries and fruits to nutella and jam. They are usually served with sour cream.

Actually, the word ‘vareniki’ is formed from the verb “варить” (varit’), which means “to boil” in Russian. So we don’t really have to clarify how to cook vareniki, right? 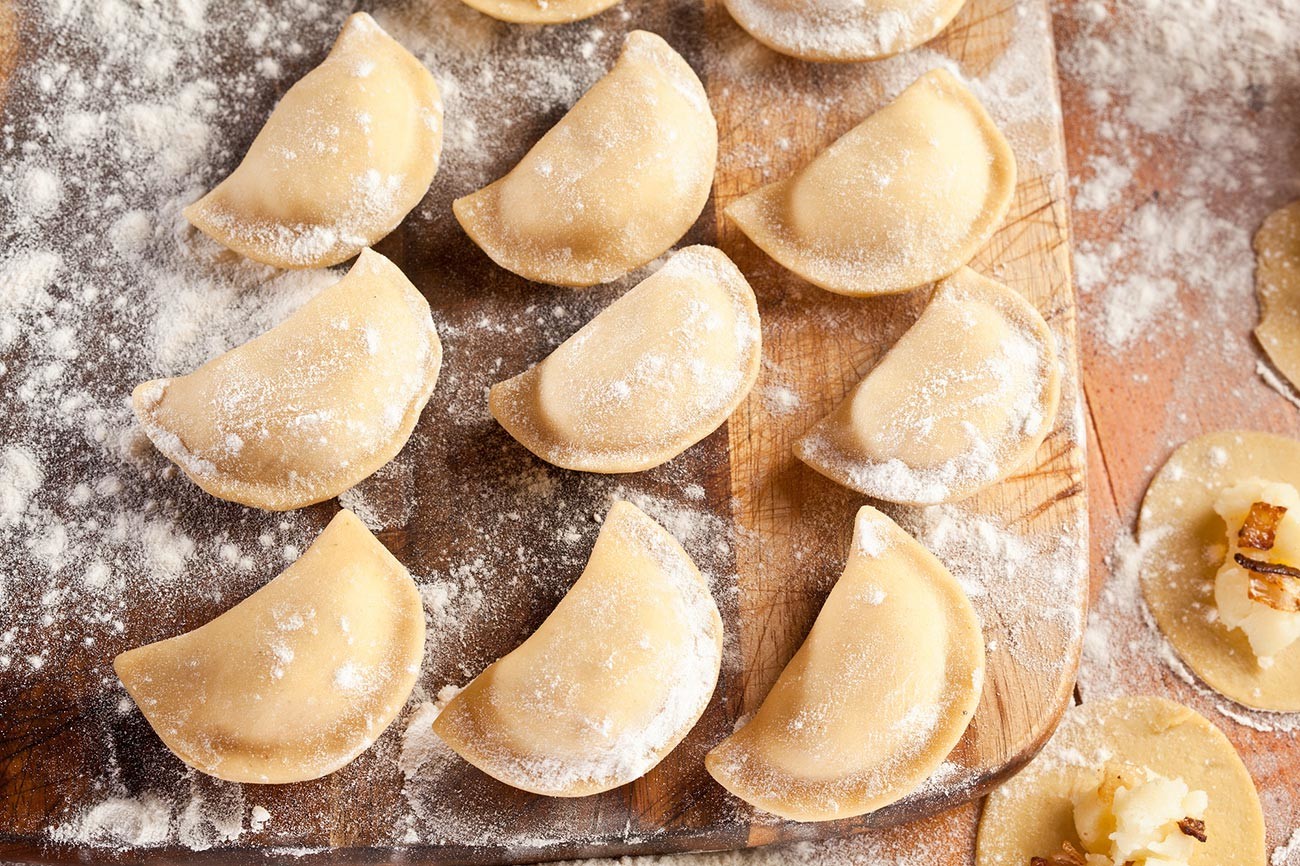 Vareniki have origins in Ukranian cuisine and they have been known since the 18th century, when Ukraine was part of the Russian Empire; so they have also been a close part of Russian cuisine.

Russian writer born in Ukraine, Nikolai Gogol in his great work Night Before Christmas (from Evenings on a Farm Near Dikanka collection) depicts a scene with vareniki. A character sits in front of two bowls: one is filled with vareniki and another with sour cream. Upon the incredible magic power that the character has, the vareniki, one by one, jump into the bowl with sour cream and then right in the character’s mouth, without him using any forks or hands! A dream for everyone who has ever tried this delicious dish!

A Caucasian take on dumplings. The classic version is an unleavened water+flour dough and a filling made of chopped meat (usually beef, pork or lamb) dressed with black pepper and traditional Caucasian seasoning: cilantro, cumin and others.

In terms of its shape, khinkali is the most difficult dumpling. It’s bigger than pelmeni or vareniki, and they have to be formed in a way that they have a “tail” with 18 “wrinkles” on it. Only an experienced Caucasian chef can do this. Khinkali are usually served not on a plate, but on a big tray. 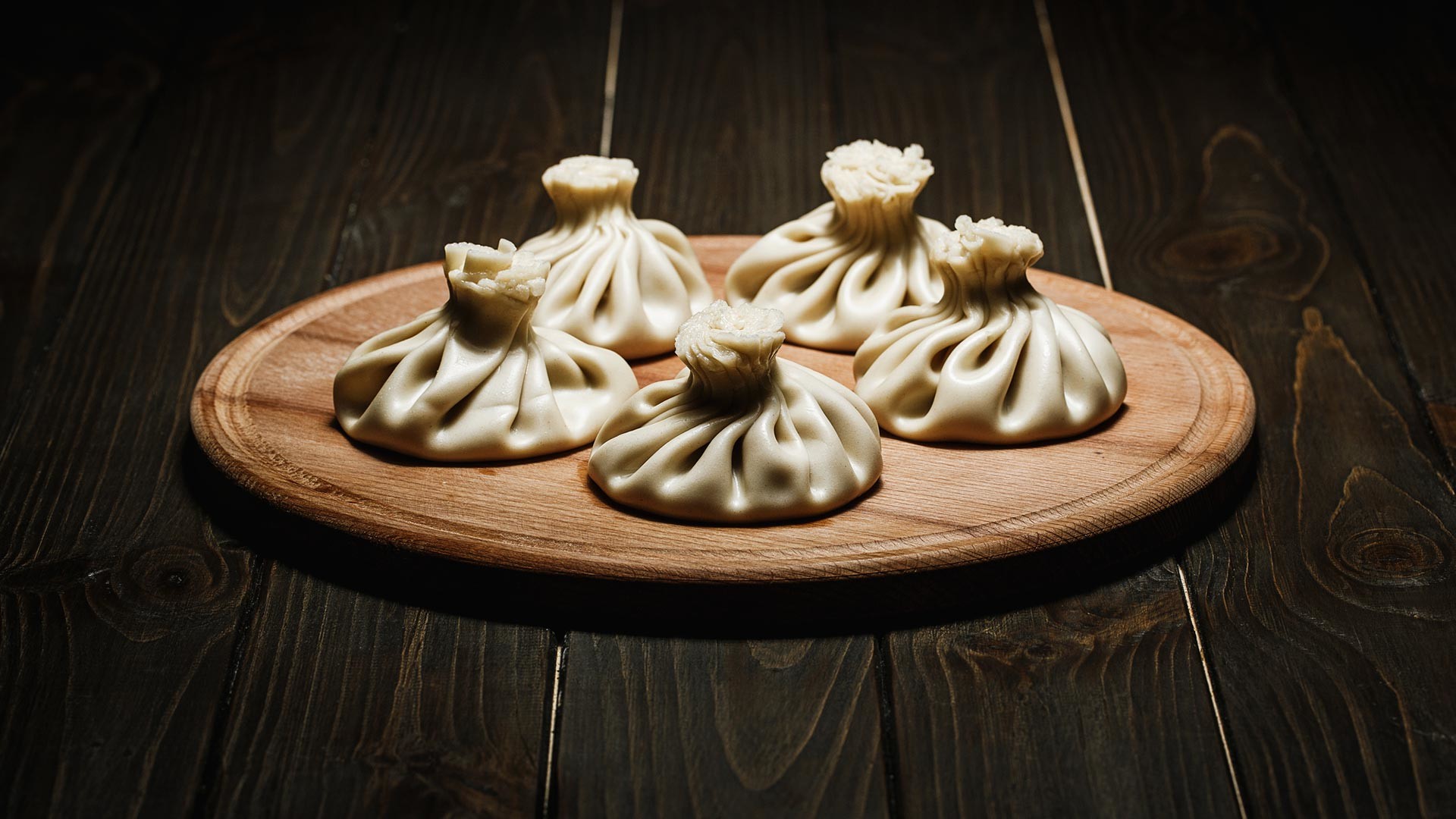 The main rule about khinkali is that one has to eat them with your hands, not with cutlery. If you don’t have a Gogol character superpower, then you have to take khinkali by their “tail”, bite a piece off, then drink the broth oozing from them, or let it pour onto a spoon and only after that, eat the rest of khinkali carefully with your fingers. If you ever happen to be in the Caucasus and try to eat khinkali with a fork and knife, people will think you are crazy!

As Caucasian cuisine is quite popular in all the big Russian cities, restaurants serve incredibly many types of khinkali: not only with meat, but also with cheese, fish, mushrooms - and not only boiled, but also fried! Which is also very tasty, by the way.

Watch our culinary trip to Caucasian republic of Dagestan, where our host tries all the local food!

This dish has roots in Turkic cuisine and was widespread in Central Asia and the Caucasus. The Russian peoples of Karachays and Balkars have manty in their national cuisines. At the same time, manty were widespread in Kirgiz, Kazakh, Uzbek and Tajik cuisines of the Soviet Union, so it still is very popular around all the post-Soviet countries, including Russia.

The main thing you need to know about manty is that they are steamed. There are even special “manty cooker” pans with several layers. 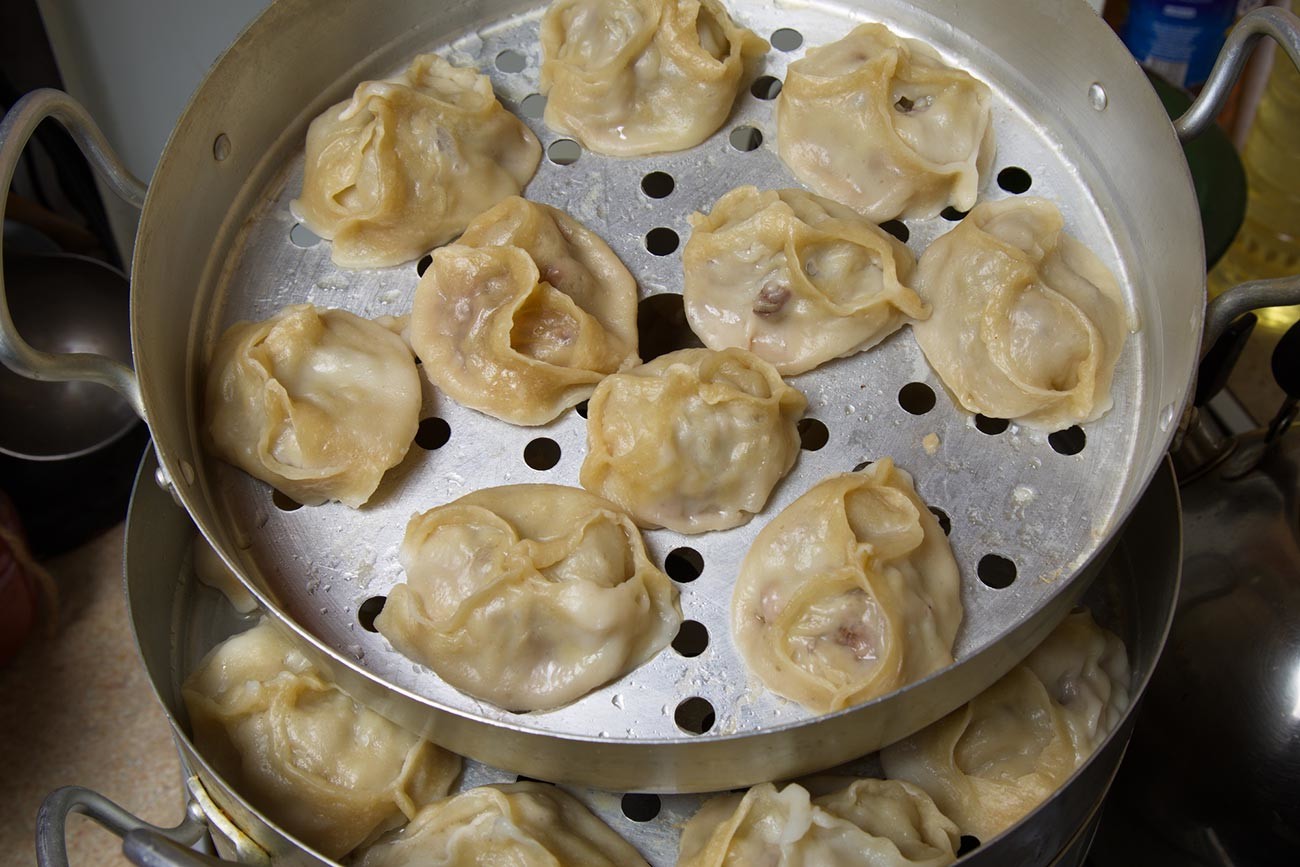 Manty can be filled with any fillings, with the most classic being minced or chopped meat with onion. Also, pumpkin is often added to give the dish a nice sweet flavor. There are several types of manty forms that are actually not so easy to sculpt!

If you ever travel on the Trans-Siberian railway, or go to Lake Baikal, be sure to try some pozy a.k.a buzy! This is a national dish of the Russian republic of Buryatia and is also very popular in the neighboring Irkutsk Region (both regions where Lake Baikal is situated). Check out a video where our travel host goes there and tries some! Buzy is also a national Mongolian dish. 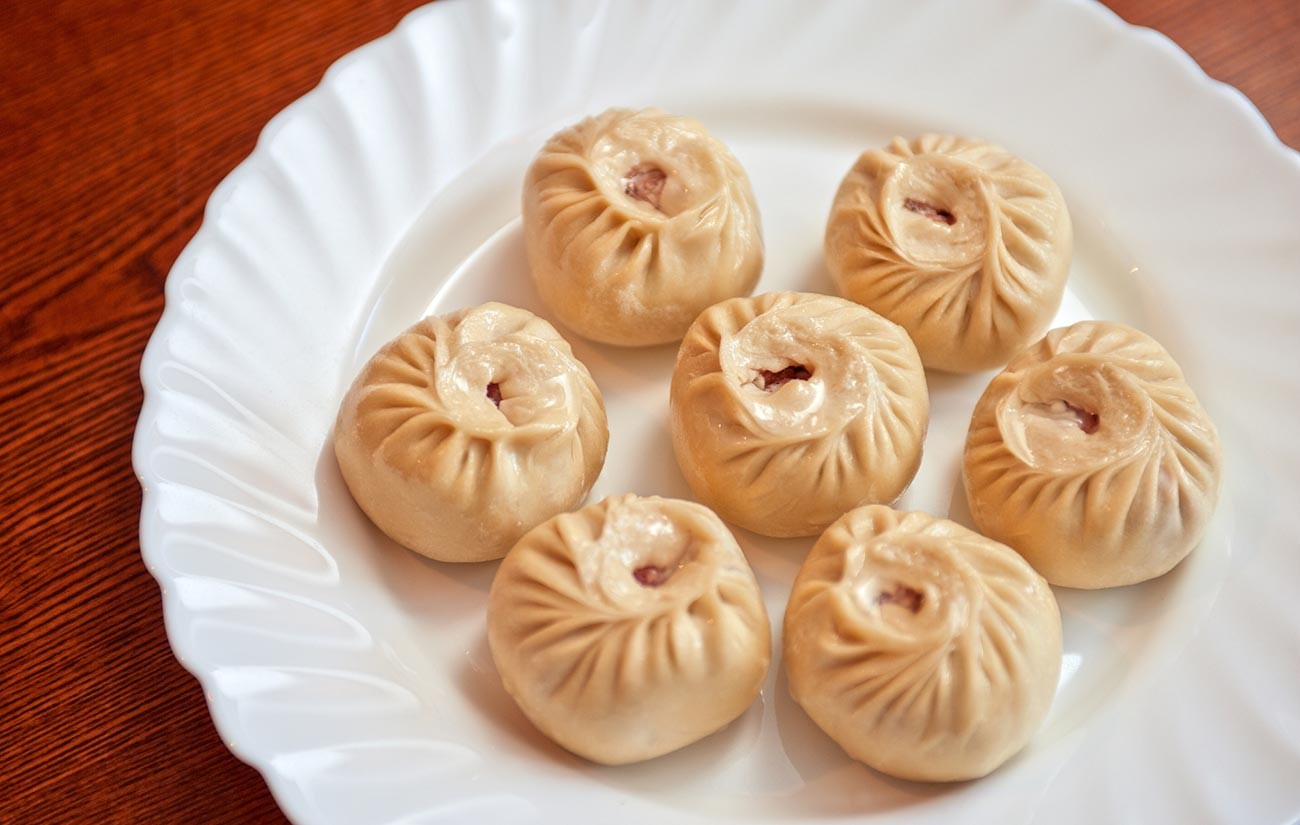 Pozy are “relatives” of manty and are also steam cooked. The filling is usually also meat with onion. As for their form, they have some similarities with khinkali and also should be eaten with one’s hands and firstly sipping the broth from them. But, instead of khinkali’s 18 wrinkles, the pozy’s dough needs to be “pinched” 33 times! And they also have a hole on top. 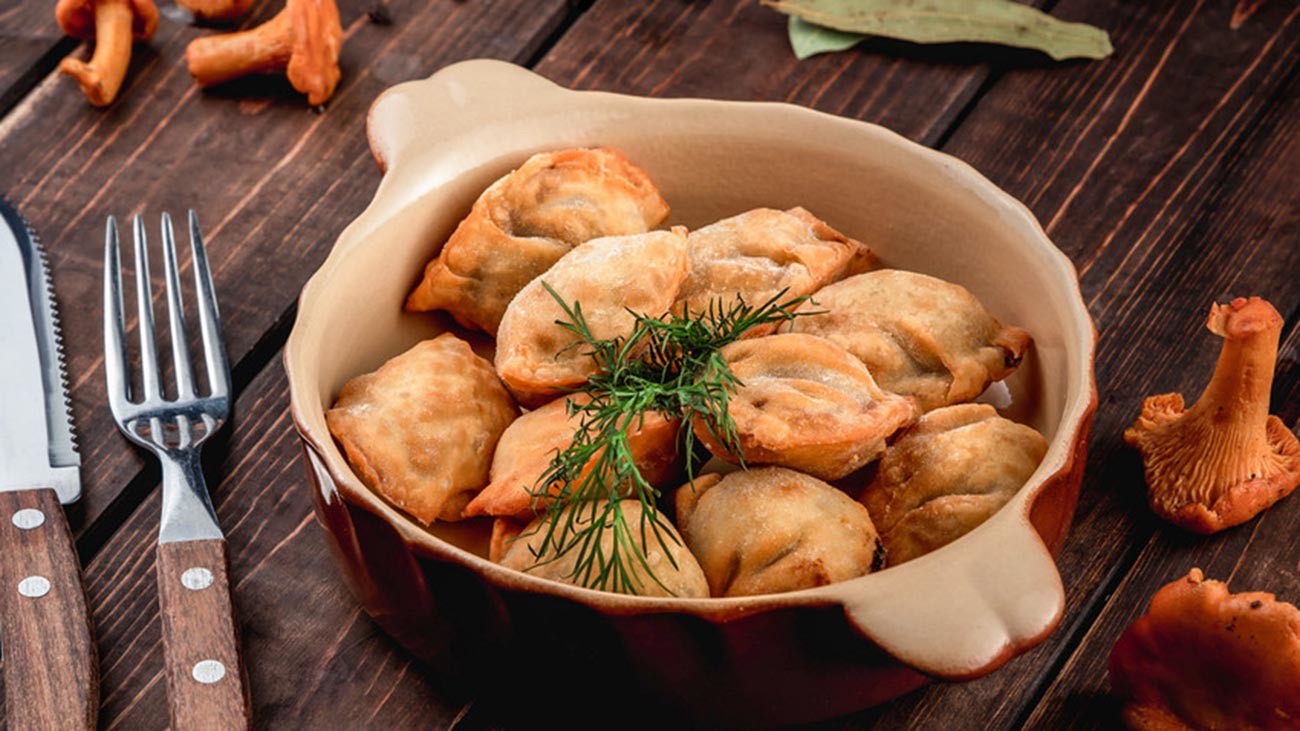 This dish is rare and far less known, but considered very ancient. The filling typically consists of mushrooms and usually some groats added, for example, Russia’s favorite buckwheat (grechka). And it’s deemed a vegetarian dish, so it’s never made with any meat!

Kundiumy usually have the form of a triangle (similar to empanadas) and are baked in the oven and then steamed on low heat for a long time together with mushroom broth. A very unusual and nice method! Read more about them in a cookbook of an American writer who became inspired by them.