Eat your way to Russia with this Northern dish - “shangi” (RECIPE) 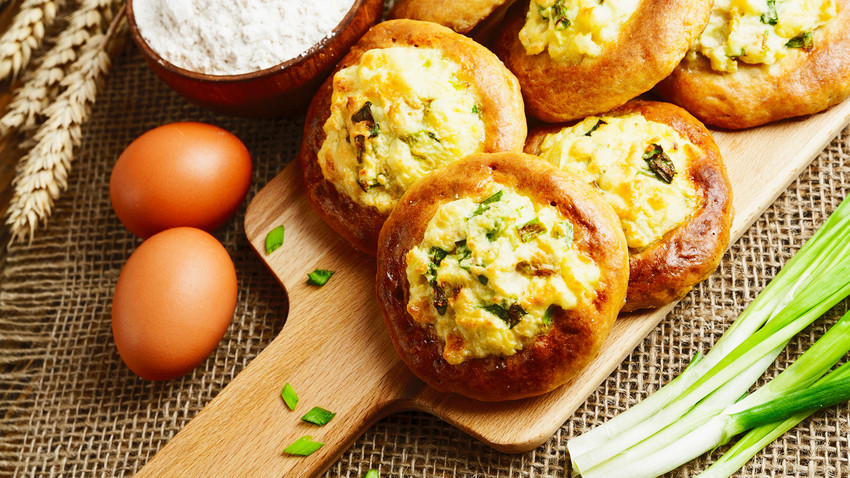 Try out this old but not forgotten Russian dish!

Legion Media
Soft as a pillow, crunchy on the edges and stuffed with various rich fillings – Russia’s shanga pie is wickedly delicious!

Our Russian babushkas (grannies) knew how to feed their large extended families with just the minimum amount of ingredients. I still remember how as a child I couldn’t wait for Saturday morning to go with my parents to the countryside to have a bite of shangi, those fresh and soft buns fresh from the oven. I never thought that one day I’d be able to cook them myself. But the time has come, and now I have the recipe and ingredients at my fingertips, as well as culinary abilities.

Shangi, or shanezhki (affectionately),is a traditional Russian dish that initially came to us from the Russian North; then spread to the region of Karelia, and from the 17th century onward, with colonists to Western Siberia. Today, this dish is widespread in the Russian North, in the Ural region, and is relatively little known in Russia’s western and central regions.

Apart from the traditional Russian well-known pirogi, shangi can be different in size – from 12-15 centimetres in diameter, and up to 30 or even more if they’re baked in a Russian stove.

Originally, shanga had the form of a round bun richly stuffed with a considerable amount of filling, and it was made of sour thin yeast dough, while the filling was bland. The filling  can depend on your imagination, but potatoes are often used. In today’s recipe I use potatoes with mushrooms for variety. In order not to beat around the bush any longer, I suggest we start cooking this delicious pie. 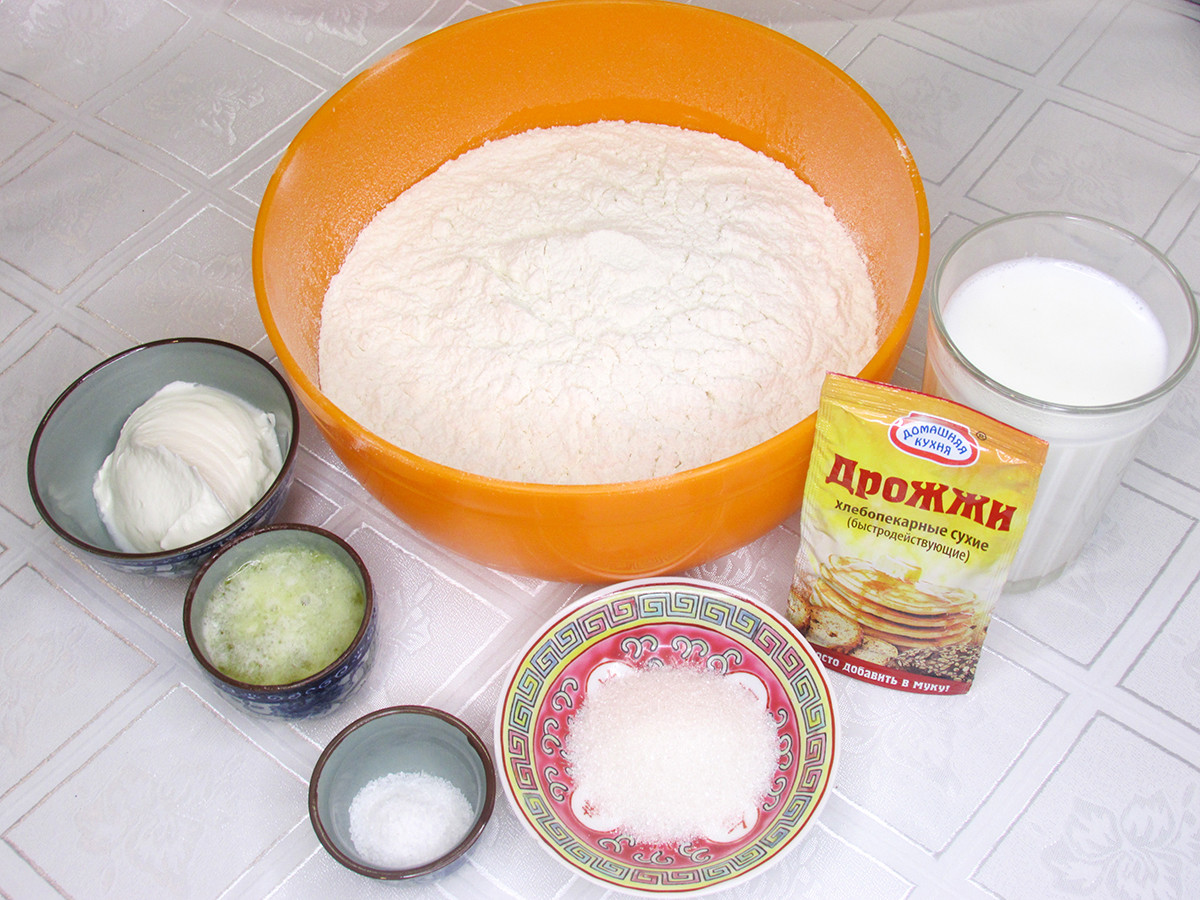 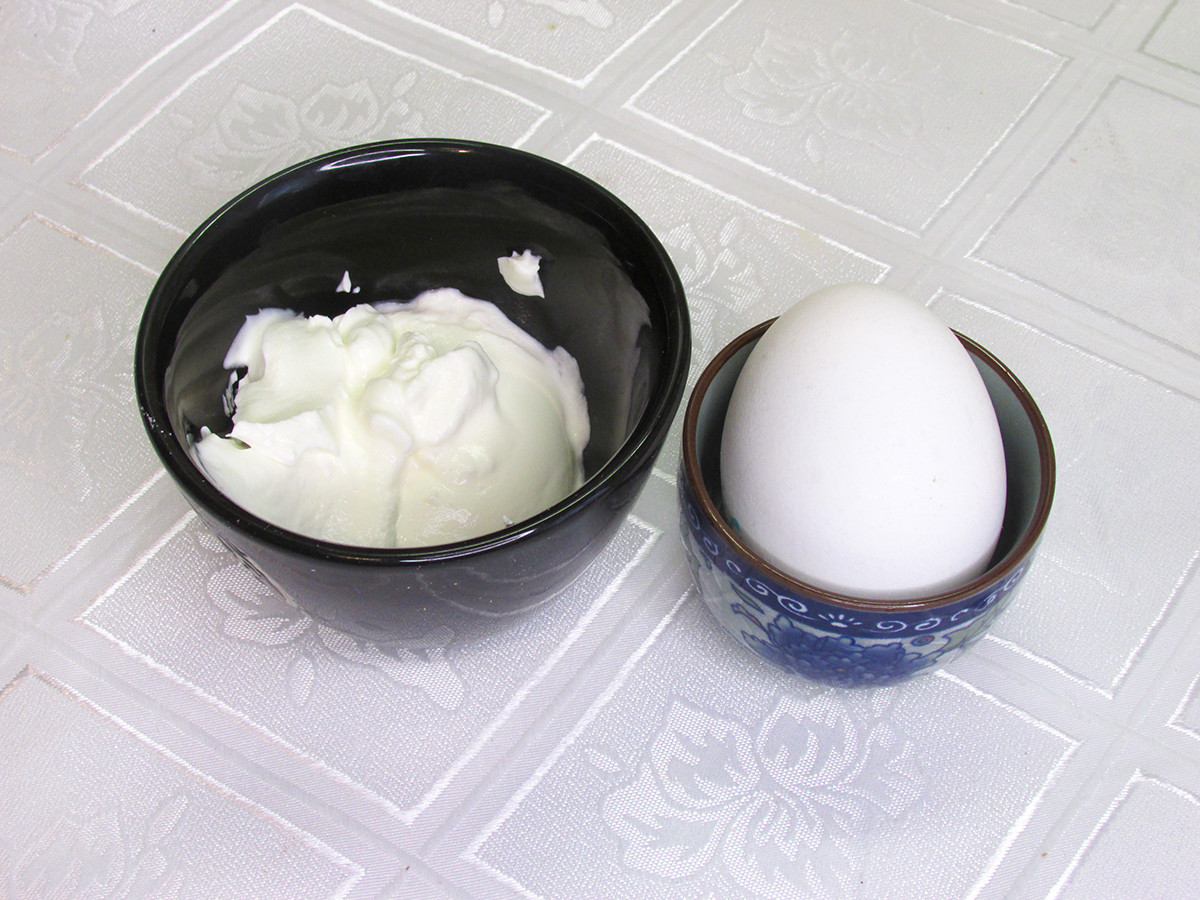 1. First, let's make the dough. Heat the milk a little, then add sugar. Pour in the yeast and stir the mass with a wooden spoon. 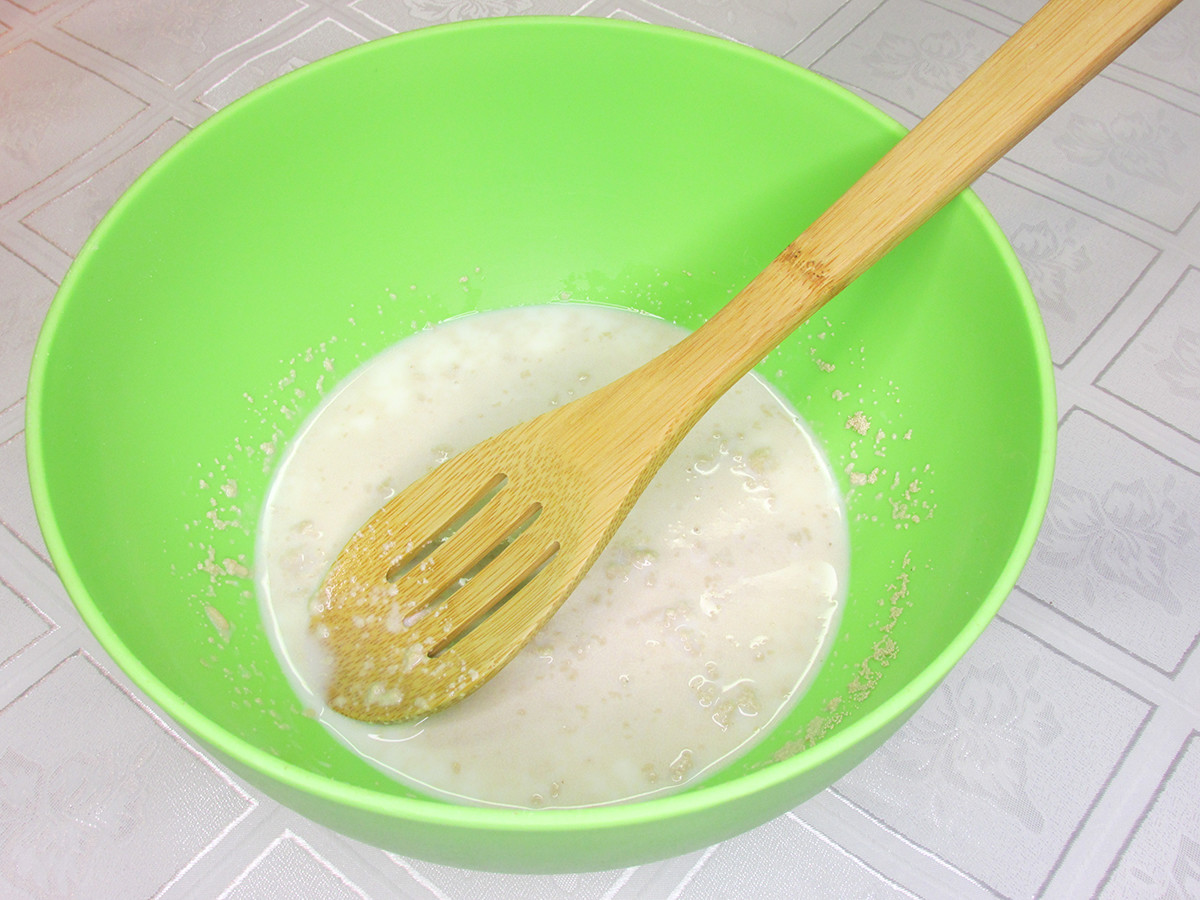 2. Add the sour cream, salt and the melted butter to the mass; mix everything well and add flour portionwise. Divide the process of adding the flour into 3 steps. When adding the flour for the last (third) time, it will become very difficult to stir, so pay attention, because you may need a little more or less flour. But don’t worry, the dough will take as much flour as it needs, just do everything smoothly and one step at a time. 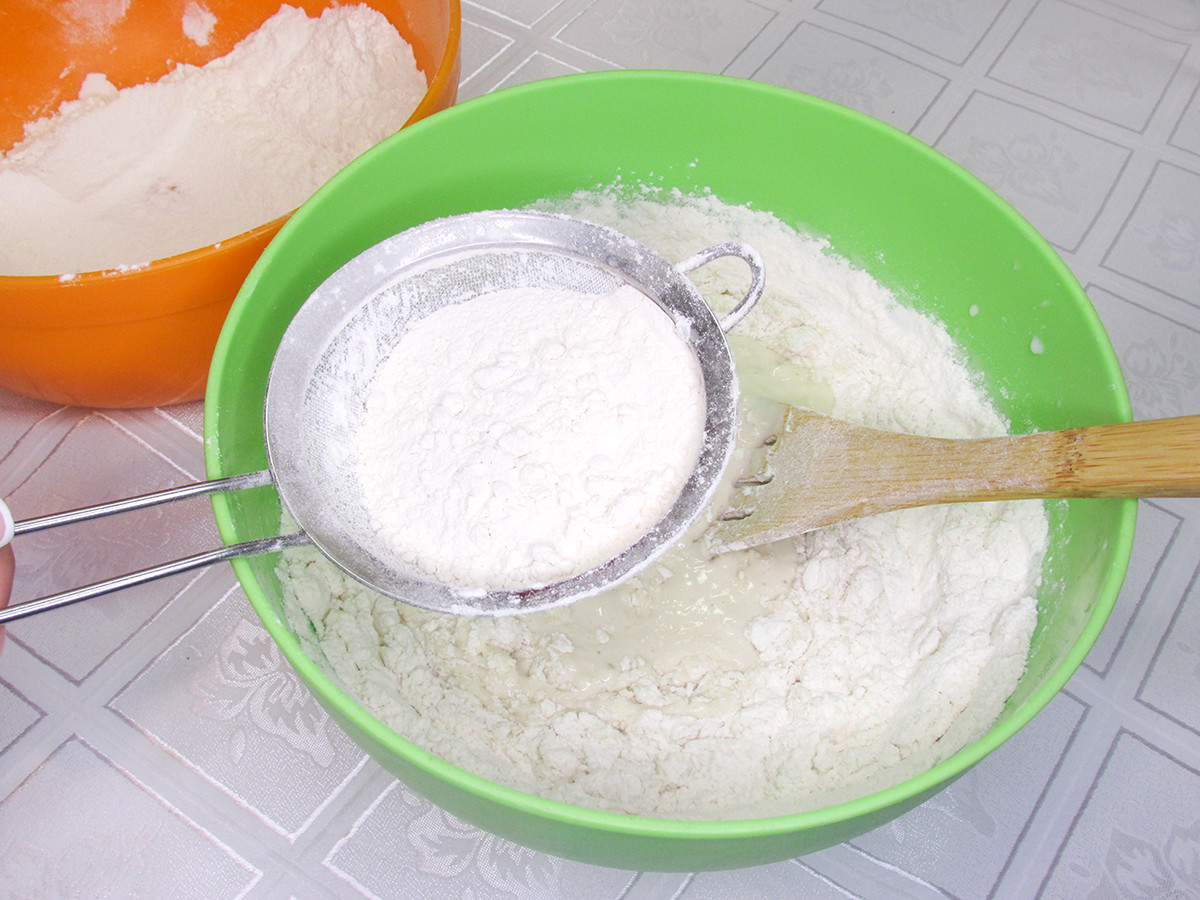 3. Eventually you’ll get the dough ball as seen in the photo. Cover the bowl in which the dough is with the kitchen towel and put it in a warm place for 40 minutes to rest. The dough will rise. 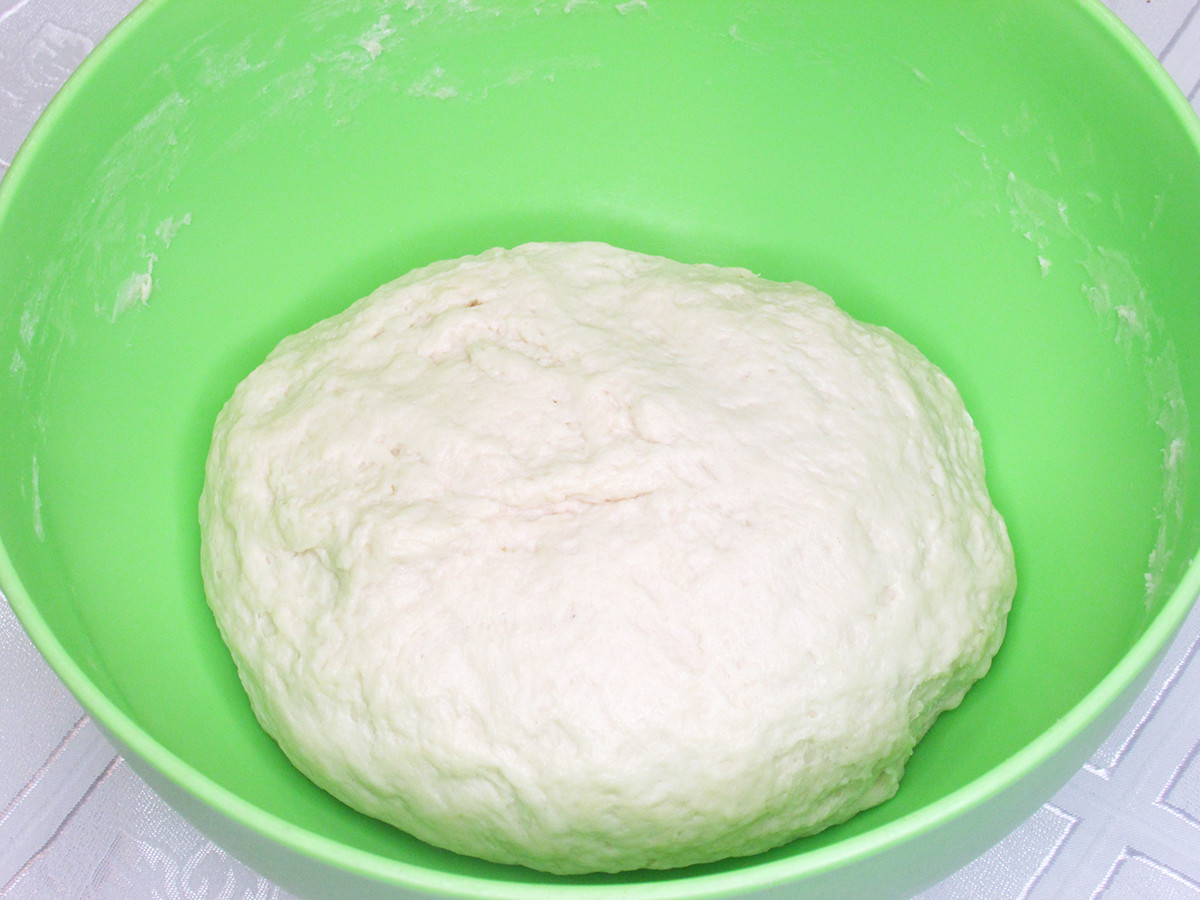 4. While the dough is still sitting, let’s get down to the filling. Peel the potatoes, place in the saucepan, then cover with water, add salt. Bring the water to a boil and stew for 20 minutes until the potatoes are soft inside. 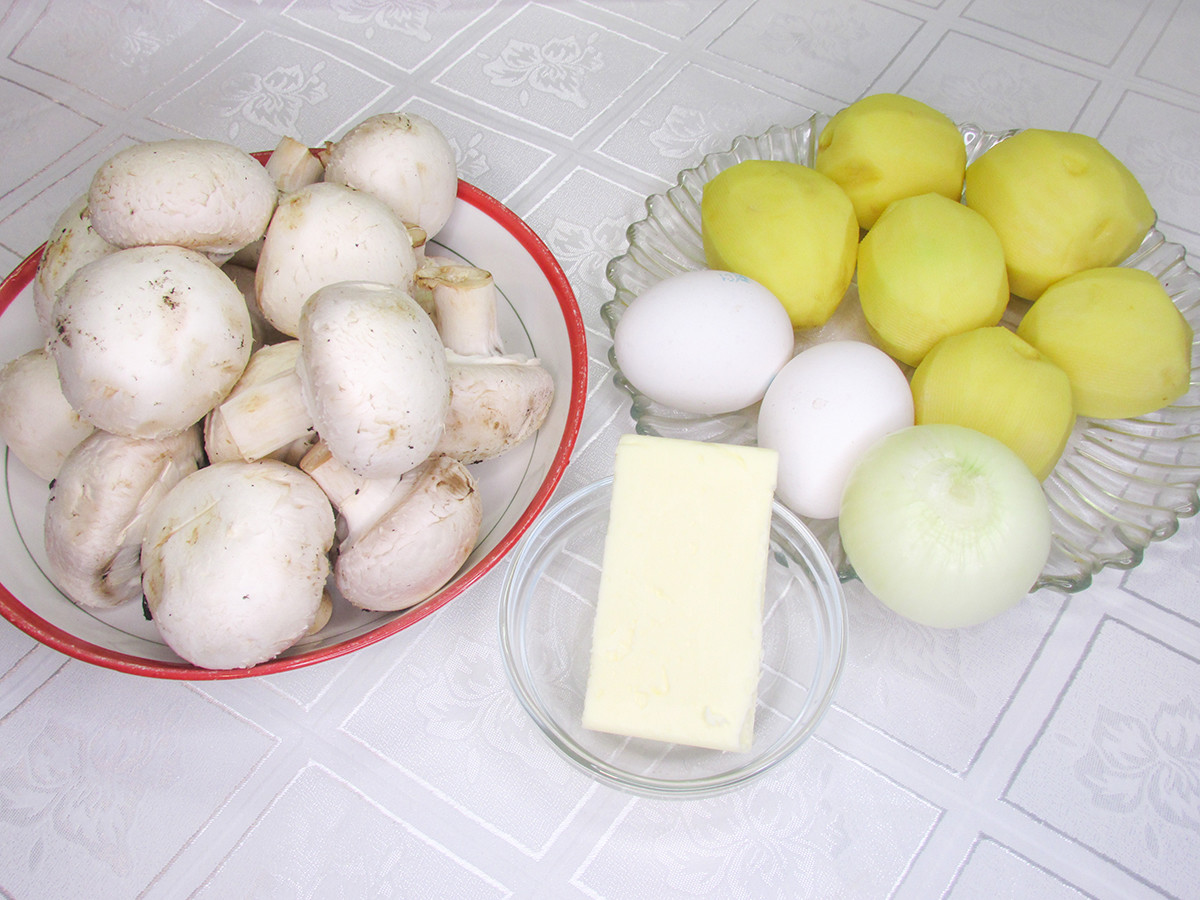 5. Then pour out the water and make mashed potatoes. Add butter and 1 egg; mix well. 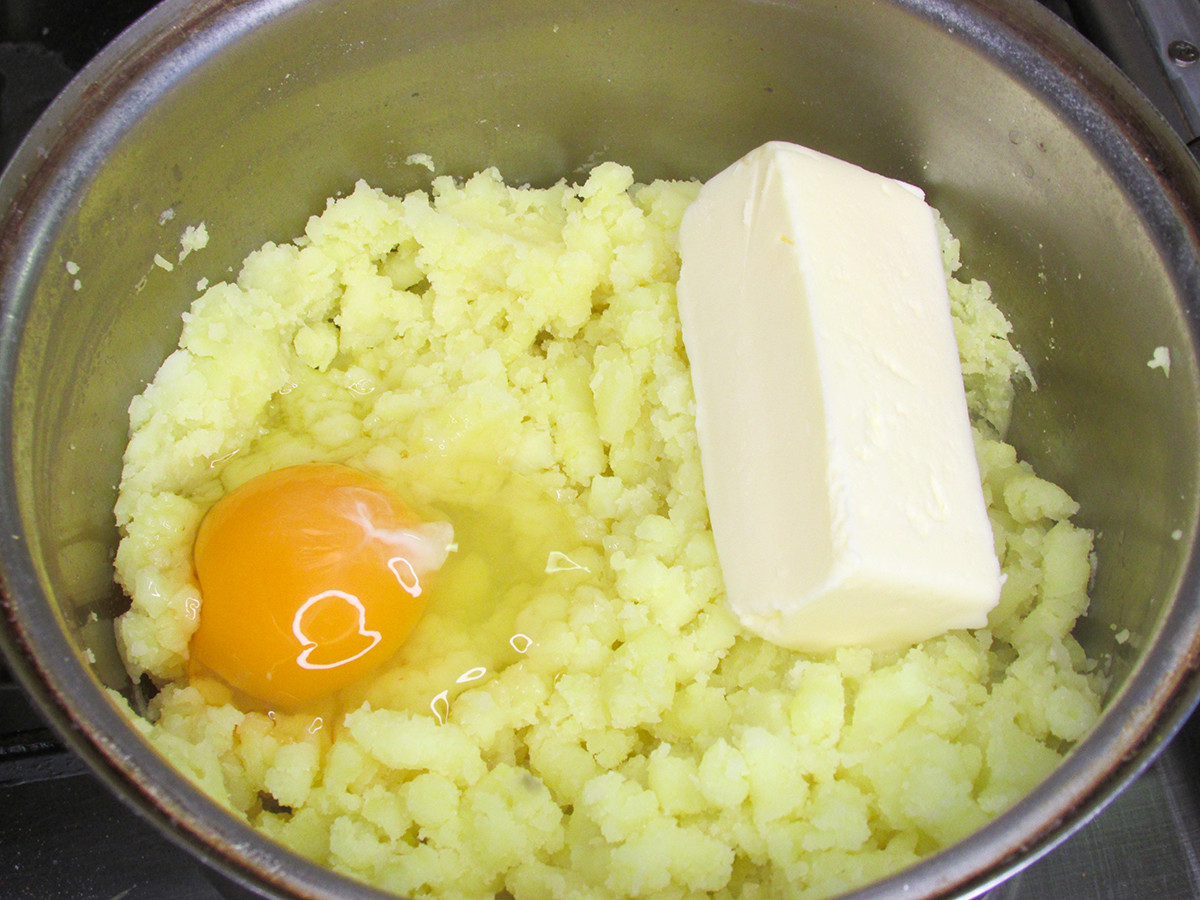 6. Chop the mushrooms and an onion, fry for a while on medium heat and add spices to taste. When the mushrooms are ready, mix with the mashed potatoes and add dill and parsley, if you wish. Our filling is ready. 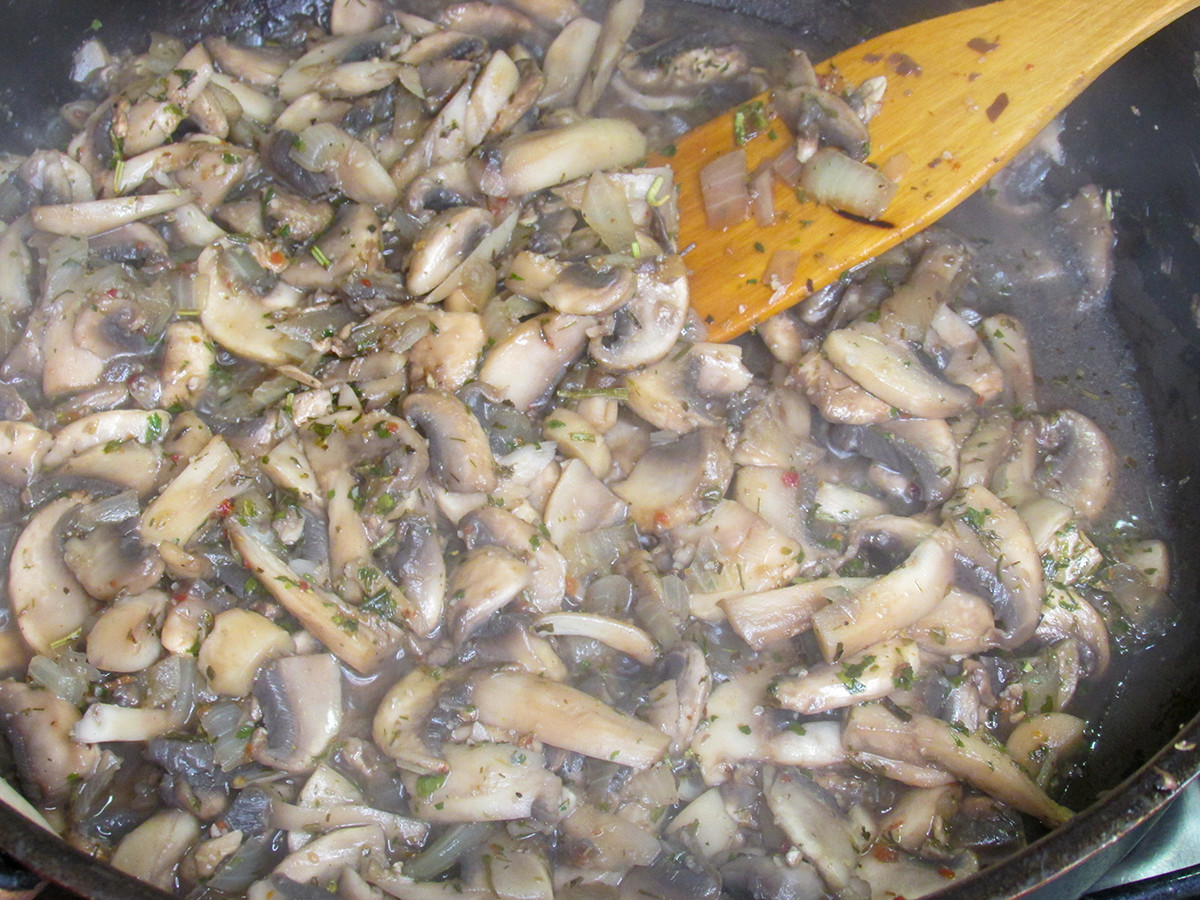 7. Let’s return to the dough. Divide it into equal parts (you’ll have about 15 pieces), and pour a little bit of flour on the surface. Then put the first piece of dough on the surface and form a ball of 12-15 centimetres in diameter. Add a considerable amount of filling on top of the round piece of dough, and form an open pie as shown in the photo or as your imagination wishes. Repeat the same procedure with the remaining pieces of dough. Put them on the baking sheet lined with parchment paper. 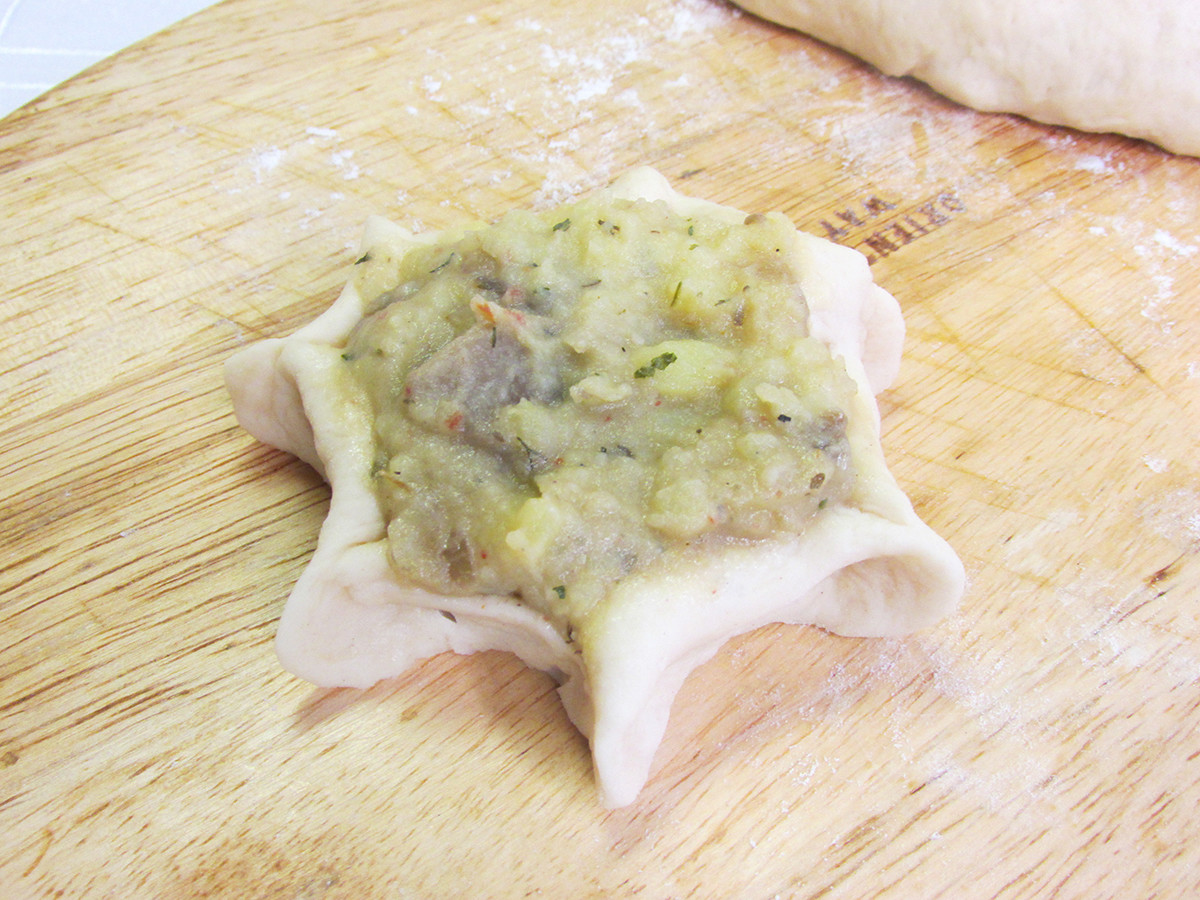 8. The easiest part is the greasing – just mix 1 egg with the sour cream and then richly grease every bun with it. 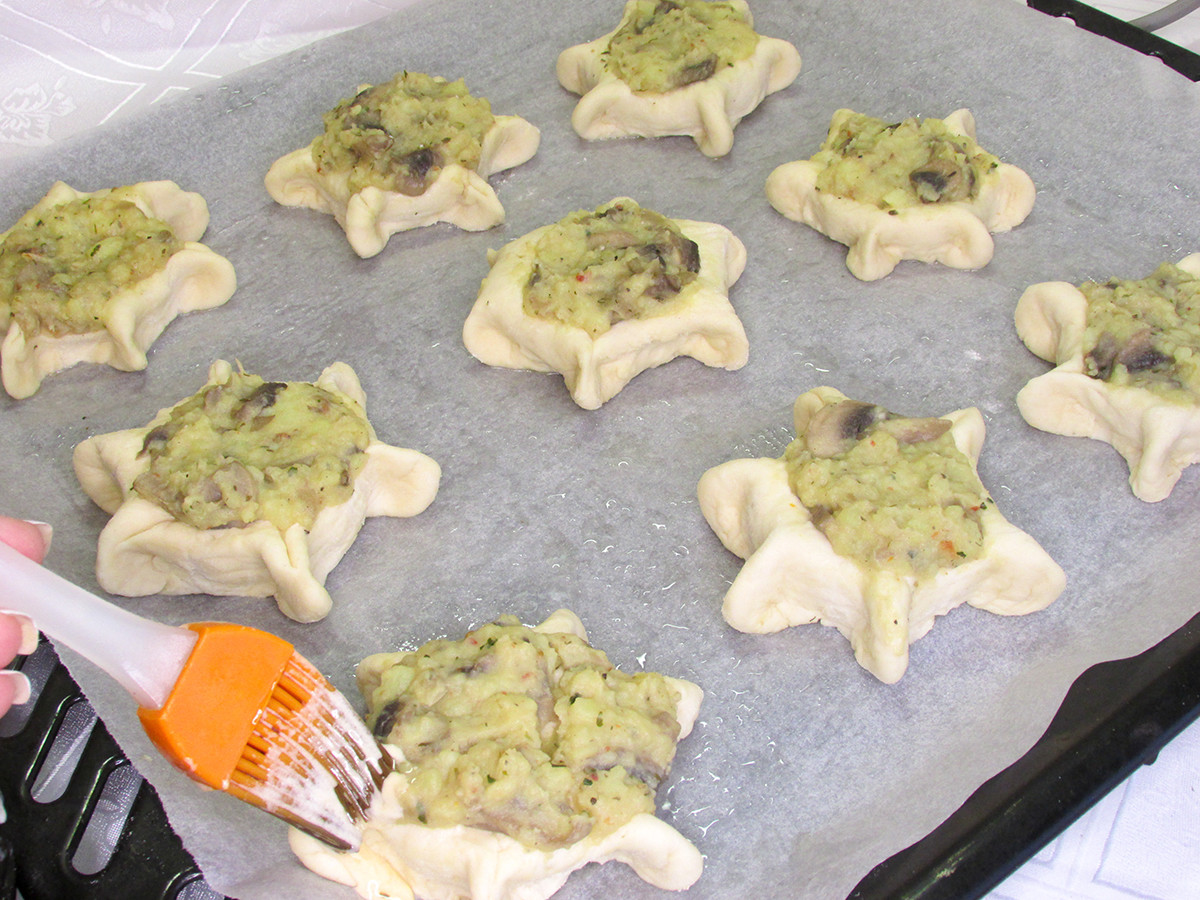 9. Bake shanezhki in an oven preheated to 180 degrees Celsius for 15-20 minutes.

10. Take shanezhki out of the oven, sprinkle with water and let cool a little on the plate under a kitchen towel. While they are sitting, make some hot tea or milk, and by the time the table is set your shanezhki are ready to be served. Enjoy! 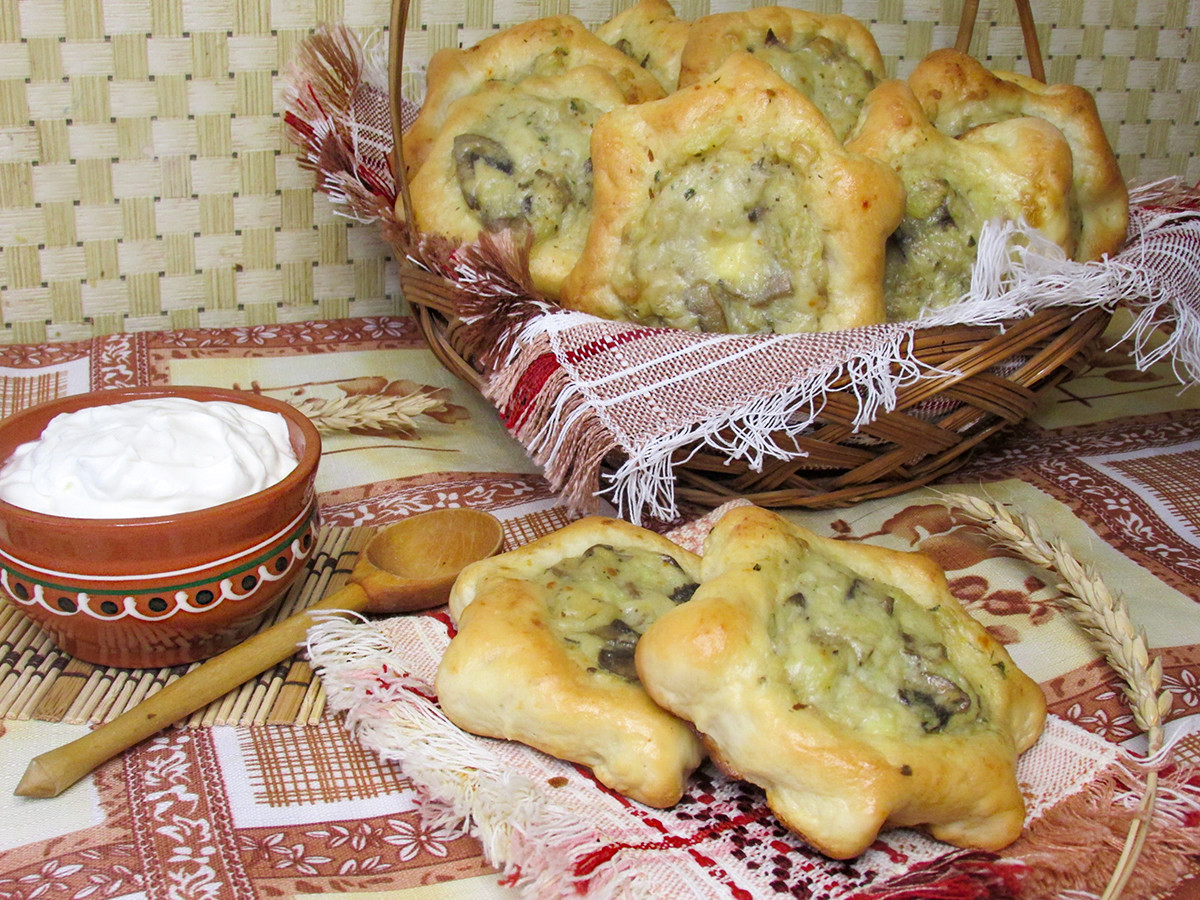