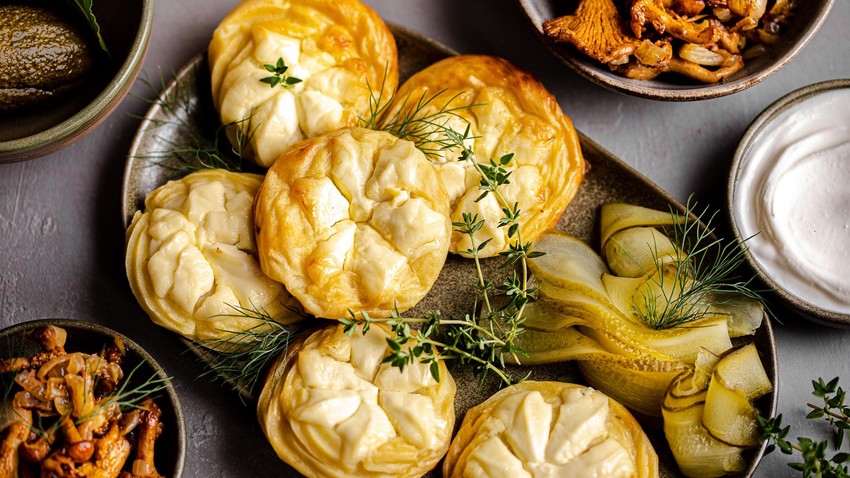 Yulia Mulino
This traditional dish ‘kokorki’ from the Tver Region resurrects a forgotten way to prepare and enjoy potato puree.

Potatoes were introduced to Russia during the time of Peter the Great, at the end of the 17th century. This new plant from the American continent was first adopted by the regions near St. Petersburg and Moscow, and the Tver Province was one of them.

Originally, kokorki was the name for a simple wheat bread that barge haulers used to take as their main meal for hard long trips along the Volga River. Later, this name was borrowed for pies with potatoes. Nowadays, kokorki are known as potato flat cakes baked in an oven with sour cream on top.

For this article I used a classic product combination to keep the dish authentic. However, there will be an essential adjustment to emphasize the original taste. I strongly recommend using the following trick to make kokorki even more delicious. The main ingredient is certainly boiled potatoes. While boiling add an onion and a bay leaf. Boiled onion sounds scary, doesn't it? Don’t worry! The onion will become so soft that it disappears in the mashed potatoes, and you will be surprised with the amazing flavor it gives to the dish. I also added garlic powder to the potato paste.

Another significant twist is the way of forming kokorki cakes. What makes the potatoes stick together is the flour and an egg. In order to keep kokorkis tender, don’t use much flour. But it’s quite tricky to make pretty round pies out of the soft dough, and the styling is crucial. I used a pastry bag instead, both for potato dough and sour cream. It only looks complicated; in fact, it saves your time and makes the process less messy. One important note about the sour cream - it should be rather rich, about 35 percent fat. That’s why I use creme fraiche.

Traditionally, kokorki are garnished with fresh greens and yoghurt. The best way to serve them is with mushrooms and pickles. I’ve chosen my favorite seasonal ones, chanterelles. Kokorki can be served as a warm starter or a side dish for meat or fish.

I’m sure you and your family will appreciate their sumptuous look, soft texture and creamy but pungent taste. 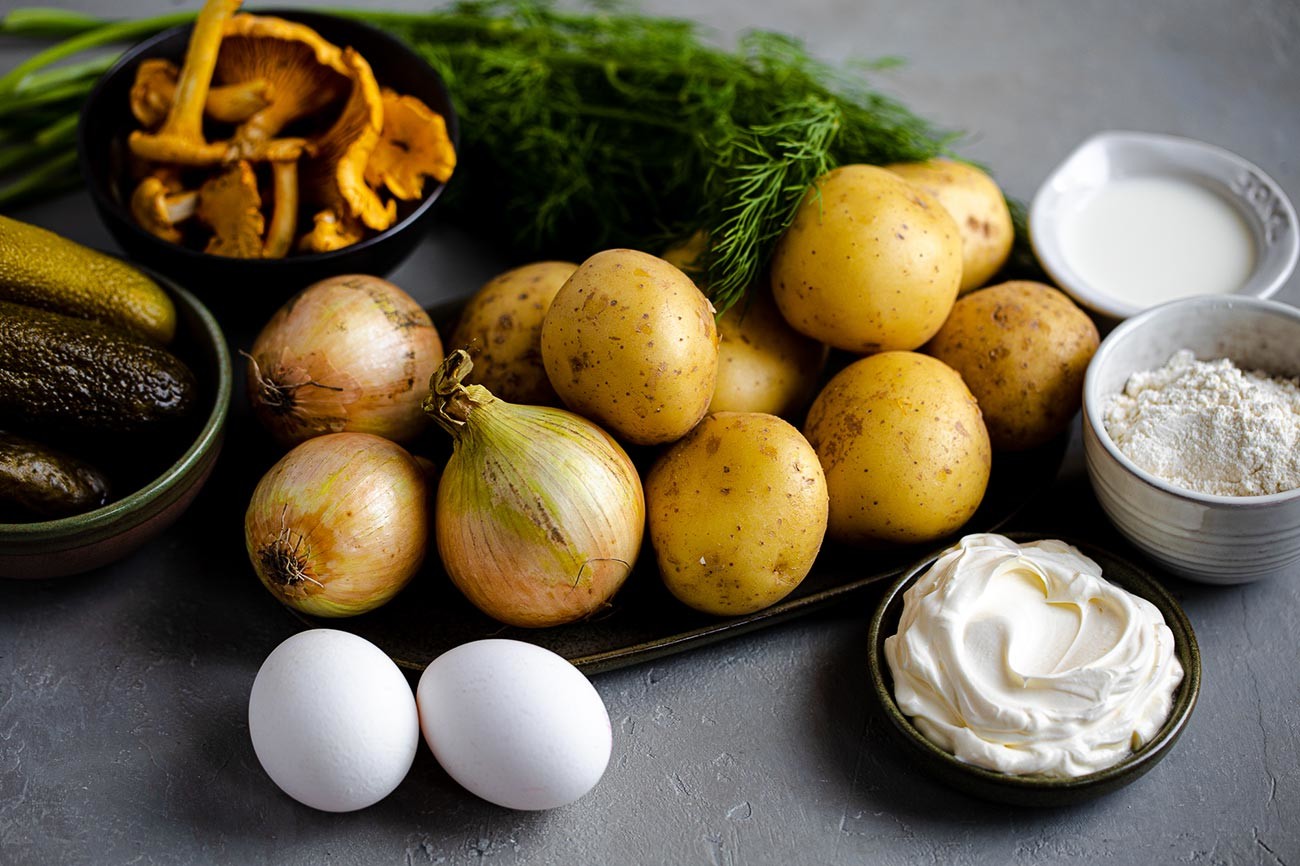 1. Peel potatoes and an onion; cut them into equal quarters. 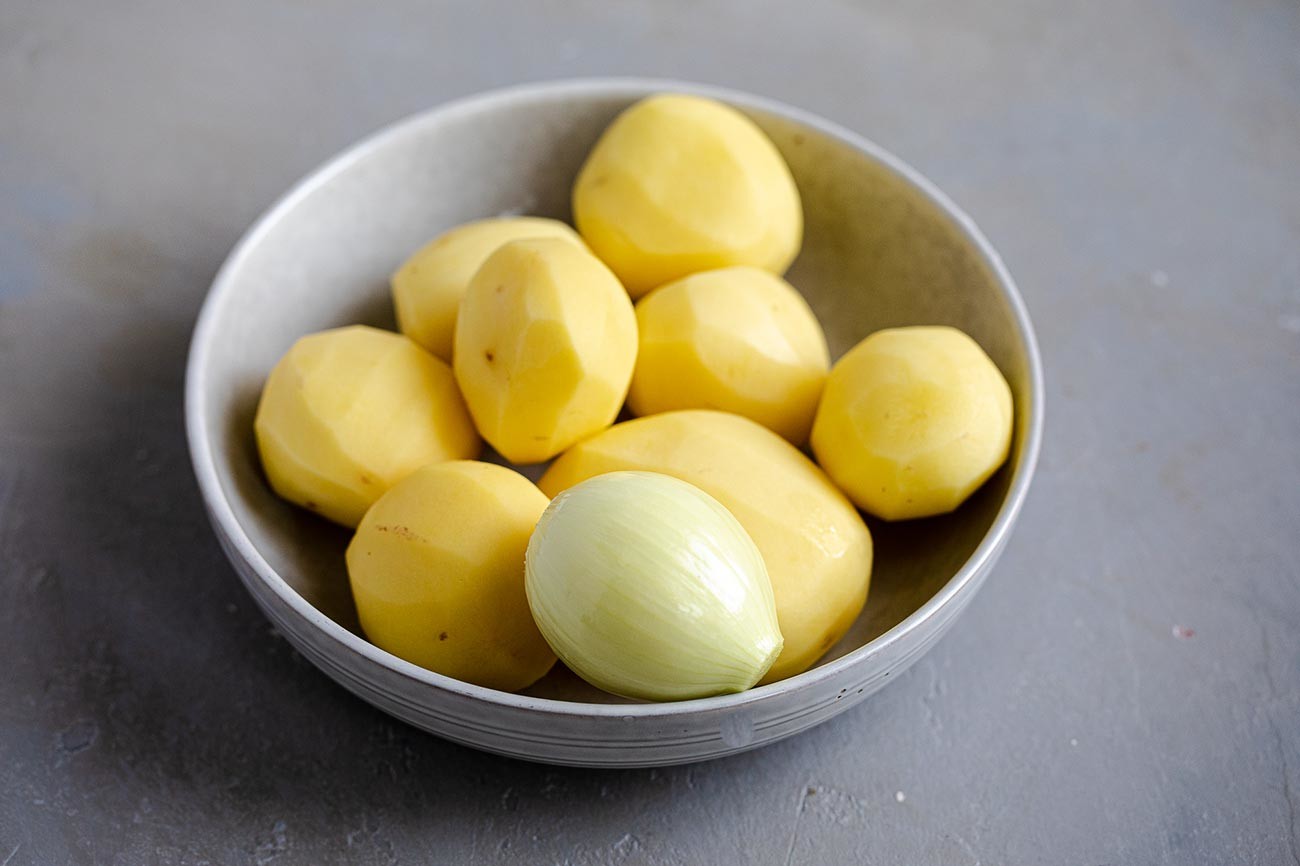 2. Boil potatoes and onion in salted water adding a bay leaf till soft, for about 20 minutes. 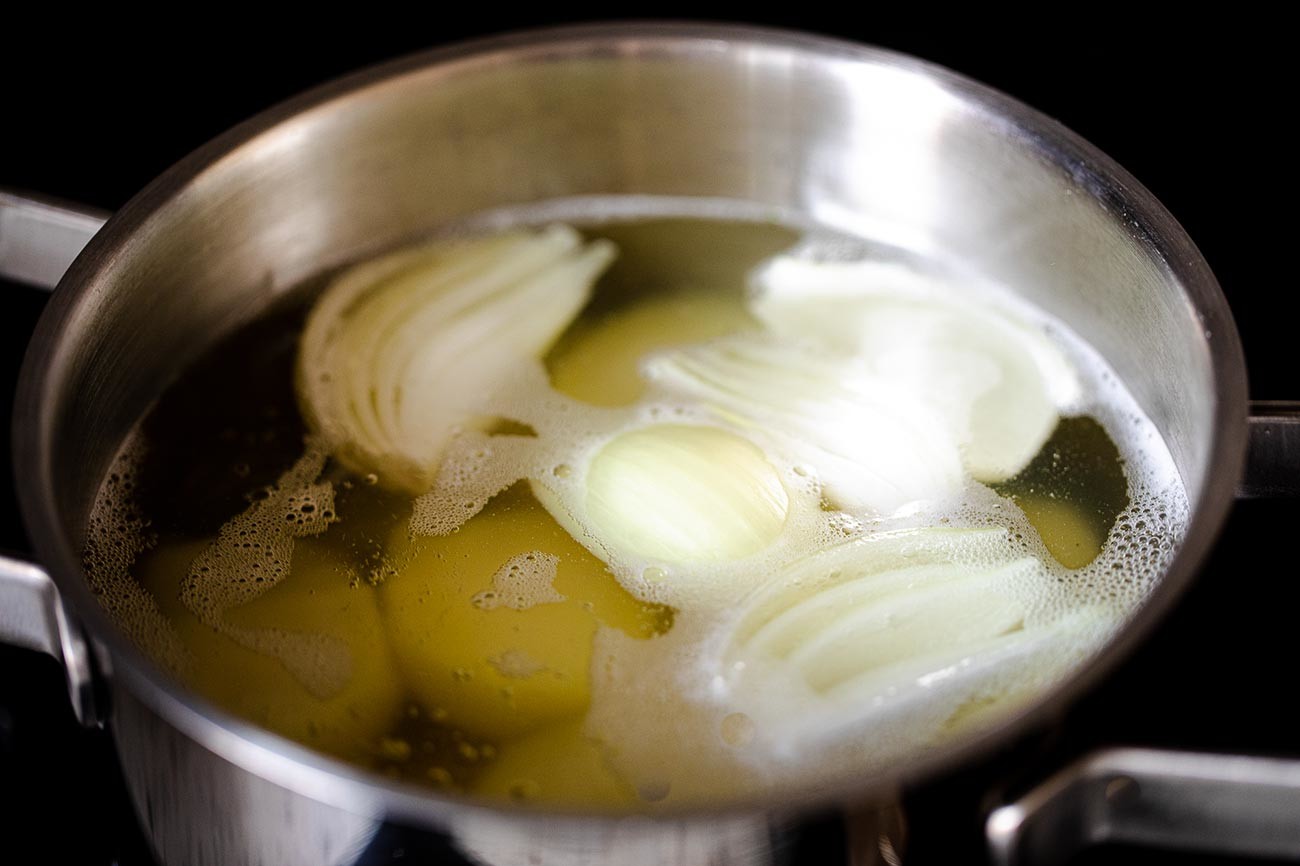 3. Drain the water, remove the bay leaf, mashed potatoes and onion until you have a smooth mass. 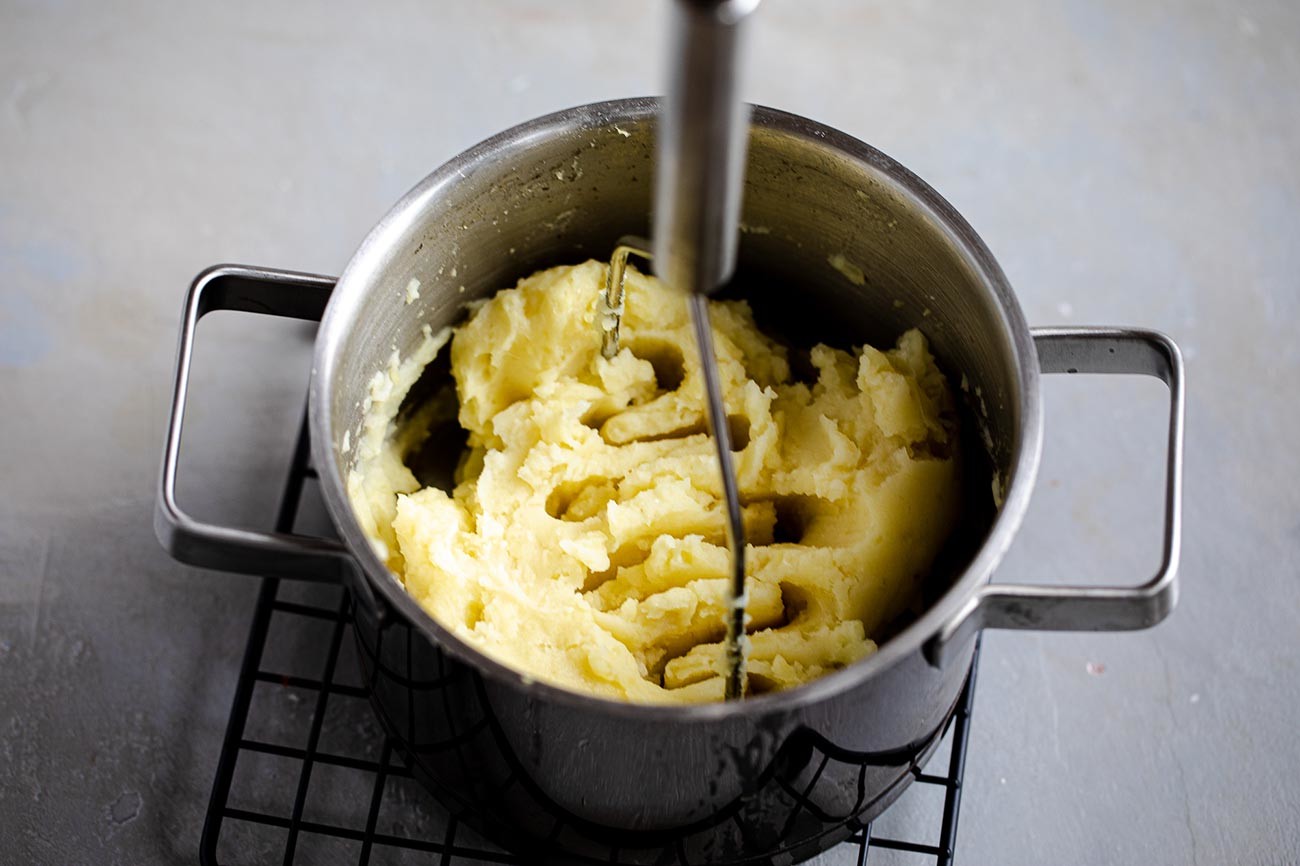 4. Add butter, hot milk and garlic powder to the potatoes and let the mixture cool. 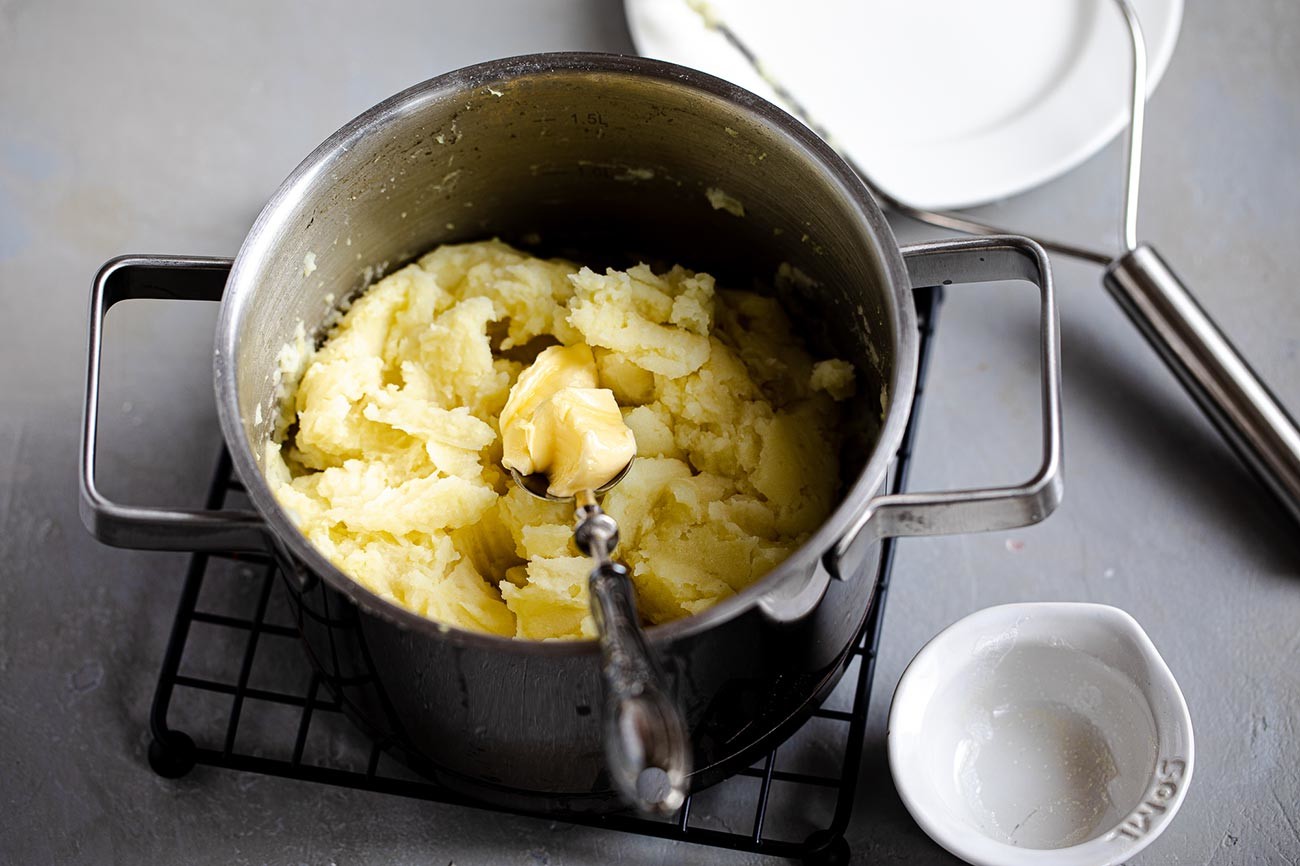 5. While potatoes are cooling, prepare the chanterelles. Chop white onion and fry in a mixture of butter and olive oil. Wash mushrooms thoroughly and dry with a towel. Add them to the softened and golden onion. Stew chanterelles for about 15 minutes. 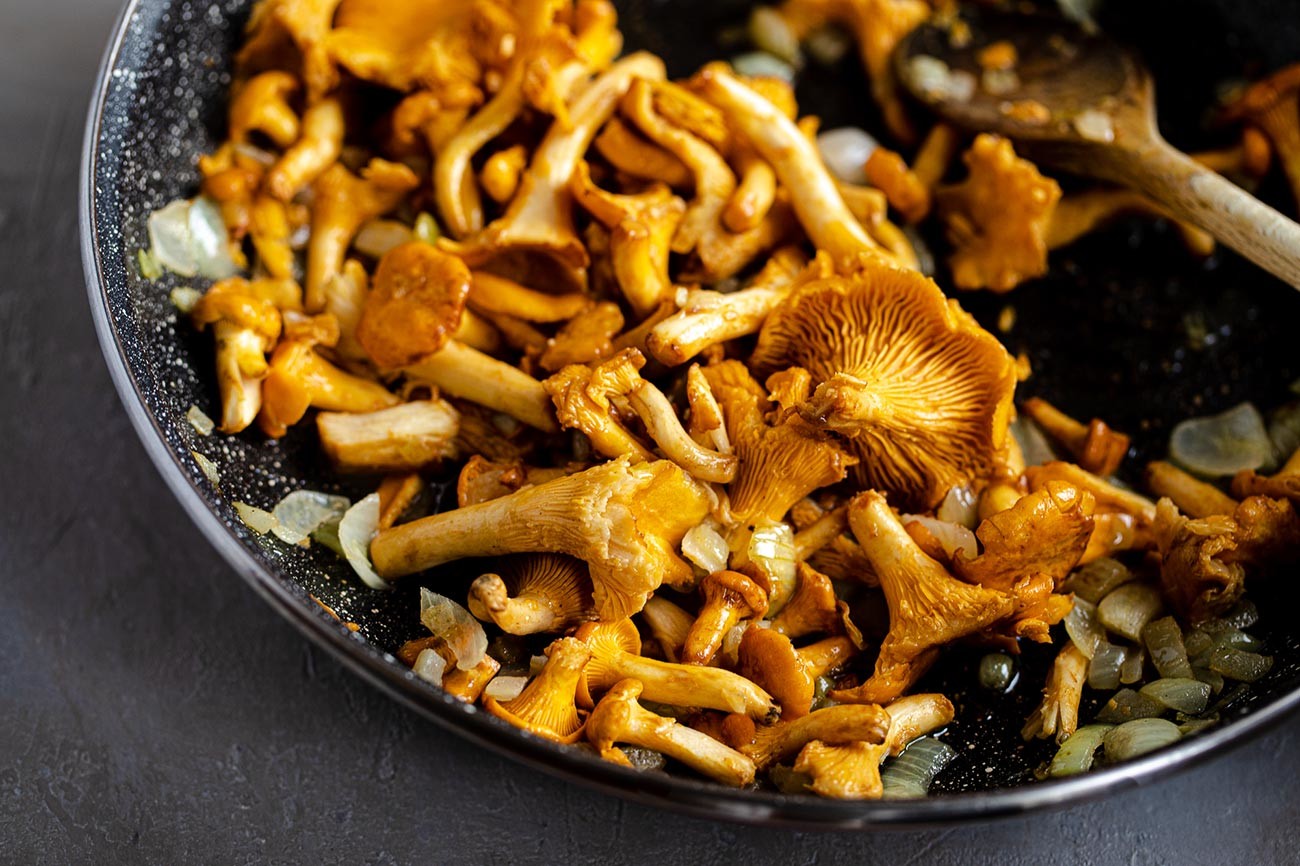 6. When the potato mixture is cooled, add flour and one egg. Stir everything to get a homogeneous mass. 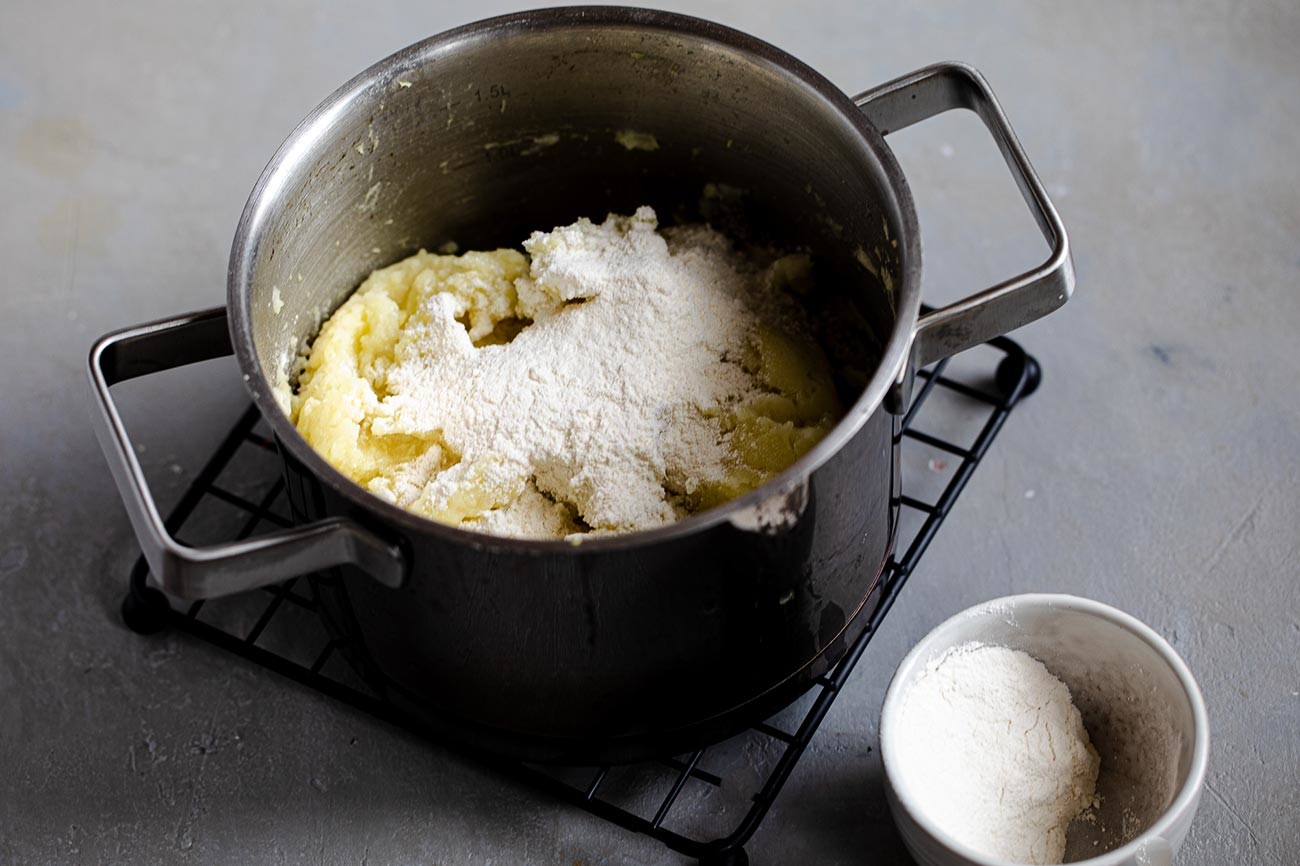 7. Place a potato mixture into a pastry bag and squeeze it forming round cakes on a baking paper. 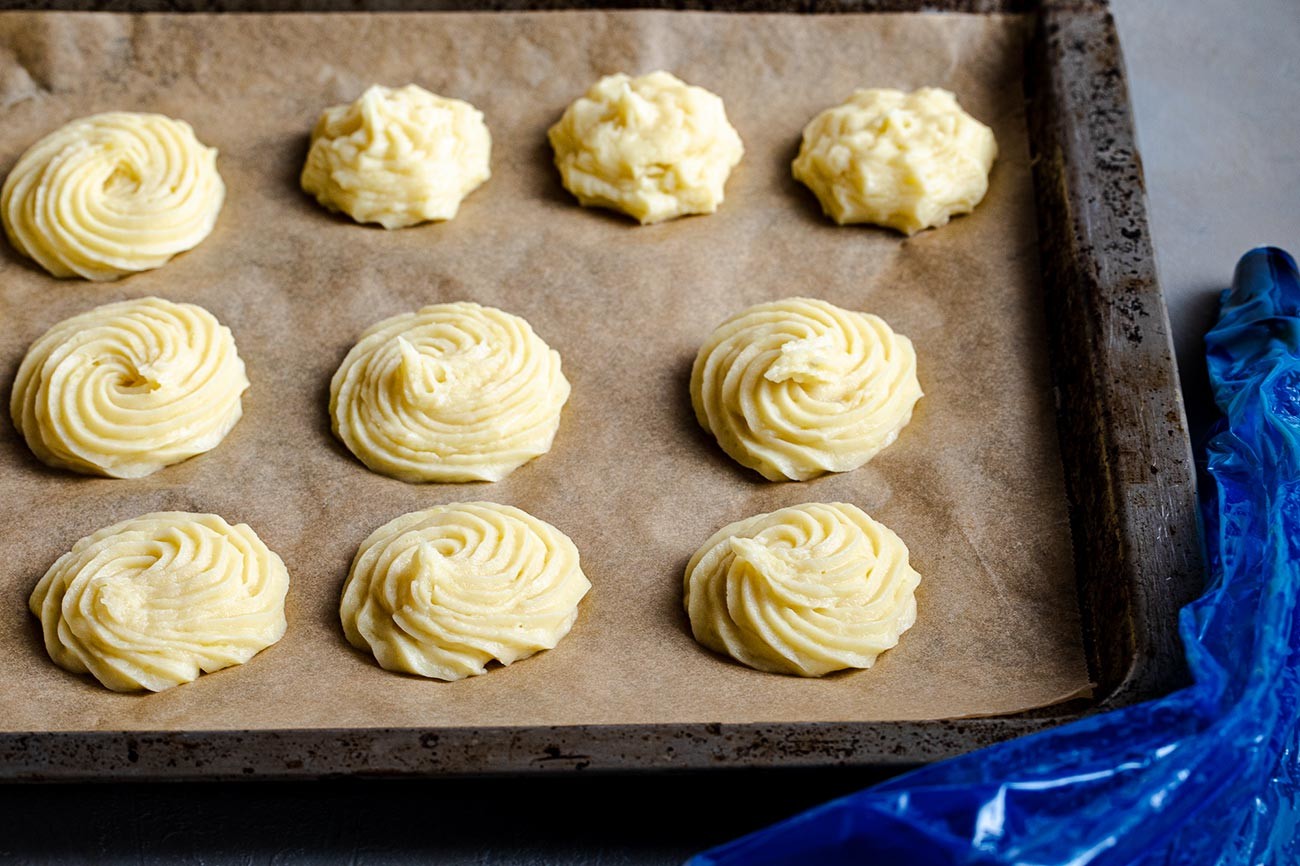 8. Repeat the same with crème fraiche, applying it on top of the potato cakes. 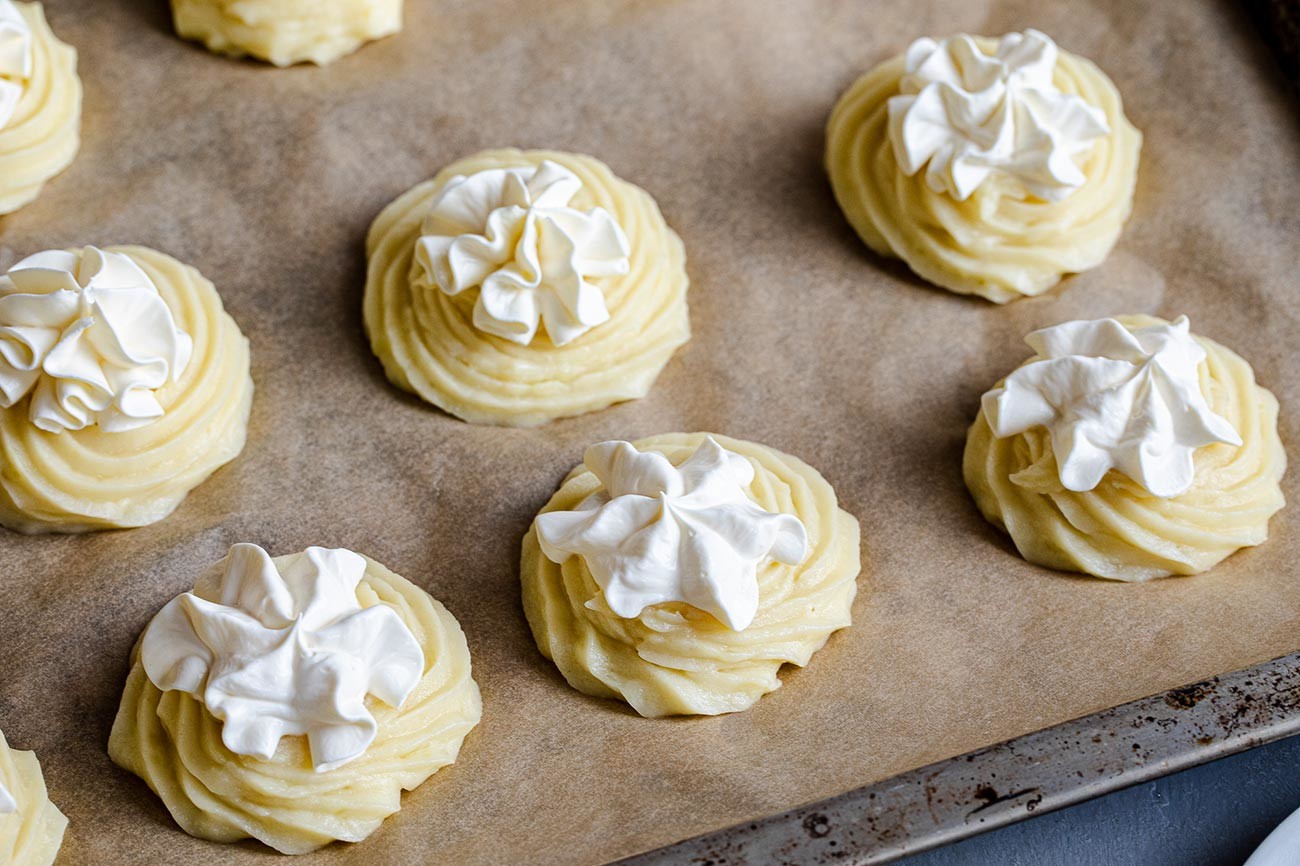 9. In order to give the kokorki a golden tint when baking I cover it with a mixture of one yolk and a teaspoon of milk. Work carefully with a soft brush not to ruin their shape. 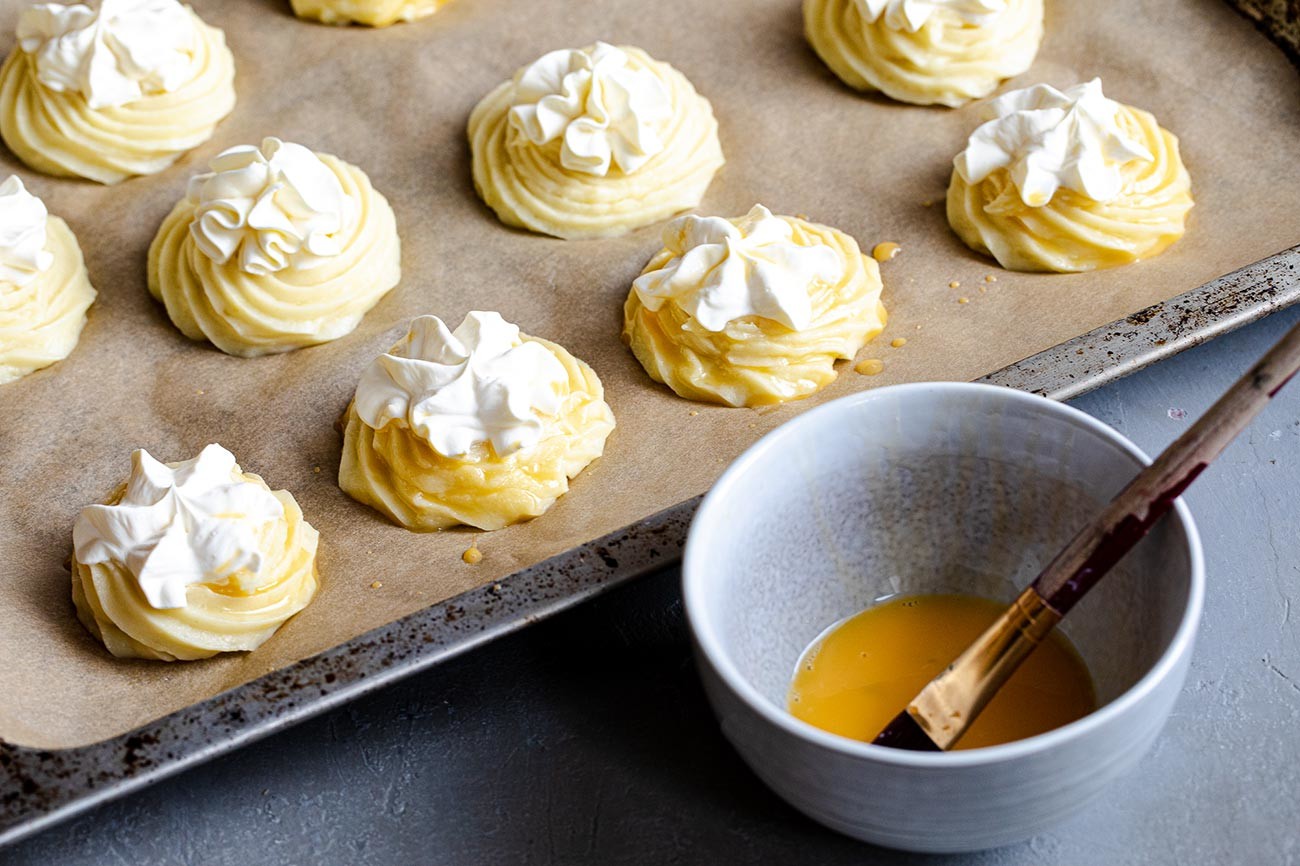 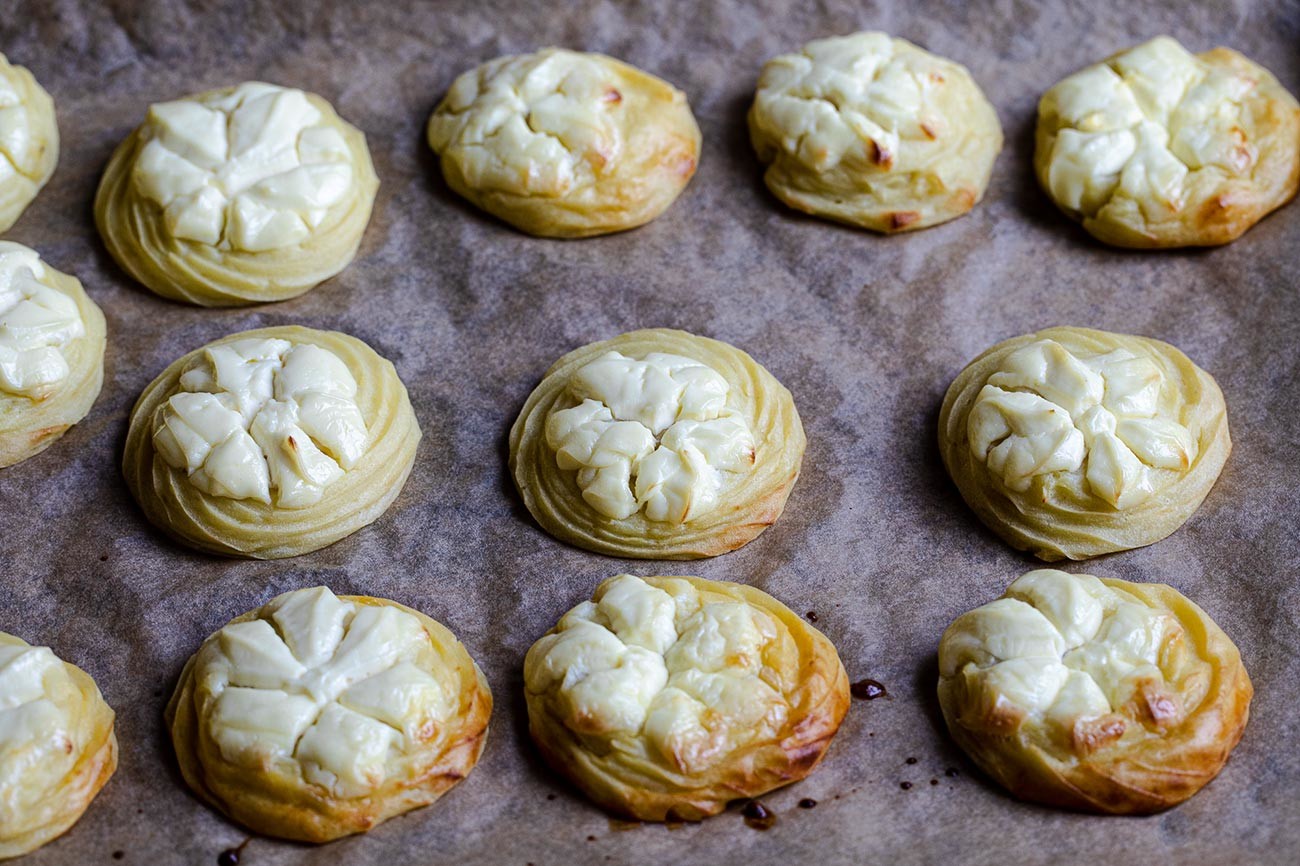 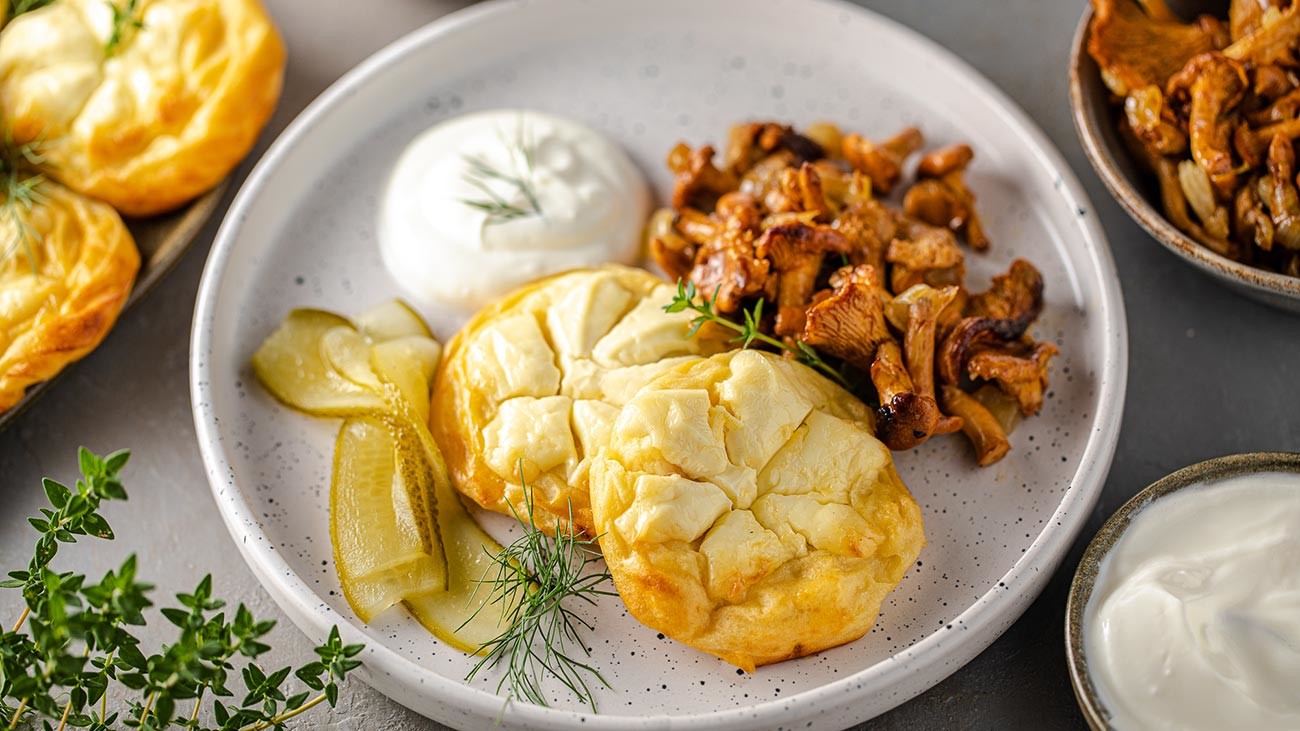