Monster in a jar: How the ‘tea mushroom’ became a Russian superfood (PHOTOS) 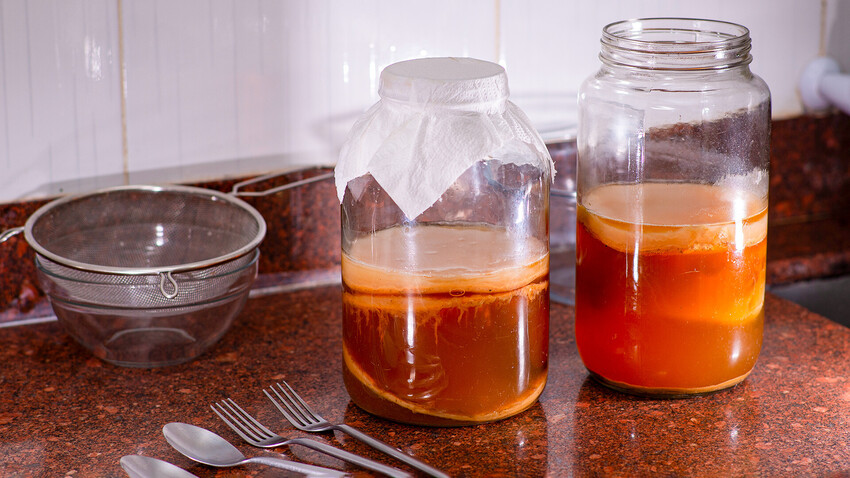 Helder Faria/Getty Images
The horrendous-looking drink resembles a jellyfish swimming in a jar, but, back in the day, it enjoyed such immense popularity across the USSR that people used to present it to friends and relatives. Some even gave their mushrooms names…

Practically every Soviet household would grow it at home and if you didn’t - you were still bound to see it at a friend’s place: The ugly, slimy thing could be seen floating in three-liter jars in rusty-colored liquid. It would grow to envelope the perimeter of the jar in just a week. And if you periodically “fed” it sugar, the thing could live for years! 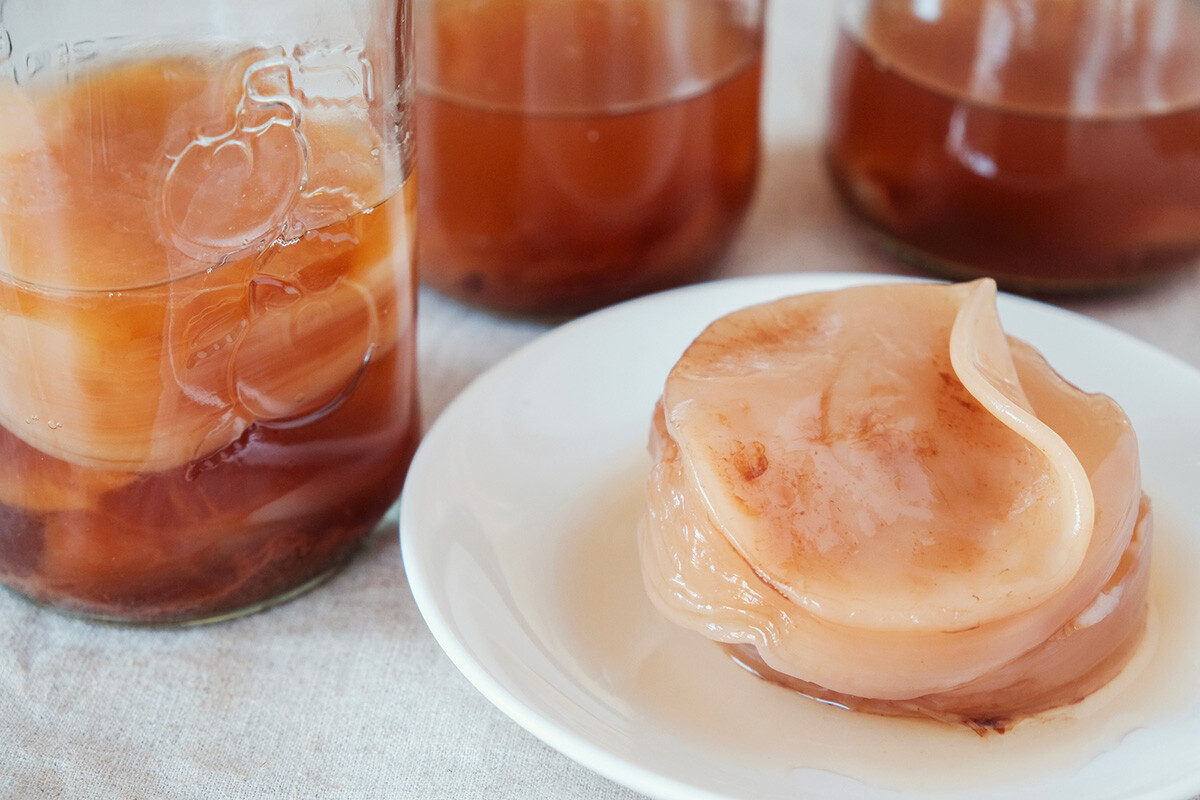 Meet the “tea mushroom”, commonly known as ‘kombucha’ or SCOBY (Symbiotic culture of bacteria and yeast) - the fermented drink made of sweet tea, yeast and acetic bacteria.

“It’s not that I can’t drink that mushroom - there’s no money in the world to even make me touch it. Here’s why. I’m five years old and I’m at my favorite grandma’s place. She’s in the kitchen, making something and, at one point, she takes the jar with that damned mushroom and begins to peel it (removing the top layers from the monstrosity). I’m hanging around close by. Now, my grandma is a huge prankster who loves games. So, what does she do to entertain the child? She takes one of the layers, puts it on her face and turns around to face me. She looked worse than Freddie Krueger! She begins to chase after me as a joke. I still remember how she tried to get me to come out of the closet that I locked myself in.”

This is just one of thousands of stories people online have told about the tea mushroom. Some adored it, others had one thought at the mere sight of one: “Kill it with fire!” 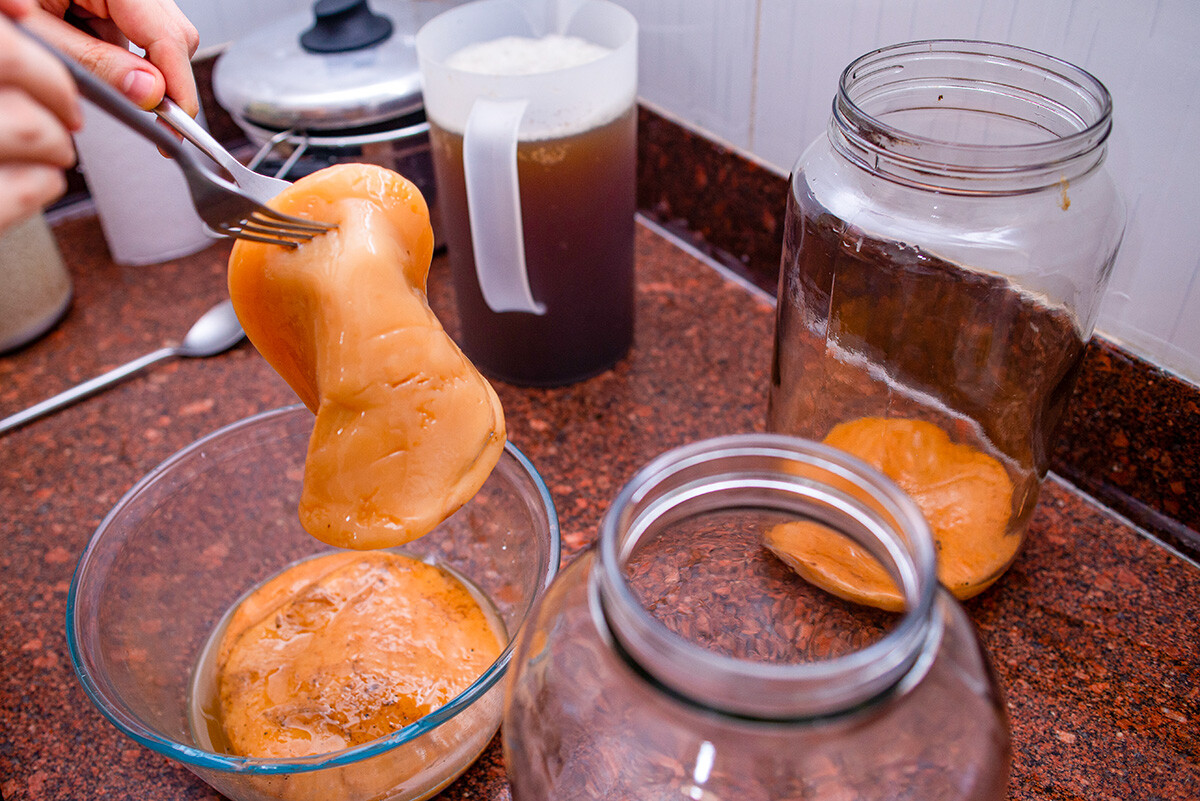 It’s thought that the tea mushroom first appeared in China two thousand years ago, before attaining popularity worldwide. It’s easy enough to grow one: you start off with sweetened tea, then add zooglea - a slimy bacterial mass that loves moisture and fluids. The caffeine and sugar content in the tea acts as a growth environment for the bacteria and yeast. The larger the colony, the “fatter” this body becomes. The receptacle is left to ferment for up to a week, during which time, the tea turns into something sweeter, more pungent (and sometimes alcoholic).

The mass is then extracted and the liquid poured into bottles. One tea mushroom can live for a very long time, provided that newly brewed tea is added once a week. 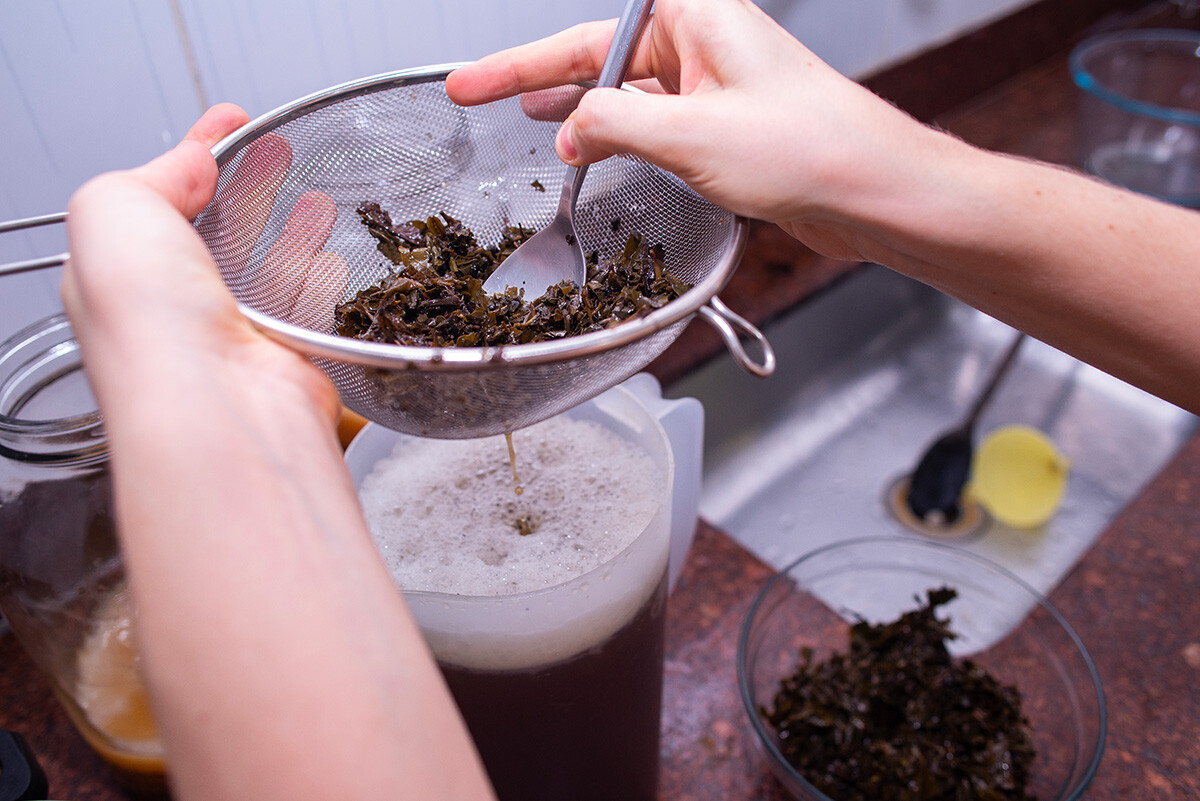 The simplest way to get a new tea mushroom is to either transfer the liquid into another bottle (with the colony consequently forming a new zooglea), or tear off a small piece and transfer it into another receptacle with sweetened tea. The mass would often move like a nomadic creature between friends and relatives - kind of like a house pet that required taking care of.

“This mushroom got into our home courtesy of my quirky aunt, with a note attached to it. Anyway, the thing was that we were supposed to name it. A list of suggested names was included. My aunt’s mushroom was a ‘Bobby’. Newly developed layers were to be distributed among neighbors together with the note,” user Prostoludinka remembers.

In Soviet times, the drink acquired a reputation for being a “superfood” - something that’s packed with health benefits. Among them are improved digestion, anti-hangover effects, improved immune system functioning, the ability to stave off diabetes, gout, fight neurosis, rheumatism, hemorrhoids, detox benefits, probiotics and even cancer-fighting properties.

In reality, almost none of these benefits have been backed by scientific evidence. It’s true that research did occur and the data was optimistic, but it’s also important to consider that the majority of the results were acquired in vitro - meaning the tests were carried out on cell cultures, or, at most, with rats used as guinea pigs. 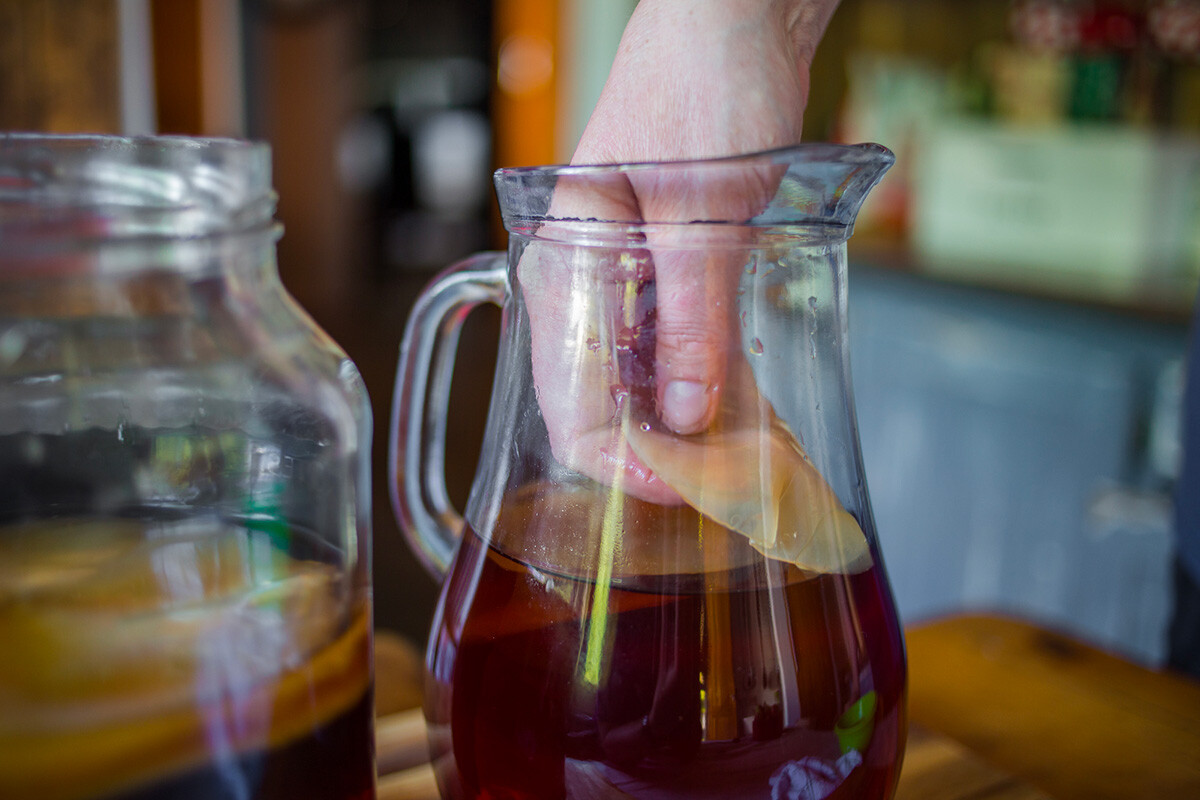 For instance, the rat experiments revealed that regular kombucha consumption reduces toxicity in the liver, resulting from chemicals, sometimes up to 70 percent. Some research confirmed antimicrobial and antioxidant properties, and even anti-cancer ones - but only when tested on cell cultures. Diabetes-ridden rats, meanwhile, experienced slowed down carbohydrate metabolism, which lowers blood sugar. As for the cancer-fighting properties, lab testing indeed showed that the tea mushroom helped stem the growth and spread of cancer cells, thanks to a high polyphenol concentration and antioxidants that, according to scientists, block gene mutation.

Science, however, still has no idea if even half of these benefits apply to the human organism. That being said, we do know of situations in which kombucha can be harmful.

Mushroom that can kill?

In 1995, two women in the state of Iowa fell severely ill after consuming home-brewed kombucha on a daily basis for two months. One of them died. There is no direct evidence that the tea mushroom was the culprit; however, it could’ve played a key role, according to the state’s Department of Health (IDPH). 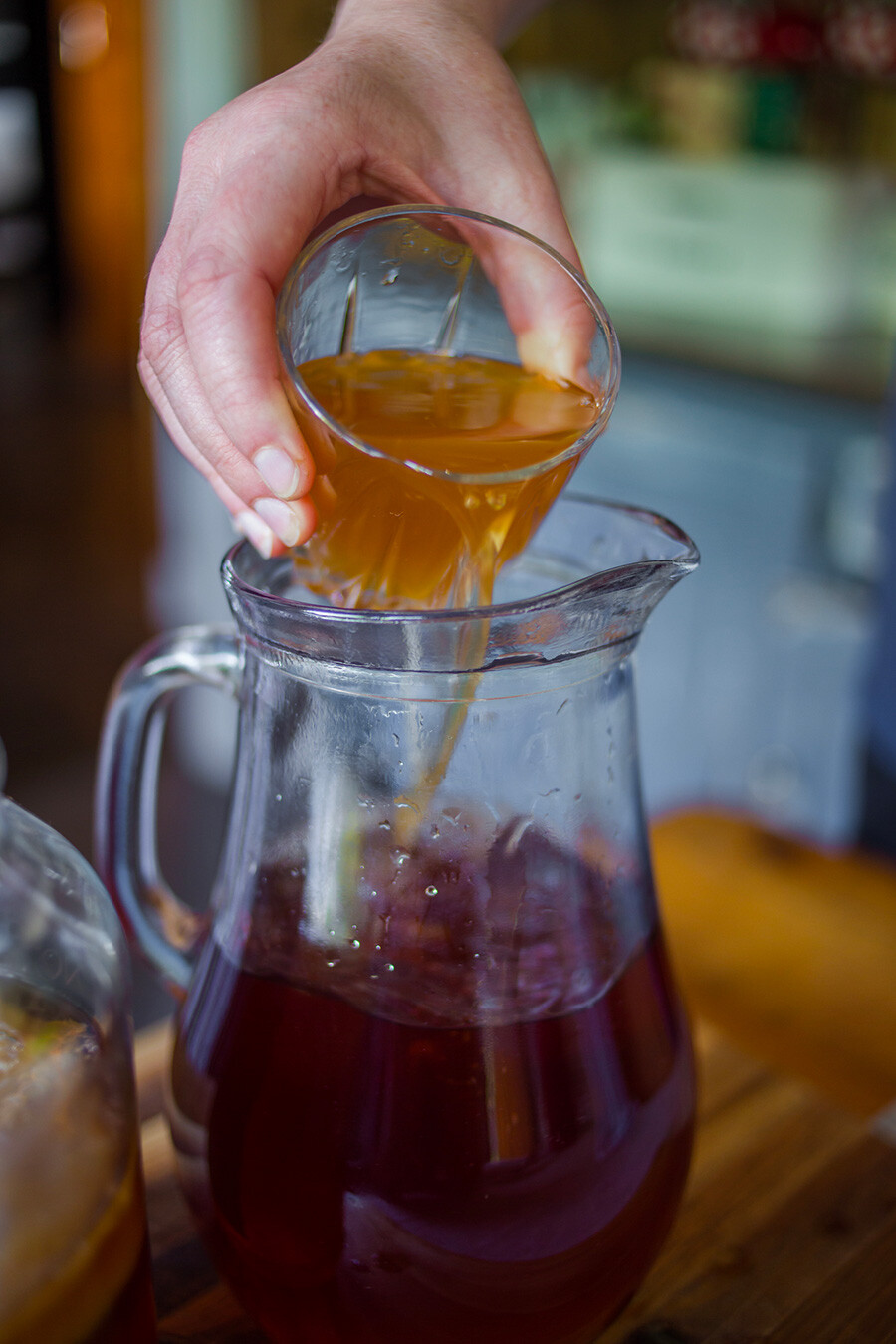 The mushroom does come with precautions: it must not be consumed by anyone with kidney or lung conditions, as you run the risk of acidosis - a surplus of acid in the blood, brought on by the mushroom. Moreover, the drink’s microbiome may lead to infection among people with compromised immune systems. Russian Union of Nutritionists member Aleksandra Razarenova says: “I would recommend taking special care when drinking the tea mushroom if you’re someone with heightened stomach acidity or suffering from any gastro-intestinal conditions; I would also include pregnant and feeding women.”

Not all is lost, however. The Soviet tea mushroom cult doesn’t owe its existence solely to myth and unsubstantiated hypotheses: first of all, it really is a healthy alternative to sugary carbonated drinks and juices.

Despite the fact that the tea mushroom feeds on sugar, its final content in the drink is extremely low. A glass on average contains only 30 calories and 2-8 grams of sugar. Moreover, the concoction contains B-class vitamins and - as any fermented beverage - rich in milk bacteria. 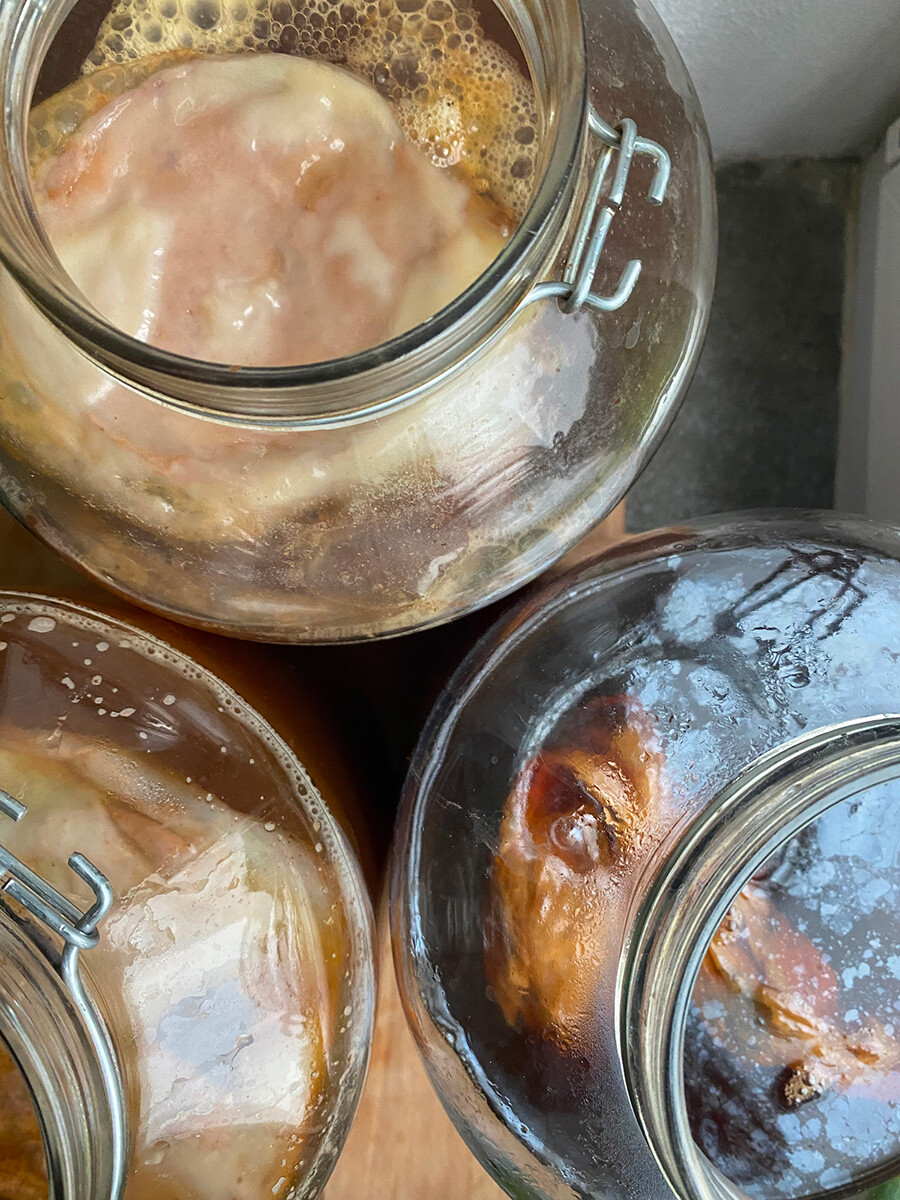 However, the mushroom’s reputation was stained by the market economy of the 1990s, amid a widespread transition to carbonated drinks. For a time, the tea mushroom became a Soviet anachronism, while its renewed lease on life in Russia was provoked only later by a boom in the popularity of kombucha (as it is more commonly known in the West) across the globe, where it enjoys popularity as a wellness drink.

The drink once again rose to prominence in 2016, amounting to $1.6 billion in sales worldwide. In 2022, the figure is projected to grow to $2.5 billion. The substance takes on many forms, as well as being dried, crushed up and put in capsules.

These days, the mushroom drink isn’t super-popular in Russia (at least not as popular as it was during the USSR), but it’s slowly gathering pace again. There’s an increasing number of websites with instructions for preparation (they sell so-called kombucha boxes) and even a fan club. One can also find zooglea itself on store shelves of popular chains, complete with instructions as well. Meanwhile, people online are actively sharing their experiences and expertise - particularly on things that can kill the mushroom: “Caution: under no circumstance should you throw the mushroom in hot water, it’ll die immediately.” Or: “The tea must be very well filtered. If the SCOBY makes contact with tiny tea leaf particles, the spot might develop something akin to necrosis.”