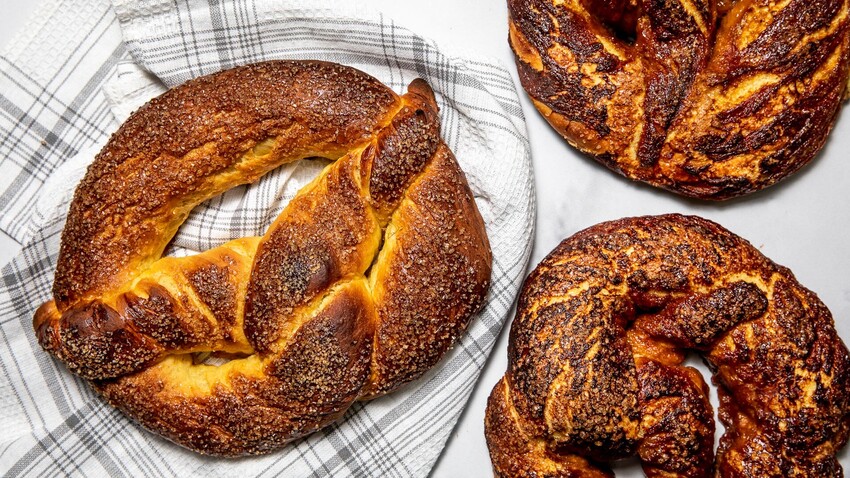 Over 500 years ago, the border area between Russia and Europe gave rise to the legendary sweet “krendel”.

Yulia Mulino
Without a time machine, we’re hardly in a position to know the fully genuine recipe for Vyborg ‘krendels’, which dates to the 15th century, but let’s prepare an approximate version of this medieval treat.

Vyborg is called “pretzel town” or “krendelny town”, because the locally-made krendel is one of the main tourist attractions of the city, which is situated 68 km from the border with Finland. It is believed that krendel was first baked by the Order of Franciscans, who came to Vyborg in the 15th century. The monastic fraternity brought spices to the northern lands that were not familiar to the locals. That made Vyborg krendels so peculiar and different from their German counterparts. The sweet, spiced krendels were baked on feast days after Lent and were considered a delicacy for the nobility. After Vyborg became part of Russia in 1721, such krendels were supplied to the Imperial court.

From what we know, the real Vyborg krendel is a sweet pastry, made with many spices such as cardamom, nutmeg, cloves, marjoram and others. An important technique is to first boil the krendels in water and only then bake them. They should be baked on straw, which gives the pastry a unique smoky flavor. I make mine on baking paper. I recommend visiting Vyborg and trying the original krendel in any cafe. Or you can cook them at home.

When making Vyborg krendels myself, I used a recipe from Maslov's 1905 book, The Bakery Man, (Bulochnik). While it doesn't state the clear amount of flour and milk that’s needed,  the main ingredients and spices are quite clear.

I baked my krendels using various techniques: with and without scalding in boiling water. The krendel without boiling water is easier to make and it holds shape better, but it is not as spectacular and fluffy.

I'm sure these juicy, flavorful krendels with sweet crust and airy inside would be appreciated by the brothers of the Order of St. Francis, if they were alive today. 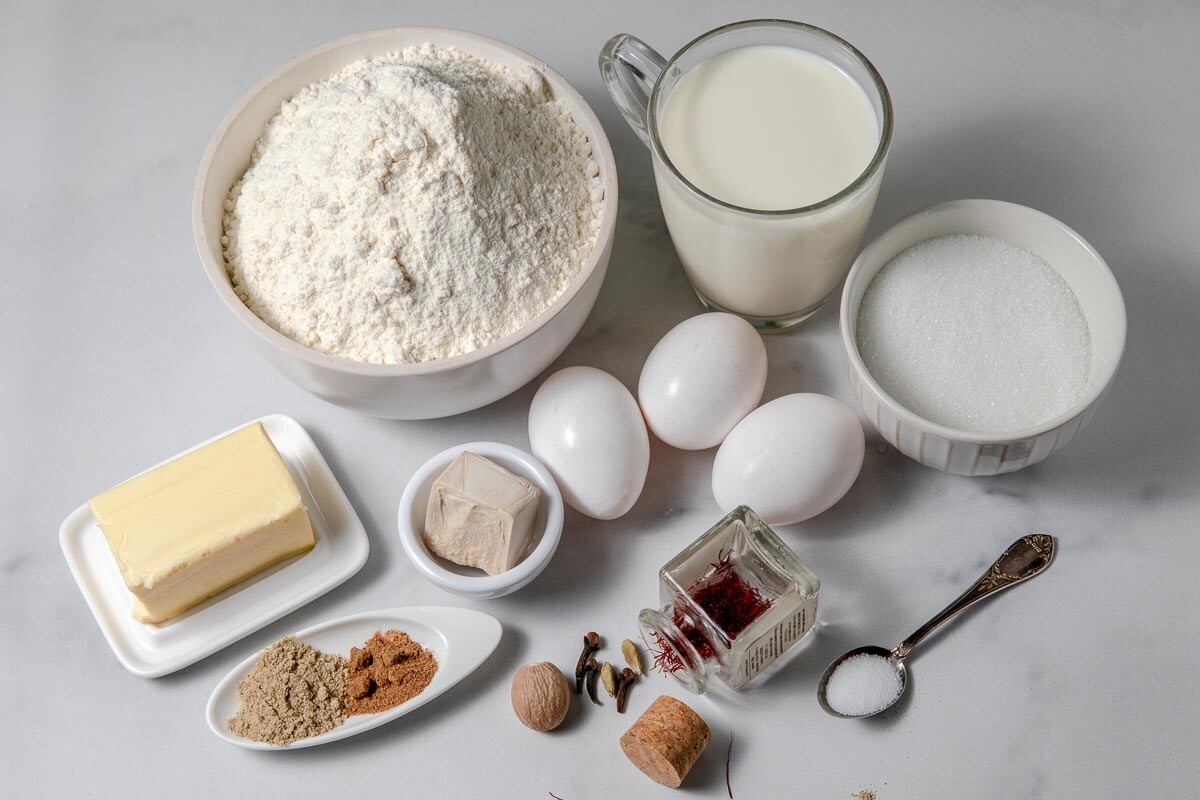 1. Pour half a glass of warm milk and dilute the yeast, and add a tablespoon of sugar in it. The yeast should be activated. 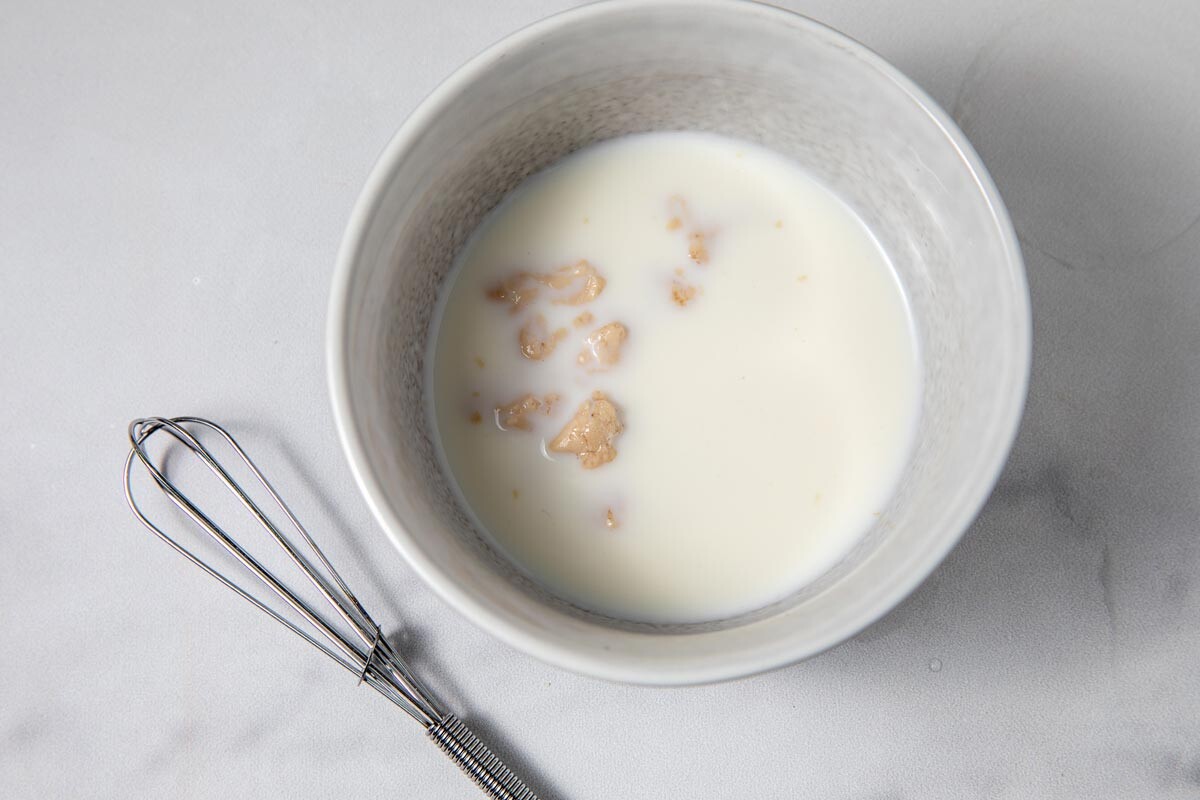 2. Dissolve the saffron in the milk. It will give a special flavor and yellow color to the dough. If you are not a fan of saffron, then omit this step. 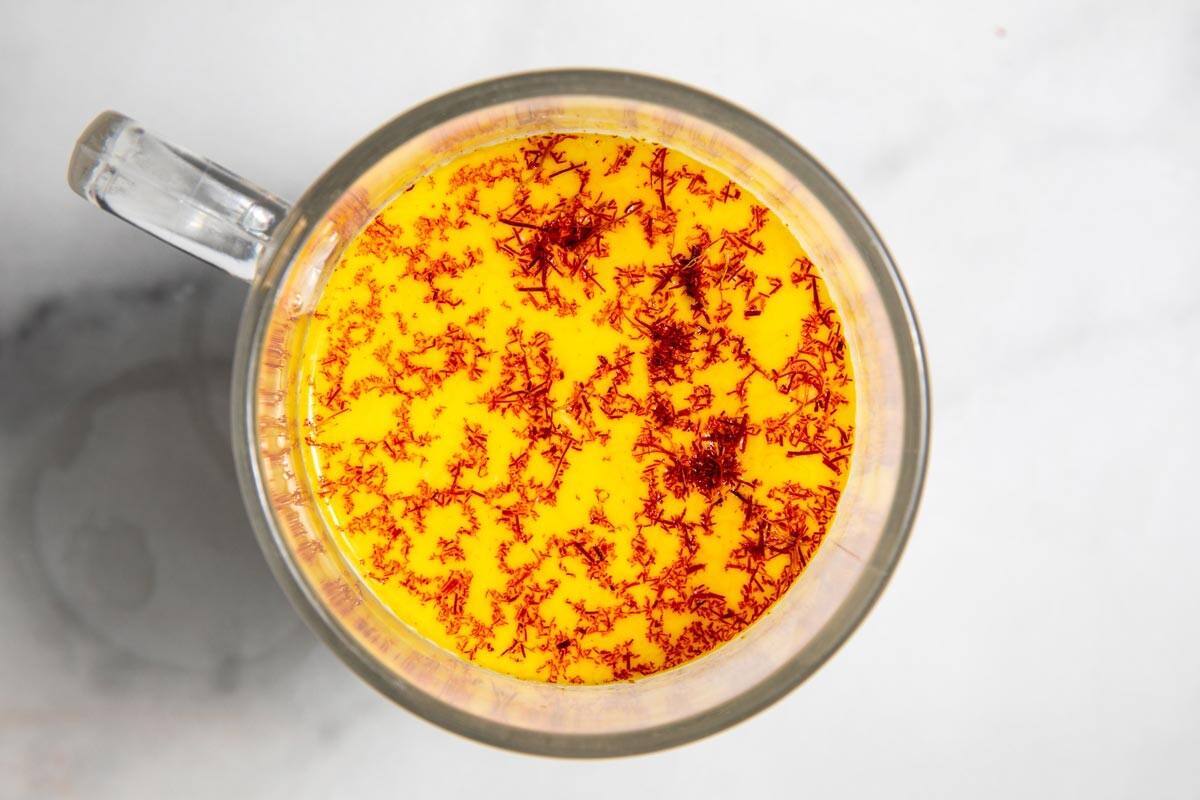 3. Whisk the eggs and sugar. Add milk to the eggs. 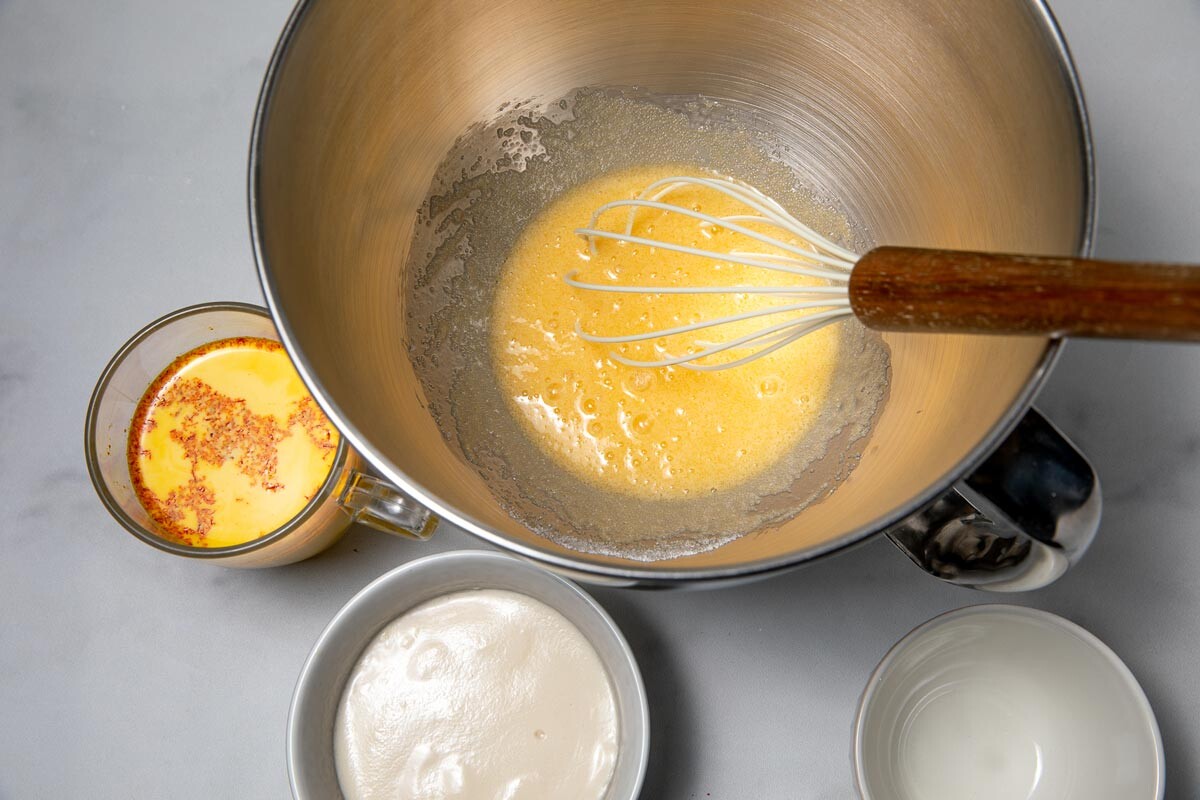 4. Sift half of the flour into the milk mixture and pour the yeast mixture in as well. 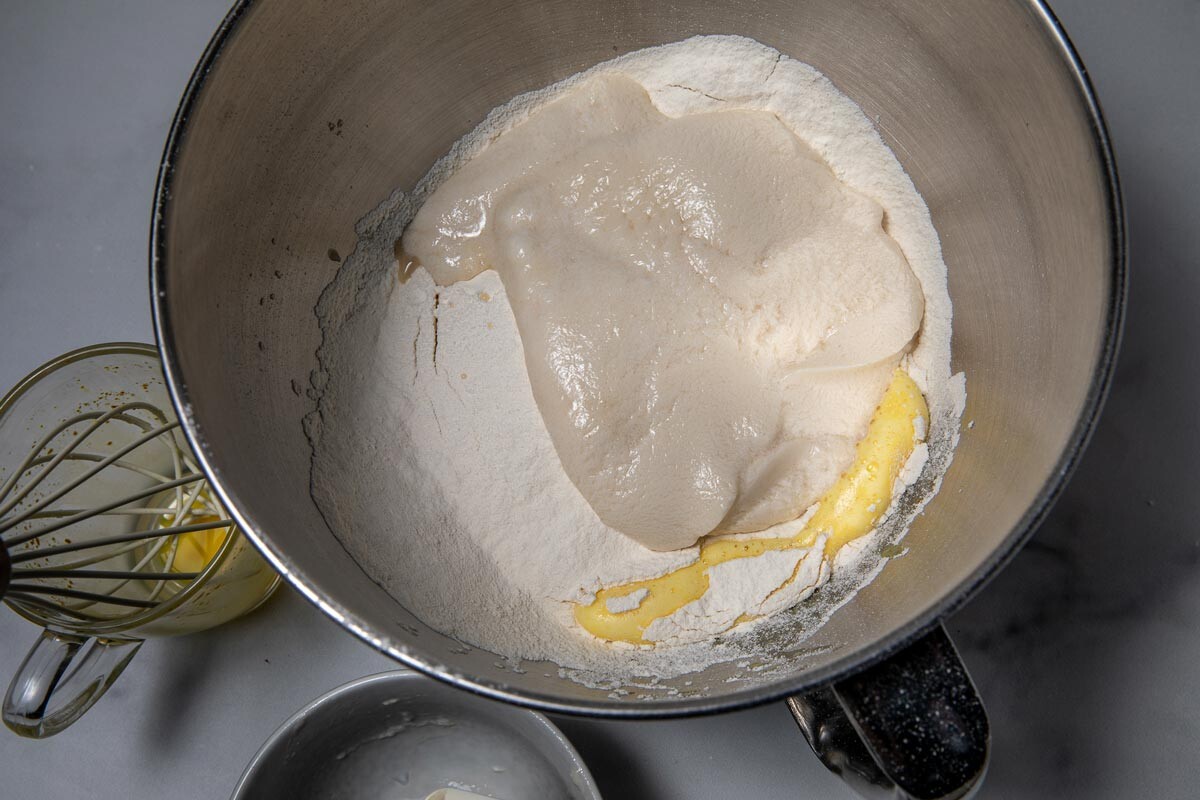 5. Stir in the liquid dough, cover with a towel and let it rise for 30 minutes. 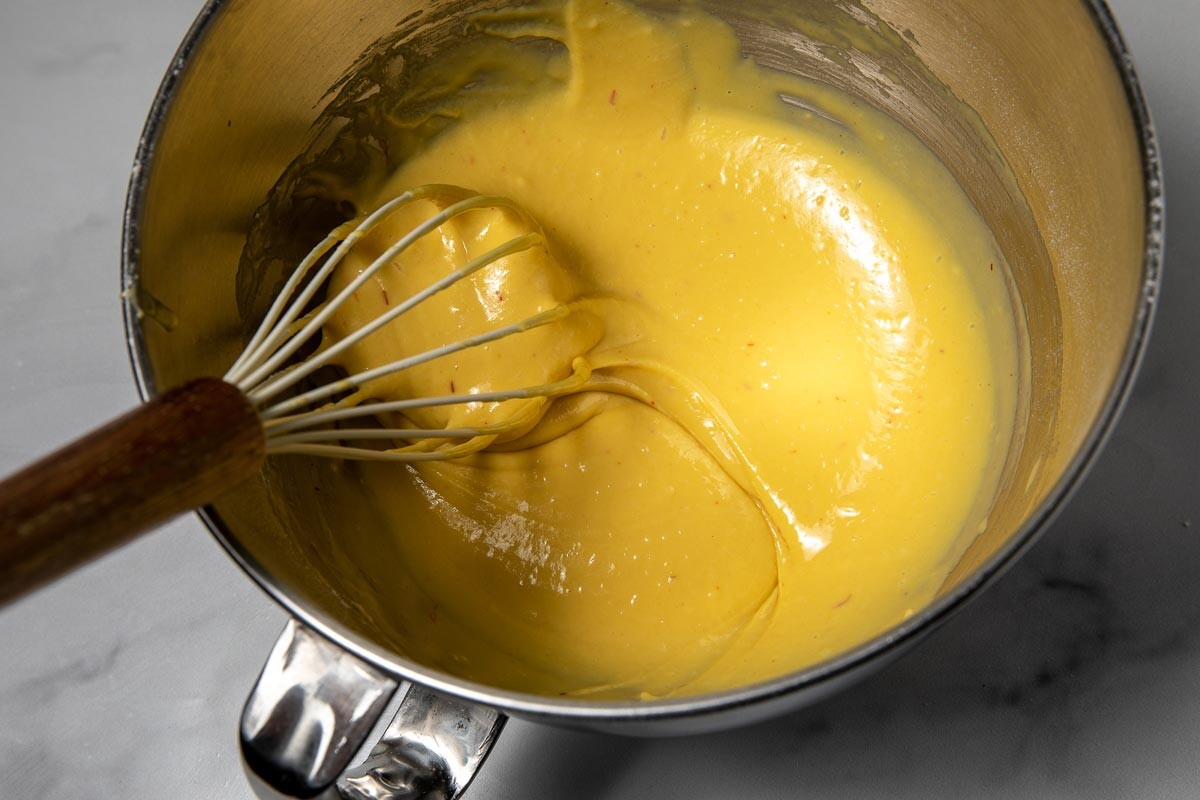 6. Drain the dough and incorporate the remaining flour. 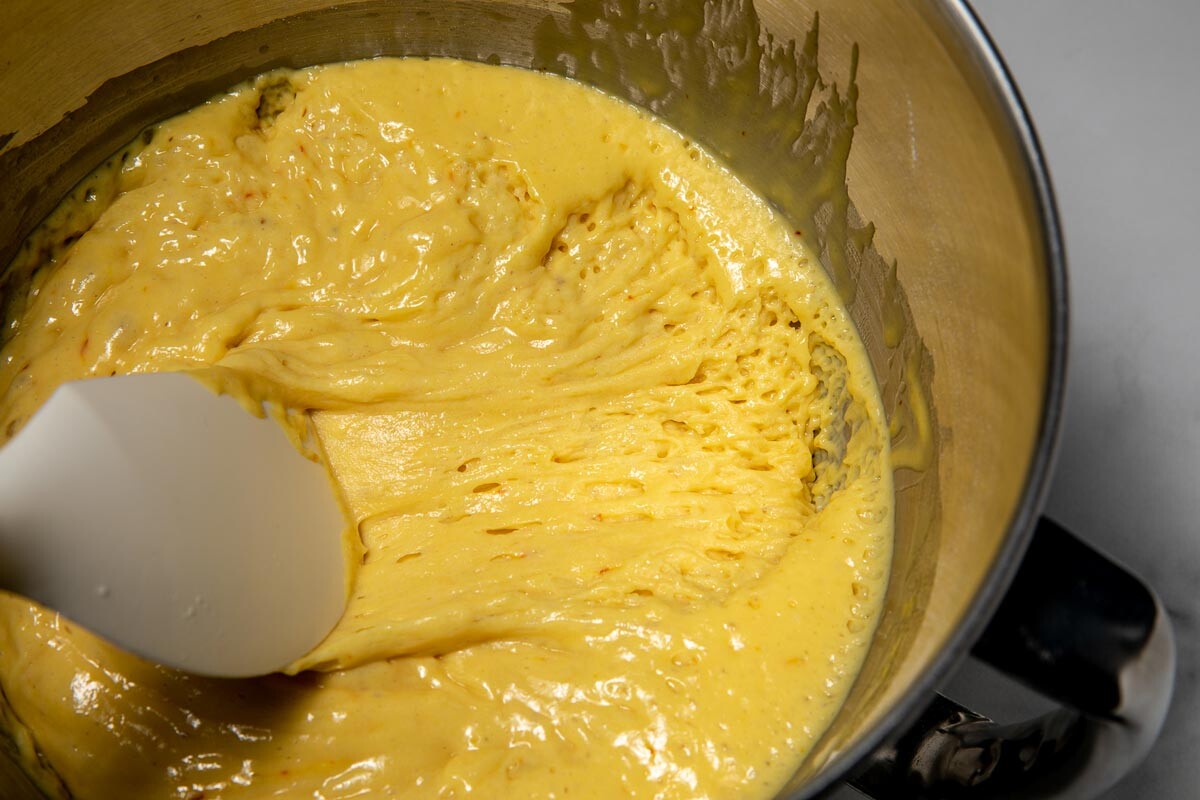 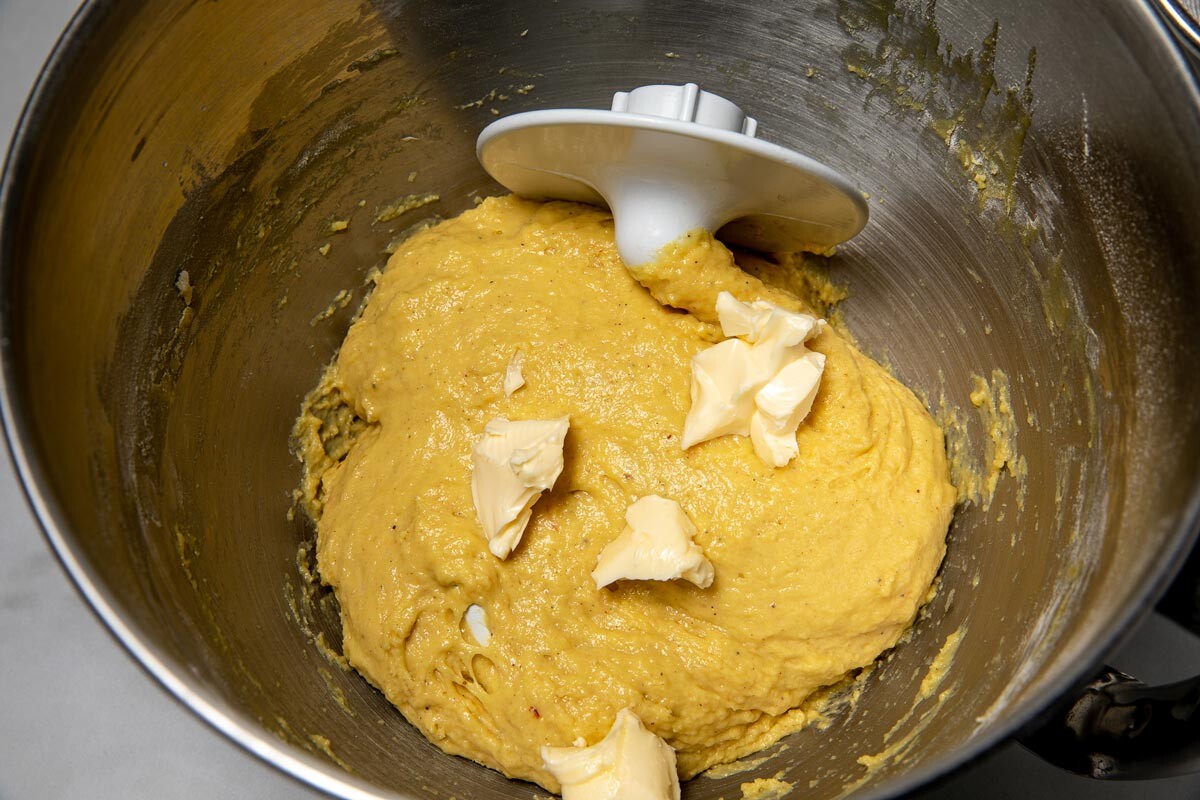 8. Knead the dough for 15 minutes in the mixer until it no longer sticks to the sides. The dough should be smooth. 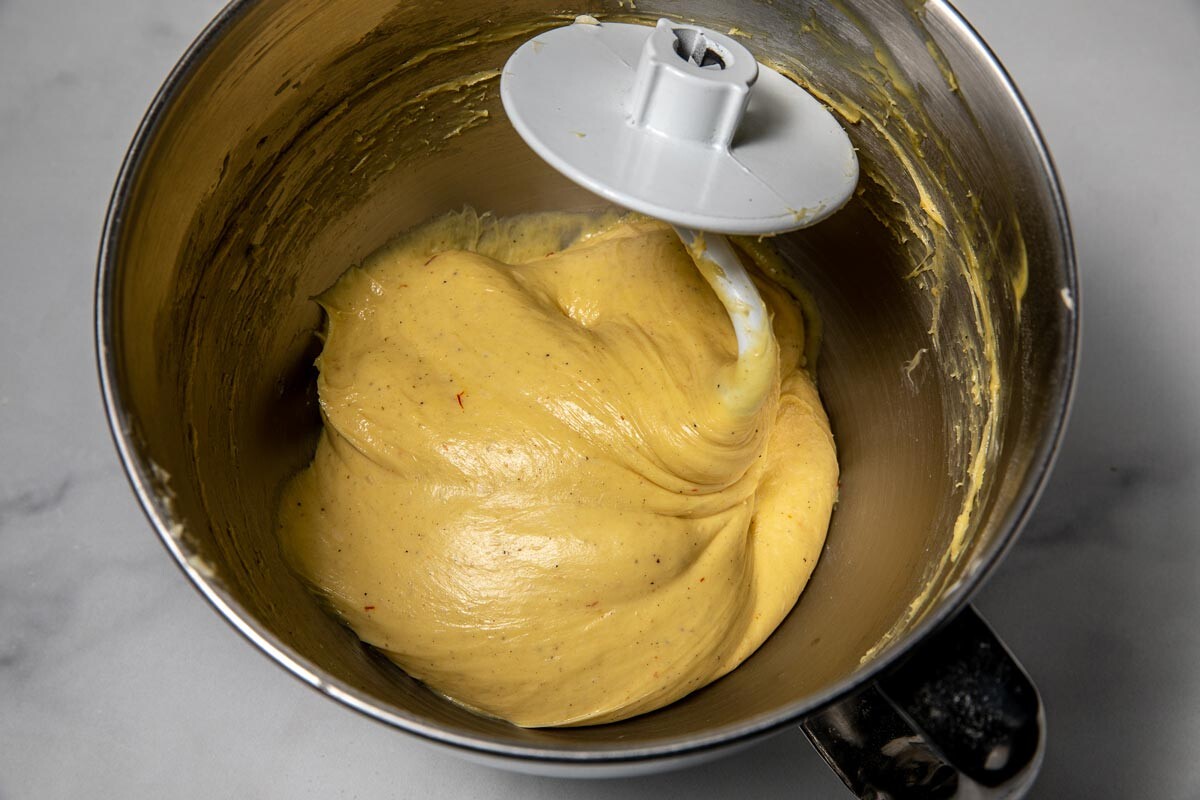 9. Cover the dough with a towel and put it in a warm place for 1 hour. The dough will rise again. 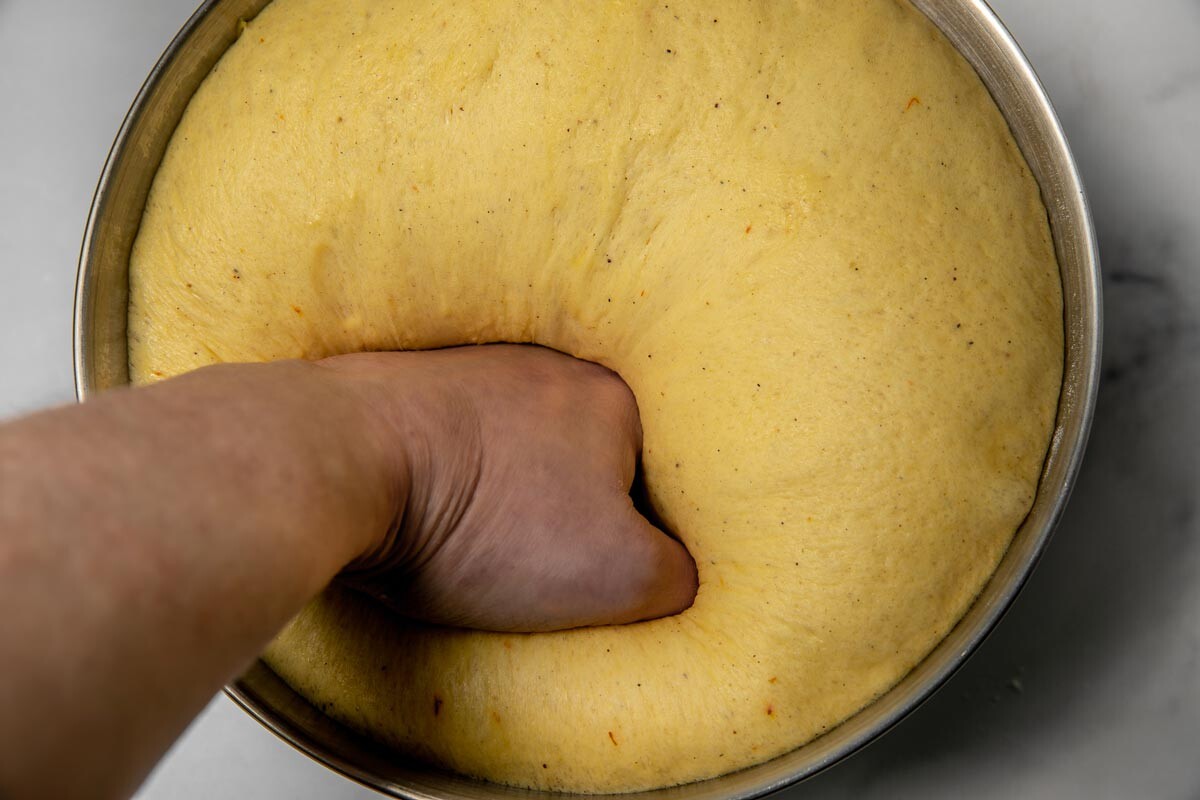 10. Divide the dough into 3 portions in order to make three large krendels. Make three rolls and form the krendels. 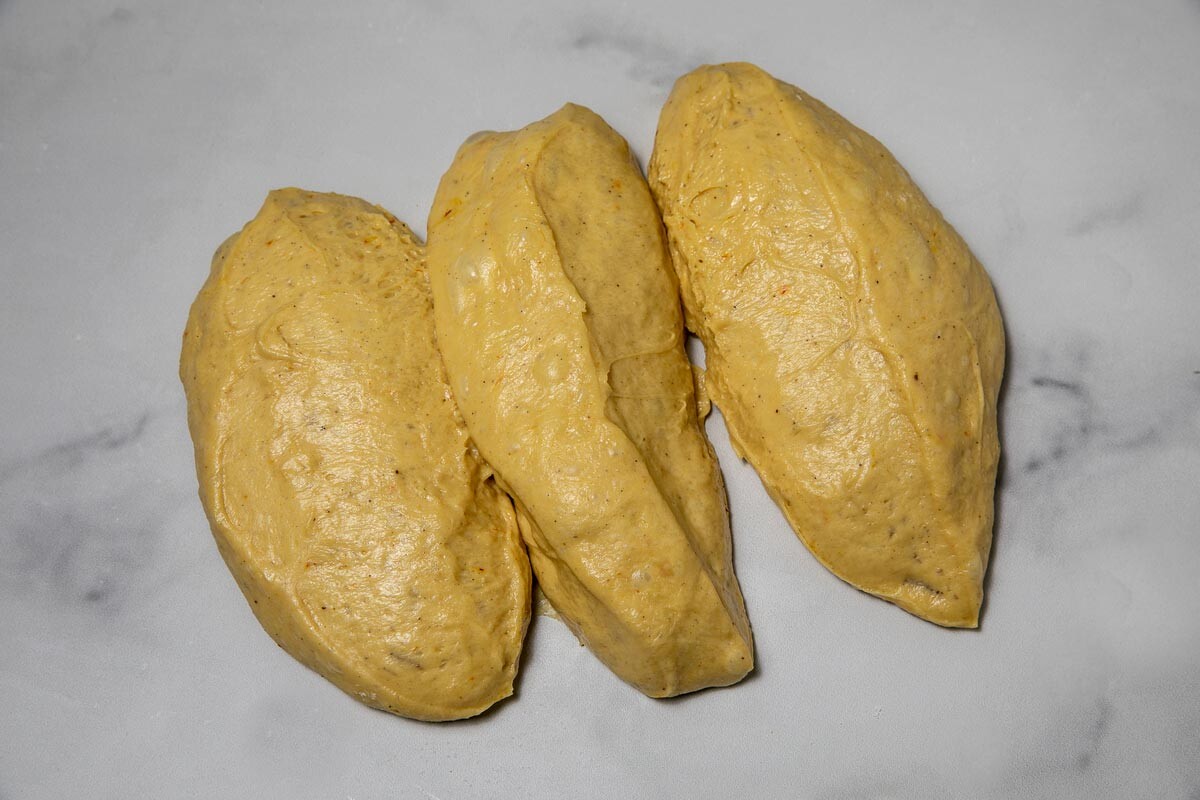 11. If you want to cook them in the traditional manner, then prepare a large pot of boiling water  and heat the oven to 220° C. Dip the krendel gently into the boiling water for one minute. Use a wide skimmer to keep it from falling apart. If you want a brown crust, dissolve a couple of tablespoons of baking soda in boiling water. 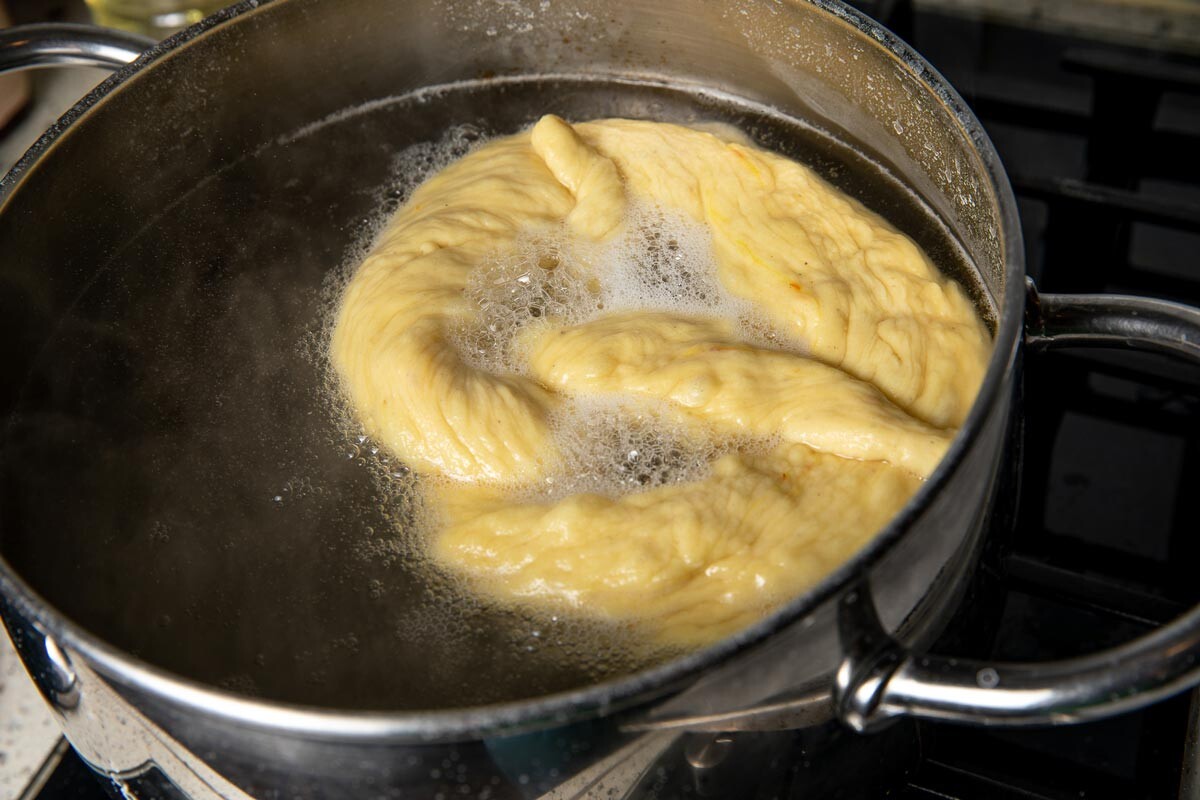 12. Place the krendel on baking paper, cover with the egg yolk and a spoonful of milk mixture, and sprinkle with brown sugar. Place it in the oven for 15 minutes. 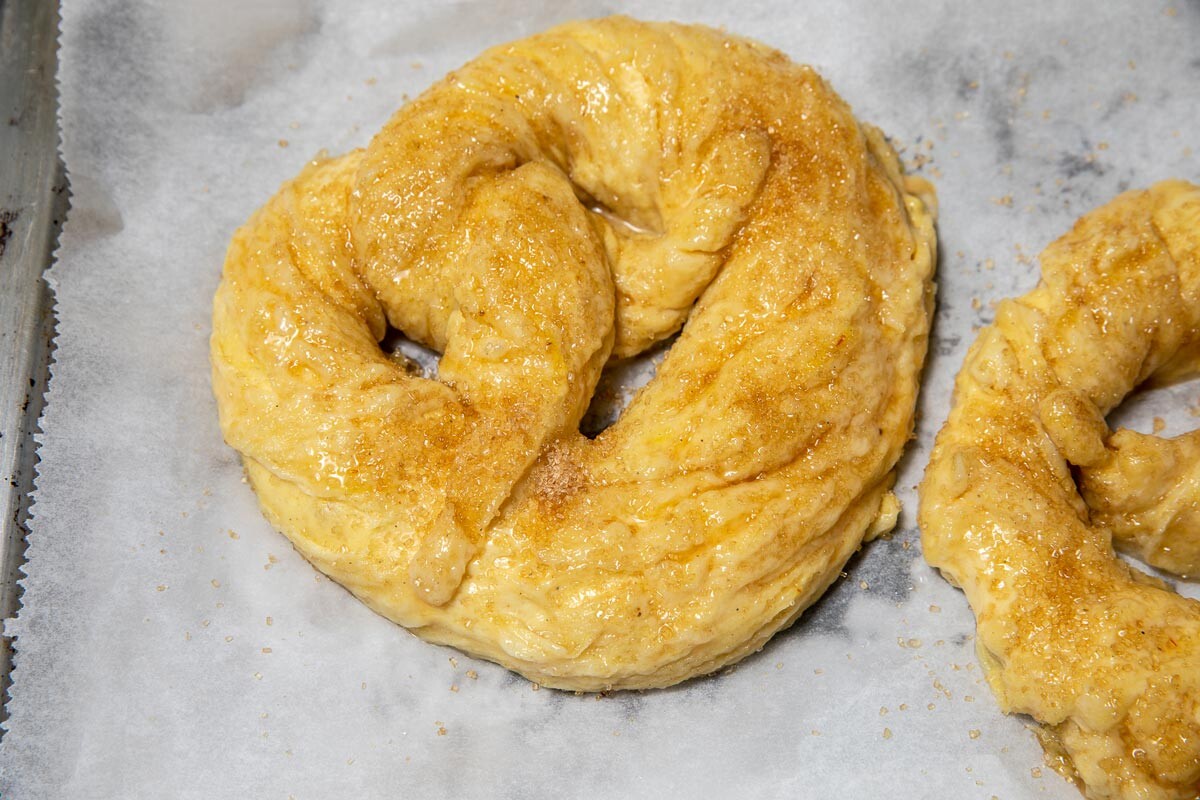 13. (You can omit this boiling step). Next, coat the krendel with the yolk and sugar, and place immediately in the oven for 15 minutes. 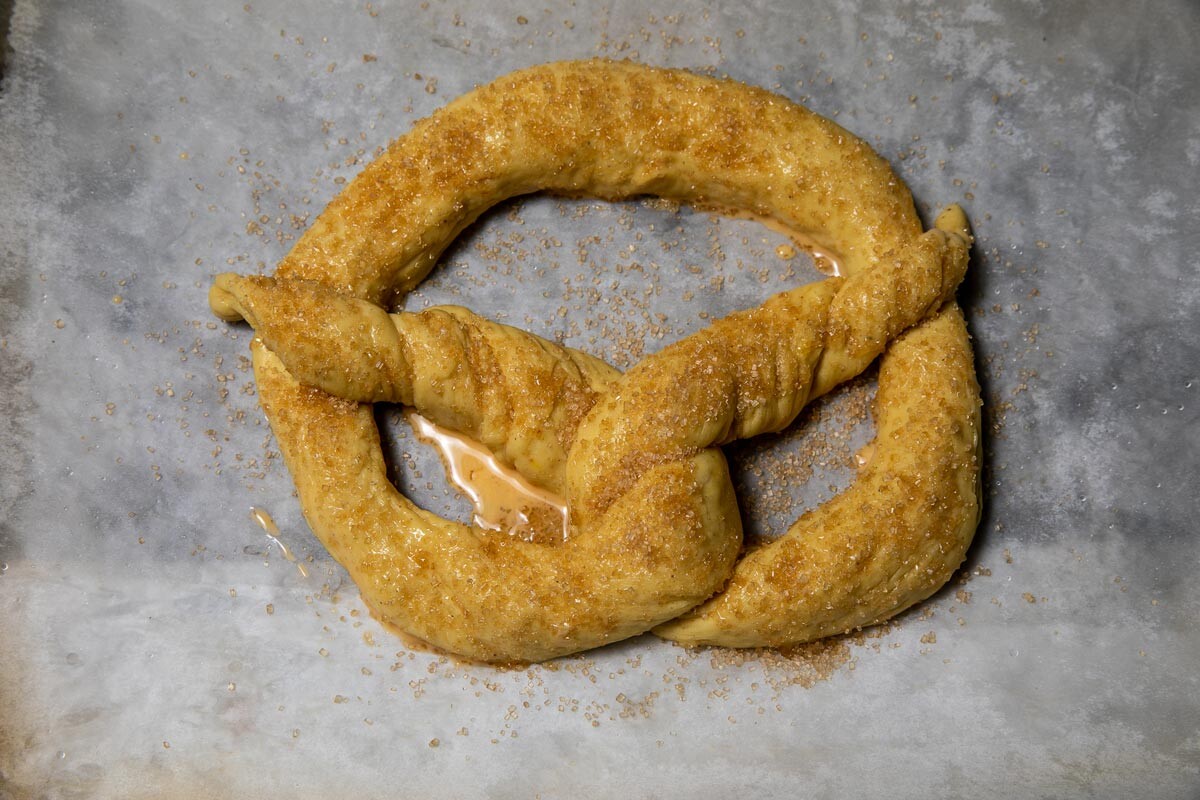 14. Both variations have amazing structure. 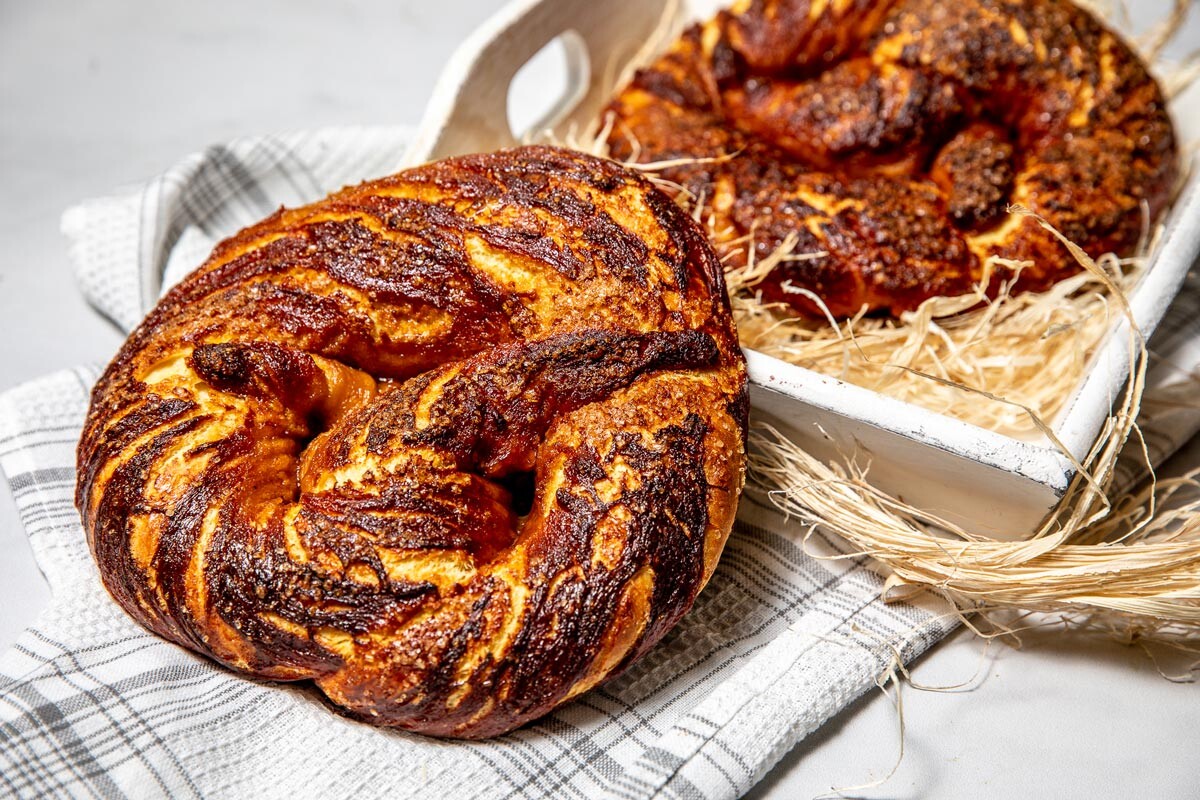 15. The krendel will be fluffier and shinier after boiling. A krendel without boiling holds its shape better and is a little denser in consistency. 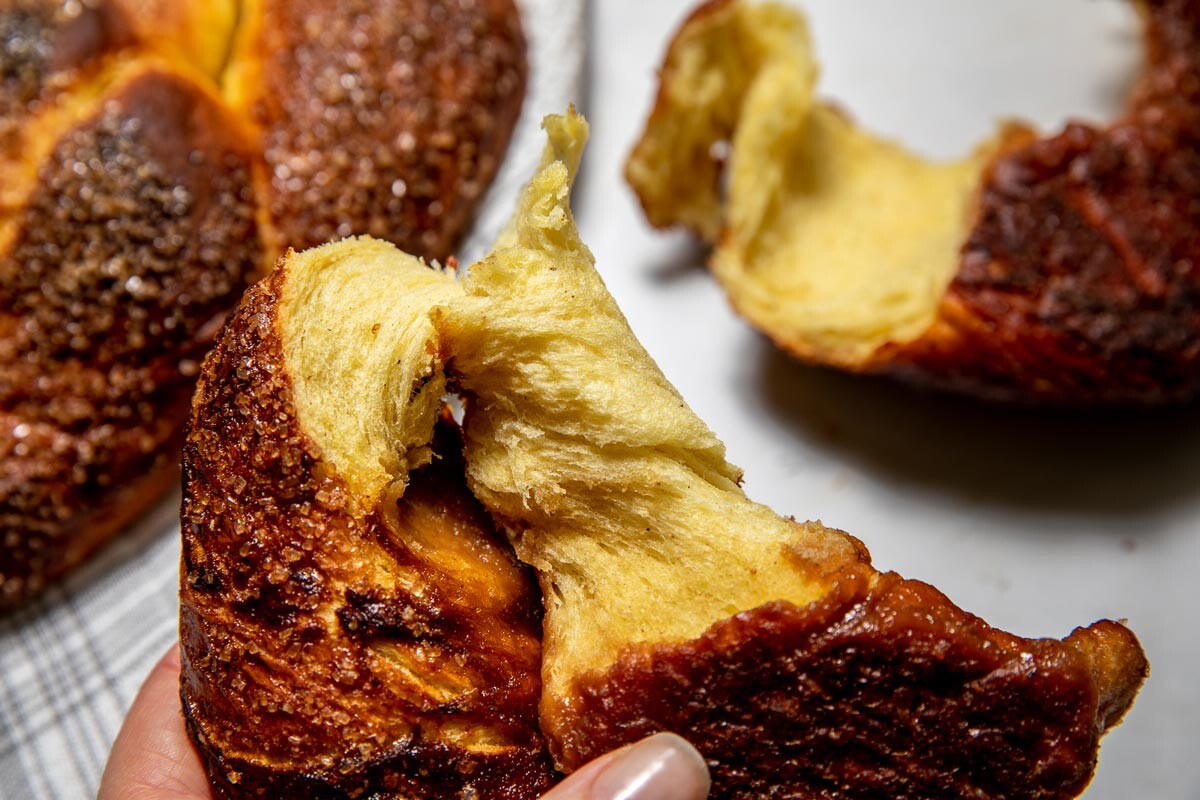