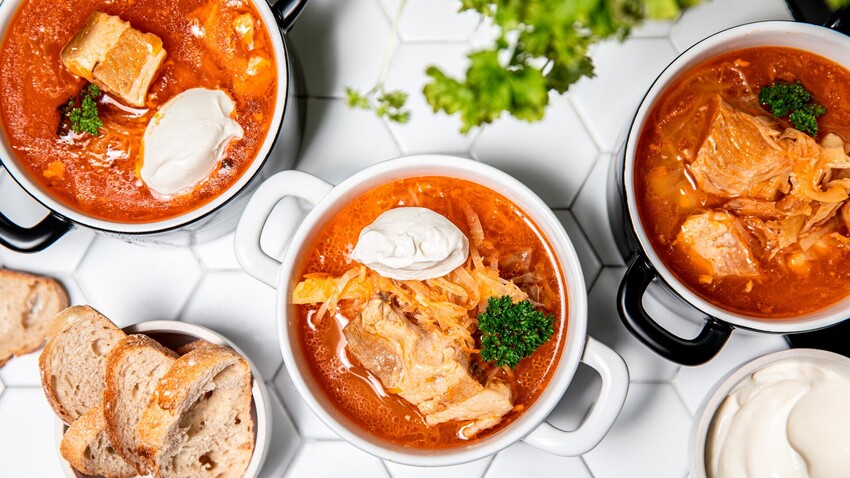 Shchi is the most popular Russian cabbage soup.

Yulia Mulino
No other dish characterizes Russian cuisine as well as shchi. If you are curious to know what soup Russians used to eat in the past, and will continue to eat for many years to come, then read further.

For more than a thousand years, shchi has been a staple in the diet of the Russian people. Most likely with Russia’s adoption of Christianity in the late 10th century, cabbage began to be used in soup, just like in the Byzantine lands.

Although the recipe and methods of making soup have changed over time, one main thing remains unchanged - adding a sour ingredient.

Why is it a sour soup?

Shchi can be versatile and seasonal. In late spring, for example, it is made of sorrel or nettle, but in summer fresh cabbage is used. The most famous traditional cabbage soup is made of sauerkraut.

Shchi can also be vegan, especially because in the olden days, during about 200 days a year, Russians would fast and abstain from animal-based foods. In this case, mushrooms, turnips, rye flour or buckwheat are added to the soup for more filling and flavor. Poor peasant families cooked "empty" cabbage soup with water and cabbage. In special cases, onion, lard or fish were added to shchi.

There were also ways to preserve soup for long-distance trips, freezing it in winter and drying the sauerkraut in summer. It is believed that vegetables should be added to the broth without prior cooking.

Sometimes the characteristic sour taste is achieved not only with sauerkraut but with the addition of kvass, salted mushrooms or sour apples.

How is shchi cooked now?

Today, we will talk about "rich" shchi, based on meat broth with sauerkraut which is most often made in Russia.

In central Russia, the fatty part of beef was used for meat shchi, and pork variations were popular in the southern and western regions. Combinations of both are common, too. When potatoes appeared in Russia in the early 18th century, it also began to be added to cabbage soup.

Before the influence of French cuisine came to Russia, flour dressing was an important component of soups, which gave extra thickness. Indeed, real shchi must be very thick. As a matter of fact, I still use it. Be sure to serve this soup with rye bread, fresh herbs and heavy sour cream. But the soup’s main secret is to let it sit for a day before serving.

In preparing the soup, I adjusted the classical recipe to modern life. For example, I made cabbage soup with two kinds of meat, beef bone and ham. I used homemade sour cabbage, made a roast of onions and roots, and added a custard-like flour mixture for thickness.

The classic recipe doesn't contain tomato paste, but in recent years housewives have been adding some for color, just as I do. If any of these foods don't work for you, they can be substituted or eliminated.

Ingredients for 8 servings (5 liters of water): 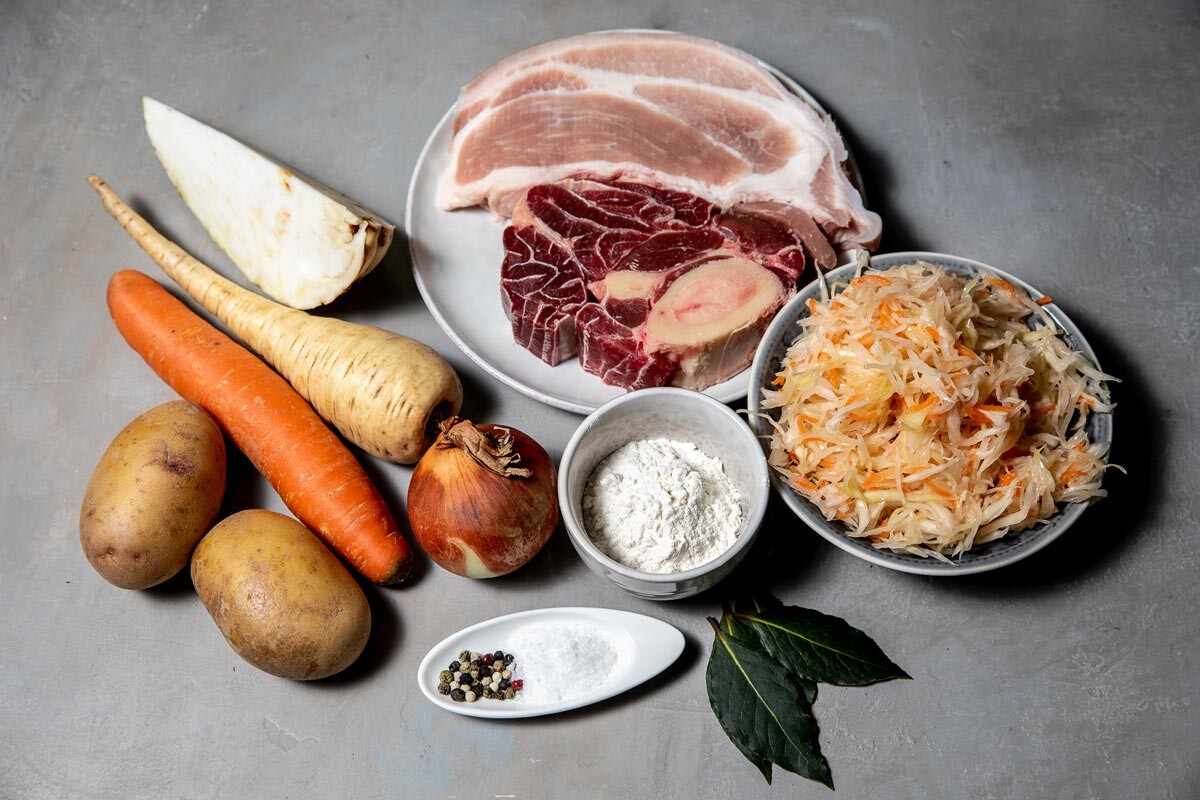 1. Place the pieces of meat in water and bring to a boil. 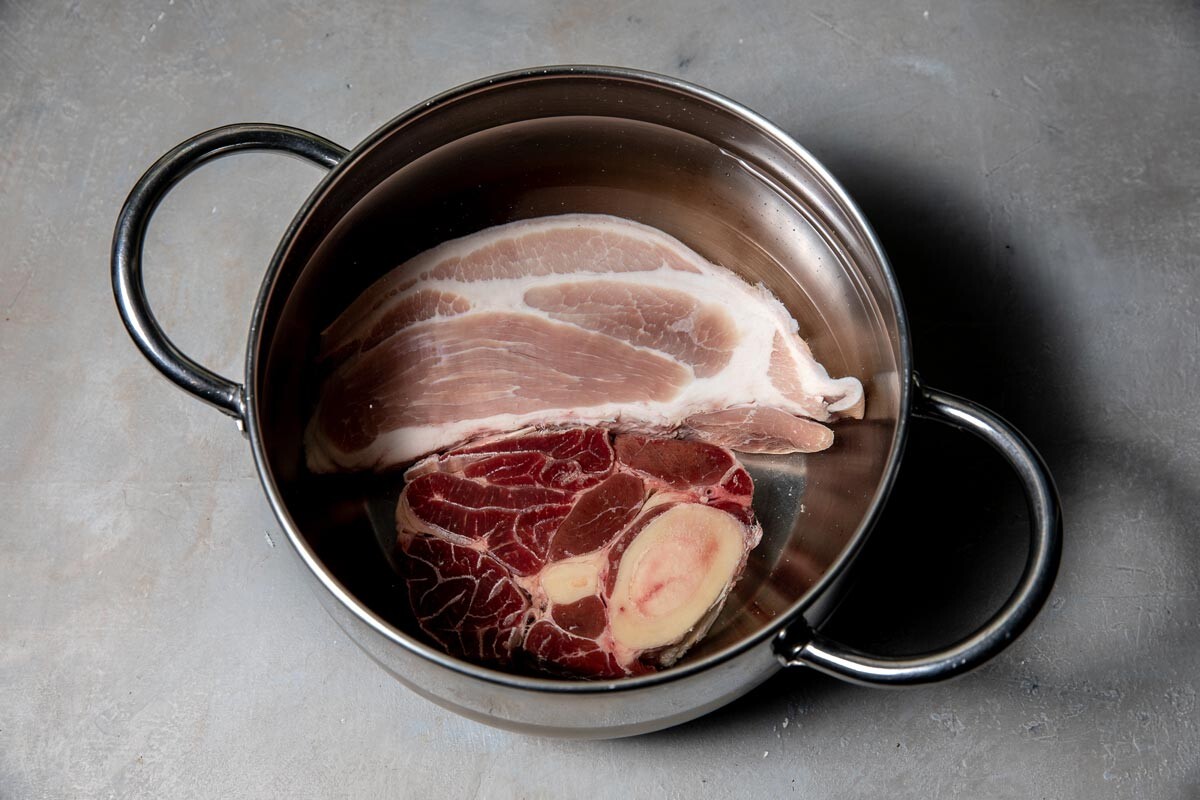 2. After it boils, skim off the foam, add whole carrots and onions. Cook meat on low heat for 2 to 2.5 hours. Add spices and salt after about 2 hours of boiling. 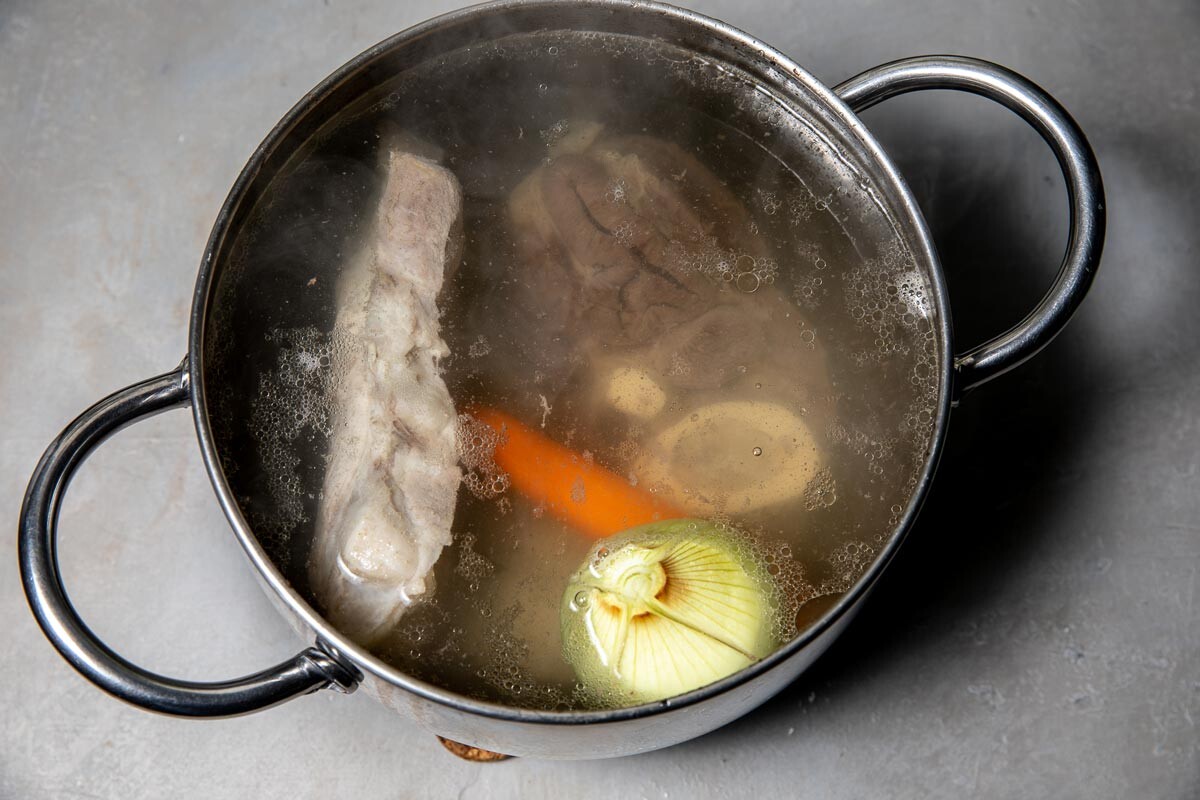 3. To prepare the cabbage, stew it in butter until soft, adding meat broth. 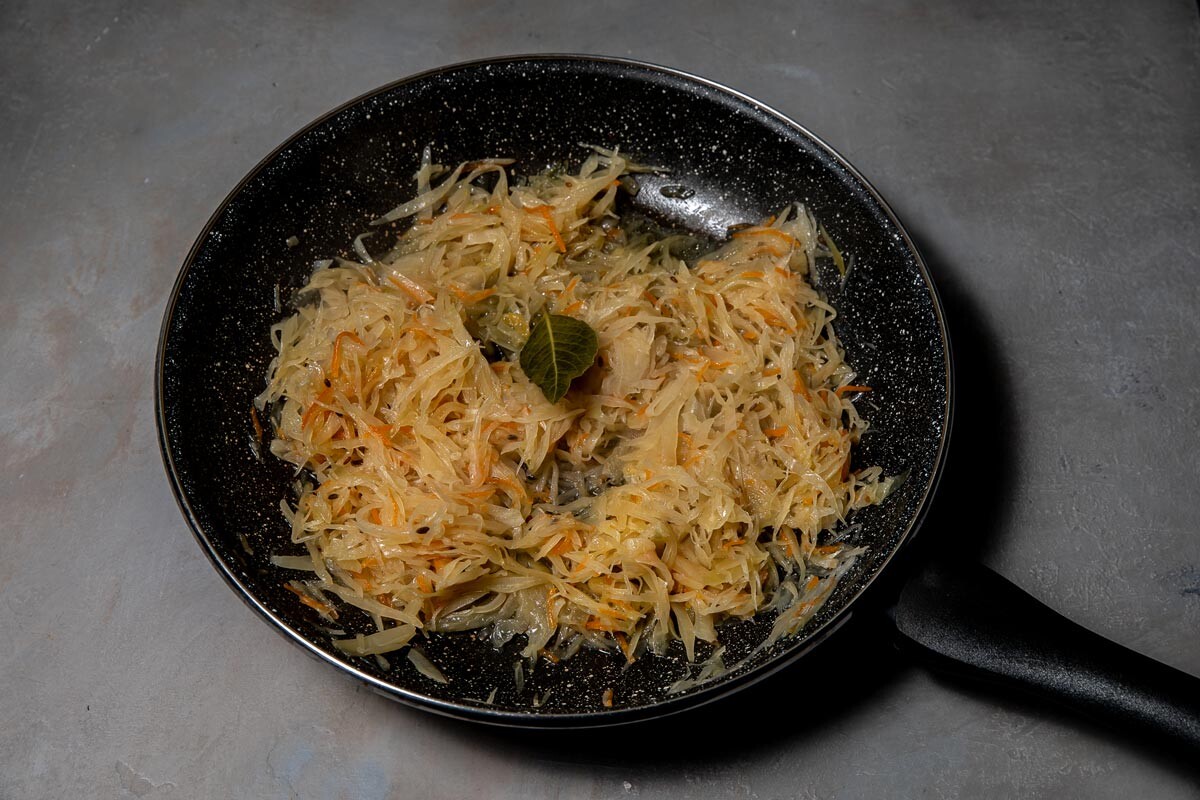 4. After 2 hours, start preparing the vegetables. Slice carrots, parsnips and celery; cut the onion into half rings and fry in vegetable oil. Add a teaspoon of tomato paste. 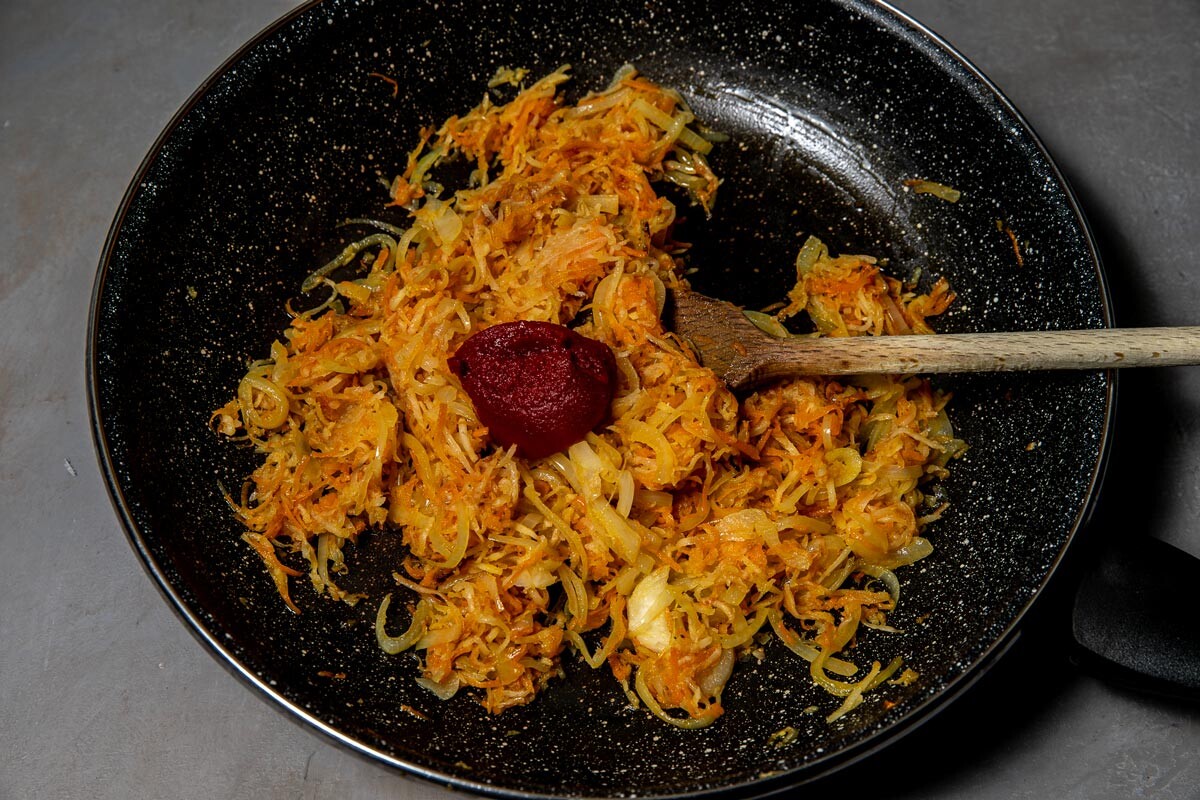 5. When the meat is ready, remove from the broth with onions and carrots. 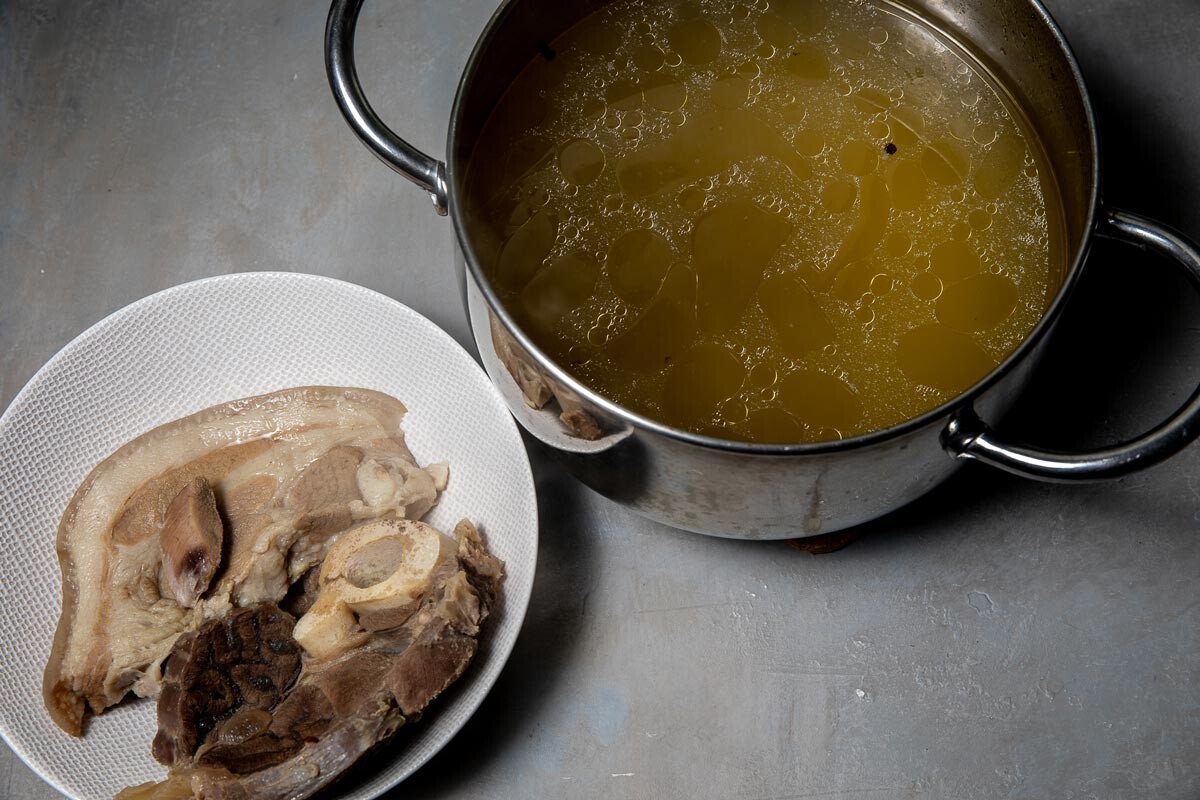 6. To prepare the flour dressing, pour some broth into a glass; let it cool. Put flour in a dry pan and fry a little, stirring constantly. Add the cooled broth to the flour and stir until homogeneous. 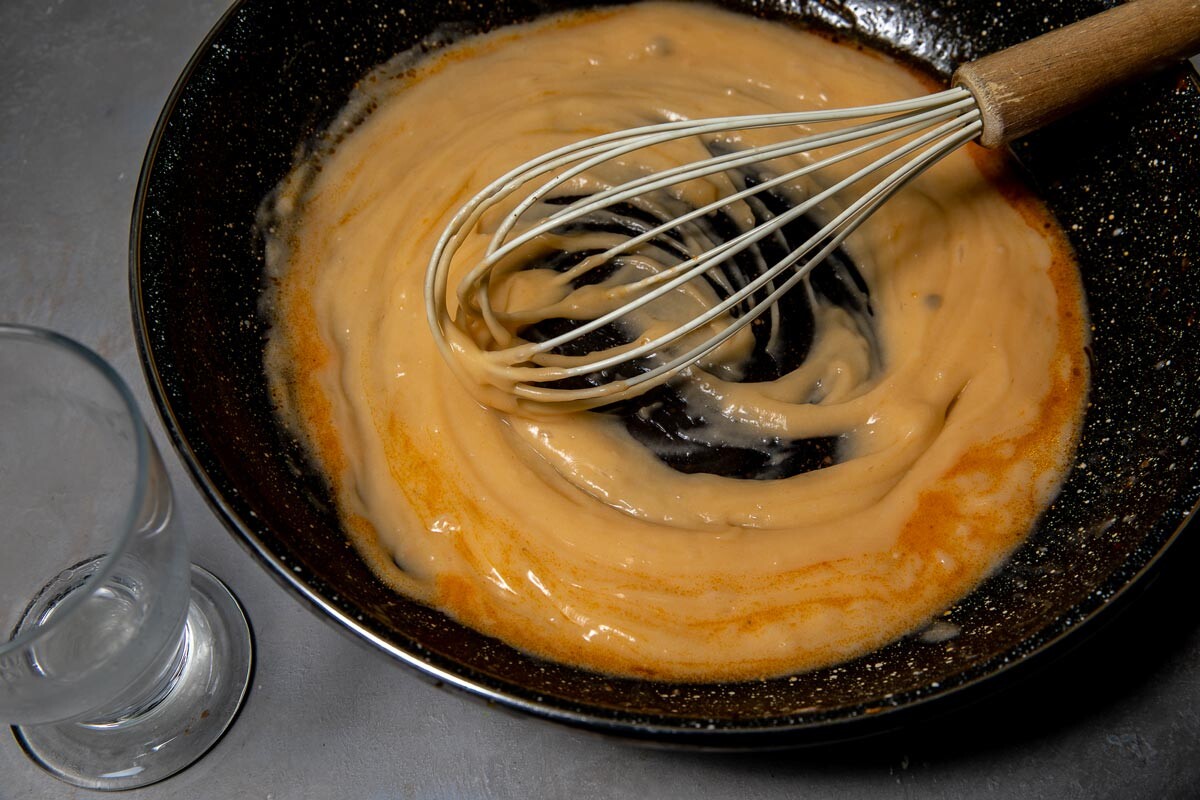 7. Add potatoes and boil for 10 minutes. 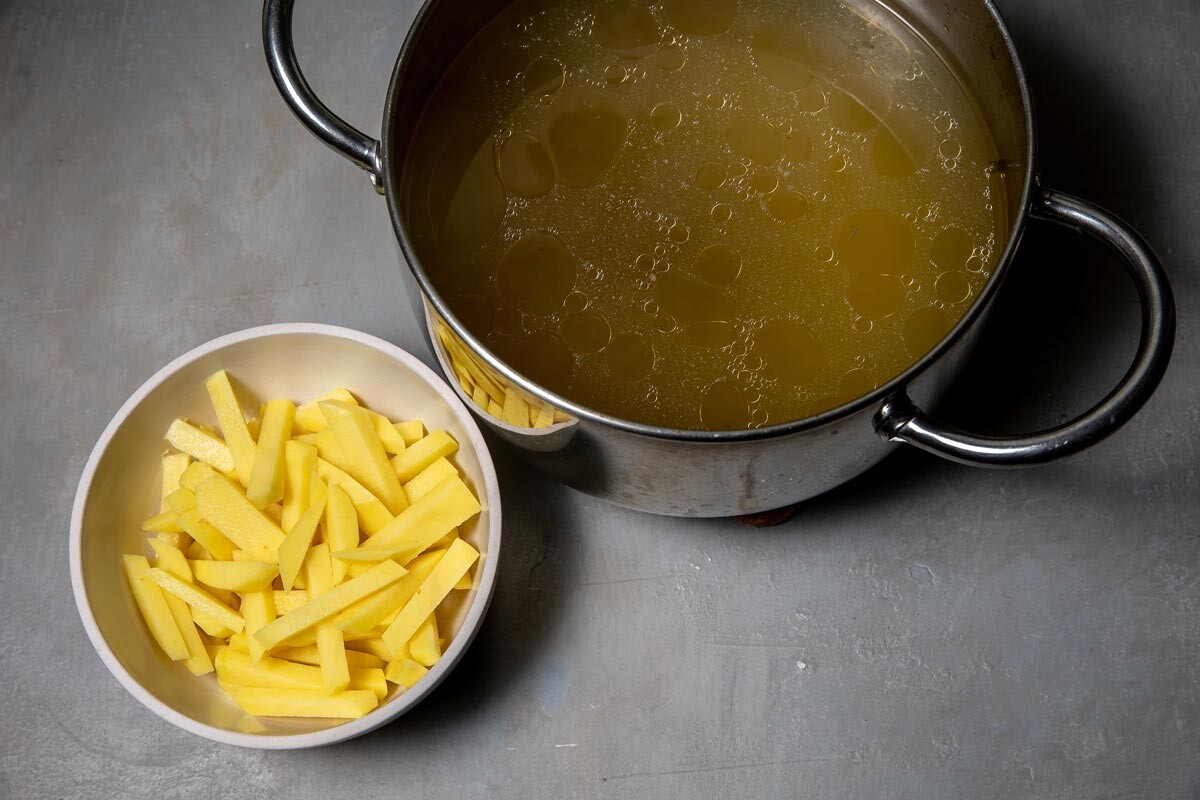 8. Put the braised cabbage, sautéed vegetables and meat in a pot, and cook for another 10 minutes. 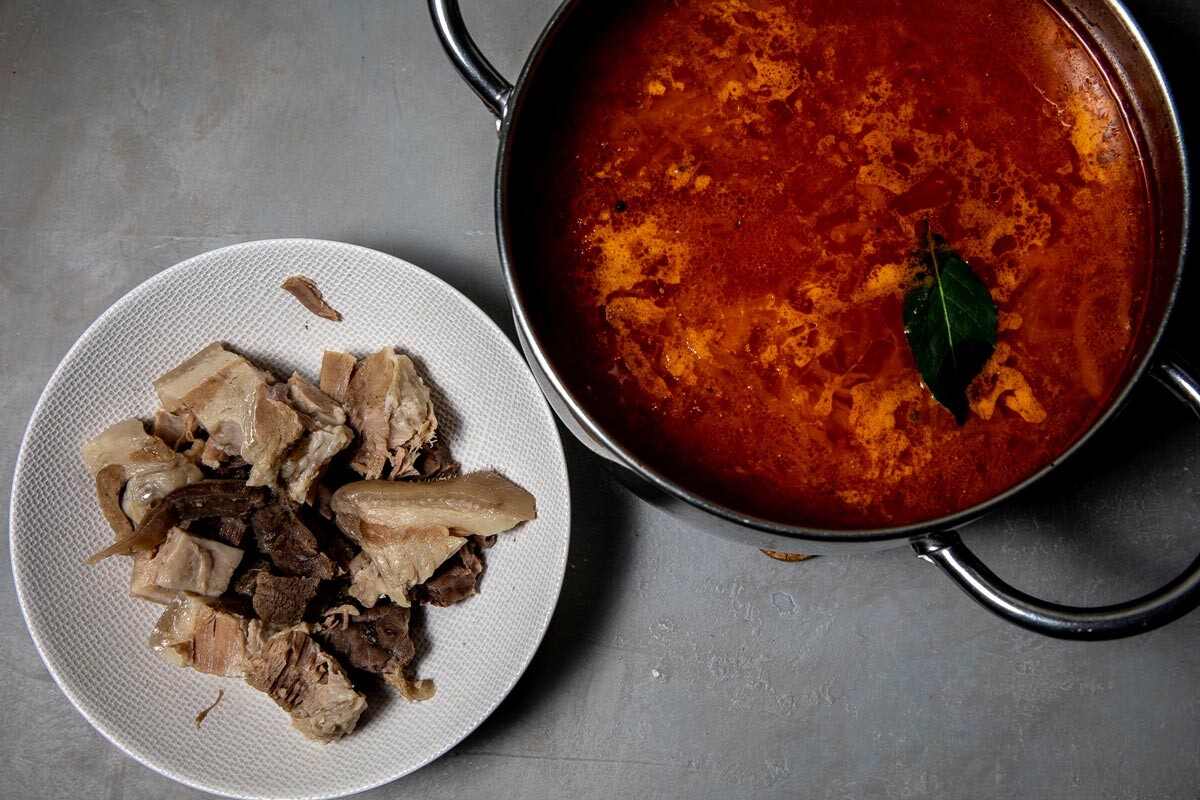 9. Add the flour dressing and leave the soup to infuse overnight, covered. 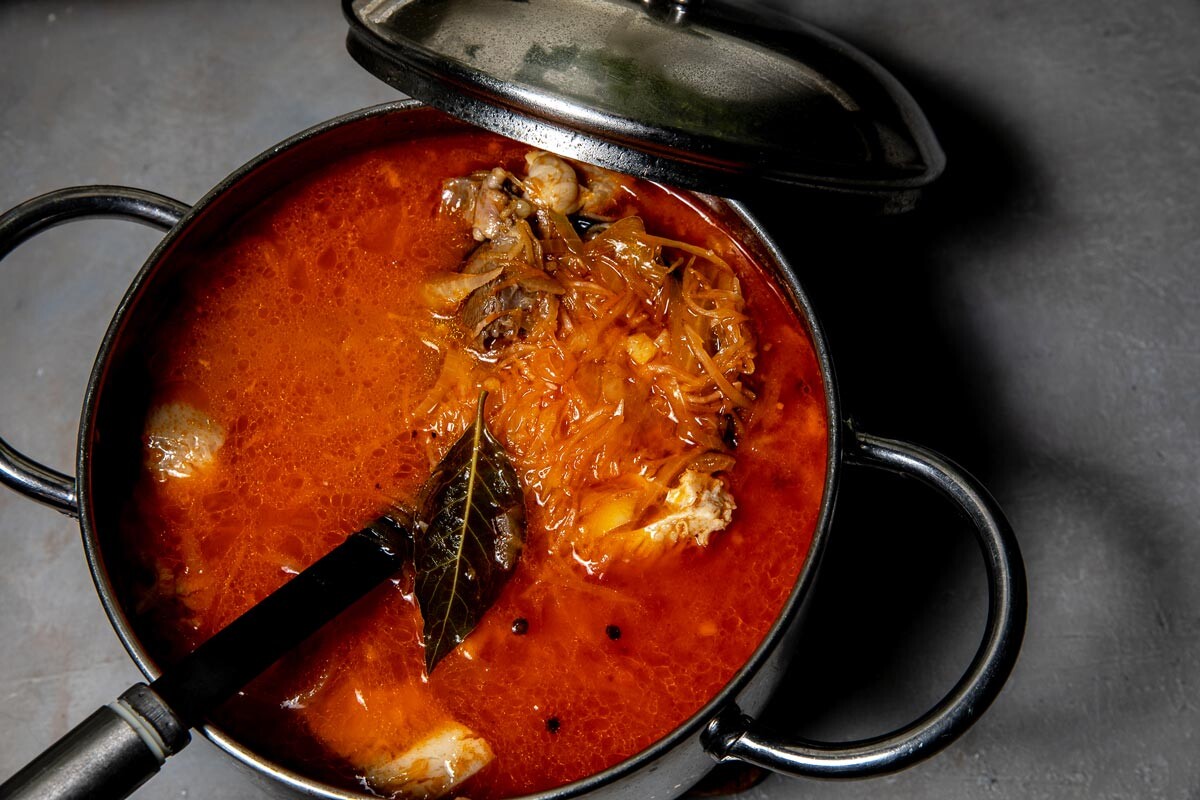 10. The next day, when warming up shchi, squeeze garlic and add another bay leaf. 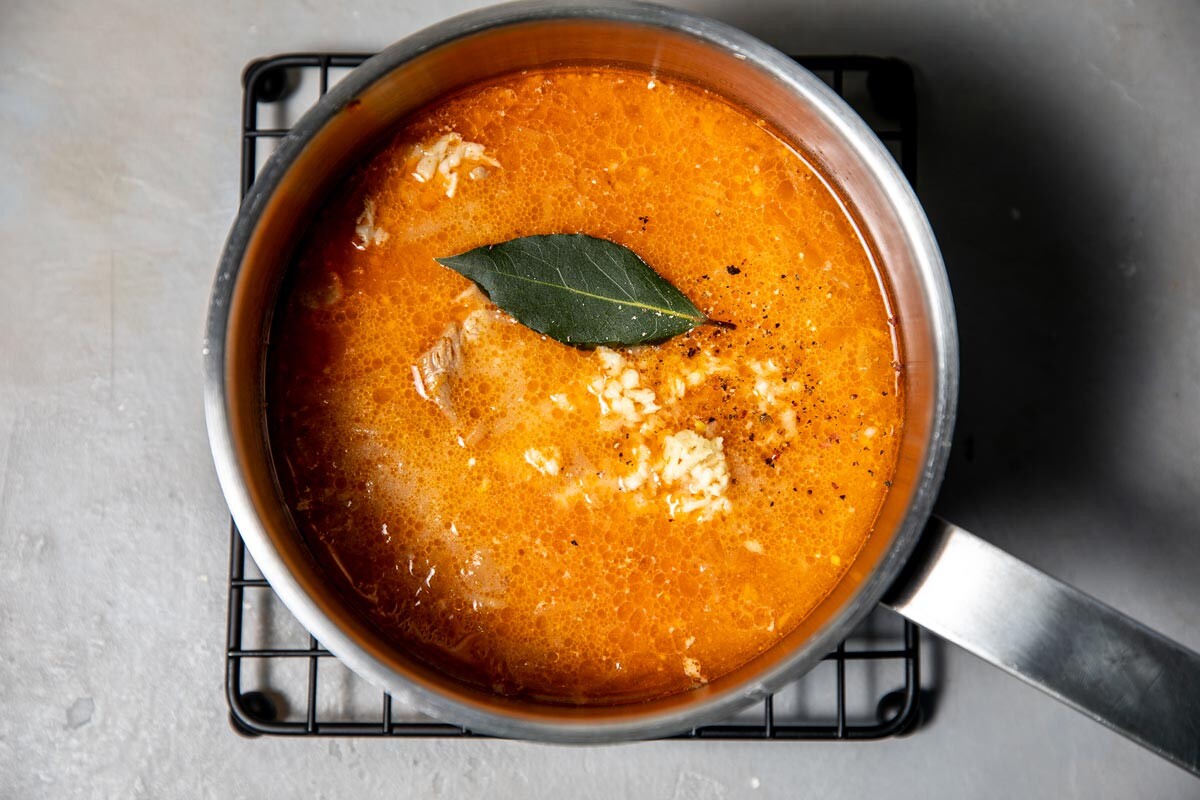 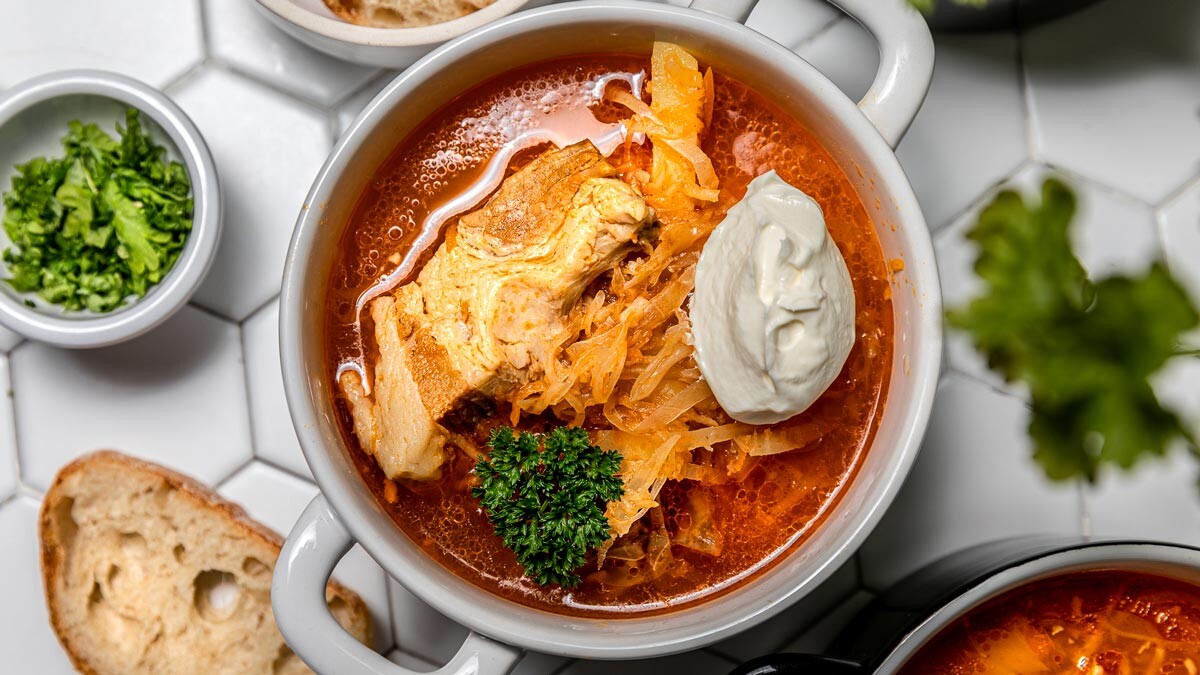 READ MORE: The ultimate guide on how to cook borsch