The ultimate guide on how to cook borsch 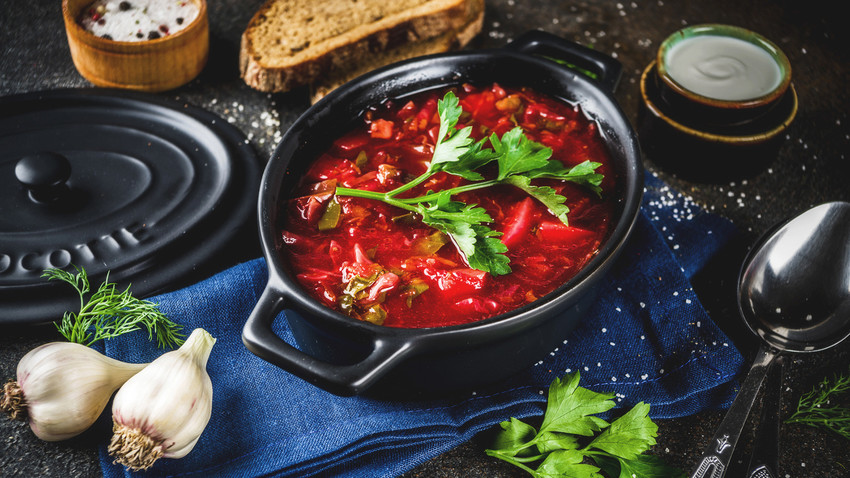 Legion Media
Here are 5 tips on how to make an ideal beet-based soup. Don’t ask after this if your borsch is burgundy enough.

The origin of borsch is unknown, and most likely it first appeared on the lands previously ruled by Kievan Rus. One thing is for sure, however, it now enjoys immense popularity and diversity all over Eastern Europe. In Ukraine, borsch is pointless without beets and lard. In Russia, it used to be more of a sour soup, with added hogweed leaves and cabbage, and even mushrooms were added. Potatoes, tomatoes and sweet peppers were added to borsch in the early 1930s. In Soviet times, this soup was always found on the menus of every restaurant and diner.

Here we have assembled  all our tips on how to make this venerable Slavic dish - borsch.

1. The bigger, the better

First of all, you have to understand that borsch is not prepared in small volumes. You’ll need at least a 3-liter pot to start. Don’t worry about having too much. Friends will find themselves at your doors when they know that you’re making borsch. And if not, this is the kind of soup that gets better on the second day, and you can keep savoring it because it never gets old.

2. Add a lot of meat and bones

The beginning of a great borsch is the meaty stock. Ribs, shank cuts or oxtails are great because they make your stock super rich. If you get bone marrow, unquestioningly add it. The famous writer, Mikhail Bulgakov, in his novel MasterandMargarita, mentioned the bone marrow as the best addition to borsch! Smoked pork ribs or hock will make your stock smoky and luscious. And don’t forget about the meat; there should be a lot of meat in borsch.

After the stock issue is resolved, you can move to vegetables. The peculiarity of the borsch recipe is primarily in the way the beets are cooked. They can be prepared in several ways: steamed, boiled or baked, before adding them to the soup. We found baking to be the best way to do so because it concentrates the natural sweetness in this vegetable and preserves the vibrant beet color. The addition of a spoon of simple table vinegar will also help with the color. Cooked beets are mixed with bell peppers, followed by the addition of tomatoes and tomato paste. As a rule, onions, carrots and garlic are cooked separately. You can add the beets five minutes before the end if you’re afraid to color the potatoes. If that’s not about you, then just follow our instructions below.

After all the vegetables, one of the most essential parts of borsch is seasoning. Black pepper, herbs such as parsley and dill, bay leaf and extra garlic are very important for the taste. One other thing that adds a special character to your soup is cooking the vegetables with lard.

The final touch is a spoonful of rich sour cream. It just adds this extra kick that will leave you completely exalted. After feasting on borsch like this you’ll have to take a short break, even though the divine smell of this soup won’t allow you to think about anything else. 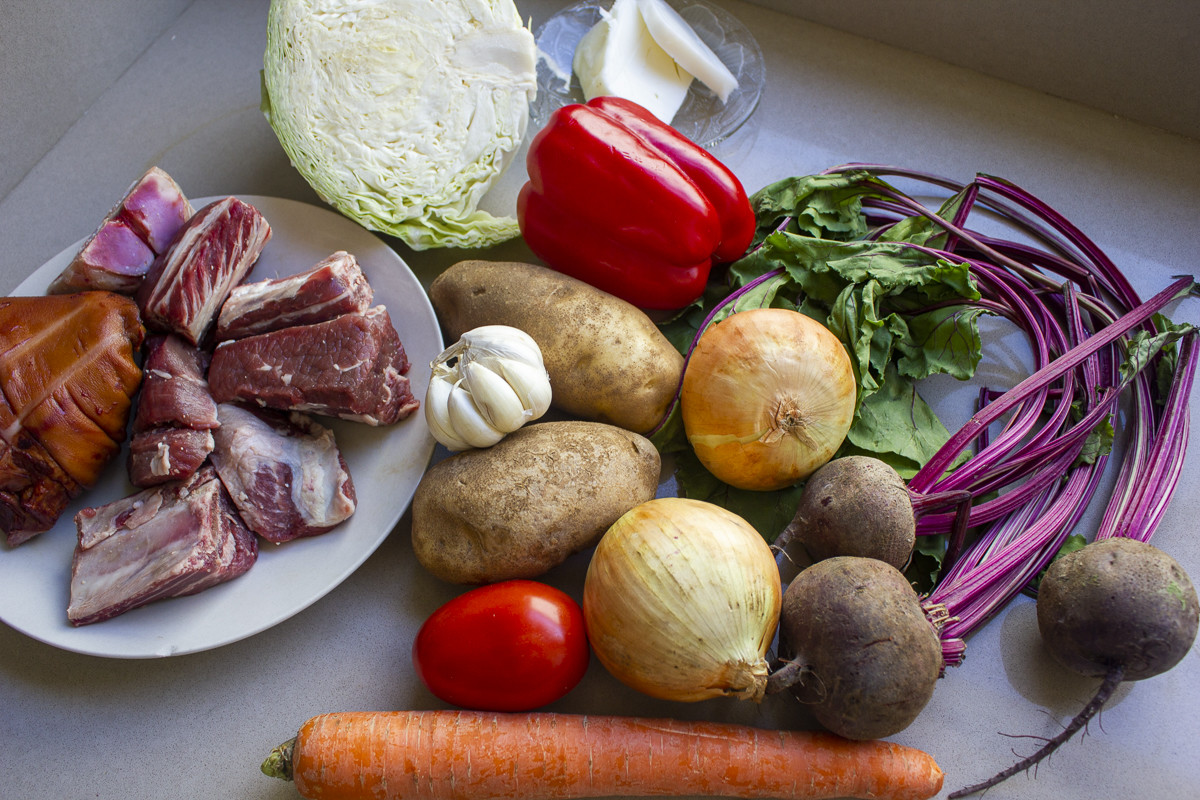 1. Prepare your stock. Place your meat in a large pot and cover with 3-4 liters of cold water. Add the bay leaf and a few black peppercorns. Bring the liquid to a boil, and skim off the foam and impurities. Once the stock no longer releases foam, lower the heat to medium and cover your pot with a lid. Leave the stock to cook for 2-3 hours. 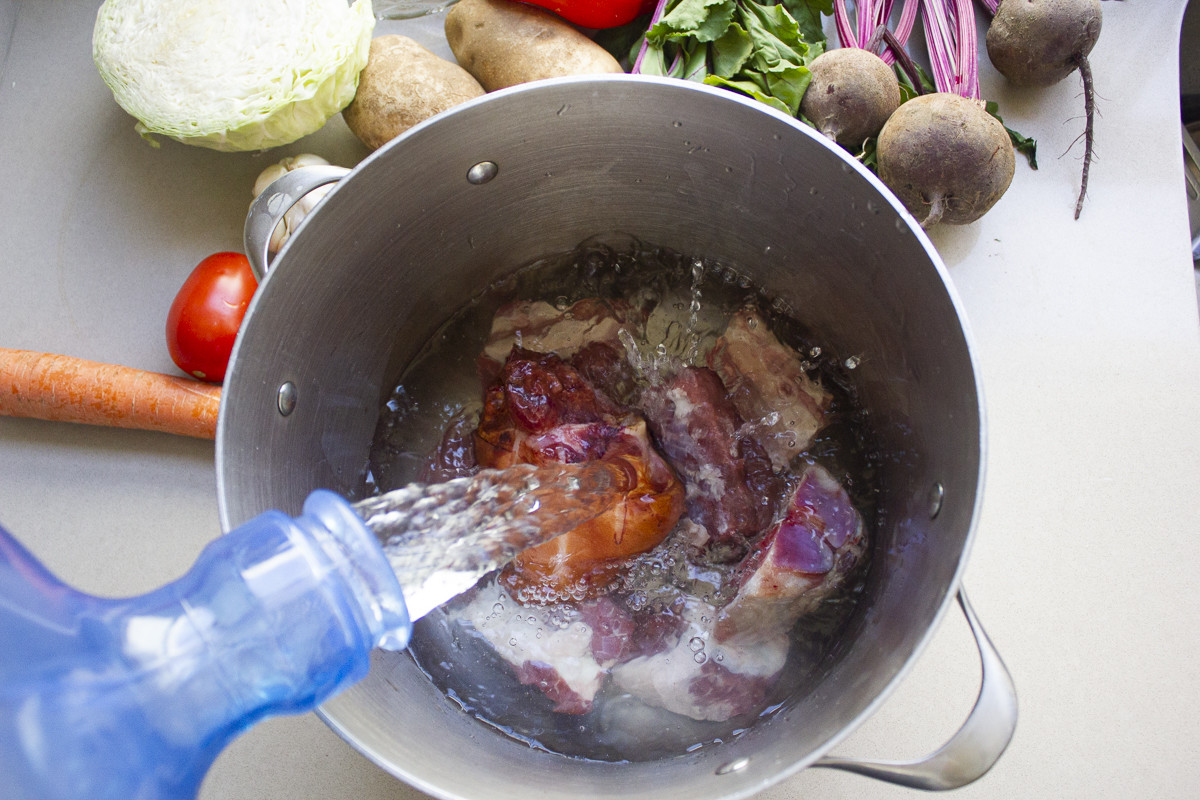 2. When the meat is falling off the bone your stock is ready. Remove the bones and meat from your stock. Cut the meat into smaller pieces and put back in the stock. Discard the bones. 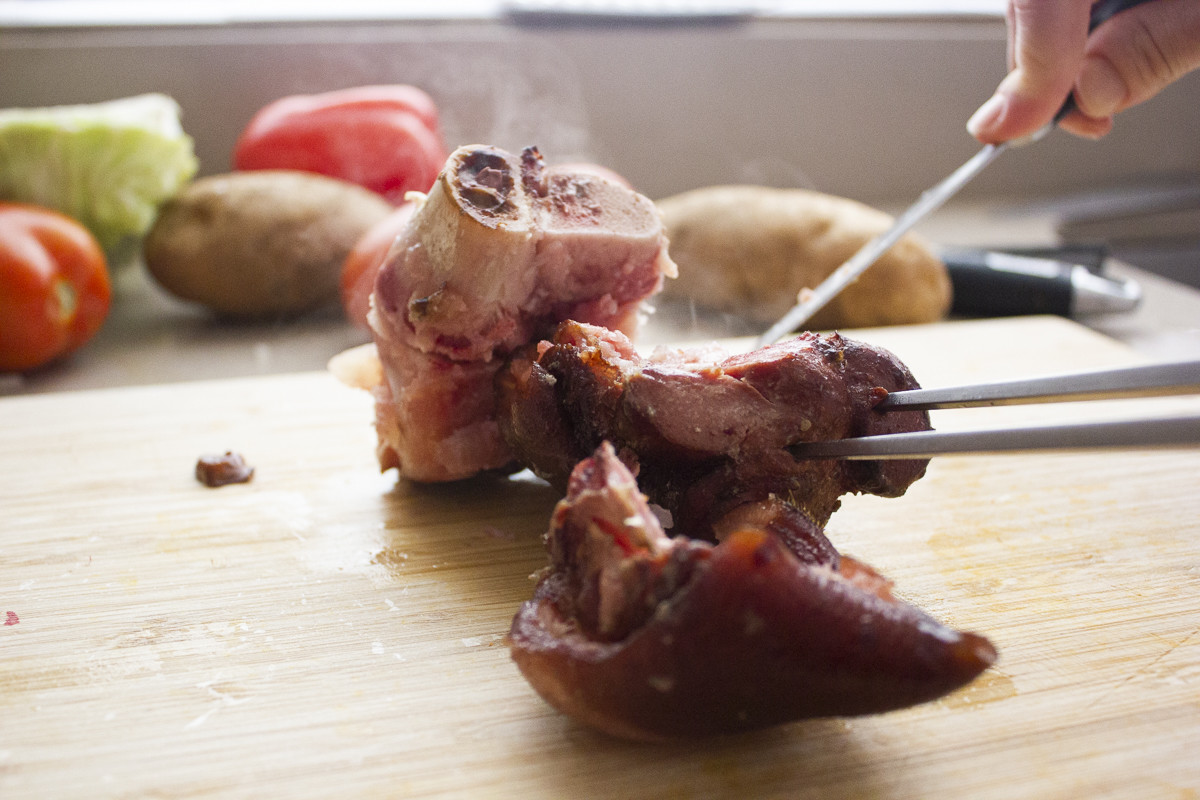 3. While your stock is cooking, prepare the vegetables. Wash your beets, toss them in oil  and wrap each with aluminum foil. 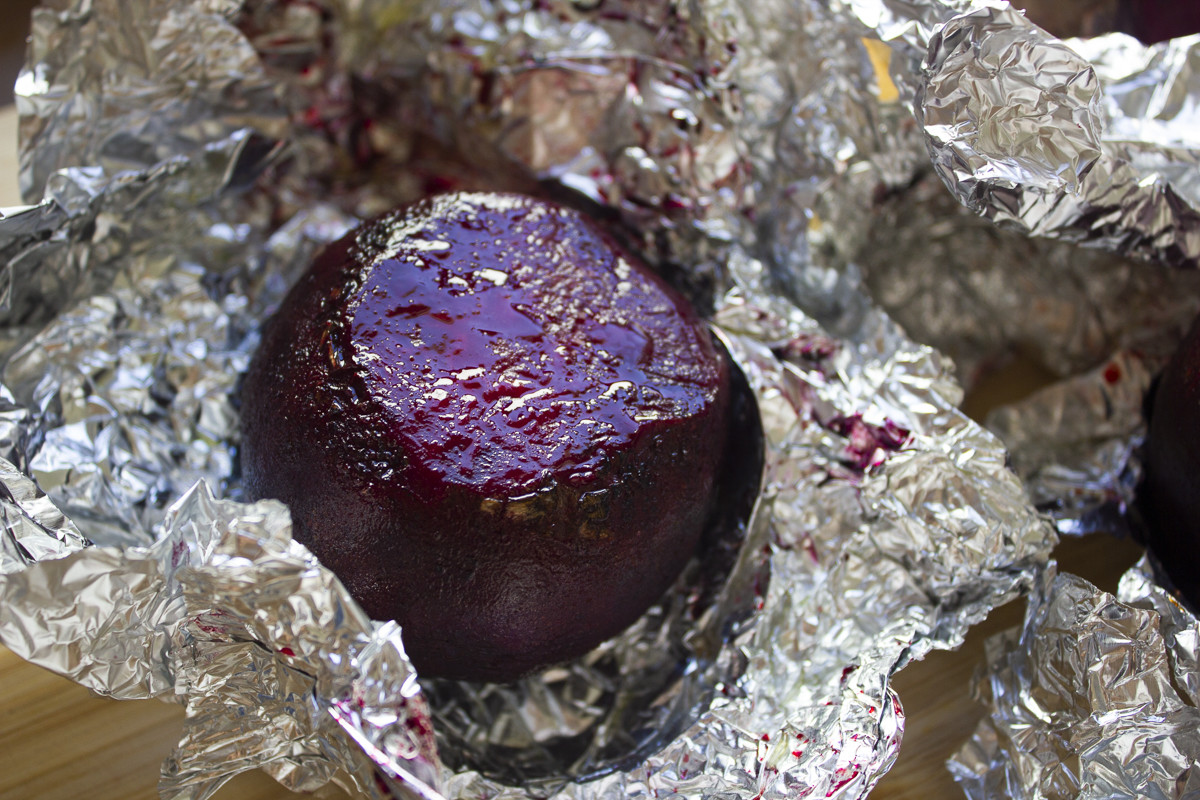 4. Heat the oven to 200°C, and bake your beets for 1-1.5 hours until tender in the center. Once cooked, peel your beets and grate. 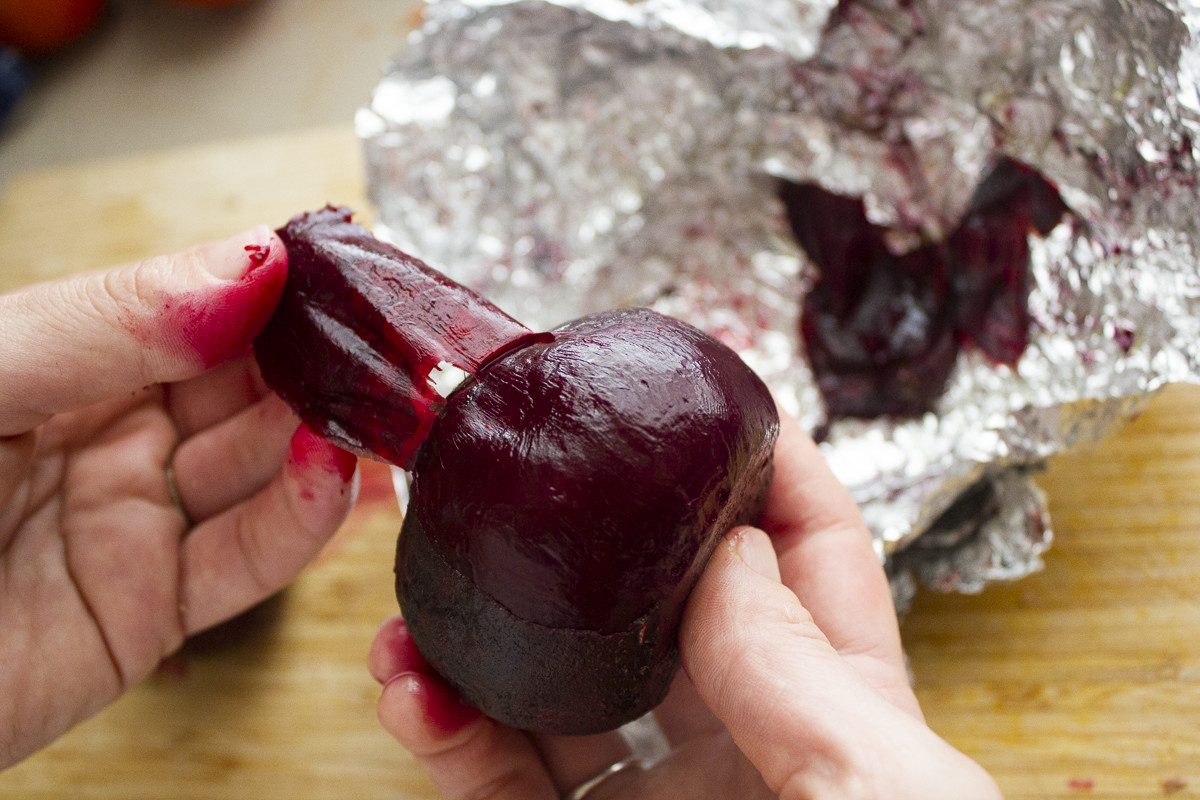 5. Dice the red bell pepper and tomatoes, and cook in a pan with some lard. 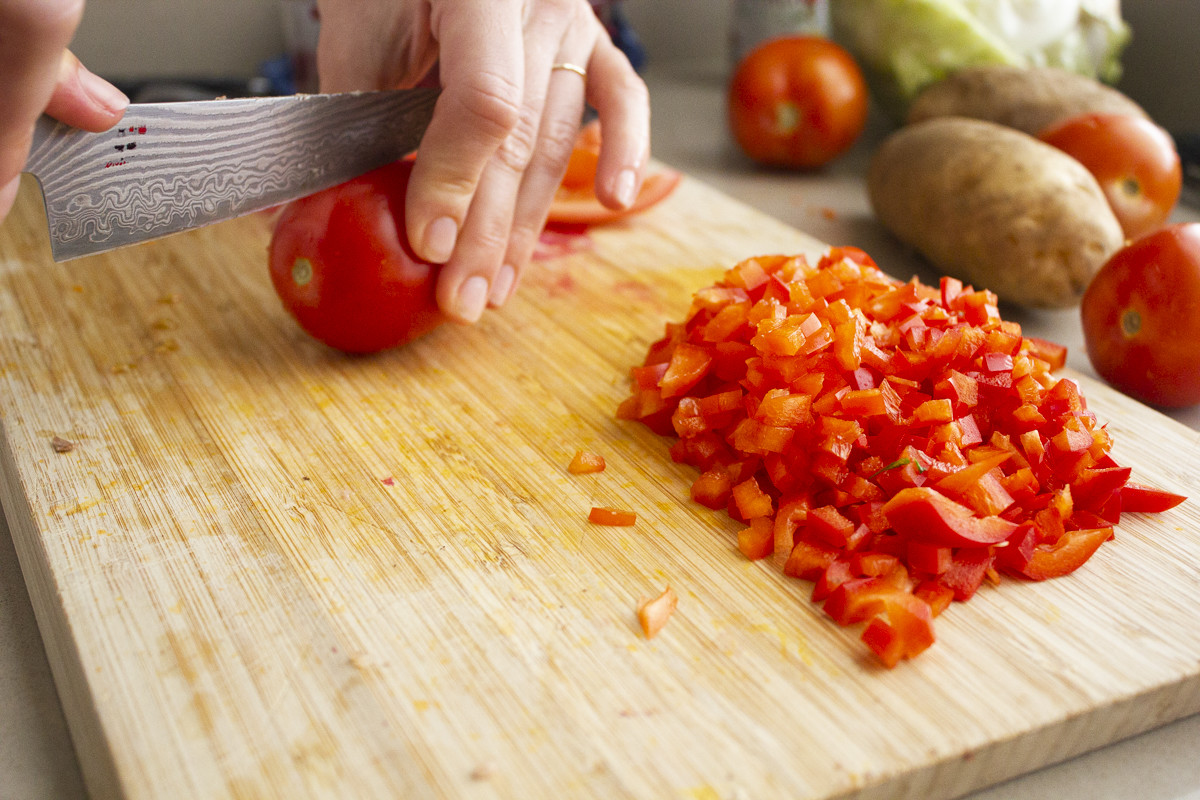 7. Peel and grate your carrot. 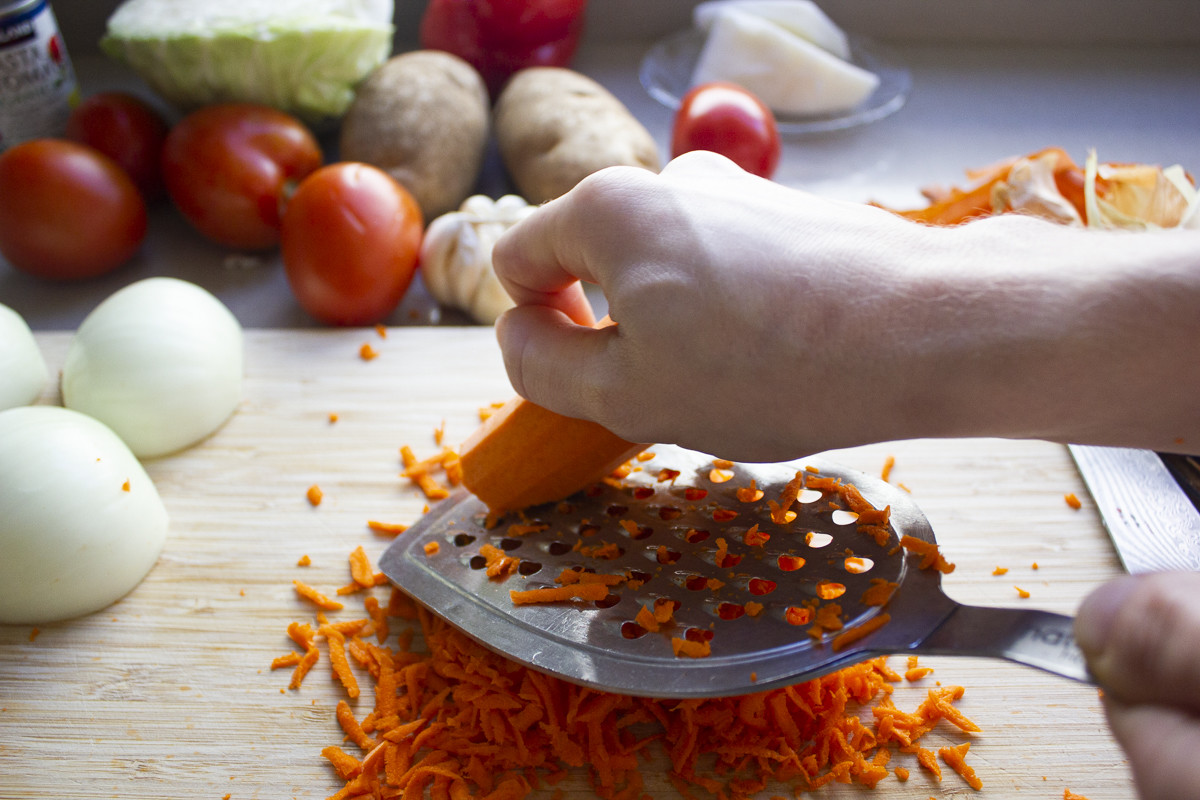 8. Dice the onions and chop the garlic. 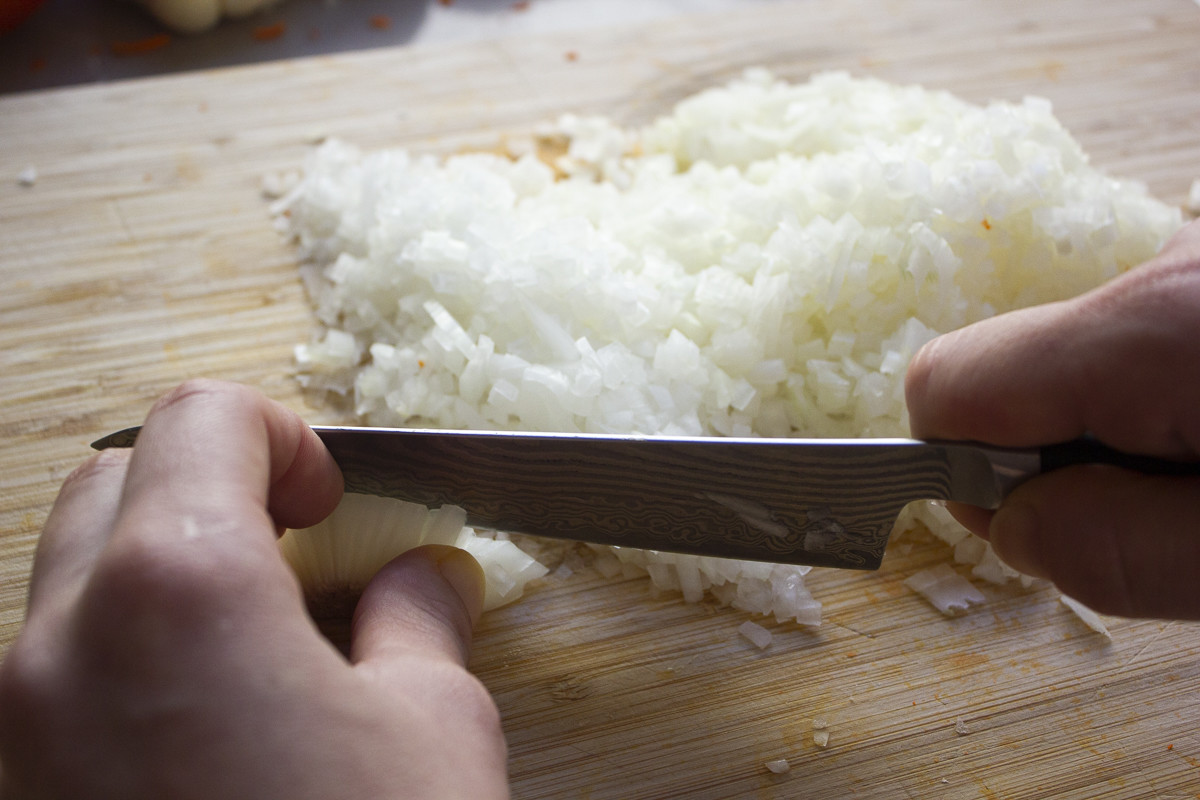 9. In a separate pan add lard, and cook the onions  until soft and completely translucent. To your onions, add the grated carrot, and once it’s tender add the garlic. Cook for 1 more minute. 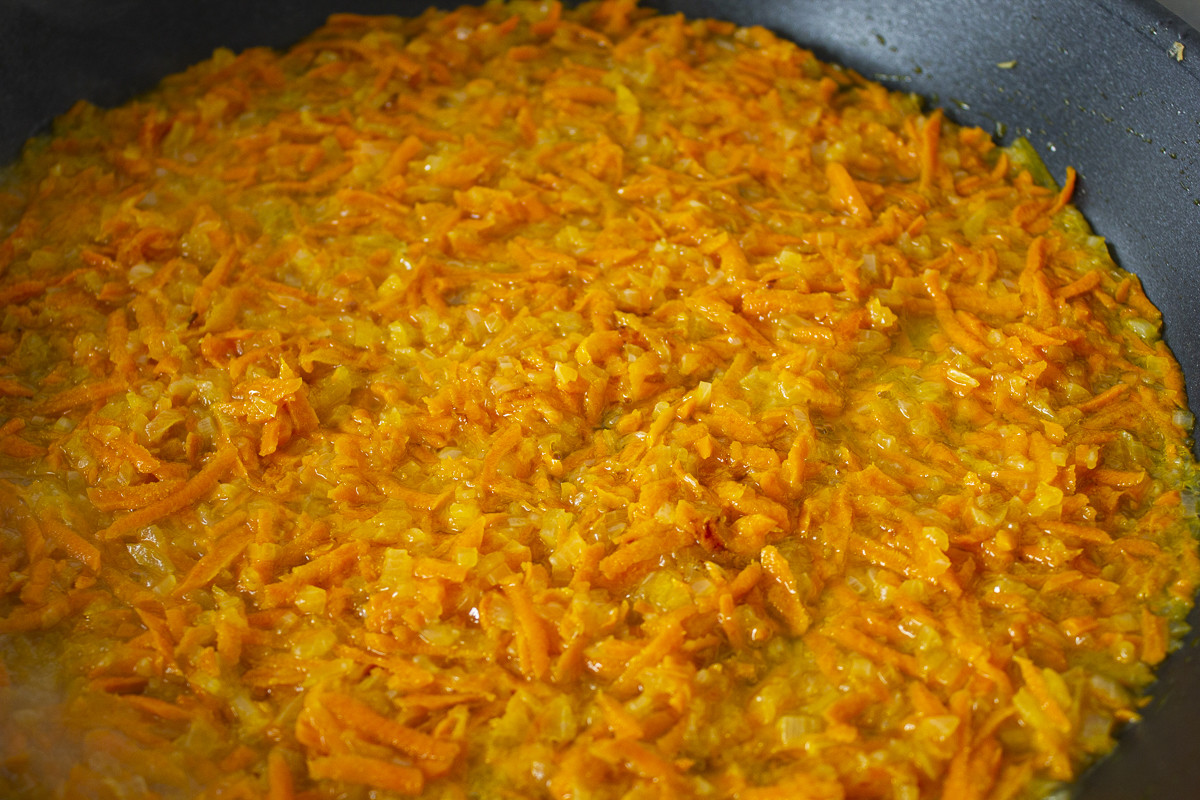 10. To your stock with meat, add your onion/carrot mixture first. Bring it to a simmer and cook for 3 minutes. Then add your beet mixture and bring to a simmer again. 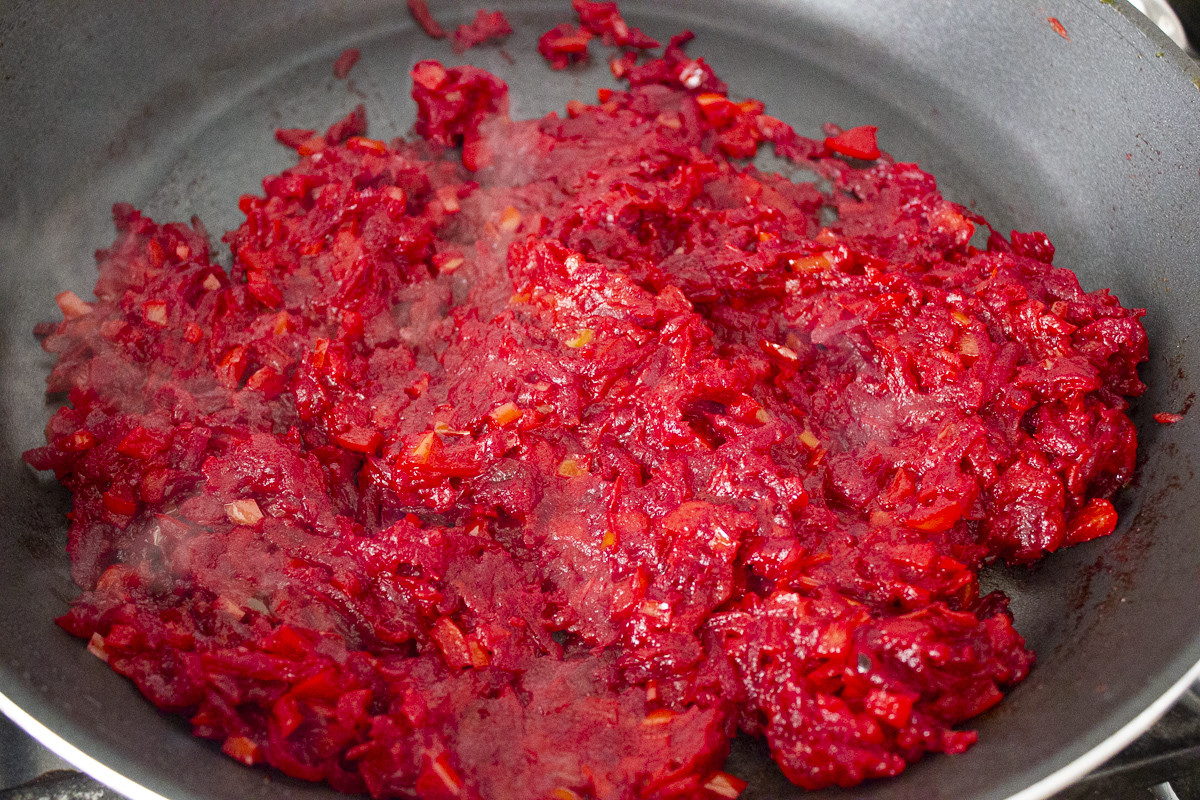 11. While your soup is lightly simmering, peel and cut the potatoes into small cubes. Add to the soup and cook for about 8-10 minutes until tender. 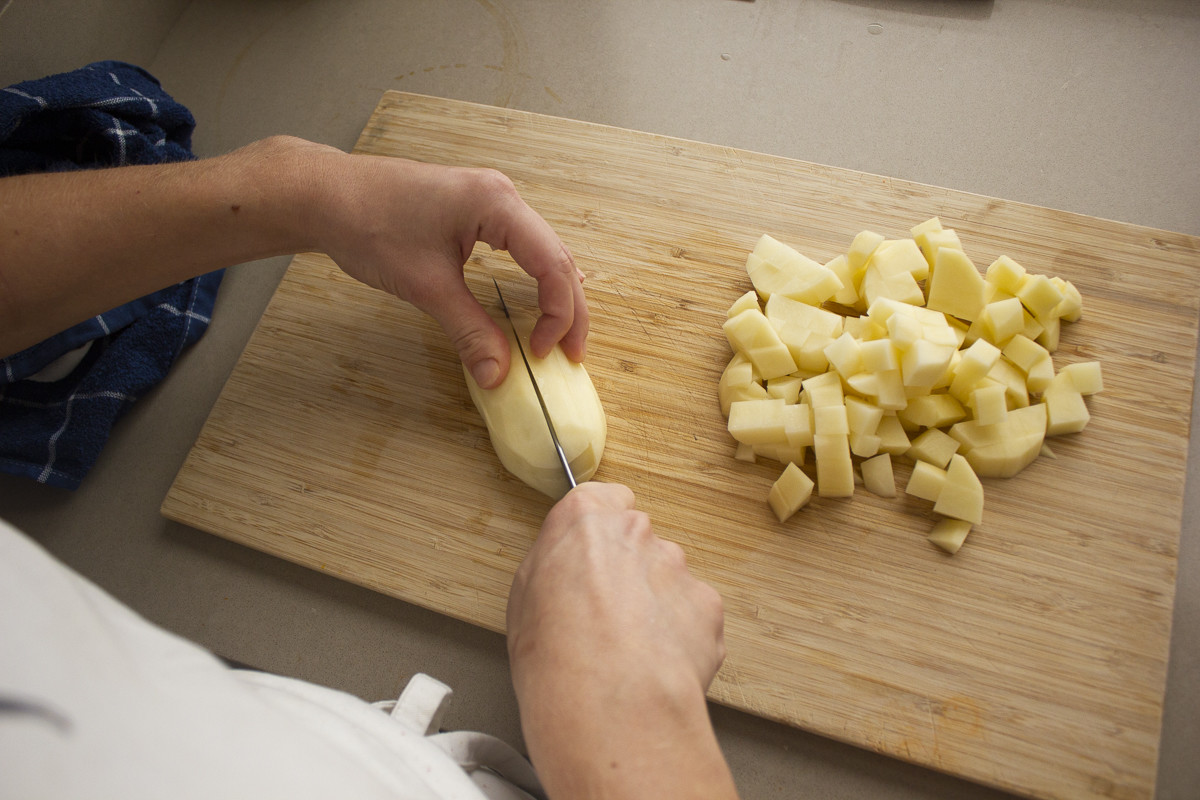 12. Cut your cabbage into strips and add to the soup after the potatoes are cooked. The cabbage will take about 3 minutes to cook. 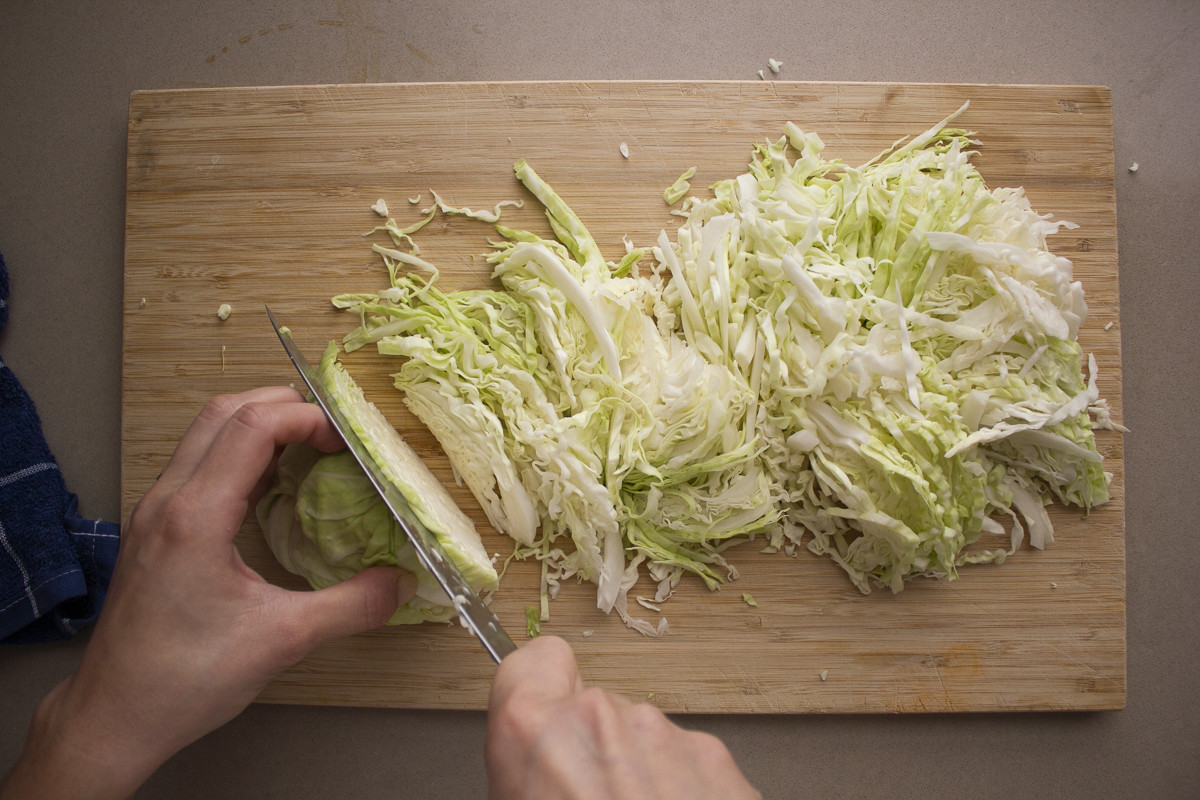 13. After all the vegetables have been added season your borsch with salt, black pepper and herbs. Now turn off the heat, put a lid on the pot and let the soup infuse for at least one hour. 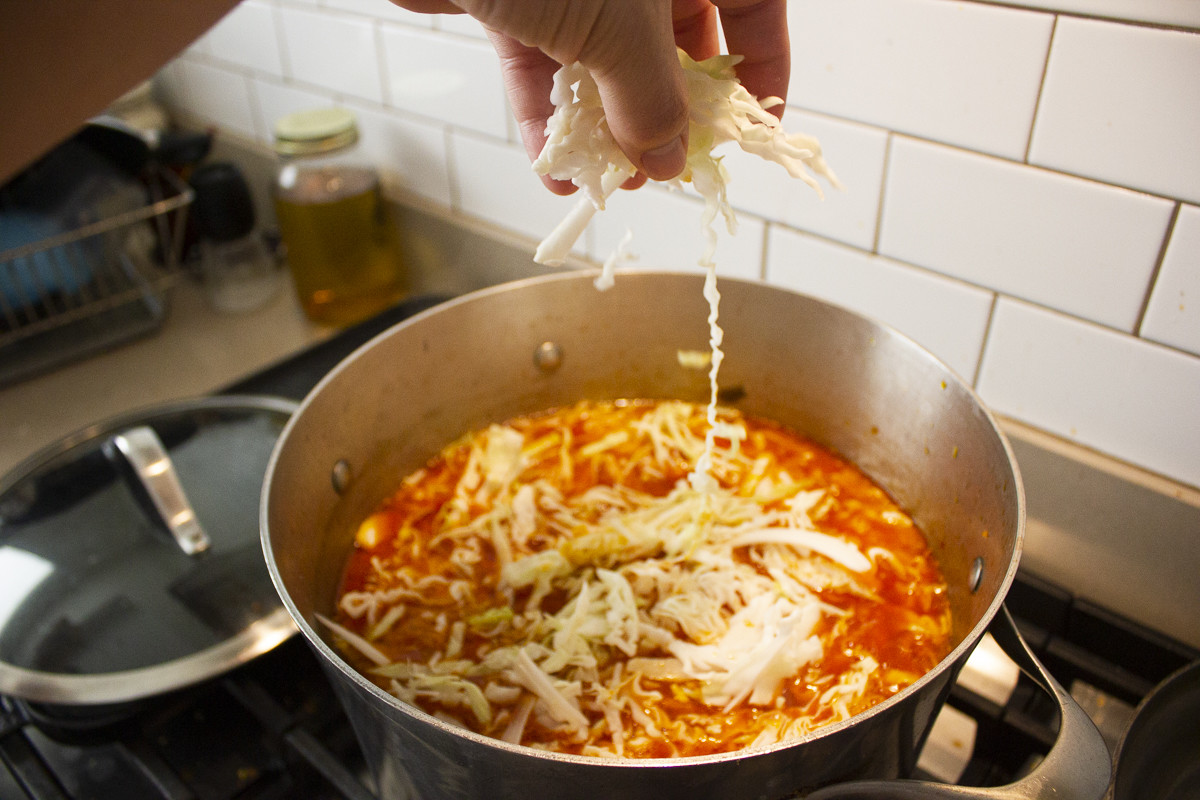 14. After all that hard work is done, you can finally feast on your borsch. And don’t forget the sour cream! 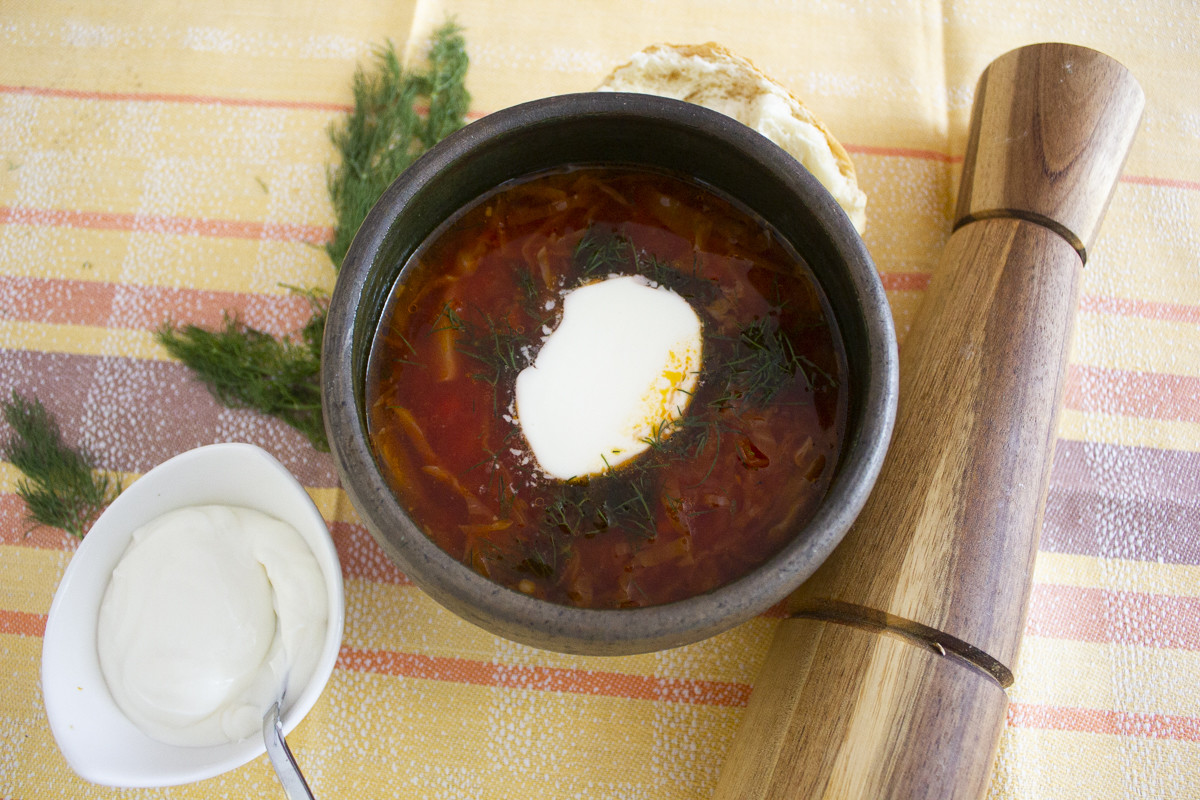 Read more: 5 reasons the Russians put sour cream on EVERYTHING