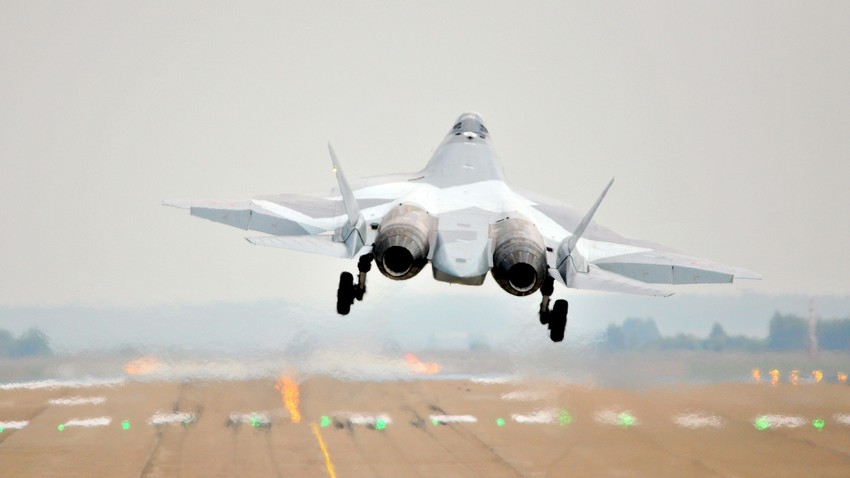 Global Look Press
Russia’s Su-57 had its baptism by fire, and will carry the country’s most modern guided missiles and bombs into battle against the Islamic State.

On the morning of Feb. 22, Russia’s fifth-generation Su-57 fighter jet joined the military campaign against terrorists in Syria.

Serving alongside other Russian, as well as American jets and bombers, Moscow’s most advanced weaponry has joined the fight against the Islamic State.

The Su-57 probably hasn’t been tasked with eradicating terrorist groups in Syria, but rather the goal is to limit their range of activity in particular regions, said Viktor Murahovsky, chief editor of the magazine, Homeland Arsenal.

“The goal of each combat mission is to use pinpoint strikes with the Su-57’s latest weaponry, and not necessarily to wipe out the terrorists,” the analyst believes.

In preparation for the operation in Syria, the Tactical Missile Armament Corporation created special types of missiles and precision guided warheads specifically for the Su-57. Russian arms manufacturers and the Defense Ministry, however, won’t reveal the exact type of new weaponry that the aircraft will use in battle, as well as the cost of fifth-generation fighter operations.

“The task now is to test them in real battle conditions, and integrate the fifth-generation fighter into the intelligence and strike forces in Syria,” the expert said.

The planes will pound targets from an elevation of at least 5,000 meters, which means they can’t be hit by the portable anti-aircraft missile systems that the terrorists have in their arsenal.

“The military will not allow a repeat of the story when the Su-25 attack aircraft was shot down by the Igla surface-to-air missile system when the plane descended to 2,000 meters in order to attack militants,” Murakhovsky said.

He said the Su-57 will probably carry out missions for two to three months.

“This is precisely the duration of a battle mission for Russian Air Force pilots. After that, the planes will return to their base, and they will be replaced by a new group of fighters and bombers,” Murakhovsky concluded.

What bombs and missiles to be used

The most modern plane should be armed with the most modern weapons. In addition to air-to-air and air-to-surface missiles, as well as a 30-mm gun, the Su-57 will have an entire range of bombs, which instead of hanging from the wings, will be hidden inside the plane in order to reduce vulnerability to enemy radar.

During the course of the Syrian campaign, the Russian Air Force has already tested a number of weapons used by fifth-generation fighters. In particular, these are the OFZAB-500 high-explosive incendiary aerial bomb, and the ODAB-500PMB volume-detonating aerial bomb, both of which are being considered for the Su-57.

The weapons tests for the Su-57 are conducted simultaneously with flight tests, and starting in 2020 the Russian Air Force will equip its planes with the most modern weapons.