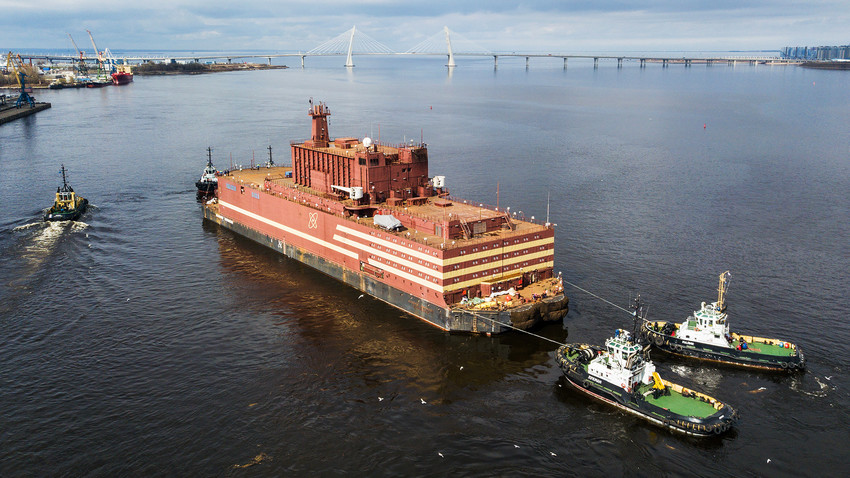 Anton Vaganov/TASS
The reactor will operate as a mobile power unit to Russia's northern regions and the Far East.

A few countries have already tried their hand at floating nuclear reactors, including China and the U.S., but Russia is currently leading the way with its 70 megawatt Akademik Lomonosov.

Built by Rosatom, the world's only floating reactor, set sail from St. Petersburg before passing Norway’s coast on the way to Murmansk, where it is to be loaded with fuel, then towed to its next destination: the autonomous region of Chukotka. It will eventually end up in the Arctic near the city of Pevek, where it will supply power to a water desalination plant and oil rigs.

Construction began in 2009, with different sources estimating the cost at around $232 million. Rosatom initially planned to refuel the reactor in St. Petersburg, but some Baltic states, along with Greenpeace, opposed the idea, so Murmansk was chosen instead. Greenpeace is worried about the dangers of a floating nuclear power plant, referring to it as a potential “nightmare” or a floating “Chernobyl”, but Rosatom insists the safety measures on the floating reactor will be next-generation, and make it virtually impervious to damage.

The Akademik has been outfitted with two KLT-40S reactors, and will generate up to 70MW of energy, which, by modern estimates, is actually very low. Some US aircraft carriers boast up to 700MW. The idea of having nuclear on water is nothing new.

The Akademik Lomonosov is set to replace the obsolete Bilibinskaya nuclear power plant and the Chunskaya hydro-electric plant, and will begin operations in 2019.

The first ever floating nuclear power station was the American-made MH-1A, decommissioned in 2014, and dating back to the 1960s. The pressurized water reactor was part of a larger group of the U.S. Army’s program, tasked with bringing energy to remote areas.