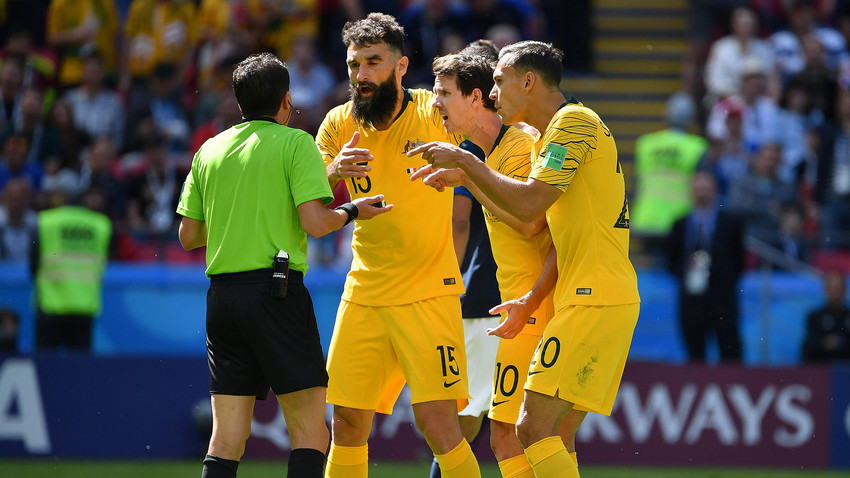 Frank Hoermann/Sven Simon/Global Look Press
In the city of Kazan, a video assistant referring system (VAR) influenced the outcome of the France vs. Australia game. This new technology sees every angle of the game at any moment, but not everyone is happy.

VAR was used for the first time at the 2018 Word Cup, awarding a penalty to France during its match against Australia. This move determined the outcome of the game.

The Group C match between Les Bleus and the Socceroos was deadlocked at 0-0 when referee Andres Cunha decided to watch the replay on the pitch-side monitor, and the technology overturned his decision. As a result, France was awarded two penalties, and it won 2-1.

VAR was also used to check Diego Costa’s first goal against Portugal, as well as in the matches Peru vs. Denmark, Sweden vs. South Korea, and Costa Rica vs. Serbia.

VAR will continue to support referees during all 64 games of the 2018 World Cup. The system can be used in four situations – after a goal has been scored, penalty decisions, red card or to confirm an identity, for example, if the wrong player was sent off the field.

The technology provides real-time video analysis using a network of 33 different cameras, including two specific smart cameras designed to detect when a player is offside. FIFA installed a single VAR operational center in Moscow, which is connected to all World Cup stadiums via fiberoptic network.

Most top refs welcome the technology. “VAR can be our best friend; it’s no longer possible to make a crucial error,” said Dutch referee Bjorn Kuipers. Some are worried, however, that VAR will dull judges' senses.

Sergey Khusainov, a Russian referee, said that the new technology is helpful but it might lead to a deterioration of judges' concentration. “When will it be decided to see a replay? This happens when the judge was late with a call,” said Khusainov.

An emerging technology made its debut at the World Cup after it was tested in the Serie A in Italy, the Bundesliga in Germany, and the FA Cup in England.