We know they move, but how do they work? St.Petersburg’s soaring drawbridges under the spotlight 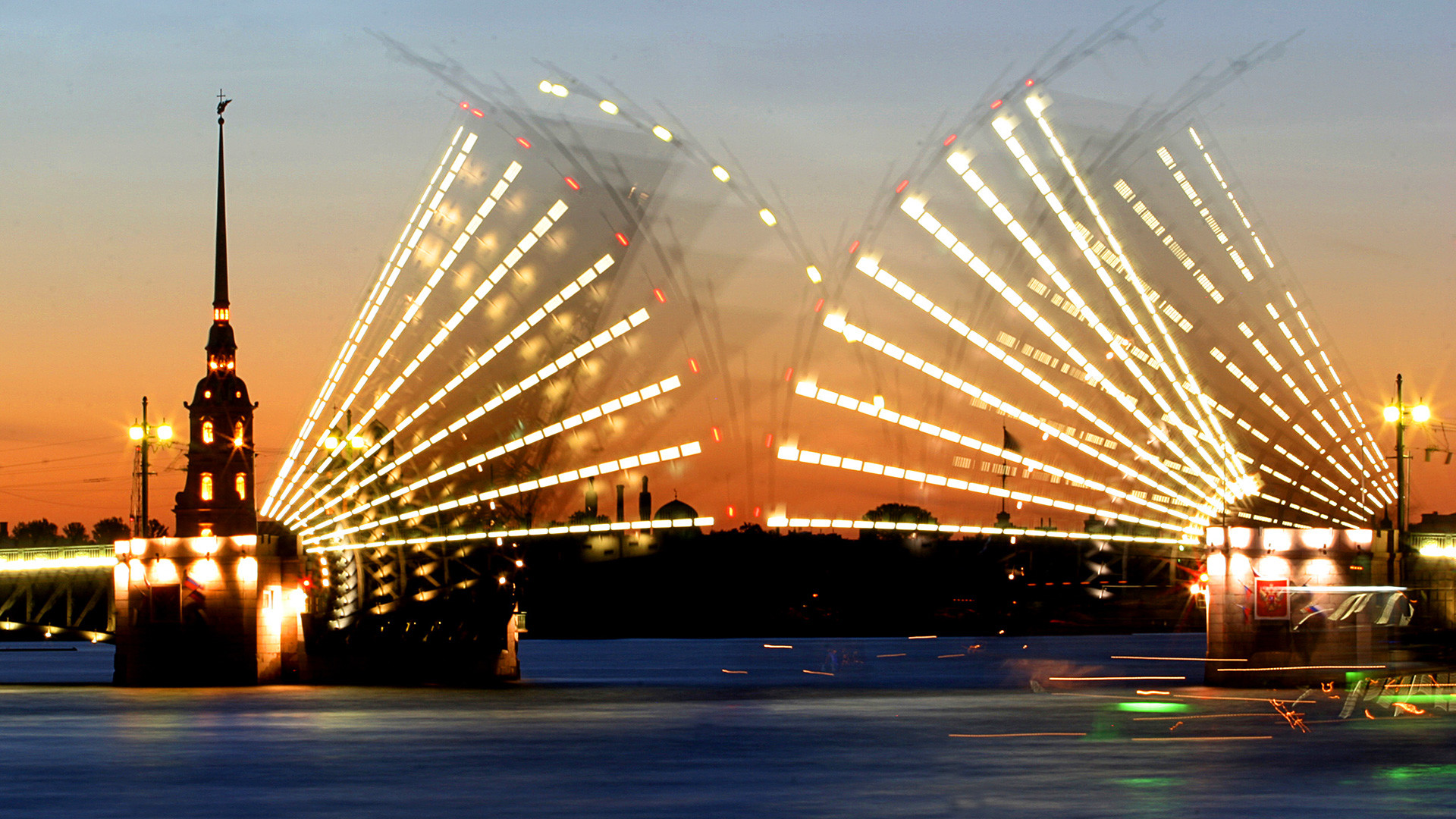 AFP
Tourists come to St. Petersburg from all over the world to see the movable bridges, a true symbol of the city. The raising process has even been turned into a musical show.

Drawbridges are one of St. Petersburg’s calling cards. Of the 342 bridges in the city, 22 are movable. And only nine get raised on a regular basis, thus attracting increased tourist attention.

You can see the whole extravaganza with your own eyes every year from April to November, but remember that the bridges are not raised if the air temperature exceeds 25 C, falls below -8 C, or if the wind speed is more than 15 meters per second, as well as on official holidays.

How St. Petersburg got its bridges

St. Petersburg was founded by Peter the Great on the Neva River in 1703. On May 27, the foundations of a fort were laid on Zayachy Island, which later became the Peter and Paul Fortress. At the same time, residential buildings were put up on the opposite side of the Neva on Gorodovy (later Berezovy) Island (today known as the Petrograd side). 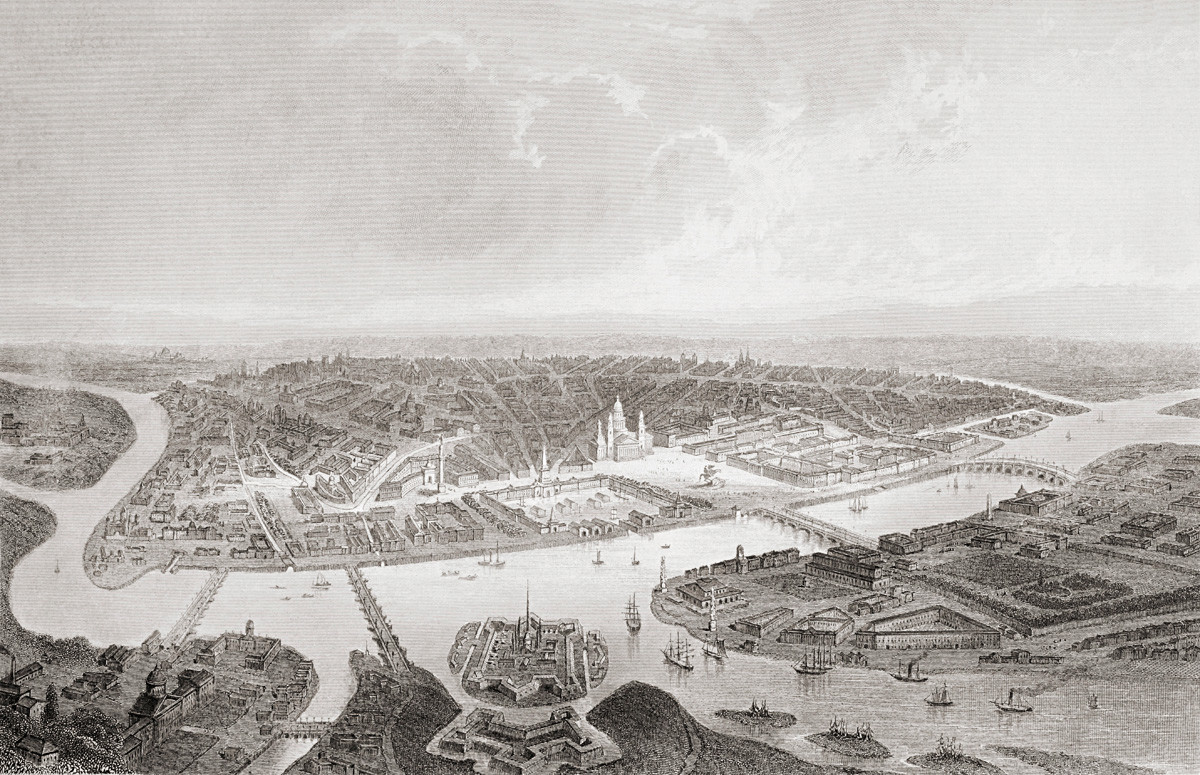 The city’s first bridge was a wooden floating structure connecting these shores. Unlike permanent bridges, floating ones were built on wooden barques (special flat-bottomed vessels) lined up in a row. The bridge, named Petrovsky, was made of timber and consisted of logs laid on barges, covered with flooring. By 1706, it had been upgraded to include two movable spans, providing additional protection for the fortress. If an enemy approached, these could be set on fire. 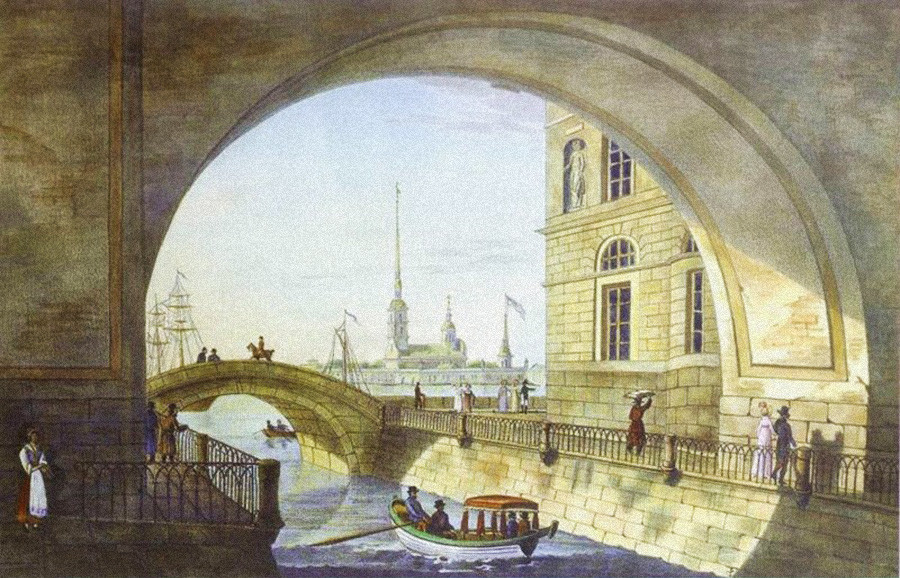 At the time of Peter the Great, bridges were literally few and far between. City residents had to cross the water on boats and ferries. In Peter’s own words, this was intended to accustom people to navigating water. Bridges were erected only in places where valuable goods were transported, and made exclusively out of wood.

Construction of stone bridges began only in the mid-18th century. The first of these was the single-span arched Hermitage Bridge across the Winter Canal. To this day, it is considered one of the finest in the whole city. 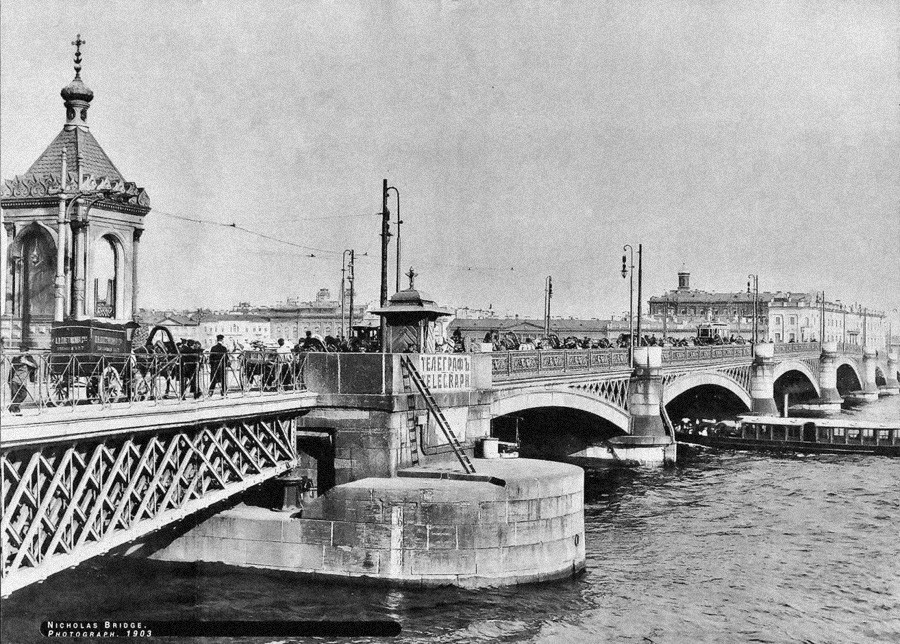 Granite eventually gave way to cast iron as the primary building material. Zelyony Bridge across the Moika River was one of the first such projects at the turn of the 19th century, and it still blends seamlessly into the elegant ensemble of Nevsky Prospect.

The first permanent drawbridge in St. Petersburg was Blagoveshchensky Bridge (called Lieutenant Schmidt Bridge from 1918 to 2007), built in the mid-19th century. Prior to that, all bridges across the Neva were the floating type, since the water depth and powerful current made it difficult and costly to build permanent viaducts over the waterway. One of the bridge’s eight spans was movable, and located on the right bank of the Neva (as viewed from Vasilyevsky Island). In the 1930s, it was transferred to the center of the bridge, where it could provide more space for passing ships. 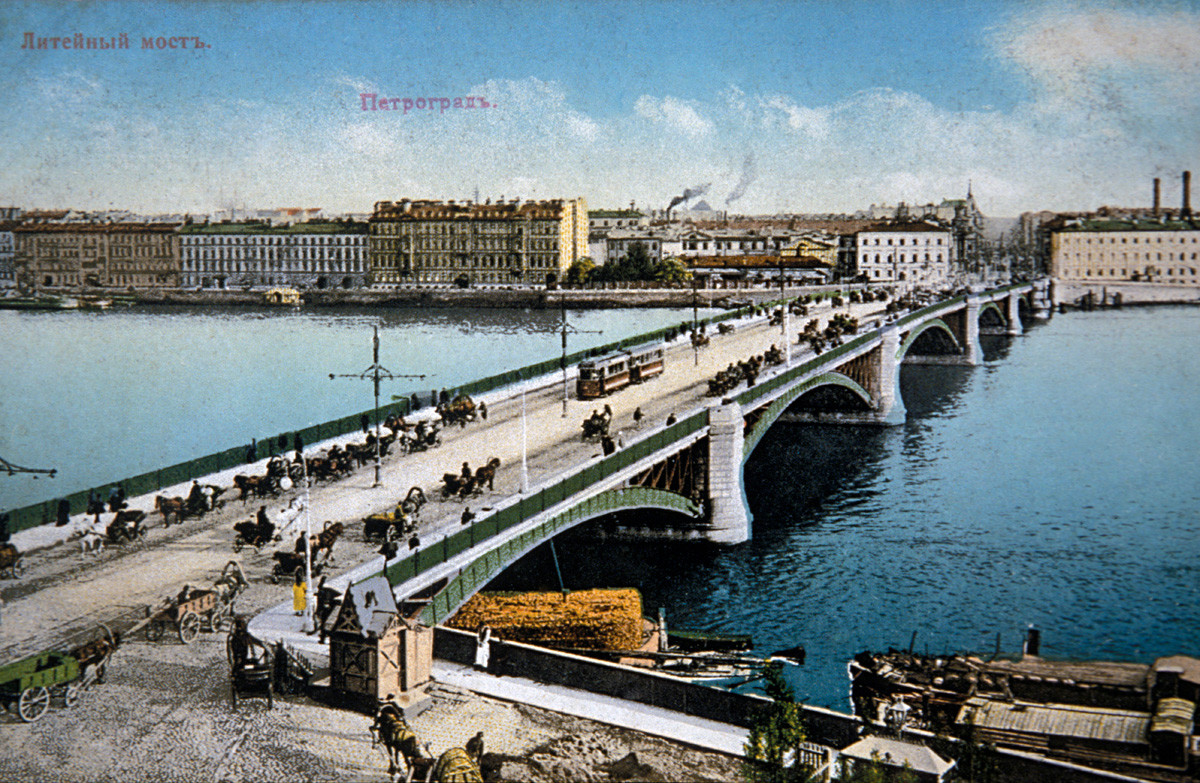 The second was Liteyny Bridge, which was built in the 19th century at the point where the Neva is at its deepest (24 meters).

How the bridges move

Each of St Petersburg’s drawbridges is movable in its own way. Some bridges are double-leaf, where the two spans are raised simultaneously. These include, for example, the iconic Palace Bridge, connecting Vasilyevsky Island to the city center. 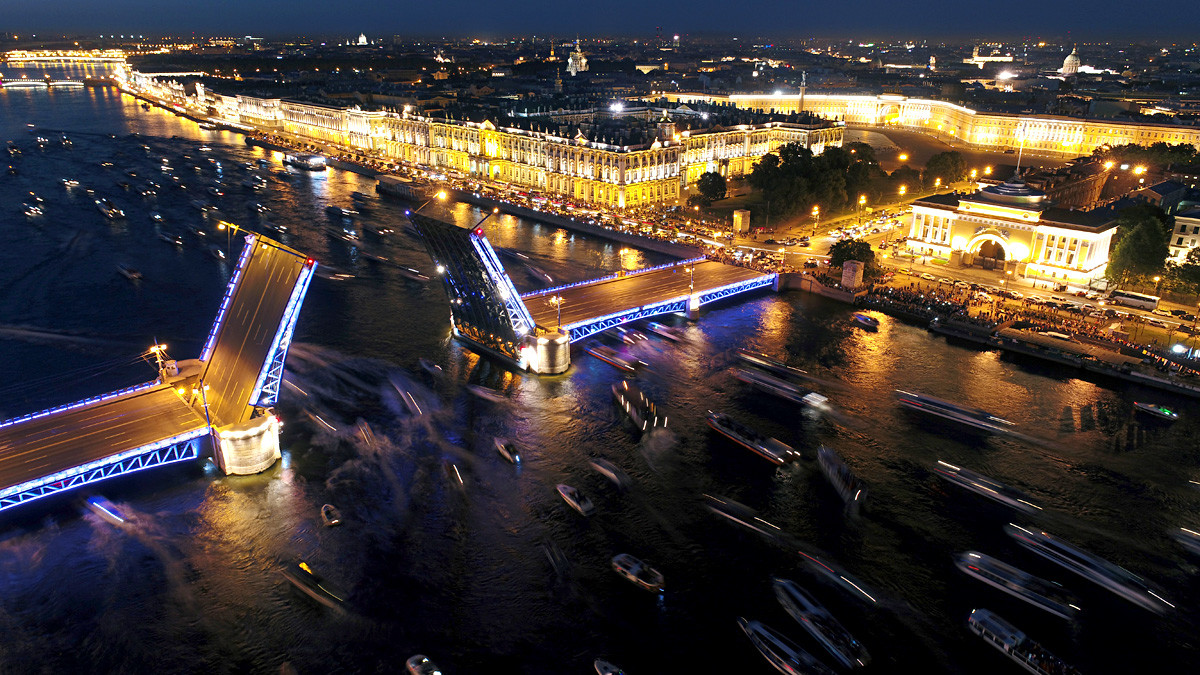 An aerial view of the raised Palace Bridge over the Neva River, the Hermitage Museum, and Palace Square.

If only one adjustable span rises, the bridge is single-leaf, such as the Troitsky, Liteyny, Grenadersky, Kantemirovsky, and Volodarsky bridges. In any case, all such bascule-type bridges open upwards, but this was not always the case: Until the middle of last century, the Liteyny and Troitsky bridges moved apart sideways. They were later reconstructed due to the increased volumes of shipping along the Neva. 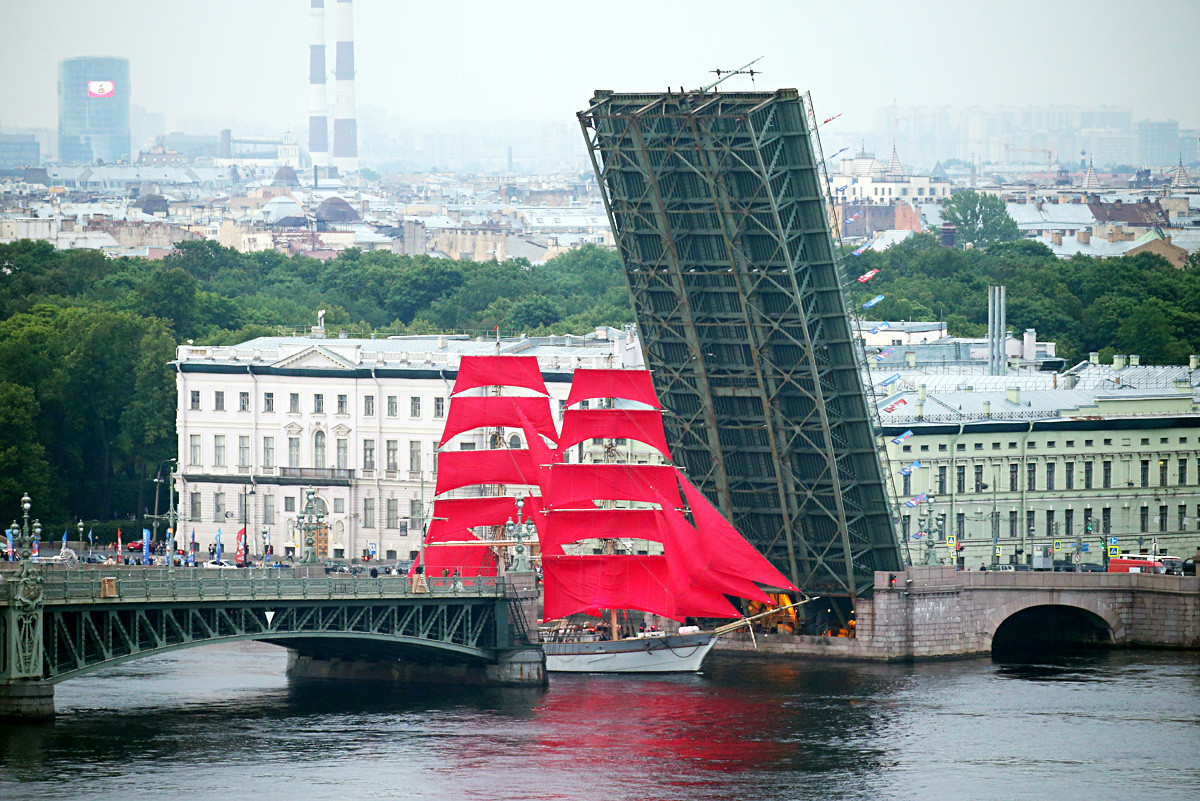 The Tre Kronor Stockholm brig sails along the Neva River during a rehearsal of the 2018 Scarlet Sails annual festival for St. Petersburg school leavers.

Most bridges are raised and lowered by means of hydraulic systems. The only exceptions are the electric-powered Sampsonievsky and Birzhevoy bridges. The latter is also unique for its rolling mechanism. After opening by 15 centimeters, the two sections roll away from each other. 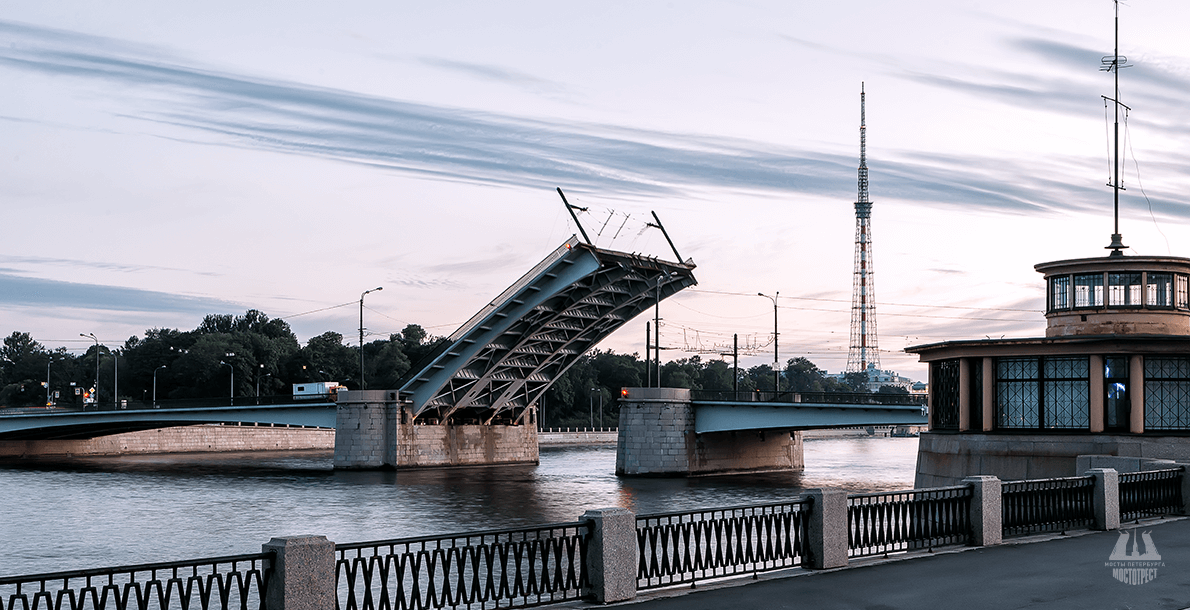 As for Grenadersky Bridge, it is unique in that it opens in three stages, with small pauses in between.

Where to view the bridges

The most romantic option is from the water, where you can not only enjoy the spectacle, but sail underneath. But before buying tickets, it’s a good idea to clarify the route, since pleasure craft cannot be in the area when heavy vessels are passing by. In such case, you will simply sit in the boat in shallow water by the Neva's granite banks – which is no different to watching from the embankment and hence not worth the money. 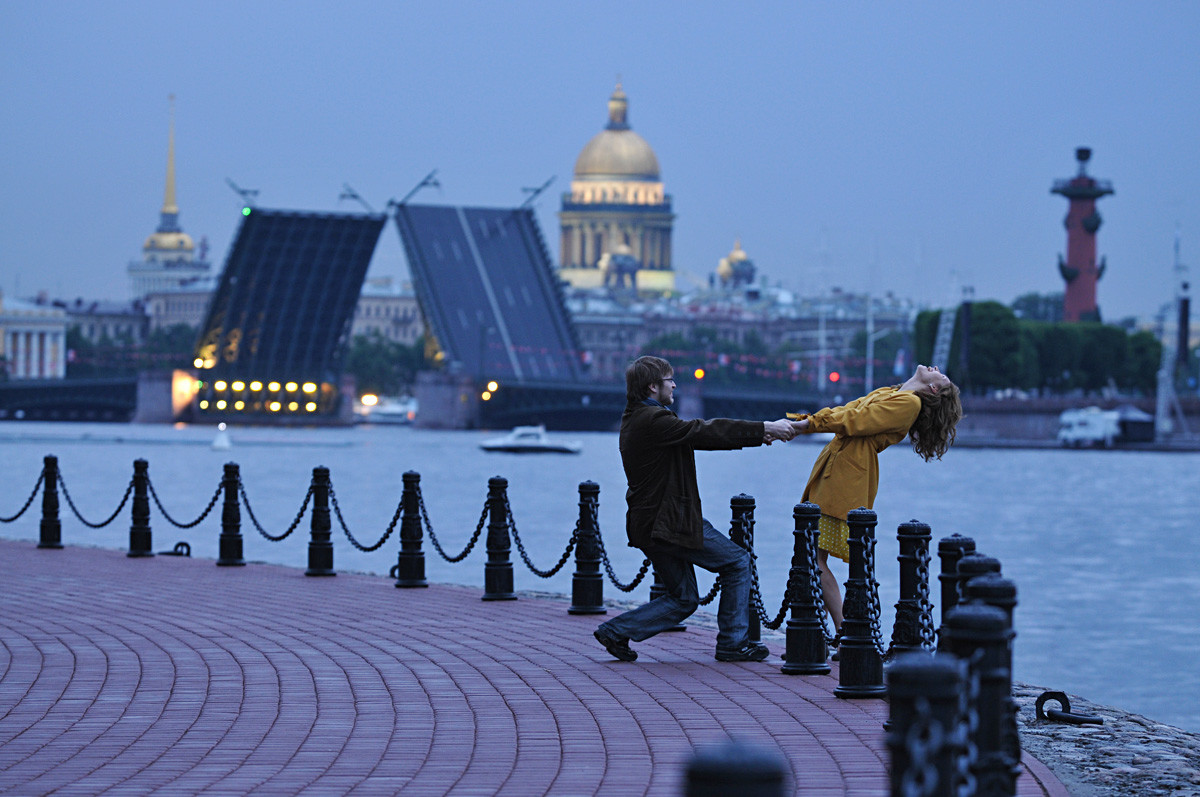 From the left bank of the Neva (from the side of Nevsky Prospect and the Hermitage), it is best to watch the raising of the bridges on Palace Embankment. From the Winter Palace to Suvorov Square, three movable bridges are clearly visible at once: Palace, Troitsky, and Birzhevoy. Here, you can also enjoy the daily “Singing Bridges” show, when Palace Bridge is raised to the accompaniment of symphonic music. 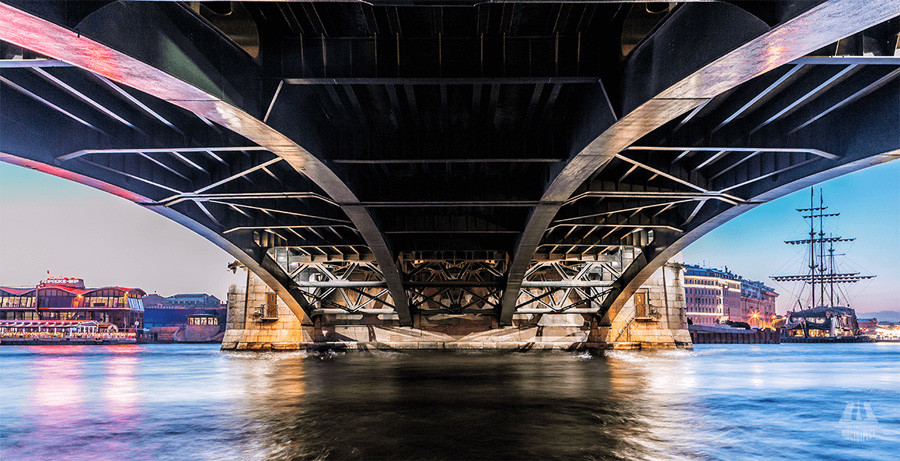 But that's not the only place in the city from where to admire the magnificent sight. Admiralty Embankment near the Bronze Horseman statue affords a splendid view of the Blagoveshchensky and Palace bridges. And from the Spit of Vasilyevsky Island architectural ensemble, you can also see Liteyny Bridge, which is located further upstream along the Neva. 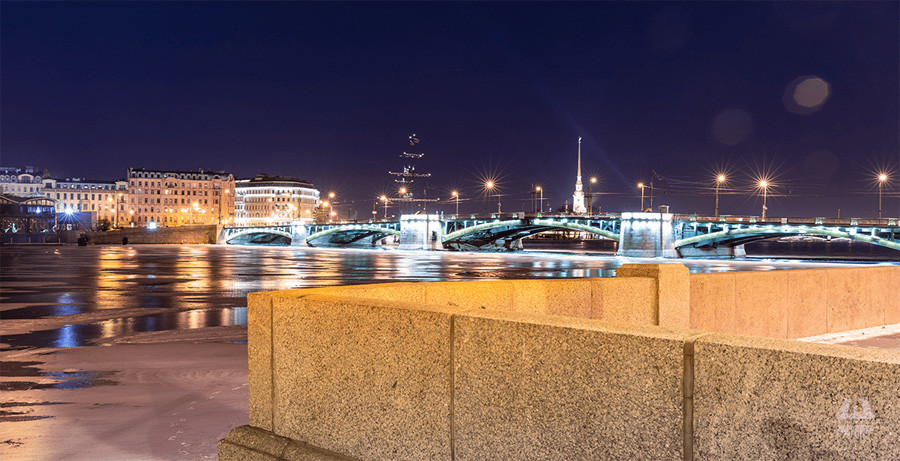 From the right bank, the best views are to be had from the cruiser Aurora (known for firing the first shot in the October Revolution) or the St Petersburg Hotel. The eye-catching event, this time courtesy of Birzhevoy Bridge, can also be witnessed from the beach of the Peter and Paul Fortress, Trinity Square, and Mytninskaya Embankment. 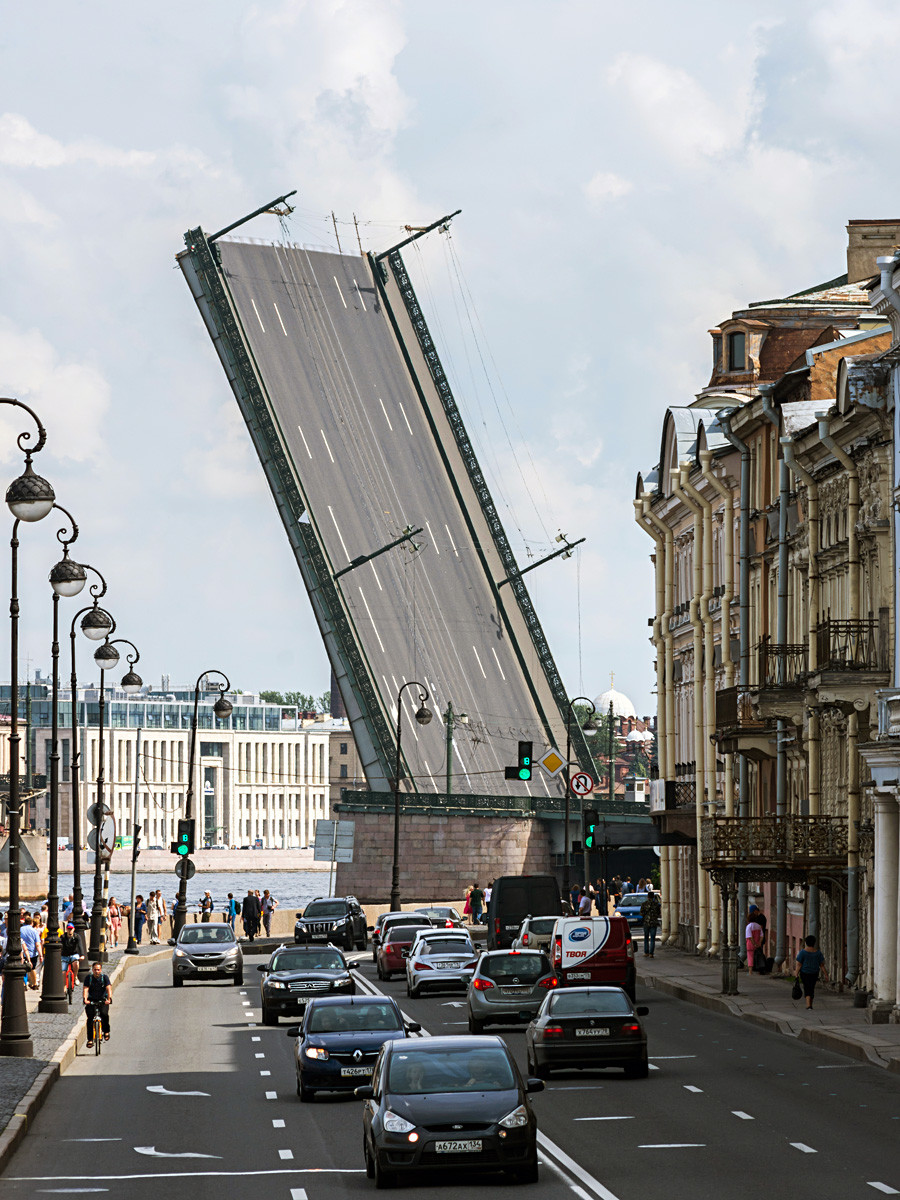 To see a bridge close up, head for Suvorov Square in the direction of Troitsky Bridge. There, you will see in detail how the 43-meter sections of the bridge rise skywards, gloriously illuminated. A similar spectacle is on show at the foot of Liteyny Bridge, viewed from Kutuzov Embankment.

For the bridge-raising schedule, including map and up-to-date changes, see this website.