Why this Ethiopian navy officer ended up as a metro driver 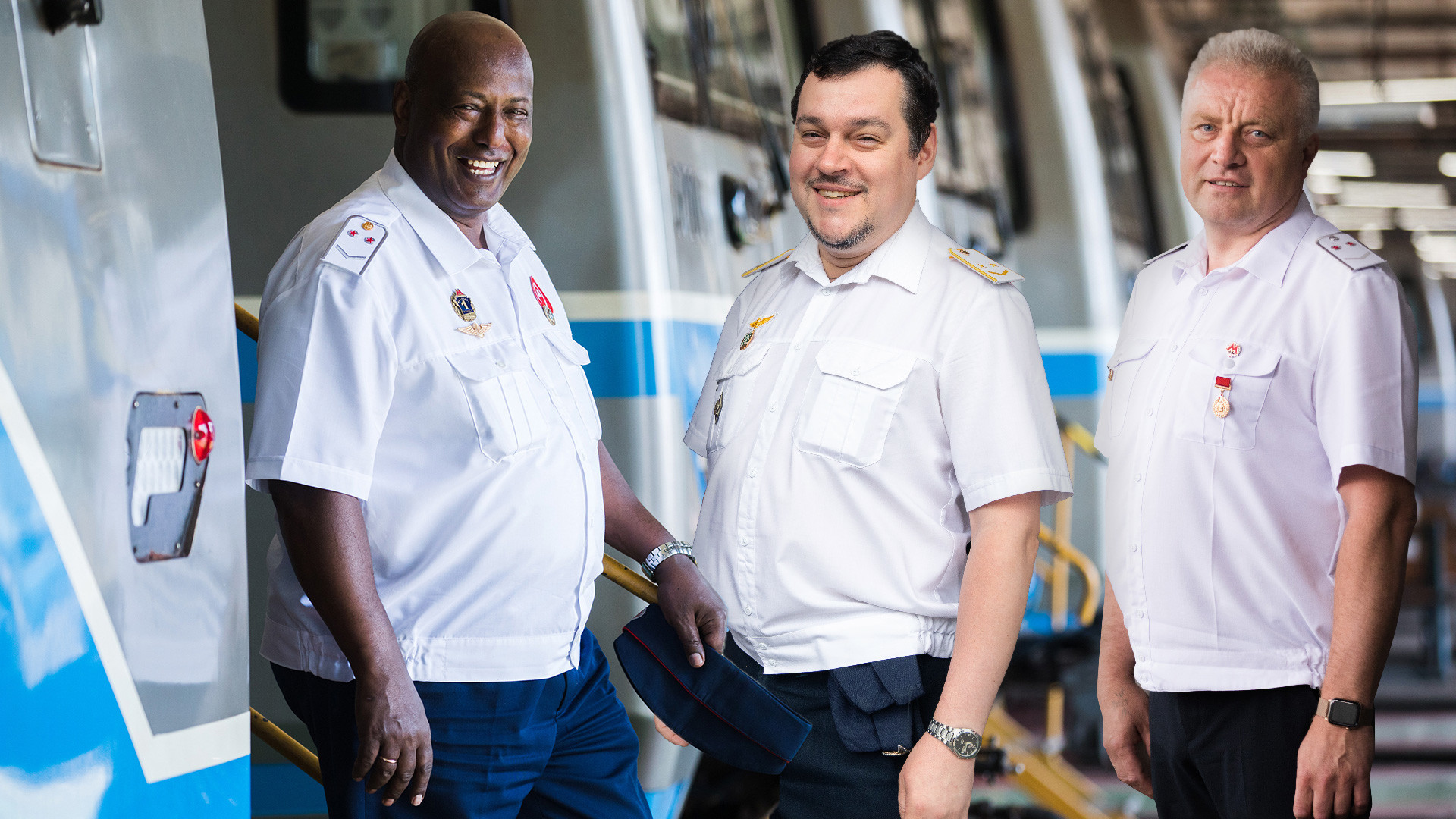 Mikhail Pochuev
We came across some unusual life stories among the Moscow Metro’s train drivers and learned what life underground is like.

'I've seen everything there is to see overground' 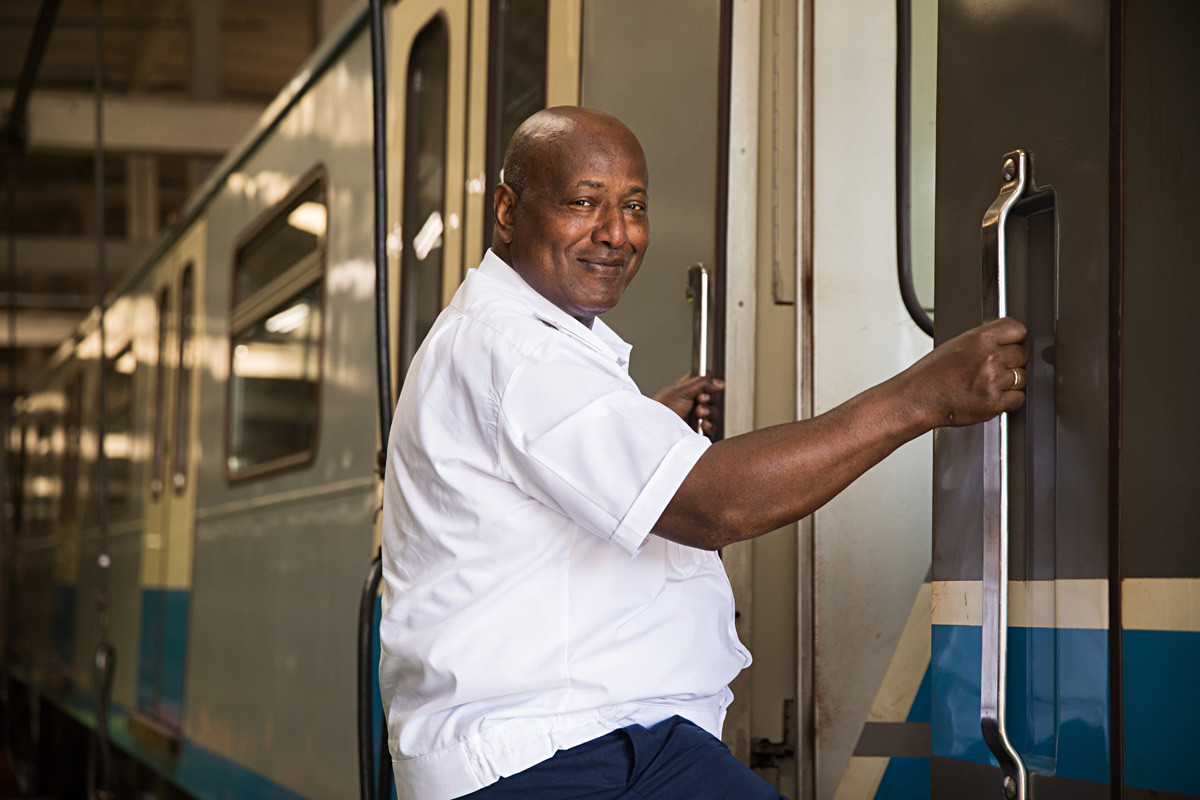 Tall, smiling Worku Bedasso is a bit of a legendary figure at the Moscow Metro. When asked how he ended up working here, he says noncommittally: "It just happened!"

In Soviet times, the young lieutenant of the Ethiopian Navy came here to study on an exchange program: first in Georgia in 1985, and a couple of years later in Azerbaijan. While Worku was learning how to build socialism, a civil war broke out in his native Ethiopia, and “old-school” officers were no longer needed by the new state. His wife and children remained in Ethiopia; they did not want to go to Russia. A few weeks later, the Soviet Union collapsed and foreign students based in Baku were sent to Moscow.

In Moscow, he was granted refugee status and issued with a work permit; however, during the 1998 economic crisis it was hard to find work. Then, his new Russian girlfriend, Olga, suggested he try working at a metro depot, since he was good with machinery. After six months of training, the former officer became a metro driver assistant.

“The first time felt strange and even scary,” Worku recalls. “But a military background helps. A metro driver needs to have stress tolerance, army discipline and a desire to work hard.”

While on the job, Worku enrolled at the Railways Institute (MIIT) to get a degree in engineering. However, it turned out that combining work and studies was too difficult and in 1999, he decided to quit the job... 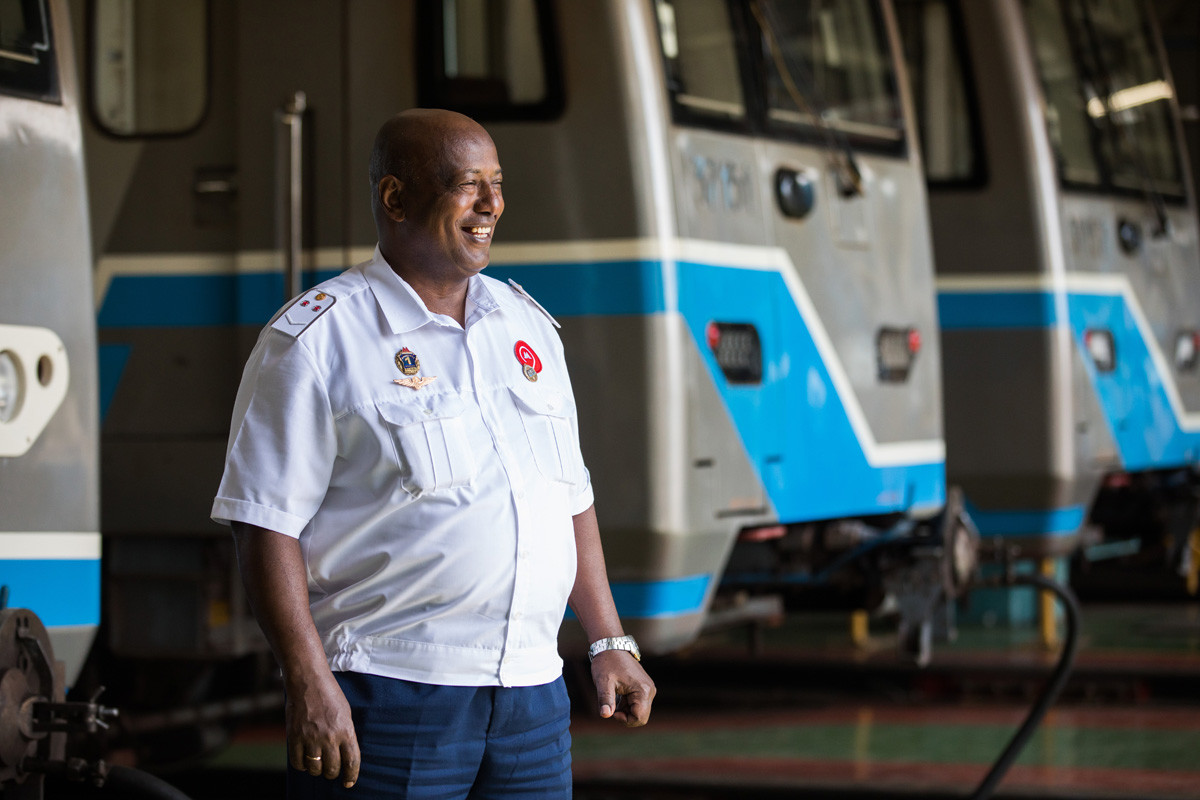 By 2010, when he had decided to return to the Moscow Metro, Worku had been working for a logistics company in Moscow and Sochi, had married Olga and received a Russian passport. He once again had to make the journey from a driver assistant to a Category 1 driver, and looking back on it today, he is quite happy with his life: “It's fun to drive a train and get good money for it.” Furthermore, in all his years of working, he has never had any accidents: he attributes it to good luck.

That said, at the age of 62, he has started to think of ending his career as a driver and move to a job at a metro depot. “When you are young, you don’t feel the workload, but at my age it’s getting a bit hard! I don’t want to part with the metro. I have seen everything there is to see overground.”

'I’ve said everything about Dostoyevsky. But I’ve loved trains since I was a kid!' 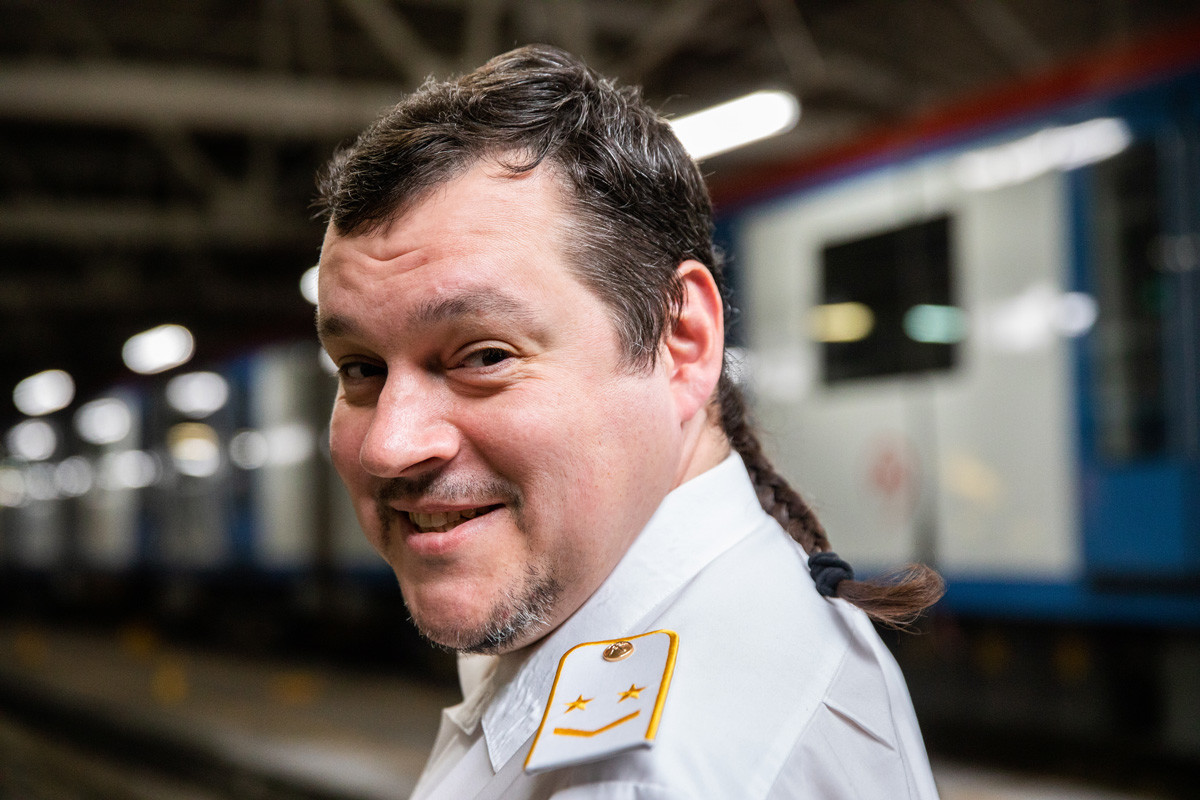 Anton Khlynin studied Russian language and literature at Moscow State University and even spent a year and a half as a PhD student. But at some point, he realized it was time to stop. Anton seems a very serious man until he turns with his back to you and you see a biker's braid popping out from under the collar of his uniform.

“At university, I had a research topic that I thought was very interesting - the perception of Dostoevsky’s works in Scandinavian countries,” - says Anton. “He is the main writer there. I took it up with great fervor, but as I was writing my thesis, I found out that this subject had already been thoroughly researched by another academic. I was extremely disappointed.”

Academia no longer appeals to Anton, although he is still interested in literature: he even writes himself, albeit articles about railways. In 2007, he decided to fulfill his childhood dream and go work as an engine driver.

“I have been a fan of railways since the age of five. My first memory is seeing a locomotive on the tracks.” 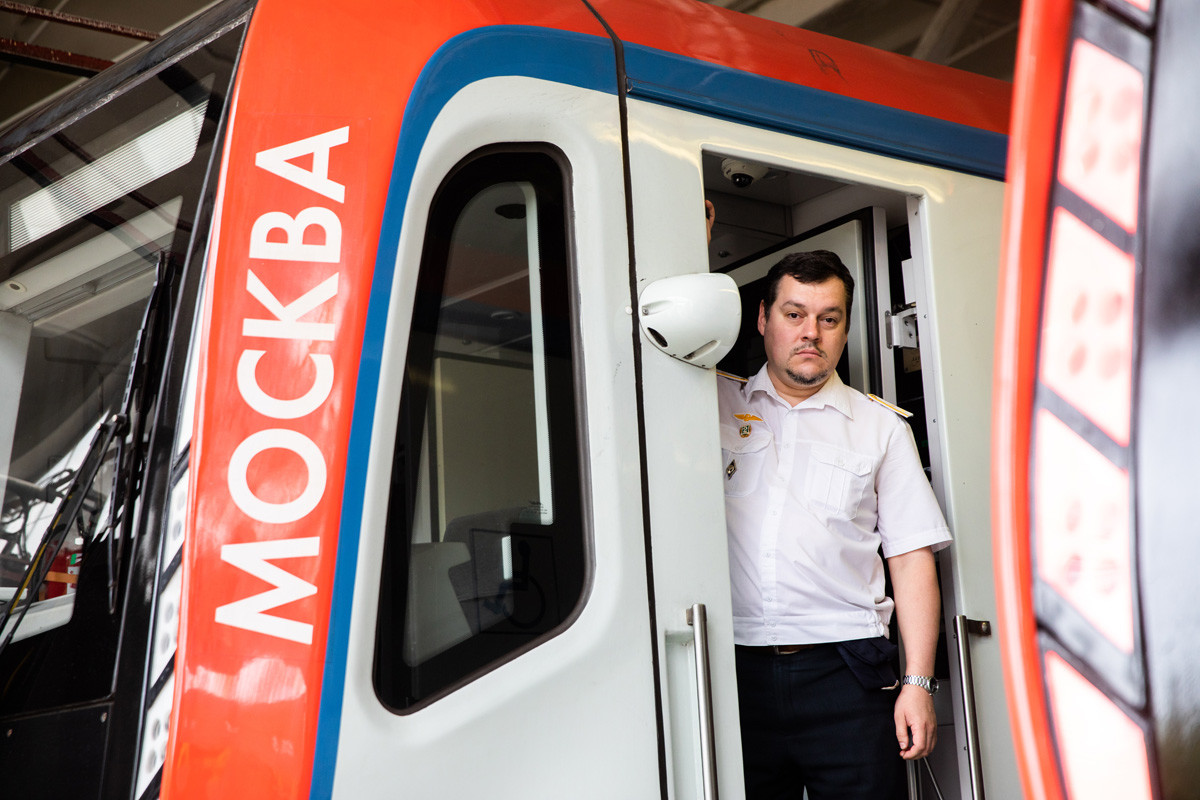 Anton is now 40 and he recently qualified as a 2nd grade driver, by coming in the top three places in a professional competition. Unlike his colleague, Worku, Anton has seen many emergency situations in his career.

“Once, a passenger fell on the tracks at Park Pobedy [station] (dark blue line), but I managed to hit the breaks in time. Also, there are diggers who are just looking for adventure,” says Anton.  “When I was a kid, I was a member of a railway modeling club, and then of a literary society. I had things to do. Whereas they, it seems, have nothing to do!"

Yet, despite everything, Anton insists he does not regret having changed his career so drastically, even though he admits seeing trains in his dreams, too. “I used to occasionally dream I was running a red light, or that my train was derailing. But now all that is gone and I sleep normally!”

When asked whether knowledge of literature helps him in his work, Anton replies philosophically: “My general level of education helps me in my life. And work is part of life.”

When you look at tall, youthful Vadim Kalugin, it is hard to believe that he is one of the oldest drivers on the Moscow Metro, a veteran of labor. Vadim is 55 years old, and he has spent most of his life underground. Now he is a 1st grade driver. He joined the Moscow Metro straight after returning from military service, on advice from his mother-in-law.

“She herself worked in the aircraft industry and knew what responsible work meant. And she liked the uniform that metro drivers had,” Vadim recalls. “By the way, we are sometimes called ‘underground pilots’. But a pilot carries 300 people on a plane, while I drive more than 2,000 people during rush hour! I think our job involves even more responsibility.” 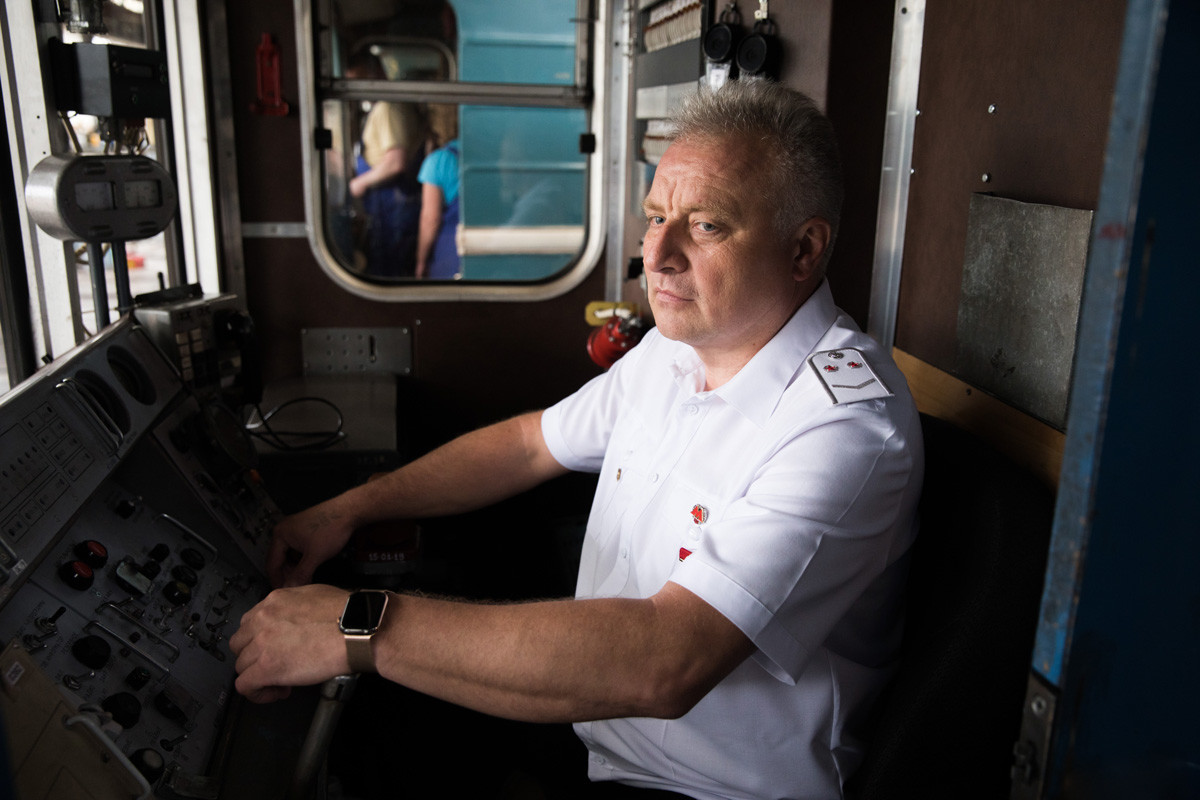 According to Vadim, the Moscow Metro is not only the most beautiful, but also the most reliable. “Even in the 1990s, during the economic crisis, when many people did not receive their wages, metro drivers were always paid on time and metro trains were on schedule. After all, if the metro stops, the whole of Moscow will stop.”

Vadim says that the main thing in his work is to strictly follow the instructions. “In the metro, everything happens at lightning speed! The driver has no right to make a mistake. In my 34 years of work, I have never had a single reprimand,” he says, adding that, sadly, he is still going to retire next year.