2 NEW armored vehicles Russian military medics will get in 2021 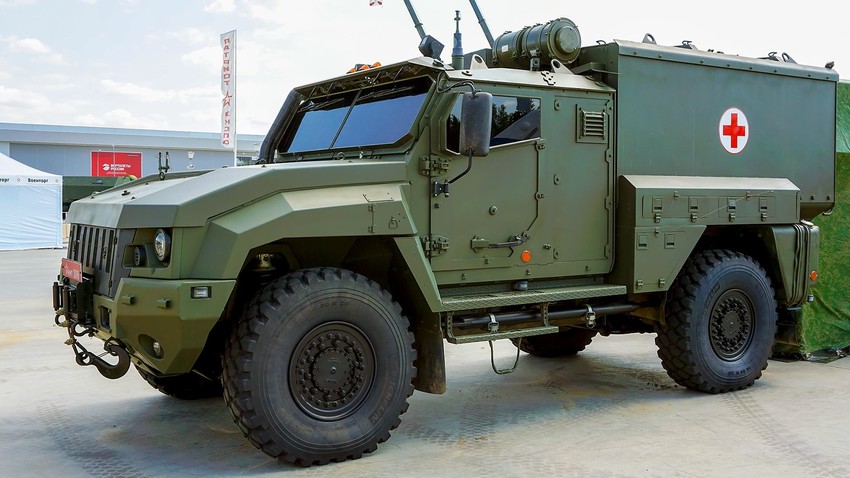 Vitaly V. Kuzmin/vitalykuzmin.net
These armored monsters can survive shots from high caliber sniper rifles and ride over mines to bring wounded soldiers from the battlefield to safety.

In 2021, military medics will begin to transfer en masse to the new ‘Lens’ medical armored vehicle. In addition to it, doctors of the Ministry of Internal Affairs have also begun to receive shipments of secret ‘Strela’ armored cars, which will be declassified to the country and the world in a couple of months during the Army-2021 weapons salon in Moscow Region. 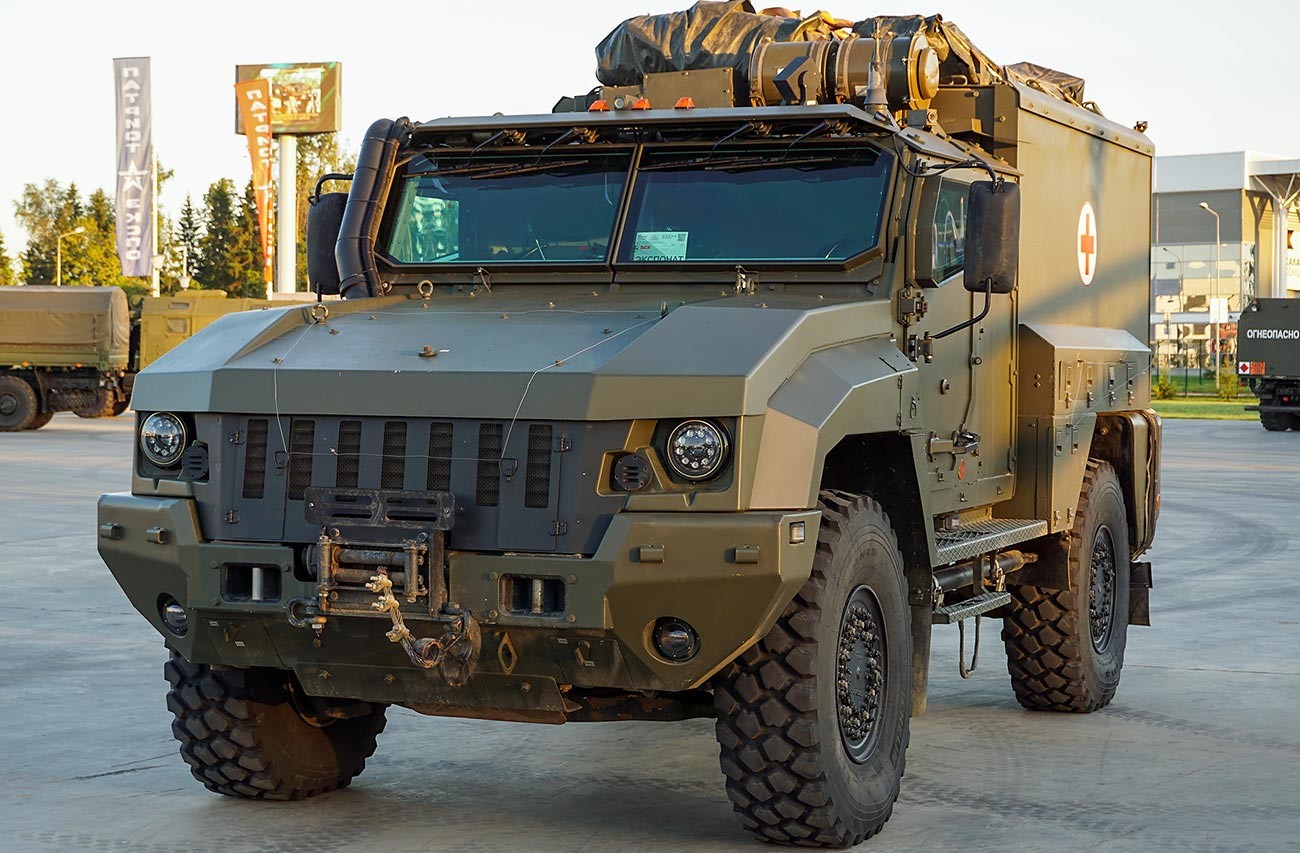 The winner of the Ministry of Defense of Russia tender for the creation of a new medical vehicle in 2016 was the company ‘Remdiesel’. The manufacturer offered a platform with a 4x4 wheel formula alongside an increased mine protection, which is already used on other military armored vehicles — the ‘Tiger’, ‘Typhoon’ and ‘Scorpion’.

“‘Lens’ was made according to a specific tactical and technical task of the Ministry of Defense together with military doctors,” says chief designer of JSC ‘Remdiesel’ Igor Zarakhovich.

‘Remdiesel’ created two versions of the armored ambulance. The first is a classic medical transporter designed to search, collect and transport wounded soldiers directly from the battlefield. The medical module has six folding seats for the wounded or space for two or four stretchers. At the same time, combined transportation is possible, when three slightly injured people are placed on folding seats on one side inside of the vehicle and two seriously injured people being transported on stretchers.

The second version is a vehicle for transporting various medical equipment, including a frame tent, and deploying a medical center at any given point.

According to the manufacturer, there are special devices for removing the wounded from the tank’s hatches, as well as shields for carrying people with spinal injuries. The ambulance is equipped with an adaptive hydropneumatic suspension for the most comfortable movement on military training grounds.

“One of the main advantages of the Lens is the circular protection of the 3rd class. The rugged armor is a legacy from the older Typhoon battle brothers Tiger and Scorpion. The ambulance armored vehicle reliably protects the crew and the wounded from small arms fire and also features enhanced mine protection. The increased ground clearance and V-shaped bottom effectively dissipate the energy of the explosion and divert the fragments to the side,” says former special operations forces sniper Ivan Saenko.

The body of the new Russian protected ambulance can withstand an explosion of a device with a capacity of up to 8 kg in TNT equivalent under any of the wheels. At the same time, the wheels of the ‘Lens’ are also armored. Even if one of them is broken, the ‘Lens’ will be able to travel at least 50 more kilometers over rough terrain. All this data was obtained as a result of numerous tests at Russian landfills, where cars were shot, blown up and drowned in water. The machines also proved themselves well in real combat conditions in Syria.

At the same time, the vehicles can not only transport people, but also allow you to install various combat equipment. These can be 30-mm cannons, anti-aircraft missile systems and grenade launchers. As a result, the units receive a protected mobile means of delivering the crew and at the same time a powerful means of fire suppression of the enemy 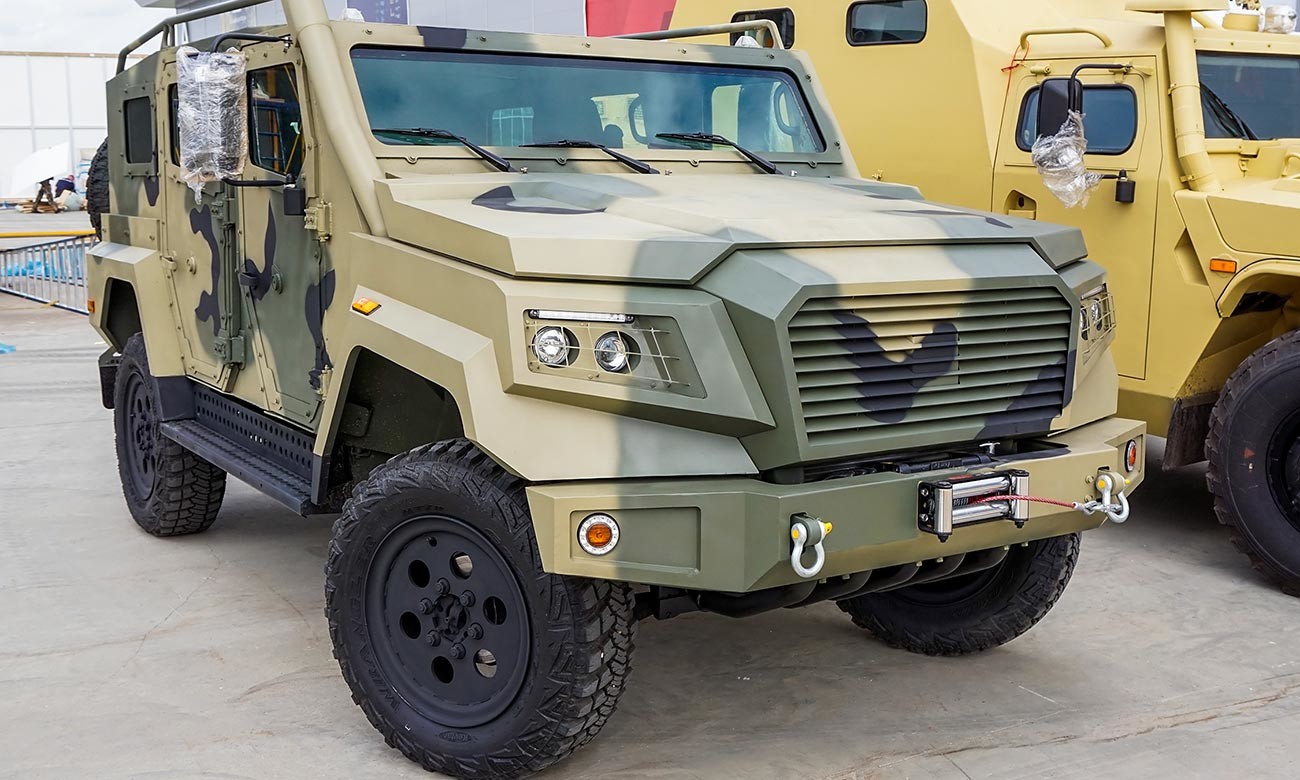 The military-Industrial company (MIC) developed the ‘Strela’ (or “Arrow”) basic armored car in just 1.5 months. Today, the ‘Arrow’ is a whole family of six vehicles, two of which represent a basic armored car and an amphibious armored car, are already ready for mass production.

The ‘Arrow’ can serve as a command vehicle, as well as a protected vehicle for transporting personnel, including medics and wounded soldiers. The car is equipped with a 200 hp diesel engine mated to a six-speed manual transmission. The specific power of the car is 42.5 hp/t, which is more than enough to perform most of the tasks. The maximum speed of the ‘Arrow’ is 155 km / h and the fuel reserve is 1,000 km.

According to the military-Industrial company, the new armored vehicle has a fairly high level of the ratio of total weight and load capacity — with a mass of 4.7 tons, it is able to carry a payload of up to 1 ton, while providing ballistic protection against small arms bullets and protection against detonation under the wheel of explosive devices with a capacity of up to 2 kg in TNT equivalent.

A distinctive feature of the ‘Arrow’ experts call the compactness and air transportability-the machine can be transferred through the air by Mi-8 helicopters on an external suspension. In the basic version, the armored car can carry up to eight people. The cabin has air conditioning, in the engine compartment — an automatic fire extinguishing system. The standard manual transmission can be replaced with an automatic one.

Due to the use of commercial components, the ‘Arrow’ turned out to be almost twice as cheap as the Tiger armored car. Thanks to the wide use in the design of components and assemblies of civil vehicles, ‘Arrows’ will be able to be serviced and, if necessary, repaired at a developed network of service stations throughout the country.