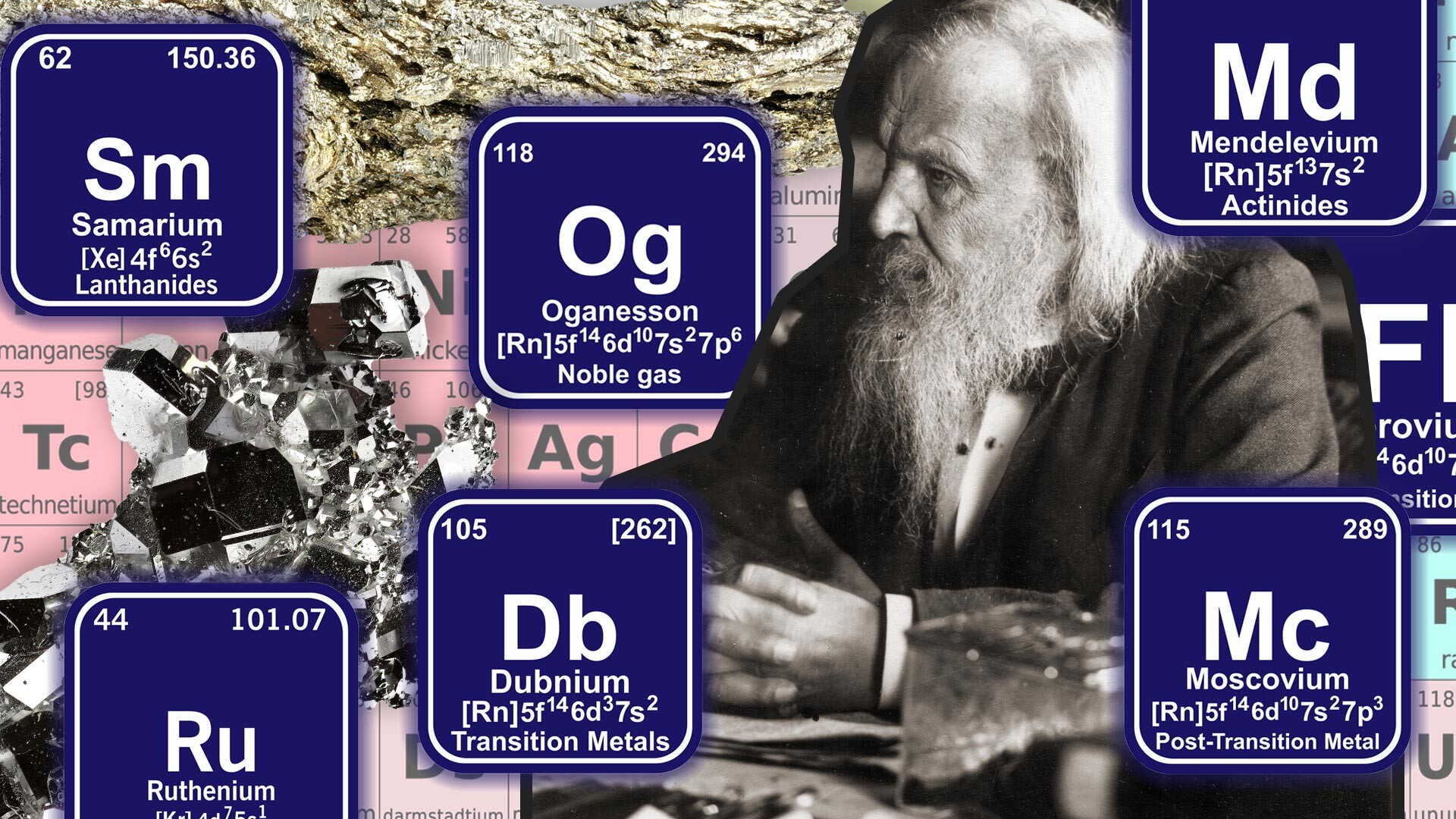 Russia Beyond (Public Domain, Legion Media, Getty Images)
The periodic table was created by Russian chemist Dmitry Mendeleev. And many new elements have links with Russia, too.

In 1869, the Russian scientist Dmitri Mendeleev discovered the periodic law, which established the dependence of the properties of the elements on their atomic nucleus. This allowed him to create a table that not only included all known chemical elements but also predicted the physical properties of yet unknown elements. All elements up to 94 (Plutonium, Pu) were found in nature, but the following ones decayed billions of years ago and now they can only be synthesized in laboratories - that’s what modern science does. Back in the last century, it was thought that there could be no more than a hundred elements, but today, there are already 118 known. Several chemical elements were named after Russian scientists and the places where they were discovered. 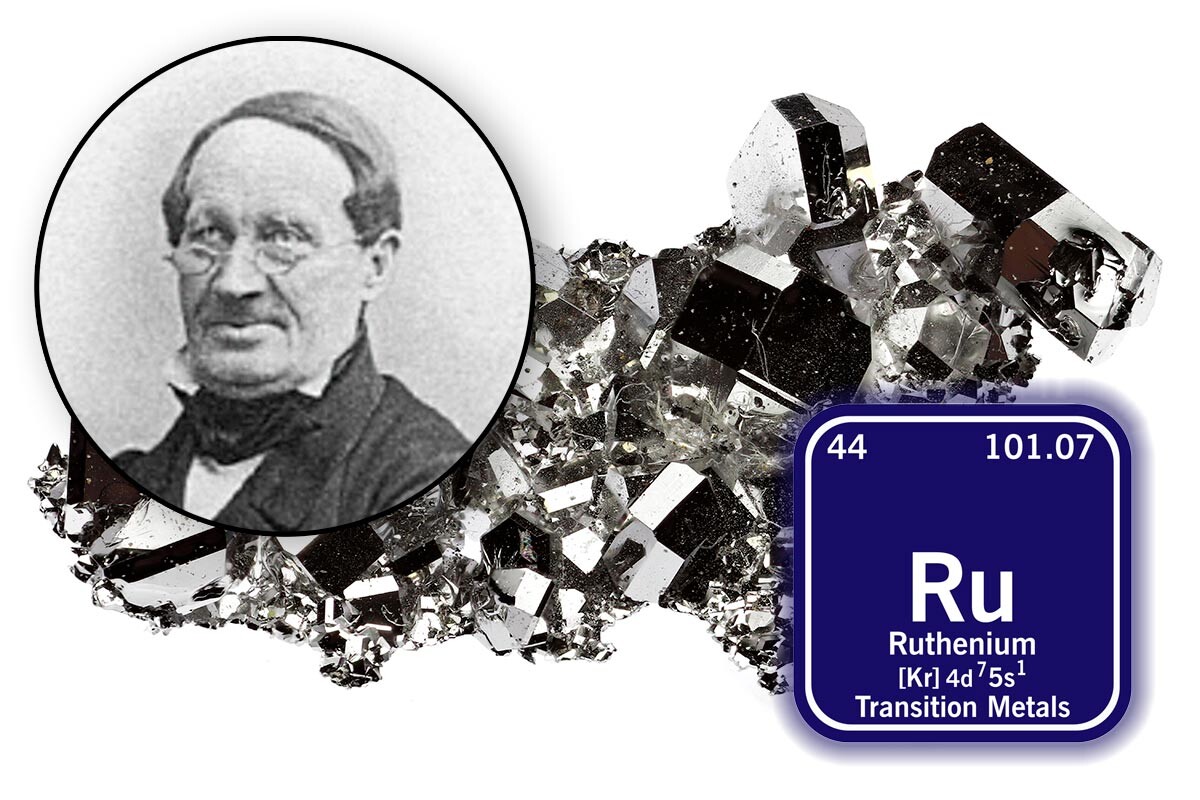 The first chemical element named after Russia can be found in the table under the number 44. It is a metal discovered in 1844 by Professor Karl Ernst Claus at the Kazan State University. Claus named it the Latin word ‘Ruthenium’ - the European name of the Eastern Slav lands in the Middle Ages.

Ruthenium is extracted from platinum ore. Today, it’s an important element in industry and its use is limited only by the small amounts in nature. For example, its alloy makes titanium corrosion-resistant, while the mix with platinum is used to make electrical contacts. Ruthenium is also used as a catalyst for water purification on orbital stations. 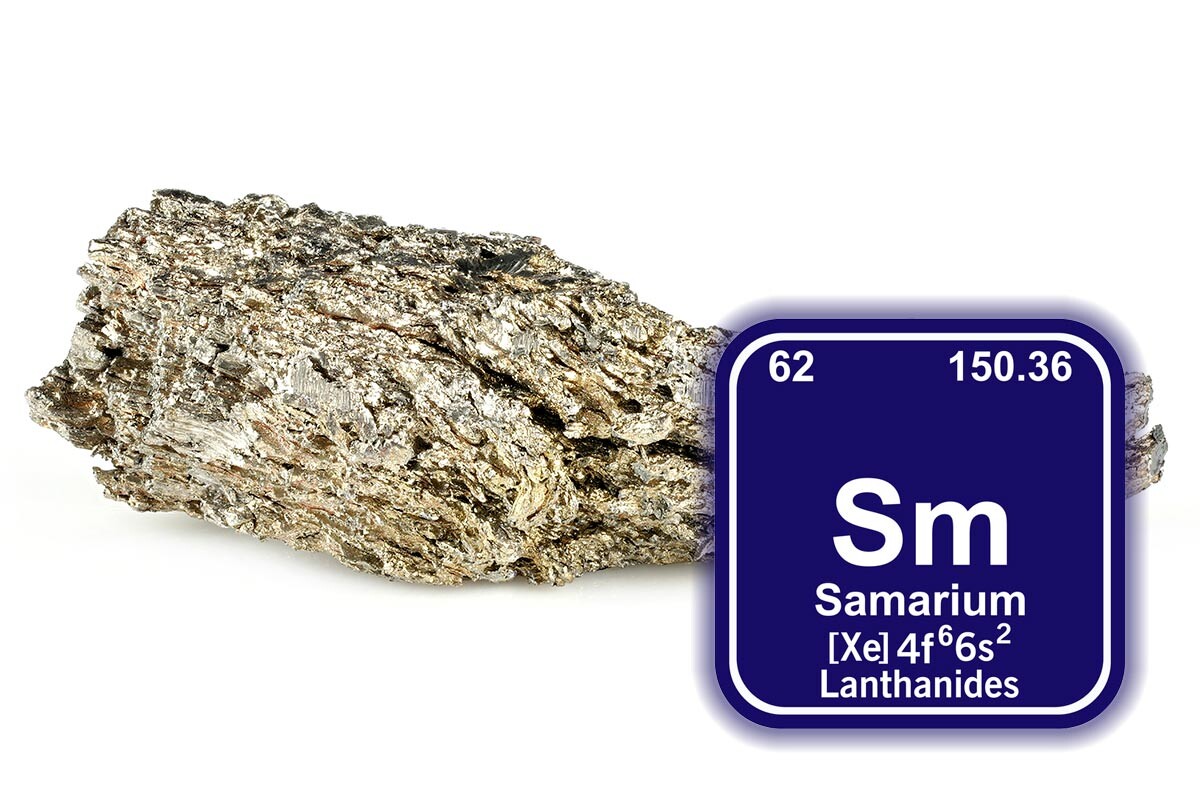 The element with the atomic number 62 received its name in honor of the mining engineer Vasily Samarsky-Bykhovets. In 1847, this Russian engineer gave a certain mineral from the Ilmensky mountains (modern Chelyabinsk Region) to the German chemist and member of the Russian Academy of Sciences Heinrich Rose for study. Rose gave it the name ‘Samarskite’ and then, in 1878-1879, chemists Marc Delafontaine and Paul-Emile Lecoq de Boisbaudran discovered in it a new chemical element, calling it ‘Samarium’.

Today, it is used for making magnets and in medicine. 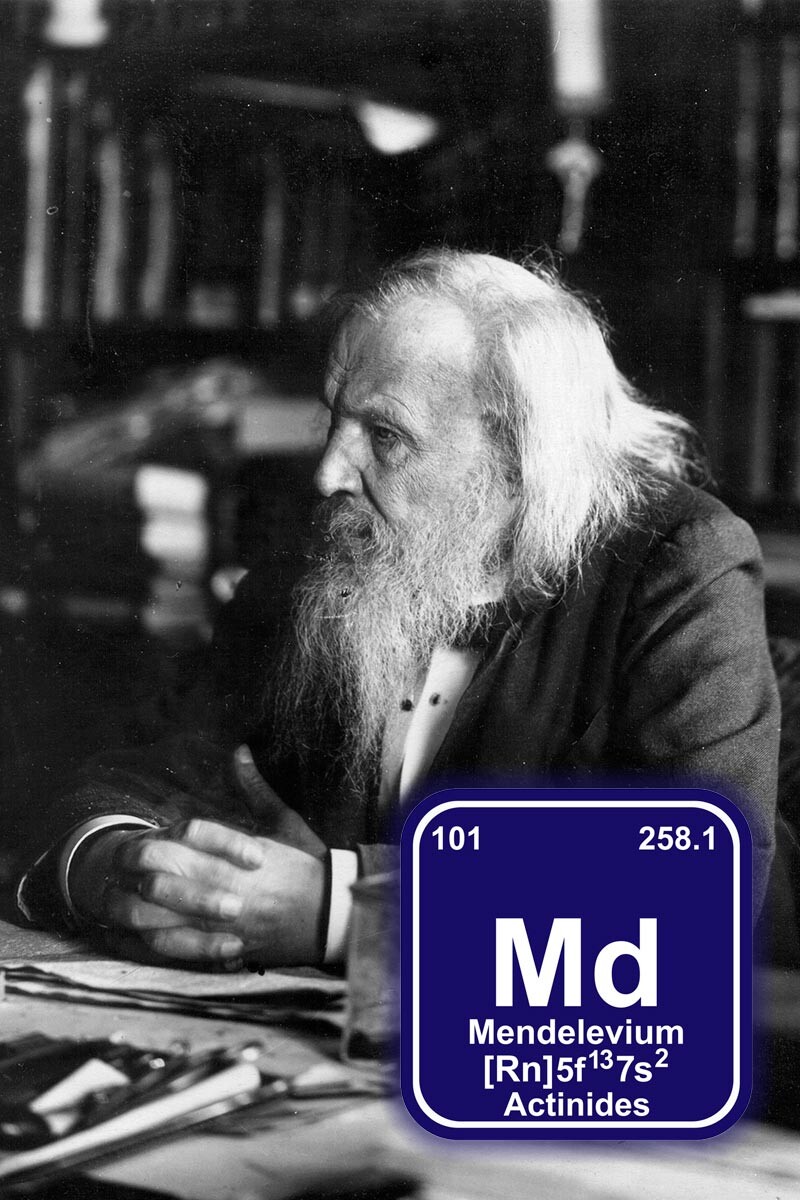 The element with the atomic number 101 is named after Dmitri Mendeleev. It was synthesized in 1955 by American scientists at the University of California, Berkeley. They suggested naming it after the creator of the periodic table. In the same year, the Commission of the International Union of Pure and Applied Chemistry (IUPAC) named element 101 ‘Mendelevium’.

It is a highly radioactive metal. So far, science knows of 17 of its isotopes with half-lives ranging from 1 hour to 51 days. It’s not yet used in practice. 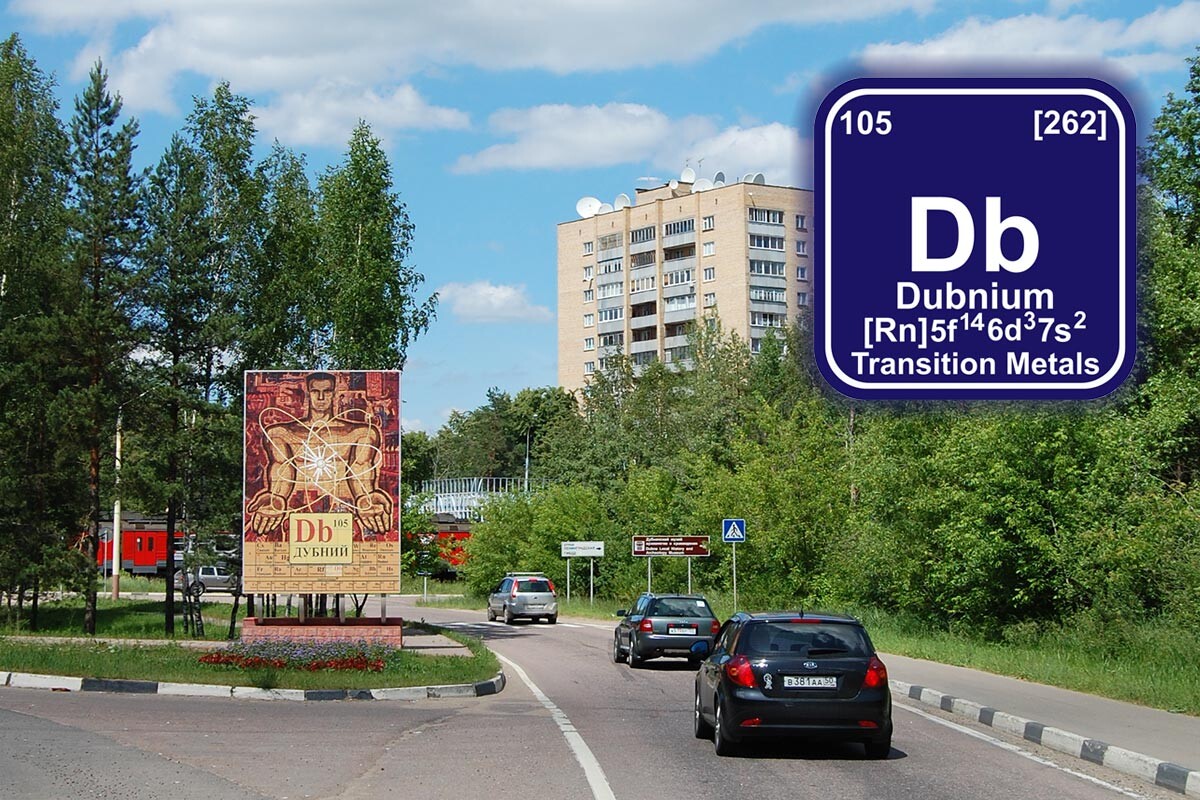 There’s a science town in Moscow Region called Dubna, where the Joint Institute for Nuclear Research is located. Since the late 1950s, this is the main center in Russia where scientists synthesize new chemical elements using nuclear reactions. The chemical element with atomic number 105 was discovered in 1970 by both Soviet scientists of JINR and American scientists of the Lawrence Berkeley Laboratory in California (in Dubna, the first results were obtained even earlier, in 1968). Both scientific centers conducted independent research. The element was also named differently: in the USSR, it was called ‘Nielsbohrium’ (Ns), in honor of the Danish physicist Niels Bohr, and, in the United States - ‘Hahnium’ (Ha), in honor of German physicist Otto Hahn. In 1994, the IUPAC Commission proposed the name ‘Joliotium’ (Jl) after the French physicist Frederic Joliot-Curie. Thus, on the Mendeleev tables of different years, one can see different names for this element. The Commission made the final decision only in 1997, naming element 105 after Dubna.

As for the element itself, it is known that it is extremely radioactive and the most stable of its isotopes has a half-life of only 28 hours. Dubnium has not yet found any practical application. 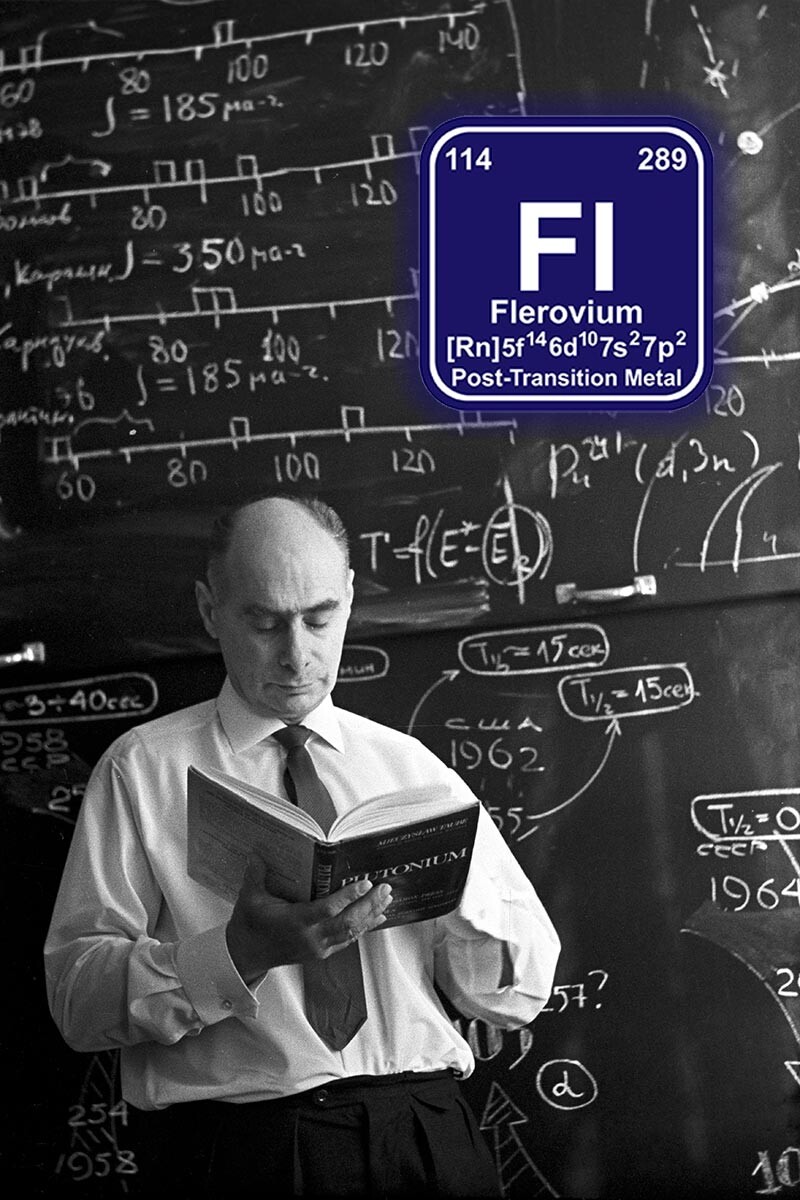 Element 114 was synthesized at Dubna in 1998 under the leadership of the outstanding (and still living) expert in experimental nuclear physics, Yuri Oganessian, with the participation of American physicists from Lawrence Livermore National Laboratory. The IUPAC commission officially approved the name of Flerovium in 2012, in honor of the founder of the Dubna laboratory, the Soviet physicist Georgy Flerov. In 1965-1974, Flerov’s team managed to synthesize elements 102-106.

Flerovium is a metal that doesn’t exist in nature (at least, for now). Its isotopes decay in a fraction of a second. However, physicists suggest that if it could be obtained in any weight quantity, it would be similar to lead in density and could become one of the most easily fusible and easy-boiling metals. 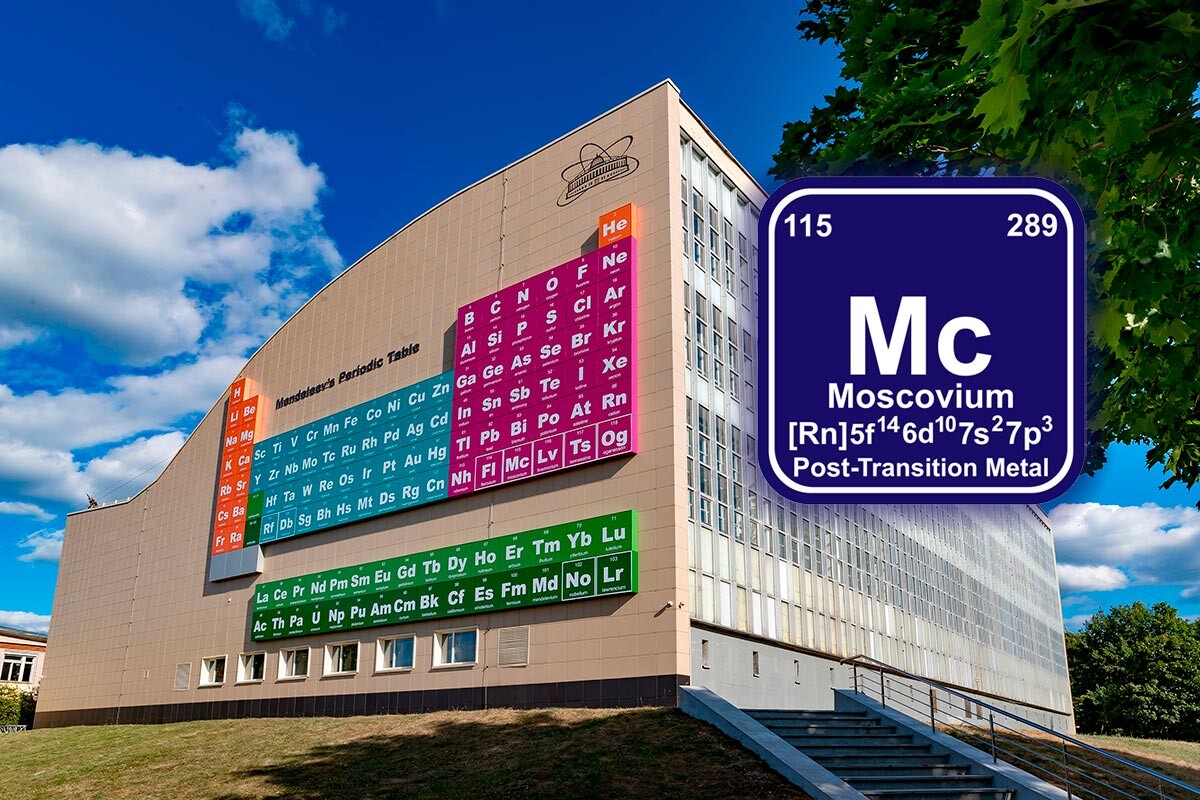 Element number 115 was synthesized in Dubna in 2003, but received international recognition only in 2015, after a series of experiments in scientific centers around the world. In 2016, the IUPAC commission officially named it ‘Moscovium’ after Moscow Region, where Dubna is located.

This superheavy element is highly radioactive and has a half-life that is measured in fractions of a second. Its properties have yet to be studied. Incidentally, Moscovium decays into Dubnium. 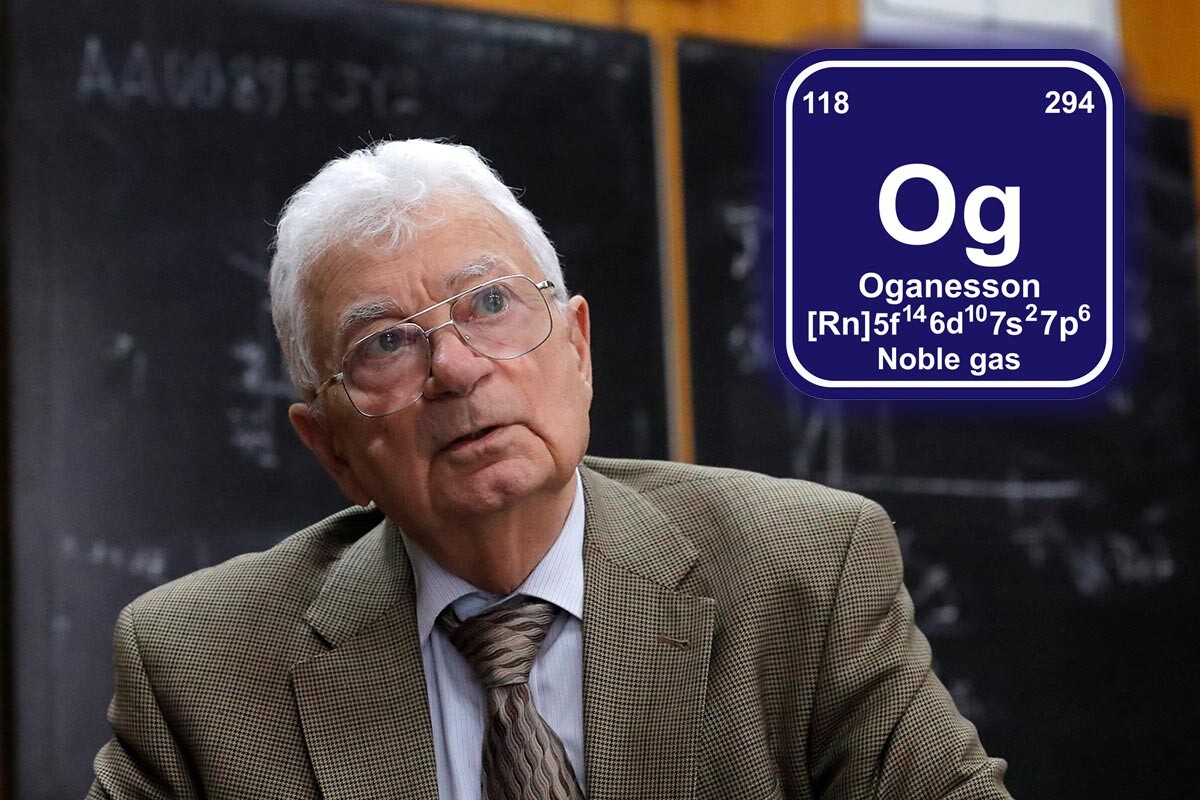 The last and heaviest among known element 118 is named after Yuri Oganessian, who led its  synthesis at Dubna in 2002, in collaboration with the Lawrence Livermore National Laboratory.

Element 118, like 115, is highly radioactive, with a half-life not exceeding a fraction of a second. Its properties are still estimated: nominally, Oganesson is a noble gas, like neon and xenon.

Scientists around the world are currently working on obtaining elements 119-126. Their existence is predicted by theoretical science, but in practice has not yet been confirmed.