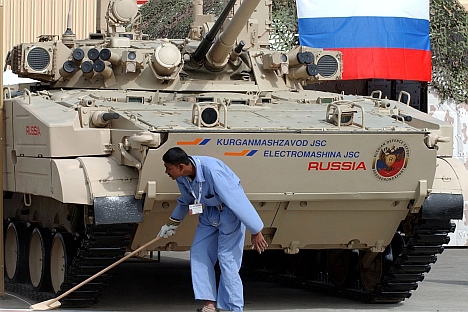 A man cleans the exhibition stand of the BMP-3 Russian tank during the opening day of the International Defence Exhibition & Conference, IDEX, in Abu Dhabi, United Arab Emirates. Source: AP

IDEX is the biggest arms exhibition in the Middle East, and it takes place once every two years. This year, 35 Russian companies presented their products at the exhibition. More than 300 specialists from various countries and nearly 15 official delegations visited the Russian stand.

IDEX is the biggest arms exhibition in the Middle East, and it takes place once every two years.

Nikolai Dimidyuk, head of Rosoboronexport’s IDEX delegation and director of special assignments for the company, told VPK Weekly about potential sales leaders, how the market reacted to Russia’s weapons and military equipment, and some aspects of how the exhibition was run

VPK Weekly: Please tell us a little about the Rosoboronexport display at IDEX 2013. What were you showing for the first time, and what were you particularly focusing on?

Nikolai Dimidyuk: Our display was based on an interactive exhibition system. We used a big panoramic screen to show not only land-based equipment but also aircraft – in total, about 20 of our most promising models. The system is based on modern Russian simulators, and we can provide very realistic modeling of various ways in which Russian equipment can be used in combat. At the same time, we displayed detailed performance data on auxiliary screens.

The main focus was on ground-based equipment. In a static display, Uralvagonzavod showed its latest developments for the first time – the modernized T90-S tank and the unique BMPT tank support fighting vehicle.

As expected, there was also a lot of interest in the Russian anti-aircraft weapons.

VPK Weekly: How is our military-equipment cooperation with the host country – the United Arab Emirates – developing?

N.D.: Things are stable. No big breakthroughs, but the work continues. There are meetings of the intergovernmental commission every year, and areas of future work are mapped out. The plan to modernize the BMP-3 is one major current project I could mention.

VPK Weekly: Have any practical steps been taken to set up a joint venture to build 30mm and 100mm shells for the BMP-3?

N.D.: We’ve had preliminary talks with Burkan – the company that has been commissioned by the Emirates. We’re ready to proceed to agreeing [on] a design specification. Work on this project is at the stage of the negotiating process.

VPK: Is there any chance of taking modern anti-aircraft weapons into the Jordanian market?

N.D.: With the big rise in the role of air-attack systems, Russian air-defense systems may definitely be of interest to the Jordanian military, especially since the kingdom has thus far been armed with Soviet systems. They have won a good reputation and are respected in the Jordanian military. What we could be talking about here is modernizing them.

VPK: Has the Hashim grenade-launcher factory in Jordan become operational yet?

N.D.: A statement on bringing the factory into operation was signed at the end of December 2012, and production of the grenade launchers will begin this year. Russia has successfully completed its part of the work on this project.

VPK: There’s been a lot of talk recently about contracts with Saudi Arabia. What’s happening with these?

N.D.: The situation in Saudi Arabia is as follows. The contracts have been discussed and virtually all of them have been initialed, but, so far, the Saudis are saying nothing. We figured they’d taken some kind of time-out. I don’t know what’s preventing a positive development of the situation, but the contracts are all drawn up. We’re waiting.

VPK: What do they cover?

N.D.: People ask me this at every exhibition. Seven years ago I ran an exhibition in Turkey. The Turkish defense minister and all his deputies were there. They had a good look at the Antei-2500 and wanted to watch it in action. We invited them. They visited the Almaz-Antei company and went to its factory.

Rosoboronexport is currently involved in a bid to supply a long-distance, anti-aircraft missile system announced by the Turkish Ministry of National Defense. A decision on this bid is expected in the next few weeks.

VPK: You’ve been to all the IDEX exhibitions. What’s your overall impression of the current exhibition?

N.D.: This is my 11th IDEX. I think it was Russia that effectively first opened up the international market for this exhibition. We brought a shipload of weapons to the first one; then, for the second [IDEX exhibition] we brought a shipload of ammunition and organized live firing demonstrations. At the first exhibition we fired every kind of weapon – from pistols, to the S-300PM anti-aircraft missile system.

As for today’s exhibition, the efforts that have been made by the Arab side are obvious. They’ve created a magnificent exhibition complex with good working conditions. Some 15-20 arms and ground-based military equipment exhibitions take place in various regions around the world, but IDEX remains the leading event. The hosts here are showing exceptional interest in the Russian display.

The crown prince, Sheikh Khalifa Bin Zayed Al Nahyan, has visited our pavilion twice and talked with Denis Manturov, the [Russian] Minister of Industry and Trade.

VPK: What other news do you have about the exhibition?

N.D.: The Emirates have asked us to leave our demonstration model of the T-90S tank for trials. Our leadership has given its consent.

VPK: What can you say about the overall impact of the exhibition?

N.D.: The exhibition has been a success. We’ve touched base with a lot of our client countries. For example, through our personal contacts we have cleared up certain issues that we had with Indonesia.

Judging by the way the market has reacted to our arms and military equipment, our priorities are still airplanes, together with helicopters and anti-aircraft defense systems. During this exhibition we’ve also realized what we have to do in the future to strengthen our marketing. And, last of all, I think our arms still need more political support.