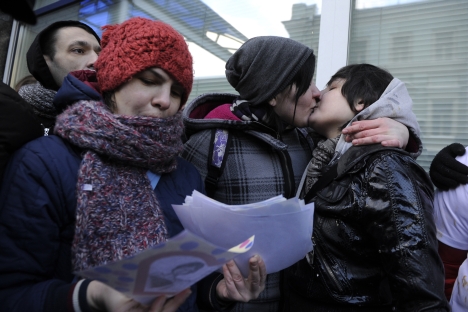 Homosexuality is described as a sin by the Russian Orthodox Church. Source: ITAR-TASS

Twenty years after legalizing homosexuality, Russian parliament is drafting a bill to ban gay propaganda. In a largely homophobic society, the anti-gay motion is driving a wedge between the pro-government grassroots and government critics, turning public attention away from more pressing problems.

Debates about gay rights in Russia have recently flared up as parliament pushed ahead with a bill introducing fines of 4,000 rubles ($130) to 500,000 rubles ($16,600) for “promoting homosexuality among underage youth.”

The bill, which was passed by members of parliament unopposed in the first reading on Jan. 25, has every chance to pass through a key second reading slated for May 25.

Russian Foreign Ministry’s commissioner for human rights, Konstantin Dolgov, has criticized the British and French parliaments for voting in favour of same-sex marriages. “This reduces the opportunity for these countries’ nationals to adopt Russian children,” Dolgov said.

Its main sponsor, MP Yelena Mizulina, has made a stand against homosexual propaganda as something that “has increased in scope” and “can affect children’s health, their moral and spiritual development.”

In an interview with the Izvestia daily, Mizulina, the head of the family affairs committee of the lower house of parliament, cited statistics of sexual abuse of children to show that pernicious effects of gay propaganda are already there.

“In 2010, 65 percent of victims were girls and 30-35 percent were boys, and late last year boys made up 60-65 percent of the victims and girls – 30-35 percent. Many specialists believe that this has to do with aggressive propaganda of homosexual behavior in Russia,” Mizulina says.

The government, she added, should take into account the public attitude toward homosexuality. “In Russia, the public is intolerant of it,” she said.

The claim is backed by opinion polls – over 60 percent of Russians say that homosexuality irritates them, while 43 percent describe homosexuality as debauchery, and 32 percent believe that it is a psychological disorder.

In his research paper “Litmus test of Russian democracy,” a renowned sociologist, Igor Kon, traced back the history of public attitudes towards homosexuality to shed some light on why Russians are generally intolerant of it.

In the Soviet Union, Kon pointed out, homosexuality was considered a mental disorder and a crime, for which one could be sentenced to up to seven years in jail. It was not until 1993 that homosexuality was decriminalized.

“This was not the result of the government’s enlightenment or mounting public pressure,” said Kon. “Gay rights organizations had no influence and the rest barely cared – it was done to gain access to the Council of Europe.”

“Gay people were made the scapegoats for all troubles in Russia, from demoralization of the army to declining birth rates,” Kon said.

In 2002, three years after Russia adopted the World Health Organization’s standards that treat homosexuality as a normal sexual orientation, MP Dmitry Rogozin (now a deputy prime minister), proposed a motion to jail gay people for up to five years. If the bill had been passed, Russia would have lost its place in the Council of Europe.

A leading force challenging gay rights is the Russian Orthodox Church, which officially describes homosexuality as a sin.

“We are against equalizing homosexual relationships and natural relationships between men and women,” Patriarch Kirill, Russian Orthodoxy’s spiritual leader, said in 2009.

Kon pointed out that Russian culture has been closed and introverted traditionally, and public champions of gay rights are very few in number. In his view, sexual minorities are of little if any interest to major political parties, and the Russian LGBT community consists of several disjointed groups and is poorly organized.

Equal rights a long way off

But no matter how little support gay people have enjoyed in Russia, their rights have never been challenged so unequivocally by the government and parliament opposition until now.

Political analysts see the bid to ban homosexual propaganda as a repercussion of growing discontent with the government among Russia’s middle class. It showed itself most explicitly a year ago, when Moscow and several other cities were hit by the biggest wave of street protests since the collapse of the Soviet Union.

“There are two main trends right now – growing protest, dissatisfaction with the regime, its waning legitimacy, and a clampdown on the regime’s opponents in response,” the head of the Levada national pollster Lev Gudkov said at the Levada annual conference in January.

“People in the government are feeling disturbed over dwindling support, and in such a state one is more likely than not to resort to repressive and primitive decisions,” says Mark Urnov, who heads the Political Behavior Department at Moscow’s Higher School of Economics.

“Having abandoned hope to win over the most progressive social groups, which demand freedom and respect for their rights, they are struggling to solidify the support they have among the larger, conservative part of society,” Urnov said.

The current anti-gay motion could be viewed in a broader context of the government’s latest initiatives, which critics say infringe on human rights. Over the past year parliament passed a string of laws, from toughening street rally regulations to banning adoptions into American homes, which prompted a wave of indignation among government critics.