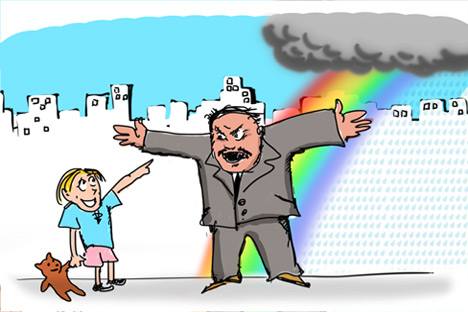 The local parliament in St. Petersburg recently adopted a controversial law imposing large fines (up to $34,000 for organizations) for the promotion of homosexuality and pedophilia among minors. What do the experts think?

After St. Petersburg Mayor Georgy Poltavchenko signed a law imposing a substantial fine for the “promotion of homosexuality,” the blogosphere exploded both in Russia and abroad. While the opponents of the law see it as a discriminatory tool restricting the rights of sexual minorities, the law’s supporters believe that this initiative will promote morality. At the same time, a number of lawyers and human right activists point out that the law is unenforceable because it does not clearly define what promotion of homosexuality is.

“The goal of the law is to announce the position of Russia’s moral majority and guard minors from bad influence of [sexual minorities]. If we live in a democratic country, it is necessary to respect the majority’s opinion. The law deals with imposing these ideas and the propaganda. [The possibility of abusing the law does exist], but it is not the reason to reject this law. Likewise, sometimes Russian police abuse traffic laws by putting road signs in some places where they are not supposed to be and, then imposing fines, but this is no reason to cancel the road regulations.”

Gulya Sultanova, an activist for the LGBT organization defending the rights of sexual minorities in St. Petersburg.

“This law doesn’t protect the underage. On the contrary, it may aggravate the problem. On the one hand, it may result in the growth of homophobia in schools and bring about the harassment of homosexual children, which could result in them committing suicide. After all, children are very sensitive. In other words, this law allows homophobes to harass sexual minorities and drive them to the edge. At the same time, the law imposes censorship: it targets not only sexual minorities but also the mass media. If a newspaper covers this issue in a wrong way, the coverage may be regarded as propaganda as well and the newspaper may have to pay fines. But the problem is that the law is very vague. Lawyers criticize it because it doesn’t give any clear definition of the promotion of homosexuality to minors. Thus, any defense in favor of sexual minorities may be seen as the propaganda.”

“First, I would like to emphasize that this law doesn’t deal with pedophilia. It’s a shift in public opinion that confuses the promotion of [legal] forms of gender behavior [homosexuality] with the criminal actions against minors [pedophilia]. If homosexuality is not outlawed by the federal legislature, I don’t see why we should adopt unclear legislation that can encompass everything from literature to movies and theatrical works as propaganda. We could compare this situation with that of the Nazis."

"Given the traditions and history of our country, we have some restrictions for this propaganda administratively. However, these restrictions shouldn’t be extended to literature and research. In other words, a legislator should understand and be cautious about imposing restrictions in this field.”

A flashmob organized by All Out, a community which brings together almost million people around the world campaigning for human rights of sexual minorities. Source: Yuotube / AllOutorg