Scientists see no threats for Earth in next 200 years 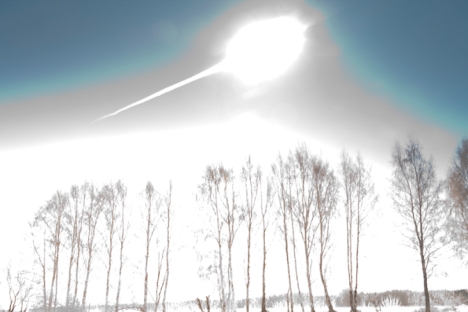 Astronomers have learned to track potentially dangerous objects that could fall to Earth from outer space, but mankind still has not invented a way to destroy larger falling heavenly bodies.

Russia Beyond the Headline (RBTH): How serious of a threat are meteors and asteroids to life on Earth? Can you talk about any of the apocalyptic scenarios, or has the threat been inflated to some extent by the media?

Bodies with a mass of more than a kilogram [2.2 pounds] can maybe reach the surface of the Earth, having already been broken up into fragments.

The larger the meteorite, the greater the kinetic energy, and the more damage it can bring. If the Tunguska meteorite had been a few hours late, it would have fallen somewhere near St. Petersburg, and perhaps it would have caused large-scale destruction.

If a very large heavenly body — about a kilometer [.6 miles] or more — fell to Earth, then it would be a disaster on a planetary scale. There is a widely discussed hypothesis that it was the fall of a meteorite in the Gulf of Mexico that led to the mass destruction of the dinosaurs millions of years ago.

A contrail is seen over the Chelyabinsk Region on Friday, Feb. 15, 2013. Source: Marat Akhmetvaleev / marateaman.livejournal.com

RBTH: Can we say that, in some areas of the Earth, the probability of a meteorite or an asteroid falling is higher than in others? Is there a safe place on the Earth, or do we have to accept the idea that something can always fall on our heads from the sky?

S.L.: The likelihood of a meteorite falling on your head is negligible. In history, there is only one case where a meteorite fell on a house. It struck the roof of the house and fell on a woman who was there. But it does not actually hurt: it had lost all its energy while crashing through the roof. The chances of getting into an [automobile] accident are disproportionately higher.

According to astronomers’ calculations, in the next century or two, none of these will cross the Earth's orbit. Apocalypse does not threaten us. But we are talking about the asteroids that we see around the Earth and which move in relatively undrawn orbits. We cannot discount that there are some comets, for example, the size of a dozen kilometers, which move in very elongated orbits; and they just have not yet been discovered and may intersect the orbit of our planet.

And, as for where the celestial body may fall, meteorite fragments are found in all continents. There are especially many in Antarctica. It’s not because they fall there more often, but because it is easier to see the dark fragments on the white ice.

RBTH: What are the best ways to track the trajectory of meteorites and asteroids? Are there now ways to intercept them or change their trajectory?

S.L.: Astronomers observe parts of the sky, and, if they see a moving object, they begin to monitor it and calculate its orbit.

But the smaller a celestial body is, the more difficult it is to detect it. However, the smaller it is, the less its potential damage is. The sooner we find a potentially dangerous object, the more time we will have to prepare and warn the population.

For this we need to invest in astronomical research. We need to create a network of small automated telescopes with a very wide field of view, to continuously monitor the sky. Such networks have already been established in the U.S., for example, and their costs are low.

But there is another problem: how to destroy these objects? We are totally unprepared for that now. It would be naive to think, here, we explode a nuclear bomb near the asteroid and solve the problem like that. These bodies, in contrast to our missiles, move at tens of kilometers per second and have monstrous masses — thousands, hundreds of thousands of tons.

There are quite a lot of nontrivial ideas — for example, as in billiards, sending a small body to the dangerous asteroid, which, having collided with it, would modify its trajectory slightly. So far, all of these are just ideas.