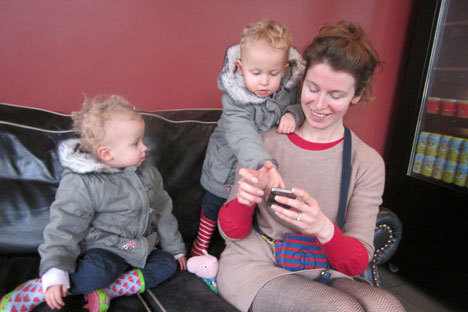 Russian expats may complain about the high cost of living in London but they find Britain’s understated charms hard to resist.

What attracts thousands of Russians to the UK each year? “Sex tourism,” jokes Natasha Semyonova-Bateman. “British men are the best – and easily available!”

Semyonova came to London from Moscow 16 years ago and started work as a headhunter. She is now running her own relocation business, capitalising on the recent influx of wealthy fellow Russians.

Estimates vary on how many hundreds of thousands of Russians live in the British capital, but most are not especially rich. For those with enough money, Chelsea and Kensington have become prime residential areas but there are plenty of Russians living in other parts of London and further afield.

Ms Semyonova lives in a small village in affluent Buckinghamshire. “My British husband dragged me there when we had our second child. It was his idea of pulling me out of the gutter,” she says.

Konstantin Pinayev, from Balashikha near Moscow, arrived seven years ago. He now lives in Islington with his wife, Natalia, and their one-year-old daughter, Isabelle. Mr Pinayev is a qualitative market researcher and his LiveJournal blog Zapiski Emigranta (An Expat’s Notes) attracts up to 100,000 readers a month.

He remembers buying the Islington house in 2008, shortly after the Lehman Brothers bankruptcy: “We were the only buyers at the time. We were walking around making these ridiculous offers, knocking tens of thousands off the asking price, then one of those offers got accepted.”

House prices may be higher than in Moscow (although in both cities they are “on the ridiculous side”), but mortgages are more easily available in Britain “You would have to pay half the cost of the house up front, plus 15 percent or 17 percent interest rate on your mortgage in Russia,” says Mr Pinayev. “I never thought about buying a place in Moscow… it’s a very British thing to do, own the land; I’ve picked that up here.”

“I’d be on a better income in Moscow – it’s the land of opportunities,” Pinayev says. “I’d have my own company and be successful, but it would come with sleepless nights and safety inspectors asking for a bribe. So my conscious choice was a steady professional career in London.”

Similarly, Semyonova feels it is “easier to find a well-paid job in Moscow. The market is still quite raw so there are plenty of opportunities… but the UK offers much more security and stability than Russia can.” She also feels there are benefits of living in Britain that are less easily quantifiable. “People smiling in the streets – you can’t put a price on that.”

A price worth paying

For parents like Darya Protopopova, the high prices of child care and housing are also worth paying. Living with her Italian husband and two-year-old twins in a three-bedroomed flat in Acton, west London, Protopopova says London housing costs a lot but at least there is “a mortgage system you can rely on.”

Pinayev says that sending his one-year-old daughter Isabelle to nursery is “both fantastic and extortionately expensive… £1,500 (about $2,300) per month if you go or not! But you can see in her face that she loves it.”

Yelena Pakhomova,who has spent four years in London working for the Russian news agency RIA Novosti, is less attached to her temporary home. “I always say I work in London; I don’t say I live here.” Like many of her fellow Russians, she is renting in South Kensington and says she and most of her friends pay more than £1,000 (about $ 1,500) a month for accommodation.

The number of Russians in the area has had a visible effect on local commerce. There are several specialist shops and cafés in Kensington, but now other businesses are catching on. “Our local florists has a special promotional offer for March 8 [International Women’s Day, a big event in Russia] with notices in Russian telling people to buy their roses,” says Pakhomova.

Pakhomova says the cost of living is higher in London. “London has the most expensive underground in the world; Moscow by comparison is free,” she says.

“It sounds like a cliché, but one of the things I miss most is snow.”

Pinayev says he has changed his view on car ownership since moving to London: “We were proper Russians and we bought a Mercedes straight away. Two months later we wanted to sell it; there is no point having a car in London… now, most days I cycle to work.”

Spontaneity seems to be a key thing people miss about life in Russia: late-night bar crawls or impromptu drinks in a friend’s kitchen. In London things tend to be planned in advance but, in cultural terms, nobody feels they are missing out.

“You can get advance tickets at Covent Garden for £10,” says Protopopova. “I go to the theatre more here now than in Moscow.”

“London is such a cosmopolitan city. I always feel Russia comes here.”