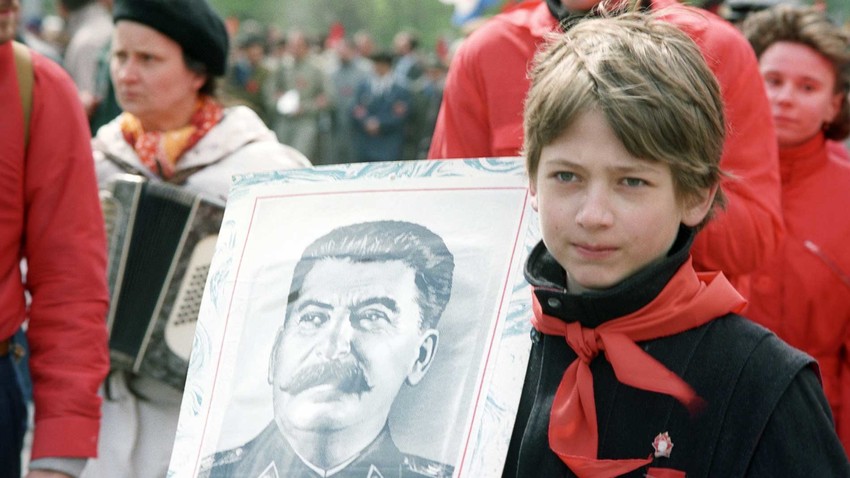 According to Russian Public Opinion Center, 27 percent of the population has a high opinion of Stalin, 6 percent rate him as a sympathetic figure, while 3 percent admire him

TASS
The first children’s book about Stalin, “Breaking Stalin’s Nose,” has been released, almost sixty years to the day since the dictator’s death. Are Russians ready to discuss this period of their country’s past with their children?

Russian émigré author Eugene Yelchin’s “Breaking Stalin’s Nose” has appeared in Russian on the eve of the 60th anniversary of Stalin’s death. The book pulls no punches about the atrocities of the Stalin era, and was awarded the Newbery Medal for the most distinguished contribution to American literature for children in 2012.

The book’s main character is a boy named Sasha who worships his father – an NKVD officer arrested by his own colleagues in the secret police. The neighbors force him out of the communal apartment, so Sasha goes to live with his aunt.

But she turns him away, fearing arrest for being connected with a son of an “enemy of the people.” At school, the other children are encouraged to inform on each other by their teacher.

The book tells of the endless arrests, the long waits to visit family members being held as political prisoners, and the grind of everyday life. Yelchin is first and foremost an illustrator, and he provided his own black-and-white retro-style pencil drawings – in a comic style – for the text.

There is a long tradition of Soviet-era literature, but this is the first attempt to talk to kids about what really happened in their own country. It’s unsurprising, then, that the book’s publication in Russia has been accompanied by a great deal of discussion.

It turns out that a novel that explains what “communal apartments” and “Young Pioneer’s neck scarves” were – or indeed, who the “Young Pioneers” were – is something Russian kids needed just as much as American kids. But the question is: at what age can we start to talk to children about Stalin and the Red Terror? And where do we begin?

This question has occupied the parents of those children who have already read the book, published by Pink Giraffe.

Their reviews and comments suggest that children aged seven years and younger are too young to deal with this theme – but leaving it until 14 is too late. By the time they are 14, teenagers are already able to read the serious literature – Shalamov and Solzhenitsyn, or Ginzburg’s “Journey into the Whirlwind.”

The young hero of “Breaking Stalin’s Nose” is eleven years old – the ideal age at which to read the book. History teachers generally agree that children should be told about Stalin at this age.

“It’s best to introduce the topic of the Red Terror to children when they are around nine or ten, and of course in a format they can deal with – not later than that, and probably not earlier,” said well-known historian and Honored Teacher of the Russian Federation Leonid Katsva.

Yelena Lobanova-Goldstein, Deputy Director of Kiev Central Library Network, said that the book “provides an ideal prompt to broach the topic of the Red Terror of the 1930s and 1940s with your child.” Even so, experts agree that simply trusting the topic of Stalin to modern parents may not be the best idea.

According to Russian Public Opinion Center statistics, 27 percent of the population has a high opinion of Stalin, 6 percent rate him as a sympathetic figure, while 3 percent admire him. Thirty percent of respondents said that they were indifferent to him.

“It’s pointless to entrust this kind of conversation to families and parents, because they are part of a generation that has not read about Stalin, does not care, or even takes a pro-Stalinist standpoint,” said Irina Shcherbakova, a representative of the Memorial Society, an historical and human rights organization whose aims include documenting events of the Repression era.

“It’s a fact that many people associate Stalin with the victory in World War II, ‘industrial accomplishments’ and the ‘strict order’ that he brought to the country,” she added.

“We really don’t need any kind of relativism when it comes to Stalin – saying that there were ‘good things about his administration too.’ We need to proceed from the basis that Stalin was thoroughly evil, just like Hitler, incapable of justification,” said Leonid Katsva.

Irina Shcherbakova confirms this view, noting that “Germans can discuss the process of history more easily, because they don’t have a positive way of looking at it. In addition to this, Germany has a well-established conversation-point about Hitler – ‘The Diary of a Young Girl’ by Anne Frank.”

Yet the question remains about how to introduce books about Russia’s political repression to children.

Reactions from children who have already read Breaking Stalin’s Nose have been nearly unanimous – the children were scared, and fearfully asked their parents “why the evil NKVD operatives had done it all?” The book prompted some anxiety in children when thinking about these events.

However, Kommersant publishing house critic Anna Narinskaya believes that the author’s intentions in the book remain unrealised. After the grim events of the arrest a phantasmagoria begins about how the nose fell off Stalin's statue, and began to live a life of its own.

Yet real life returns once more, and this discontinuity might prove tricky for young readers. Moreover, the book lacks even a single positive character, both among the boy’s neighbours and his classmates. It creates a depressing atmosphere – in a book intended for children.

“Children need either complete fantasy, like the books of Daniil Kharms, or complete reality and involvement, like Ginzburg’s Journey into the Whirlwind,” Shcherbakova adds.

The well-known poet Lev Rubinstein wrote a review of the book, which appears on the cover of the Russian edition.

“To create a book about the most agonising and haunting episodes of our own history – and to make it attractive, in uncomplicated language that even kids can read – is a task which, to be honest, very few people could manage," Rubinstein wrote. "But the author of this book has achieved that task.”

Perhaps not everyone will agree that the author of this book has fully managed it – but it is, at least, a good start.