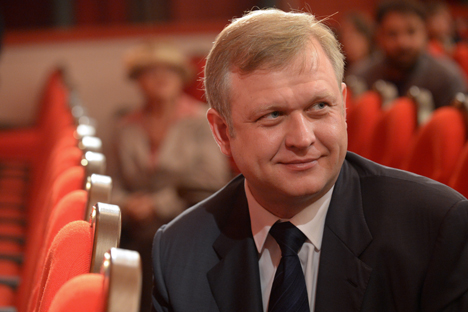 Sergey Kapkov: "St. Petersburg is a city that invented the myth about it being the cradle of Russian culture, and it has lived this myth ever since". Source: RIA Novosti

Sergey Kapkov, head of the Moscow Department of Culture, told the students of the Moscow State Institute of International Relations about the cultural crisis in Russia, bicycle tourism in the Gorky park and about the difference between Moscow and St. Petersburg

Sergey Kapkov, head of the Moscow Department of Culture, met students at the Moscow State Institute of International Relations and delivered a lecture to them: “Moscow is on Trend: From Gorky Park to the Creation of a Global Brand.” Moskovskie Novosti presents the main points of his talk.

On the cultural crisis

There is a shortage of creative people these days. There is no singer, for example, who might be regarded as the voice of this generation. In the 1970s Russians had Vysotsky, and 10 years ago it was Zemfira, but there is no one like that now.

On culture in the Soviet era

Russia has run out of people like this and its culture is dying, but of course it will re-emerge somewhere. What the country has now is a kind of cultural crisis.

Moscow spent a “Night at the Museum”

On the difference between Moscow and St. Petersburg

St. Petersburg is a city that invented the myth about it being the cradle of Russian culture, and it has lived this myth ever since. Strange though it may seem, the role of the state in culture is even greater in St. Petersburg than it is in the capital. St. Petersburg is home to the Hermitage and the Russian Museum, and it has its own fairly conservative public.

On the other hand, Moscow is now a city that is all about money and careers: people come here to get something and to make a living. Moscow has an enormous number of private organizations that can bring in anything, including the most unusual exhibitions.

Moscow is built on the principle that, ever since the days of Khrushchev and Brezhnev, residential areas have been designed for sleeping. People work in factories, and, in the evenings, they go into the city center to enjoy themselves.

In the Soviet era, the whole system was thought through right down to the smallest details. Shows started at 8 p.m. Later, the time was moved to 7 p.m., because Moscow residents were getting home too late for the flagship TV news program Vremya.

The Ministry of Culture used to be an ideological organization that prescribed all the regulations in detail. Now there is a need to create something new, but nobody has yet worked out exactly what.

Polls show that the average Moscow resident spends about 13–14 hours per week on culture – i.e., an average of two hours per day and 7 percent of their personal family budget.

At the same time, only 2 percent of resources are used for education, even though Moscow offers limitless opportunities, from language classes to art schools.

These days, the most popular places for spending leisure time are bars and restaurants; which ones a citizen goes to depends on how well off they are. Next come theatres, cinemas, etc.

Only after these do people consider courses of any kind, though the figures for cultural activity of all kinds in the capital are 2.5 times as high as those for Russia as a whole.

In Moscow, 30 percent of people have never been to the theatre, but, in other cities in Russia, the figure is 60 percent. The same situation applies with museums.

On Muscovites’ love for shopping centers

People who live in Moscow’s residential zones prefer not to spend their spare time in the city center. They prefer to travel to shopping centers outside the Moscow Ring Road, as it is more convenient.

The cinemas there have 17 screens, and Muscovites can get something to eat, stroll around the shops and so on. In other words, they can do several things in one trip.

Who is to say whether this is a bad thing or a good thing? There are many cities in the U.S. where the situation is very similar. Nevertheless, the level of culture as a measure of the relationships between people is higher in the U.S. than it is in Russia.

On the need for festivals

Moscow is currently in great need of festivals to brighten up the city and its residents. Moscow’s climate means residents constantly need something to shake them up. They need a variety of festivals that happen on a regular basis.

Unfortunately, the capital has never been a place where life is full of festivals, although there have been some successful experiences – for example, “Museum Night”, which 900,000 people attended last year. The majority of those who became involved were young people between the ages of 18 and 28.

There was nothing special about the festival, except for the fact that the museums kept working until the last visitor.

But, according to polls that were conducted, people went to meet people “like themselves” and spend time with them. Many of them became acquainted with other people in line and made new friends. “Museum Night” runs twice a year in Europe.

The challenge for Moscow is to think of something new. For example, this year the city is doing “Theatre Night.”

On European influence and examples worth emulating

Moscow is not being guided by Western experience but by foreign consultants who advise the city’s officials. To take a specific city, the experience of Berlin is of special interest to Moscow.

The city was divided in two, and, when it was reunified, it embodied two models of how to organize the urban space at the same time. Moscow is also looking at France.

This year, three bicycle festivals are being financed – the Tweed Ride, a night ride, and the traditional one that takes place in Gorky Park. As of yet, cycling is more a form of leisure in Moscow.

Bikes are not allowed on the metro, but this year an agreement has been reached with the public transport that runs on the Garden Ring road. Special places will be made for bicycles there. The idea of cycle lanes is also being actively developed.

On the Russian mentality and philosophy

Many foreign experts have repeatedly expressed the idea that the whole of the center of Moscow should be pedestrianized. At the same time, they too have recognized that, in the post-Soviet area, the car is a symbol of freedom. In the Soviet Union it was unrealistic to think of buying a car, but now it has become attainable.

In the U.S., the number of cars being purchased is falling (people there are switching to bicycles), but it keeps growing in Russia. For Russians, driving around the Garden Ring is fun. That is just our mentality.

The plan is to rebuild Luzhniki Stadium in time for the World Cup, so that the stadium (home to Spartak Moscow) can be used for it.

Will Russia do better than Europe did? In terms of money spent, Kapkov believes it will. The stadiums’ capacity will meet FIFA’s and UEFA’s requirements – 80,000 people in the Otkrytiye Arena (Spartak’s new stadium) and more than 50,000 in the others.

The article is first published in Russian inMoskovskie Novosti.