Englishman in Moscow: A British view on Gorky park and Russian soccer 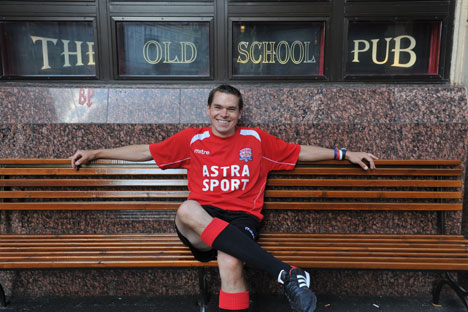 A British expat talks about the places in the Russian capital that remind him of his homeland.

English soccer academy founder Richard Pearce told Moscow News what it is about Gorky Park that reminds him of parks in Britain, why Moscow pubs have nothing in common with pubs in his homeland, and what makes Russian soccer fans different from British fans.

“I was born in a small town in England called Solihull, but most of my life I’ve lived in Manchester. When I was just three years old I started saying, ‘I’m going away to live in Russia,’ and all through my childhood I talked about Russia and studied its history and culture. I had this inexplicable dream. And, when I was 25, I went to Vladivostok. Then I traveled across Russia, teaching, doing various projects and running in charity marathons for Russian orphans. And now I’ve settled in Moscow and created the project of my dreams — a football academy.”

“Moscow is a crossroads where Western and Russian life meet. I feel comfortable here; but, even so, it’s not 100-percent Russia. I can only really get a sense of Russia when I travel outside the capital.”

“It’s a bit difficult to compare Manchester with Moscow: The city is considerably smaller, the center is much more compact and everything’s concentrated in just a few areas. It’s easier to compare the scale of Moscow with London. Apart from the fact that both these cities are capitals, I know that they have something else in common: There are lots of Russians in both of them.”

“I can confidently say that Moscow reminds me of England only rarely and only in a few places. For example, the Krylatskoye area seems to me to be very similar to the Crystal Palace area of London, where there are lots of houses alongside parks and natural environment.”

“Gorky Park is similar to lots of British parks that I’ve seen — but not Hyde Park. Gorky Park has the same kind of relaxed atmosphere, with people all enjoying life in their own way.”

“When I was in Manchester, I lived on the edge of the city, and so I had lots of open spaces to run in. Here, I’ve settled in the west of Moscow — not very close to the center, but I can always go running, as is my habit. I run past Luzhniki [stadium], on the Sparrow Hills. There’s also a forest not far from where I live. I run there and I remember the wonderful nature in Britain.”

“Many foreigners associate Britain with the word ‘pub.’ And we really do love our pubs. You used to be able to smoke in pubs in Britain, but now it’s banned, so they’ve lost a bit of their atmosphere, although not all of it: People still play darts there, and they’re all very friendly, and you can go and sit down with anyone and start talking to them as if they were an old friend.”

“Unlike bars, you can still get cheap beer in pubs, and they don’t have loud music. In Moscow, I’ve only come across one authentic pub — Booze Bub — which I liked. Moscow has lots of bars and pubs that try to be like British ones, but I wouldn’t call them real pubs. Everything’s a bit artificial. All those bars on the Arbat are nothing like what I’m used to in Britain. Incidentally, I’ve yet to find anywhere in Moscow where they serve real fish and chips.”

“I’m a big fan of football. And now football is my business too. If I’m not coaching the kids at the weekend, I go to a match. Fans in Russia and Britain support their teams differently. I’d say that Russian football and the way people support it is 10 years different to Britain. I don’t mean it’s behind — just different. In Britain, football has become a family sport: People bring their children to the match, and the fans sit and clap. But, in Russia, the fans mainly stand and shout very loudly for their team. That’s how it used to be in Britain in the past.”

“I support Liverpool, and I’ve got Liverpool scarves and posters hanging up in my Moscow flat. That’s my little bit of England. I even managed to work for the team a little bit. The Russian team I support is Spartak, although I would compare the way they play with Tottenham Hotspur rather than Liverpool. But, in my view, the stadiums where my favorite teams play — Luzhniki and Anfield — are very similar in atmosphere.”

“I adore the metro here. It’s comfortable, reliable, very clean and safe — and, unlike the London Underground, it sells tickets at normal prices. Moscow has a lot of plus points overall, and I really like living here. I didn’t come here to make money and get out. I plan to live here for many years, and perhaps buy a dacha — I’m very fond of dachas! — and experience everything for myself.”