Life goes on in post-riot Biryulevo 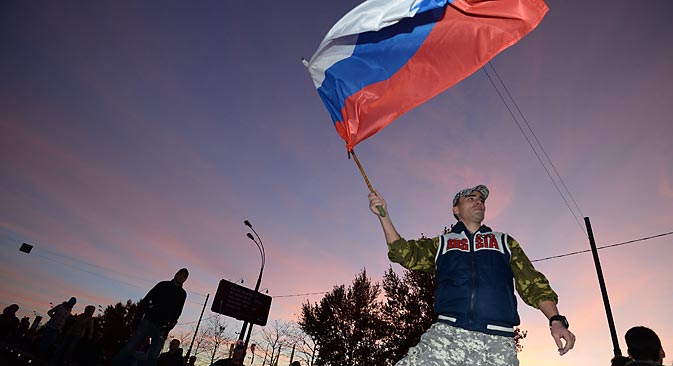 Biryulevo is by no means unique; other parts of Moscow (especially the eastern districts) have their share of immigrants as well. Source: Ramil Sitdikov / RIA Novosti

Russia may have to review its immigration policy in the wake of mass protests and rioting in Moscow.

Last week, the southern Moscow district of Biryulevo was gripped by mass protests; the protesters demanded changes to Russian immigration policy. An RBTH correspondent looks at why the outbreak of public anger over immigration happened in Biryulevo, of all places.

Moscow is like a layer cake: The layers almost never mix, and moving from one to another can be somewhat of an adventure. Muscovites are used to walking the beaten track from home to work and back again, to sticking to the company of people they have known since childhood or college years, and to eating out only in places frequented by their friends. When they hear about events happening in some far-flung district of the capital, it sometimes feels as though the news is coming from another planet.

Biryulevo, however, is a word Muscovites are quite used to hearing. The name has become almost a byword for a remote and seedy part of town. Sitting right on the edge of Moscow and almost cut off from the rest of the city by two railway lines, Biryulevo is essentially an enclave where life is distinctly different even from the neighboring commuter districts.

“Even 10 years ago it was already a dangerous part of town," says Yuri, who used to live in Biryulevo. “I once had my face smashed up by the local thugs so badly that I had to stay home for three weeks. But, back at the time, there weren’t really any safe parts of Moscow. Since then, the rest of the city has gradually become safer, but here nothing has changed.”

Anastasia, who has lived all her life in Biryulevo, says she does not really take note of what is happening in the district. She gets up early in the morning for her daily commute to central Moscow, then comes back home late in the evening, too tired to go out or take a walk in the local park.

Nikael Bikua-Mfantse is a member of the Russian national rowing team. He grew up in Biryulevo, but he wants to move out now that he can.

“I am not justifying the thugs who started all these pogroms," he has told the sports.ru website.

“But the way things are in this country, the government is not going to take any note until the people go out and do something. The problem with migrants in Biryulevo has long been bad. There really is a lot of them, and there is a lot of tension in the air. When I go out for a walk with my wife, I try to steer well clear of some parts of the district. About five years ago, the authorities opened a new park for the locals to spend some time outdoors. But, as soon as the darkness falls, there's almost no one left in that park but migrants. They don’t respect our laws, our traditions, our culture. But I wouldn’t say that all the problems in our district are down to the migrants. Those who were born and bred hear are no angels, either.”

To all outward appearances, Biryulevo is just another commuter district, full of high-rise apartment blocks, grocery stores and numerous small buses ferrying people to the nearest subway station, which is quite a long way away. Several new cafes serving ethnic food have sprung up here in recent years. The owner of one such cafe says business is brisk; why travel to the city center when one can meet up with friends over a meal right here in the district? The Azeri food served here is to everyone’s taste; even the local policemen have become regulars.

The owner says he was beside himself with worry when tensions flared up between the migrants and the locals: “I just don’t understand such behavior. Why carry a knife in the city? That may be the tradition out in the mountains, but there are no mountains here in Moscow."

here are, however, some places in Biryulevo where, as the Muscovites themselves put it, "Russian passport holders are not welcome." RBTH’s correspondent had to hire a guide before she could visit one these places—a club where the locals (or rather, the migrants living in the district) gather for dance parties. The bouncer at the door was a large and surly-looking woman; she later told us she used to work as a guard in a women's jail. Some Slavic faces could be seen here and there; most of them, however, were young women accompanying gentlemen from the Caucasus or Central Asia.

On a Sunday night the club was filled to capacity. The atmosphere in the establishment was such that it was hard to believe this was still in Moscow and that the year is 2013. It seemed more like the “roaring ‘90s”—the time of street bazaars, gangster shootouts and bootleg alcohol. Our guide gave the bottles and the labels a careful inspection before letting us have a drink. Many of the scantily clad ladies on the dance floor appeared to represent workers in the sex industry.

People who described themselves as regulars told us that fights are a regular occurrence here, and that the best thing for us to do was to keep our heads low so as not to attract any unwanted attention. All through the night, there was a strong feeling of not belonging—a feeling that Slavic appearance makes one unwelcome in this club.

As a correspondent, I was apparently put into the “guest” category by the regulars: Guests are customarily treated with a lot of respect in the Caucasus, so no one actually said anything rude to me. There were, however, a lot of strange looks from people who clearly did not understand what an "alien" was doing in their club.

Biryulevo is by no means unique; other parts of Moscow (especially the eastern districts) have their share of immigrants as well. In addition, police say they often have to deal with migrants squatting in old apartment blocks that await demolition in the city center. In the better-off southwestern parts of the Russian capital, migrants sometimes squat in basements; the locals are predictably unhappy.

Looking at the crime figures, they do not lend themselves to any obvious conclusions. According to the Moscow police department, the largest contributors to the crime statistics are actually petty thieves and pickpockets operating in the city center. Crime figures do not make a distinction between locally born-and-bred perpetrators and those arriving from the Russian provinces in the North Caucasus. These visitors have a distinct non-Slavic appearance, so many Muscovites think of them as migrants—but they have actually held Russian citizenship since birth.