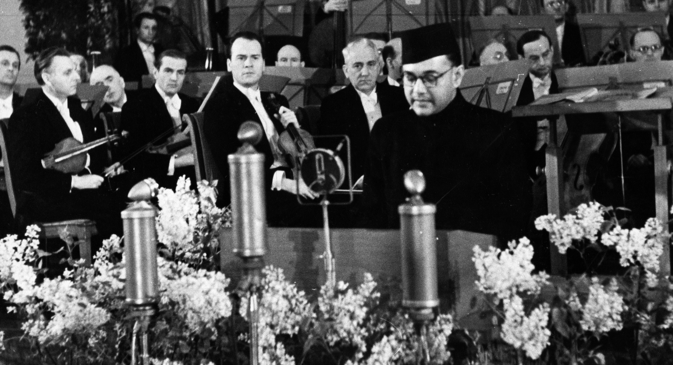 Getty Images
Responding to the Indian government’s queries on whether they had any classified documents related to Subhash Chandra Bose, the Russian government has said they do not have any documents or classified files related to the man whose disappearance over 70 years ago remains an enduring enigma of the Indian freedom movement, a parliamentarian was told earlier this month.

The Indian government declassified and, late last month released the last tranche of 25 secret files related to Subhash Chandra Bose, popularly known as ‘Netaji’ or great leader. There is, however, still no definitive closure about what happened to the hero of the Indian freedom struggle when he disappeared 71 years ago, though it is widely believed that he died in a plane crash while flying to Japan.

A section of Bose’s family has refused to accept that ‘Netaji’ died in that plane crash off Formosa (modern Taiwan) on August 18, 1945, within days of the Japanese surrender, ending World War II. They have perpetuated the “mystery” surrounding his death and sought to gain some political mileage, using the memory of his greatness, and implying that free India’s first Prime Minister and Congress Party colleague Jawaharlal Nehru had tried to “cover up” what actually happened to Bose.

Bose’s own daughter, Anita Bose Pfaff, a professor who married a German and lives in Germany, believes her father died in that crash and has sought a DNA test of the ashes of Bose, kept in the Renkoji temple in Tokyo, to forever end the mystery. Many others in the extended family also believe Bose died in that crash. However, there has always been concern that the Japanese government, which believes they are holding the ashes of the Indian leader, would be offended by the gesture.

Responding to a question in the Lok Sabha (Lower House of the Indian Parliament) earlier this month, Kiren Rijiju, Minister of State for Home Affairs, said that Japan, which has a total of five secret files on Bose, would declassify two crucial files related to ‘Netaji’ by the end of the year.

Glimmer of light in Bose mystery

The files are now available at the National Archives of India. Earlier Indian governments had refused to make the files public, saying they could “damage relations with friendly countries.”

One of the files recently declassified by the Modi government says the Indian government was “not inclined to favour” the bringing back of Netaji’s ashes kept in Renkoji temple, Tokyo “due to possible adverse reactions from members of Netaji’s family, as well as certain sections of the public, who refused to believe in his death in the plane crash in August, 1945”.

Sugato Bose, historian, Member of Parliament and grand nephew of Subhash Bose, who is convinced that the Indian leader died in the 1945 plane crash, said, “The argument that releasing such documents may sour relations with friendly countries does not hold water. In 1941, the (Winston) Churchill government had initiated a move to assassinate ‘Netaji’. Does it mean it would impact India’s relations now with the David Cameron government?”

Indian Prime Minister Narendra Modi had met a group of members of Bose’s extended family last year and assured them he would declassify all files related to Bose and personally take up the issue of the disappearance of Bose with the Russian President when he visited Moscow for the bilateral summit. There has been a lot of speculation that, faking the plane crash, Bose had disappeared into Manchuria and from there into the Soviet Union in 1945.

Dr Satya Narayan Sinha, a former aide of Nehru, had testified under oath to an inquiry Commission set up by the Indian government to probe Bose’s death, that he had received some notes dated 1946 from military missions in Berlin from Gen Stewart and Maj Warren saying that Bose did not die but was suffering at the hands of the Russians.

Ahead of Modi’s visit to Moscow on December 23 and 24, 2015, Ashis Ray, a journalist and grandnephew of Bose, released a set of documents in London, which he claimed were part of the classified Indian government files on Bose, once a president of the Congress party.

Ray released what he said was the correspondence between the Indian and Russian governments between 1991 and 1995 over the whereabouts of ‘Netaji’ Bose in 1945, the year of his death as per records.

In one letter, the Indian government sought to know if Bose had entered Russian territory in "1945 or subsequently."

In September 1991, shortly after the collapse of the Soviet Union, the Indian government wrote to the Russian Federation, asking whether Netaji had entered or stayed in Russia. The Russians wrote back in January 1992, saying, "No information whatsoever is available on the stay of the former President of INC (Indian National Congress)."

Three years later, in 1994, India again wrote to Russia. "There has been further speculation in this context reportedly on the basis of archival material. Please examine all material for a final determination on whether or not Netaji Subhas Chandra Bose entered or stayed anywhere in territory of Soviet Union in 1945 or subsequently." Russia repeated its earlier reply.

"To arrive at a conclusion, we first need to eliminate what is not correct. This exchange of letters between the two governments is an indication that (Subhash Chandra) Bose perhaps did not go as suspected by a few people," said Ray, who independently researched ‘Netaji’s’ disappearance and uploaded all his researched material on to a website www.bosefiles.info to conclude that Bose had indeed died in the 1945 plane crash.

"(Netaji's) family and his followers need a closure and my effort to independently find out the truth will hopefully get just that," he said.

“It is sad that Bose’s many great achievements are forgotten in the controversy surrounding his death,” said Rudrangshu Mukherjee, an eminent historian, in a recent television interview.