Ancient Suzdal: From Prokudin-Gorsky to the present 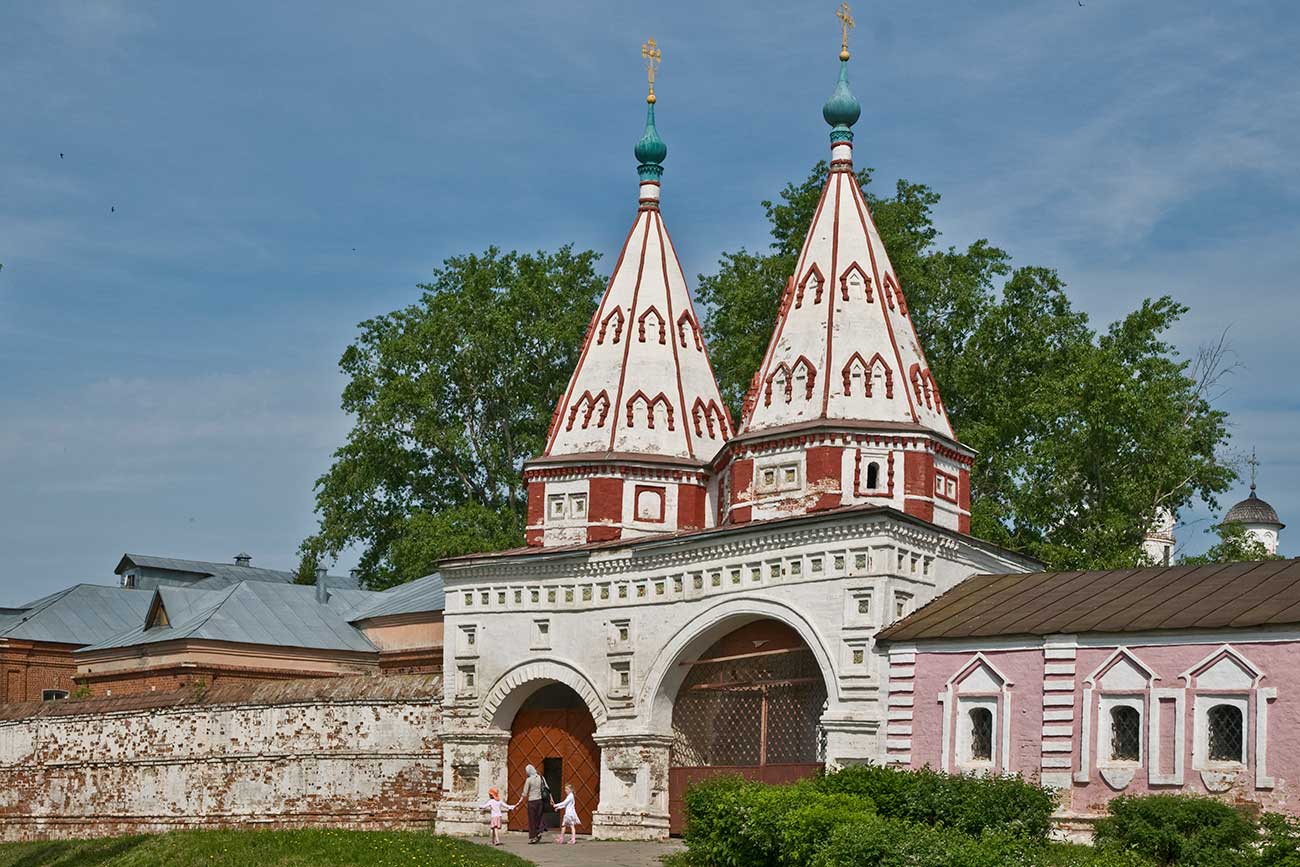 During the 11 years Sergei Mikhailovich Prokudin-Gorsky traveled and documented the Russian Empire, his vision of photography as a form of education and enlightenment was demonstrated with special clarity through his photographs of medieval architecture in the historic settlements northeast of Moscow, including Suzdal, Vladimir and Pereslavl-Zalessky.

In summer 1912, Prokudin-Gorsky visited the ancient town of Suzdal, a rich center of medieval Russian heritage. Bypassed by railroad construction and with little industry, even today Suzdal retains the bucolic atmosphere captured so poignantly in Prokudin-Gorsky’s photographs. At the time of Prokudin-Gorsky’s visit, the town had about 7,000 inhabitants and an extraordinary concentration of churches and monasteries. The town has grown little over the years — the current population is only 10,000. 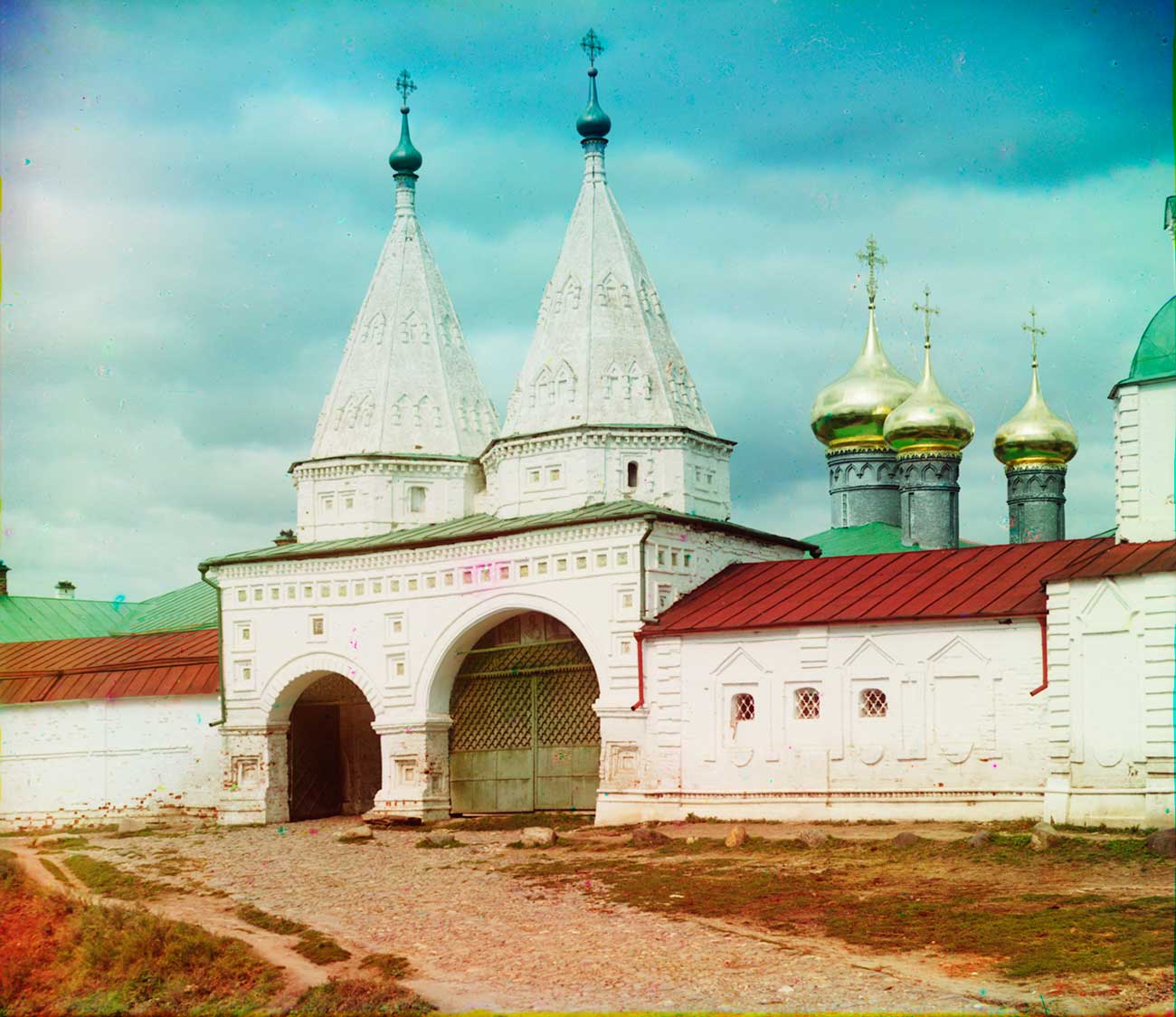 The home of early saints

Among those monastic institutions Prokudin-Gorsky photographed was the Convent of the Deposition of the Robe, perhaps best known for its delightful gate crowned with twin miniature towers. My own photographs of the site span a period from 1972 to 2009.

The origins of the convent extend to the early days of the Suzdal principality. It was founded in 1207 by Bishop Ioann, who dedicated it to a Byzantine holiday commemorating the discovery of the Robe of the Virgin Mary. The convent was known for one of its first monastics, St. Euphrosyne of Suzdal (1212-50), a princess who took monastic vows after the death of her betrothed. Although she lived at the nearby Intercession Convent, her final resting place was the Convent of the Deposition of the Robe. 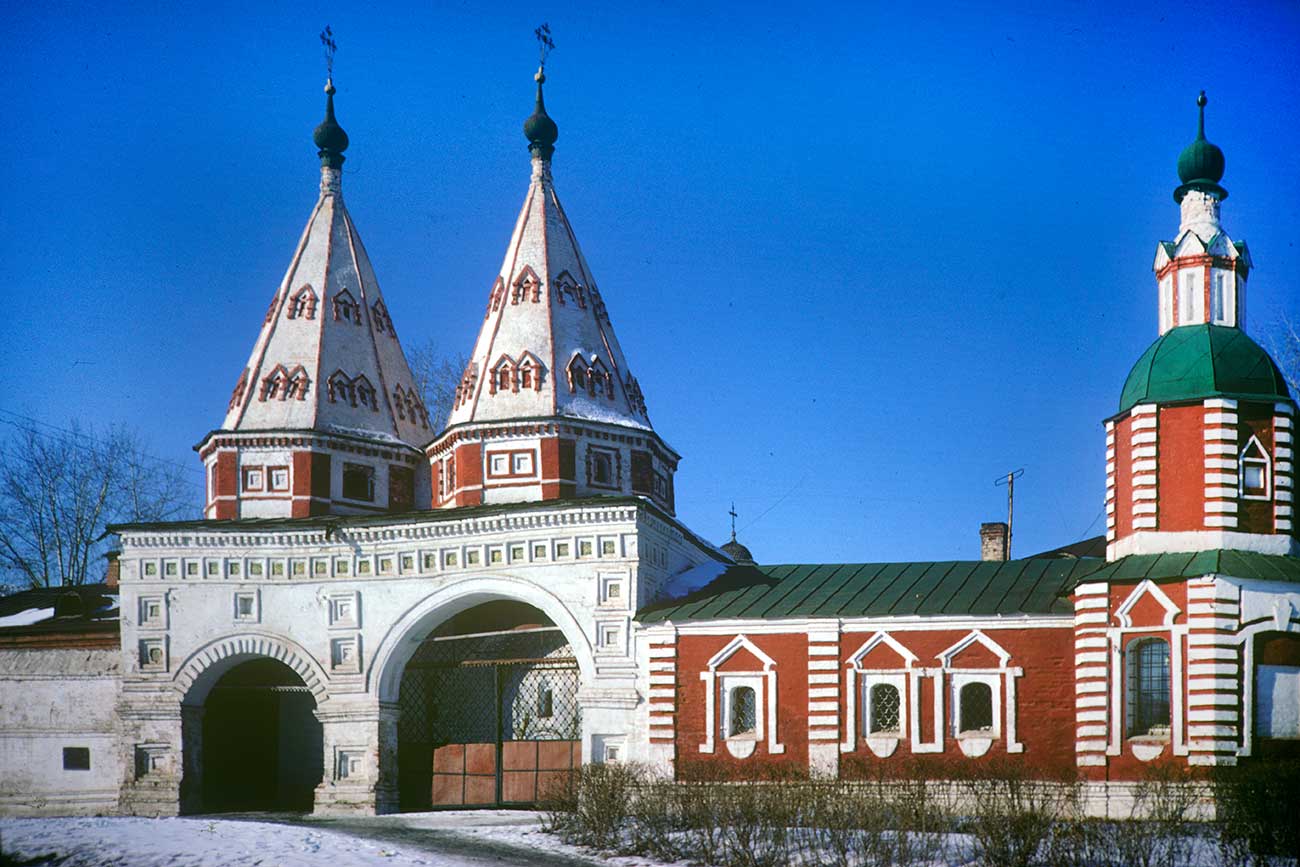 For much of its history, the convent shared the turbulent fate of Suzdal, which suffered at the hands of invaders from the 13th to the early 17th centuries. Its earliest surviving monument is the Cathedral of the Deposition, visible in the right background of the Prokudin-Gorsky photograph. Erected in the early 16th century, the small structure adhered to traditional church forms and had three cupolas. 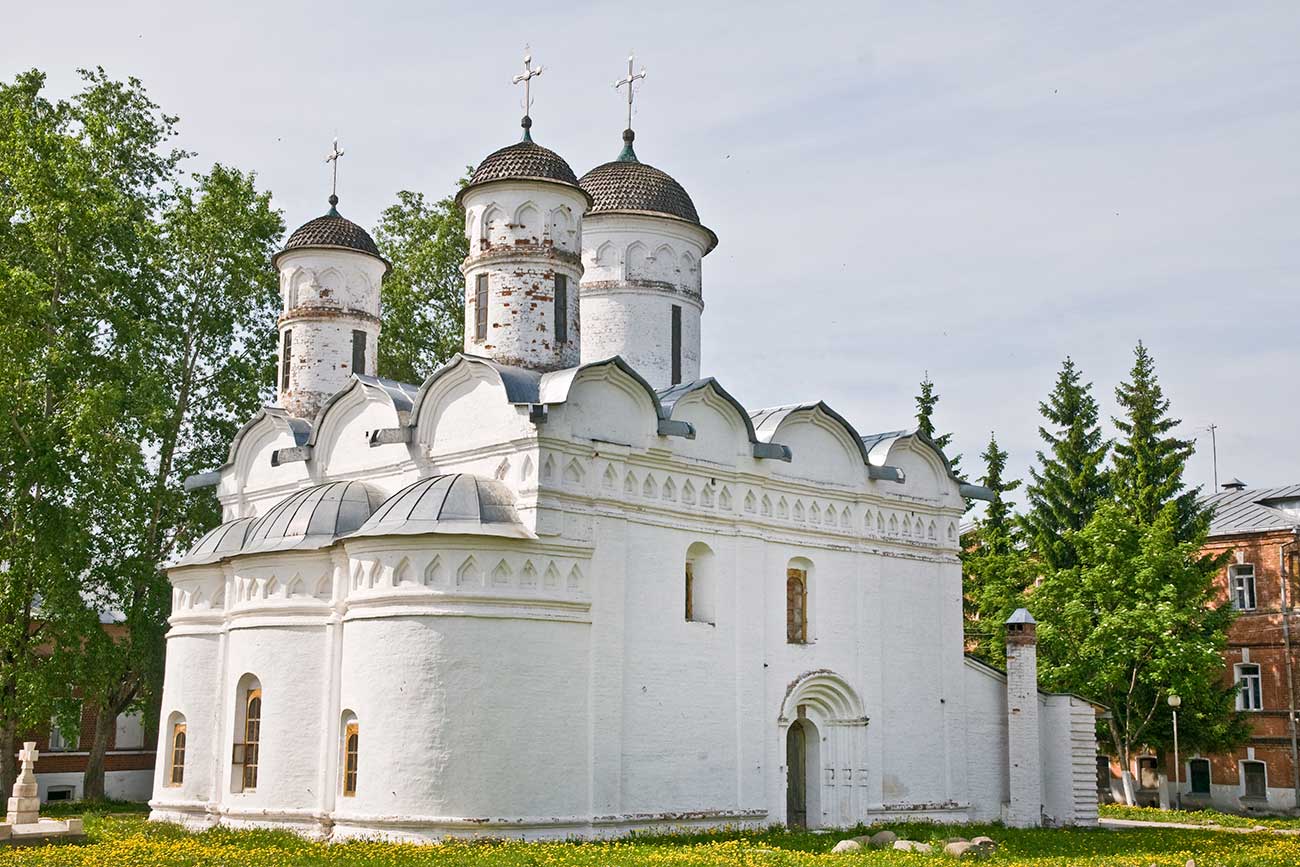 Convent of Deposition of the Robe. Cathedral, northeast view. May 29, 2009. / William Brumfield

In the 19th century, the cupolas were modified to the onion domes visible in the Prokudin-Gorsky photograph. They were destroyed in 1929 when the structure was converted to an electric station for security units who guarded the prison in the nearby Savior Monastery. In the late 1960s, the cupolas were restored to their original “helmet” form as seen in my photographs.

In 1688, the cathedral’s west front gained a small narthex which was decorated with  polychrome ceramic tiles, also photographed by Prokudin-Gorsky and recorded decades later in my photographs. The narthex was built by Ivan Mamin, Andrei Shmakov and Ivan Griaznov, who may have been serfs who worked for the monastery. 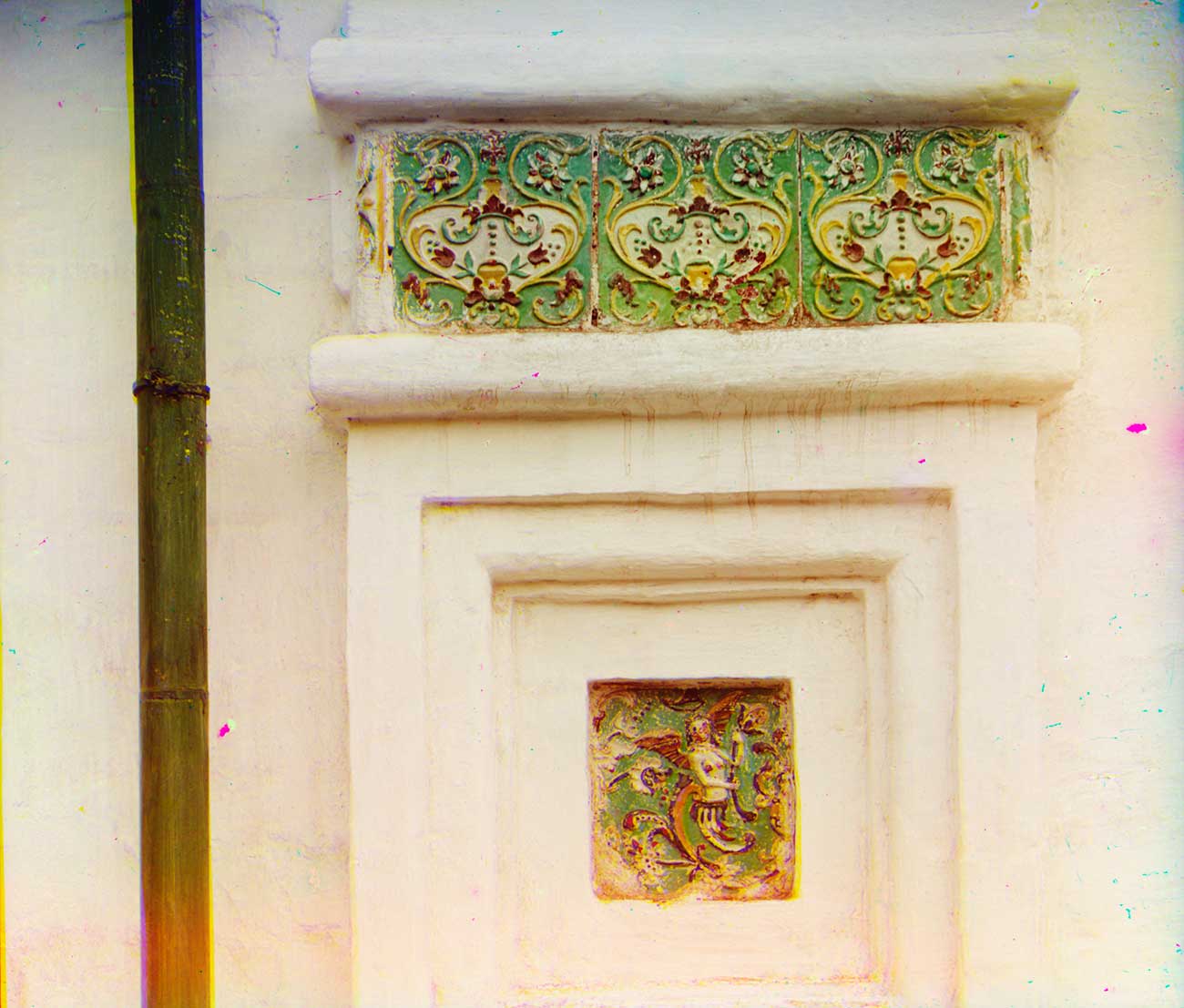 They also built Holy Gate, whose festive appearance is one of the unique monuments of Russian architecture. Its base consists of two arched entrances — one for pedestrians and the other for vehicles. The base is decorated with recessed panels (shirinki) that contain ceramic tiles. 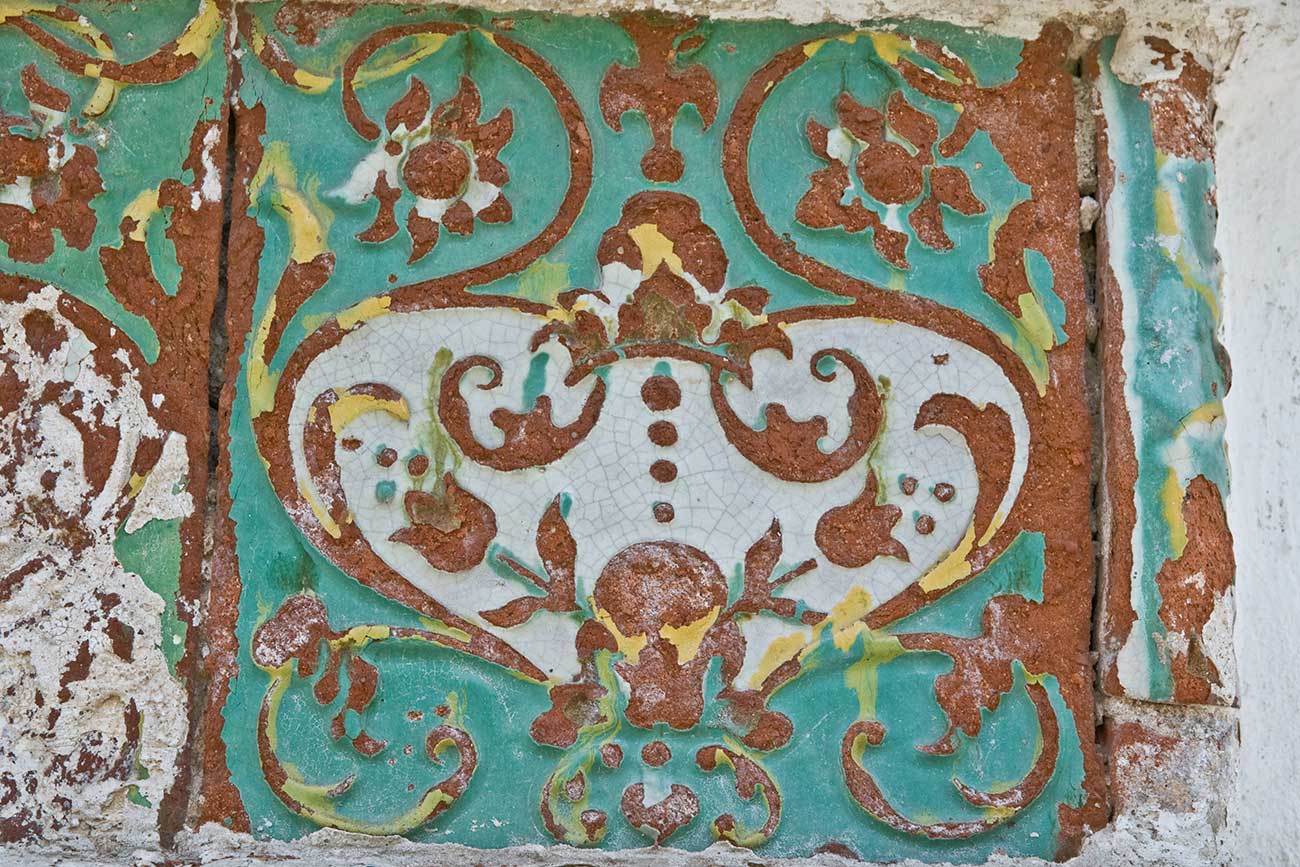 Convent of Deposition of the Robe. Cathedral, ceramic tile on west facade. May 29, 2009. / William Brumfield

The roof supports two octagonal forms, also ornamented with shirinki and miniature windows with decorative surrounds. Above are 8-sided tower caps known as “tents.” They are decorated with two rows of framed openings that are not in fact open, although they appear to be in my 1972 photograph. Each “tent” is crowned with a small cupola and cross. 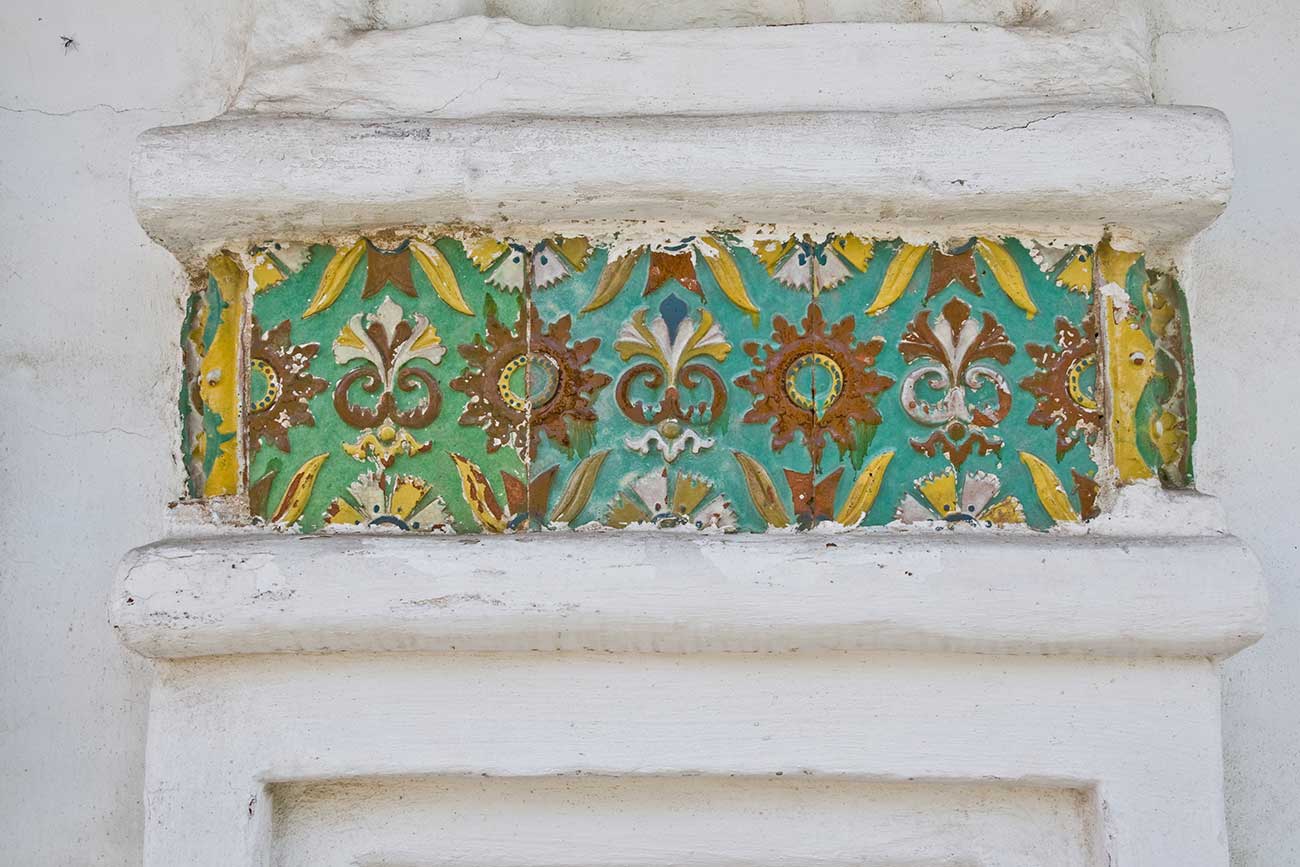 Convent of Deposition of the Robe. Cathedral, ceramic tiles on west facade. May 29, 2009. / William Brumfield

Isolated for much of the 20th century, Suzdal endured severe damage to its architectural heritage: 15 churches were destroyed and many others defiled. With the declaration of the town as a national cultural landmark in 1967, the process of restoration accelerated. In 1999 the Monastery of the Deposition of the Robe was returned to the Orthodox Church and reconsecrated as a convent.

In the early 20th century the Russian photographer Sergei Prokudin-Gorsky invented a complex process for color photography. Between 1905 and 1916 he traveled through the Russian Empire and took over 2,000 photographs with the new process, which involved three exposures on a glass plate. In August 1918 he left Russia with a large part of his collection of glass negatives and ultimately resettled in France. After his death in Paris in 1944, his heirs sold his collection to the Library of Congress. In the early 21st century the Library digitized the Prokudin-Gorsky Collection and made it freely available to the global public. A number of Russian websites now have versions of the collection. In 1986 the architectural historian and photographer William Brumfield organized the first exhibit of Prokudin-Gorsky photographs at the Library of Congress. Over a period of work in Russia beginning in 1970, Brumfield has photographed most of the sites visited by Prokudin-Gorsky. This series of articles will juxtapose Prokudin-Gorsky’s views of architectural monuments with photographs taken by Brumfield decades later.