The Medieval Fortress of Belozersk: From Prokudin-Gorsky to the present 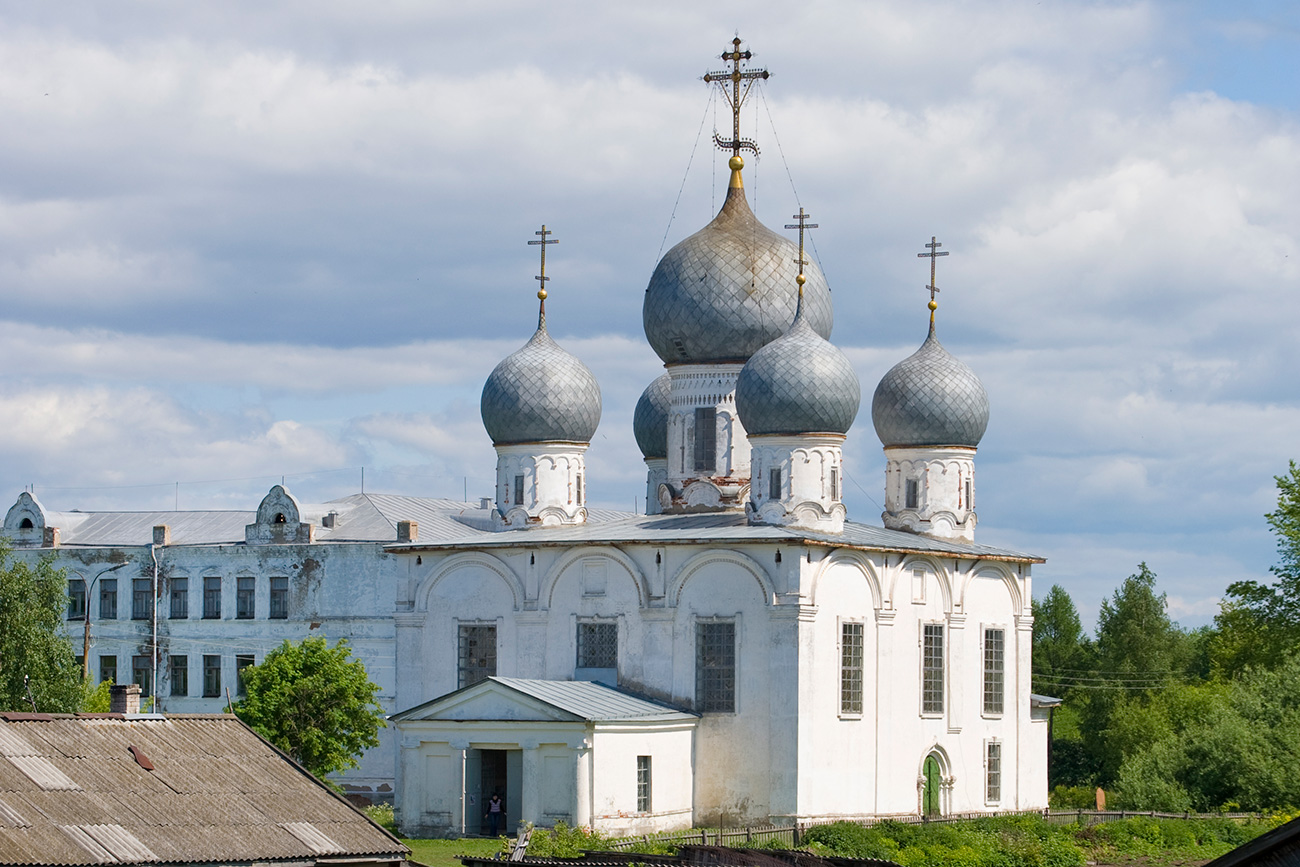 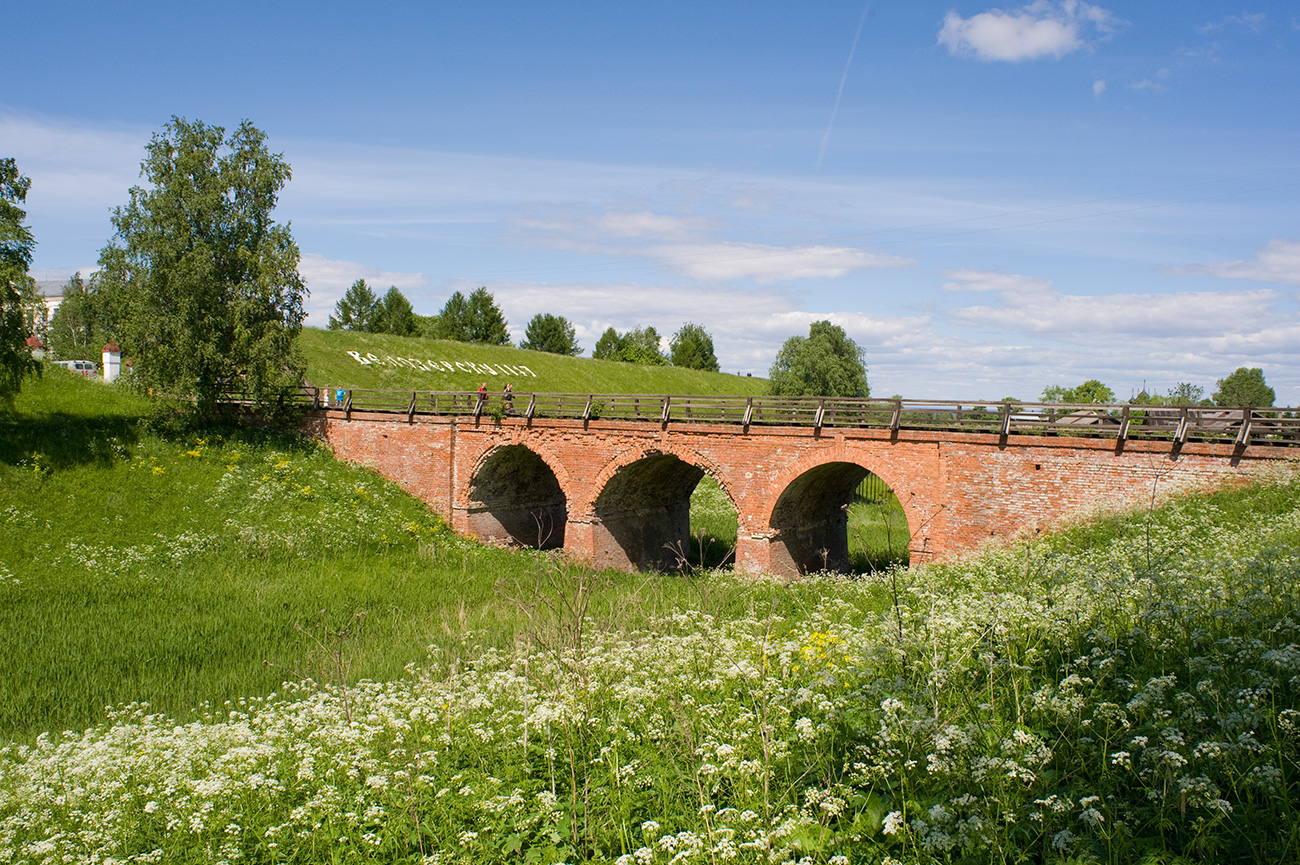 At the beginning of the 20th century, the Russian chemist and photographer Sergei Mikhailovich Prokudin-Gorsky invented a complex process for vivid, detailed color photography (see box text below). Inspired to use this new method to record the diversity of the Russian Empire, he photographed numerous historic sites during the decade before the abdication of Tsar Nicholas II in 1917.

Primary support for Prokudin-Gorsky’s project came from the Ministry of Transportation, which facilitated his photography along Russia’s rail and waterways. The Ministry was particularly interested in the Mariinsky Waterway, which connected St. Petersburg with the Volga River Basin. In the summer of 1909, Prokudin-Gorsky traveled along this waterway and produced a rich collection of images.

Especially significant is the work that he did in the small town of Belozersk, situated on the south shore of White Lake and at that time an active port on the Mariinsky Waterway. To the east of Belozersk, White Lake drains into the Sheksna River, a tributary of the Volga and now part of the route of summer cruise ships that travel between Moscow and St. Petersburg. My own work in the area began in the 1990s and continues to the present. 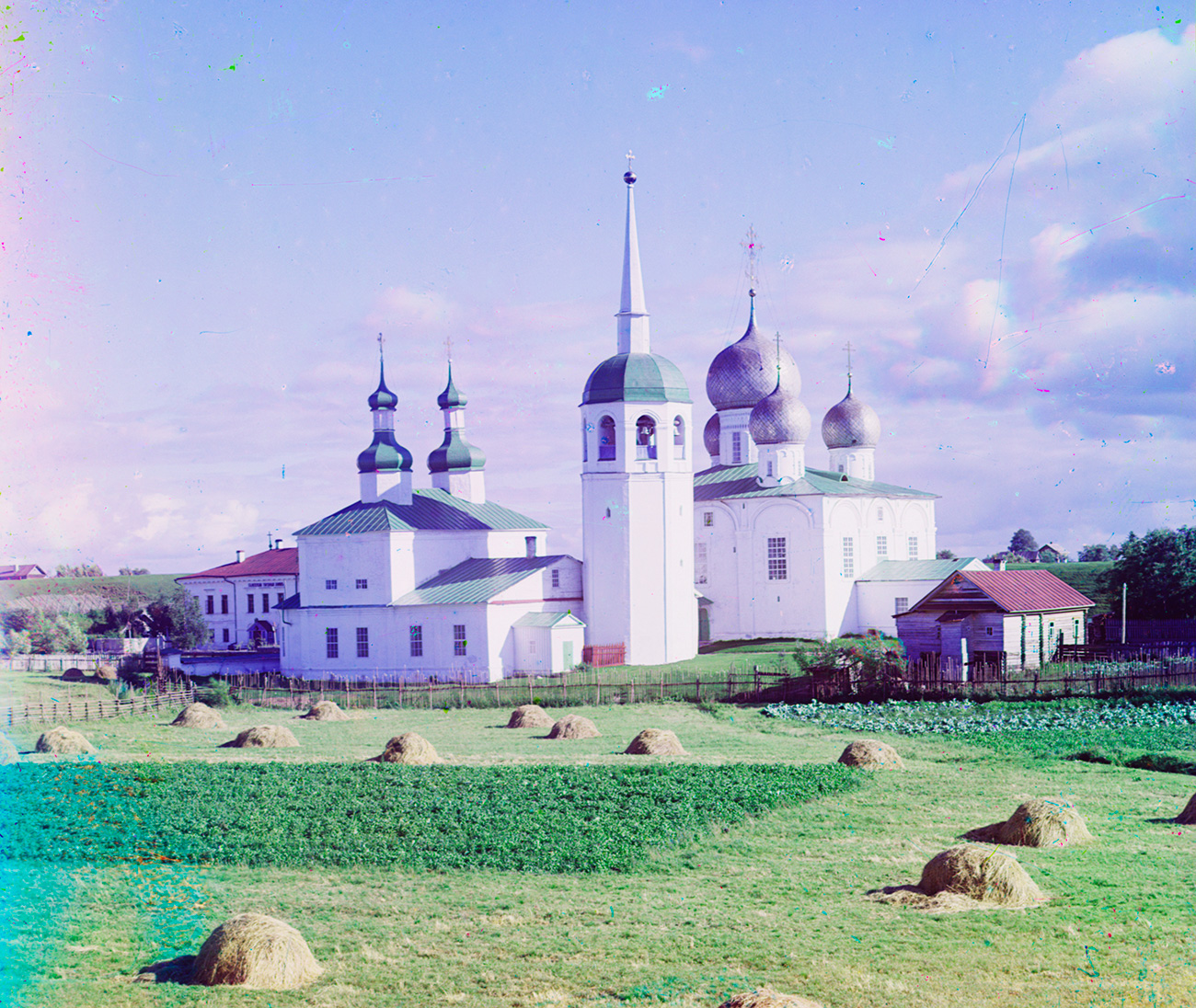 Belozersk is one of the earliest historically attested towns in Russia, first mentioned under 862 in the ancient chronicle "Tale of Bygone Years."  The details of its origins are lacking, and, in fact, its location changed more than once. The town was established in its current location in the late 14th century, and in the 15th century, it became a bulwark on Muscovy’s expanding northwestern frontier.

Tsar Ivan III (the Great) understood this strategic position, and in 1487 constructed a large fortress, or kremlin, whose earthen ramparts still stand. The Belozersk citadel is one of the best surviving examples of a type of earthen fortress widespread among the eastern Slavs. Roughly quadrilateral in shape, the kremlin was formerly protected on at least two sides by a moat. Its interior southwest portion is occupied by a pond essential for an active fortress.

In the late 17th century, the kremlin ramparts still had a log wall containing eight towers and two gates. No longer of military significance, the decaying log walls were removed in the 18th century. The main entrance to the massive earthworks was from the east.

In the late 18th century a graceful arched brick bridge was built to span the ancient moat. 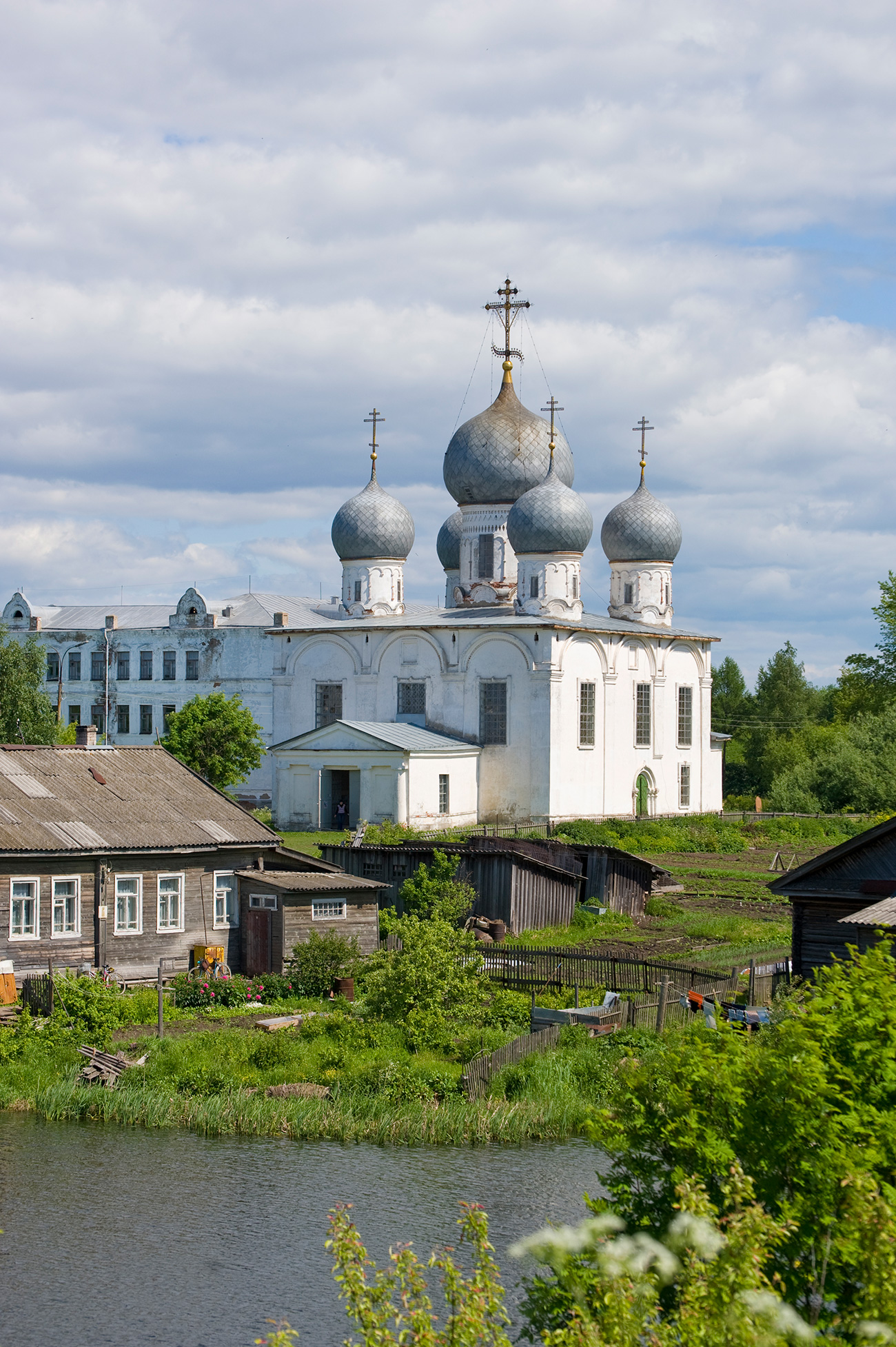 As befitted the regional importance of Belozersk, the fortress interior was arranged around a cathedral compound. The existing Cathedral of the Transfiguration of the Savior was begun in 1668 during the reign of the first Romanov Tsar Alexei Mikhailovich and completed in the late 1670s, with a narthex added in the early 19th century. Support for the cathedral’s construction came from both Moscow and local sources. 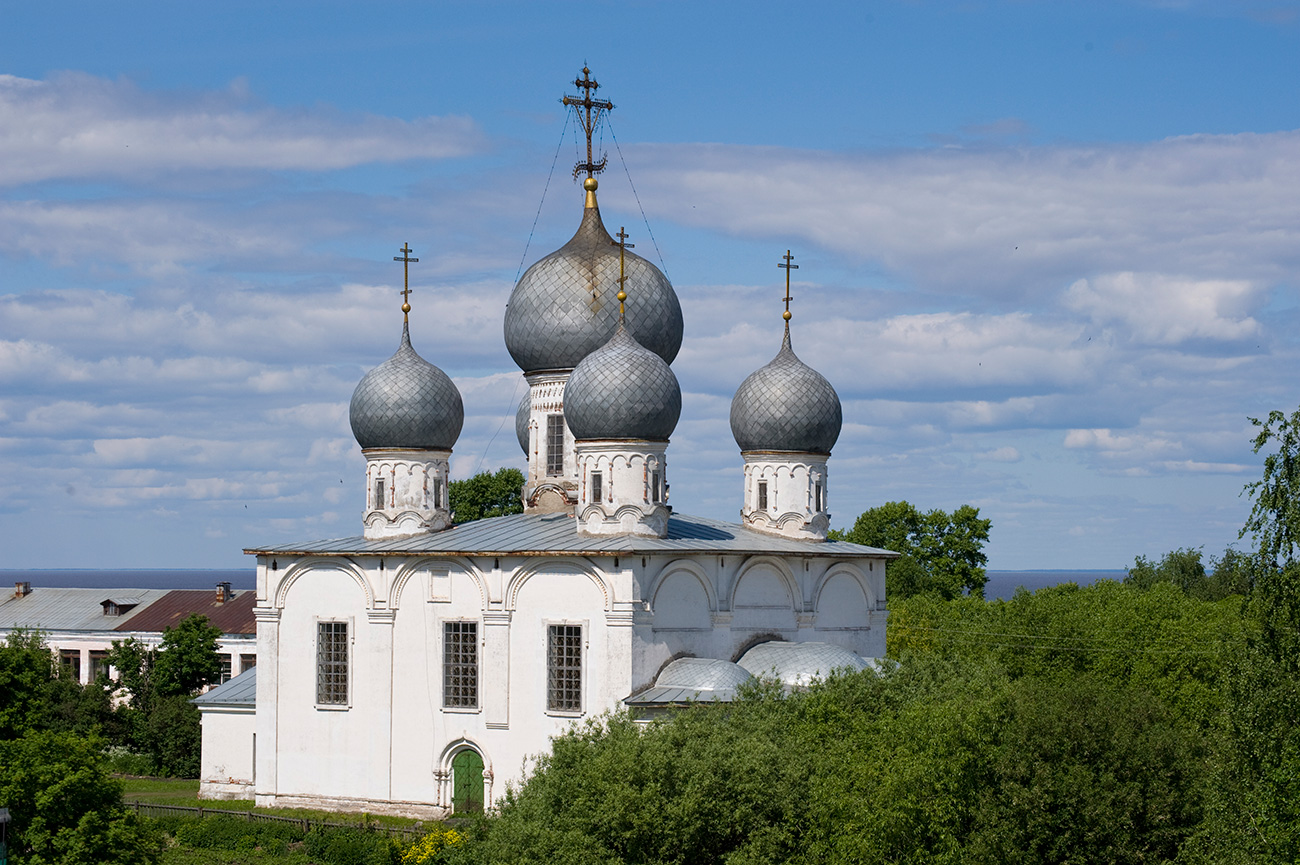 The Transfiguration Cathedral follows a 16th-century pattern typical for large churches in provincial centers. The facades are each divided into three bays capped by semicircular gables known as zakomary. The cathedral is crowned with large cupolas and high ornamental iron crosses. They are visible in both my photographs and Prokudin-Gorsky’s. The drum, or cylinder, beneath each cupola displays an arched pattern with slender attached columns.

Even with its tall cupolas, the height of the Transfiguration Cathedral seems truncated, due in part to a slight subsidence of the boulder foundations into the soft ground--a common occurrence with medieval churches in northwest Russia. Presumably, the builders decided not to risk a taller structure on such a base. 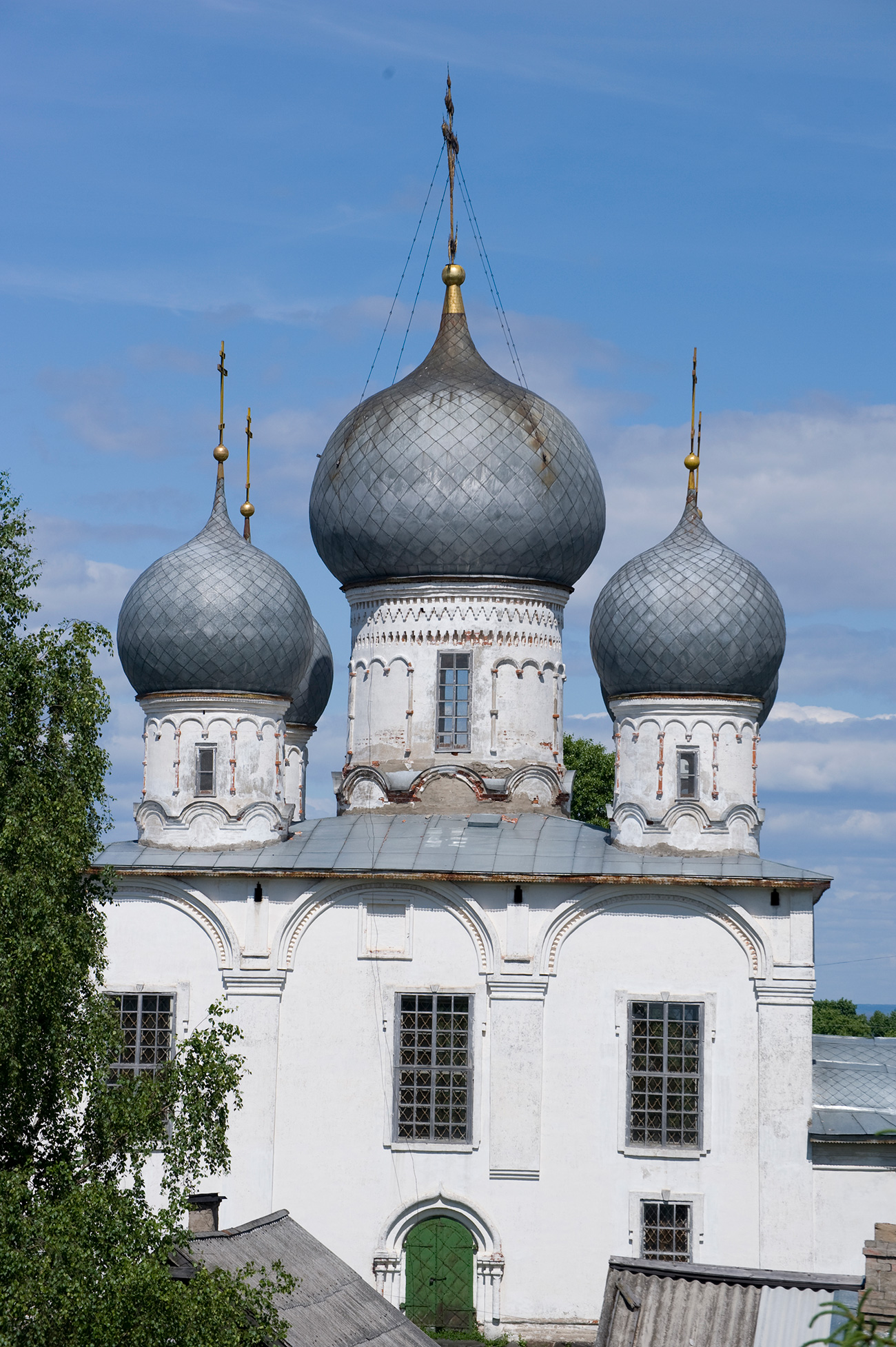 The entire ensemble is beautifully presented in Prokudin-Gorsky’s 1909 photograph, taken from the northwest on a summer afternoon. Both the bell tower and St. Basil’s Church were demolished in the Soviet period, leaving only the 17th-century Transfiguration Cathedral. The northwest view is now obscured by trees and later structures. My photographs show clear views from the south and east kremlin ramparts. 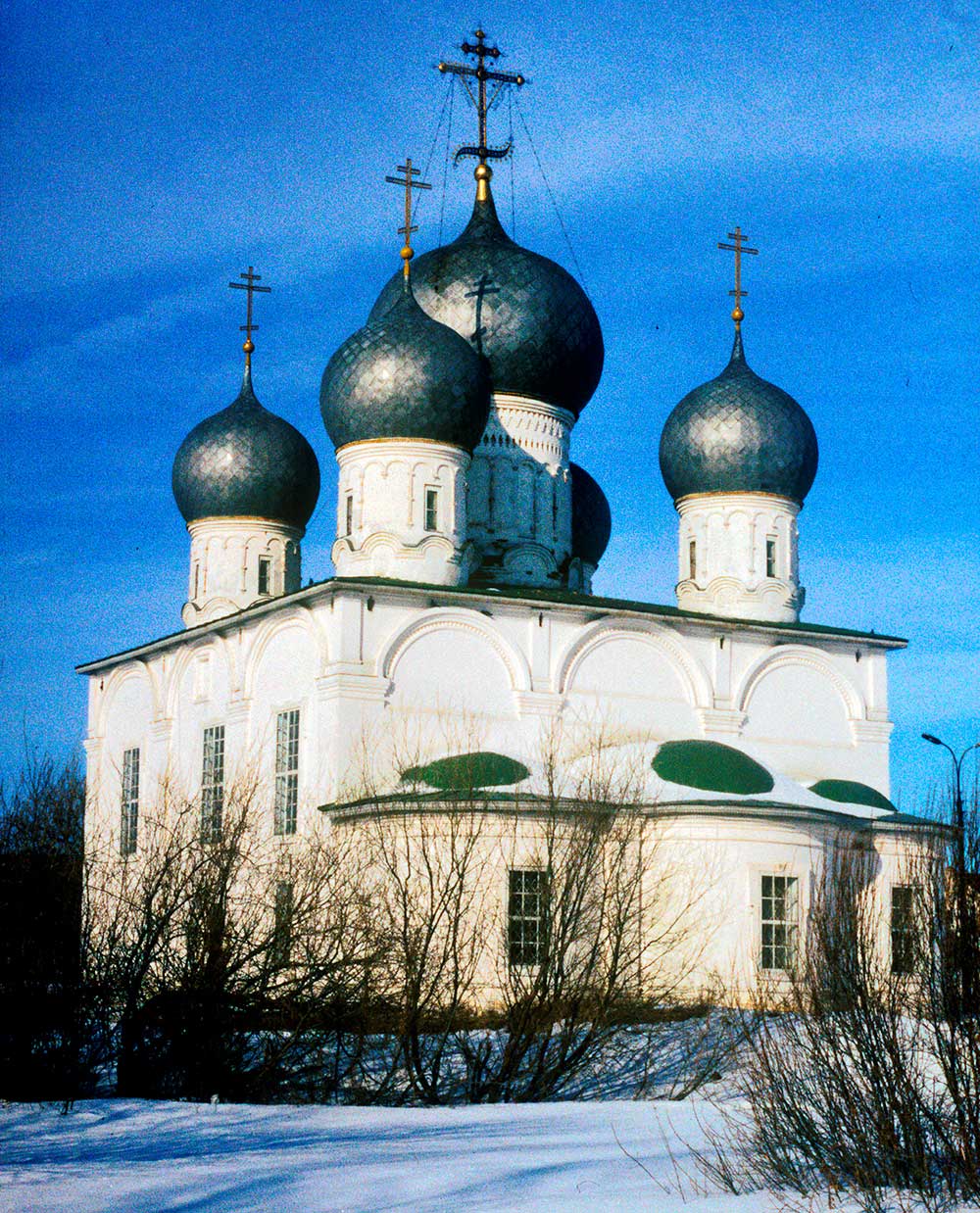 Prokudin-Gorsky also photographed the cathedral interior, which has one of the most unusual icon screens in the Russian north. This dramatic work of art, which deserves its own space, will be the subject of a future article.

A final historical component visible to the left in Prokudin-Gorsky’s photograph is the building that housed local administrative offices. Built around the turn of the 19th century, it has a simplified neoclassical style widespread in the provinces. The structure is seen in the foreground of one of my photographs from the east rampart. 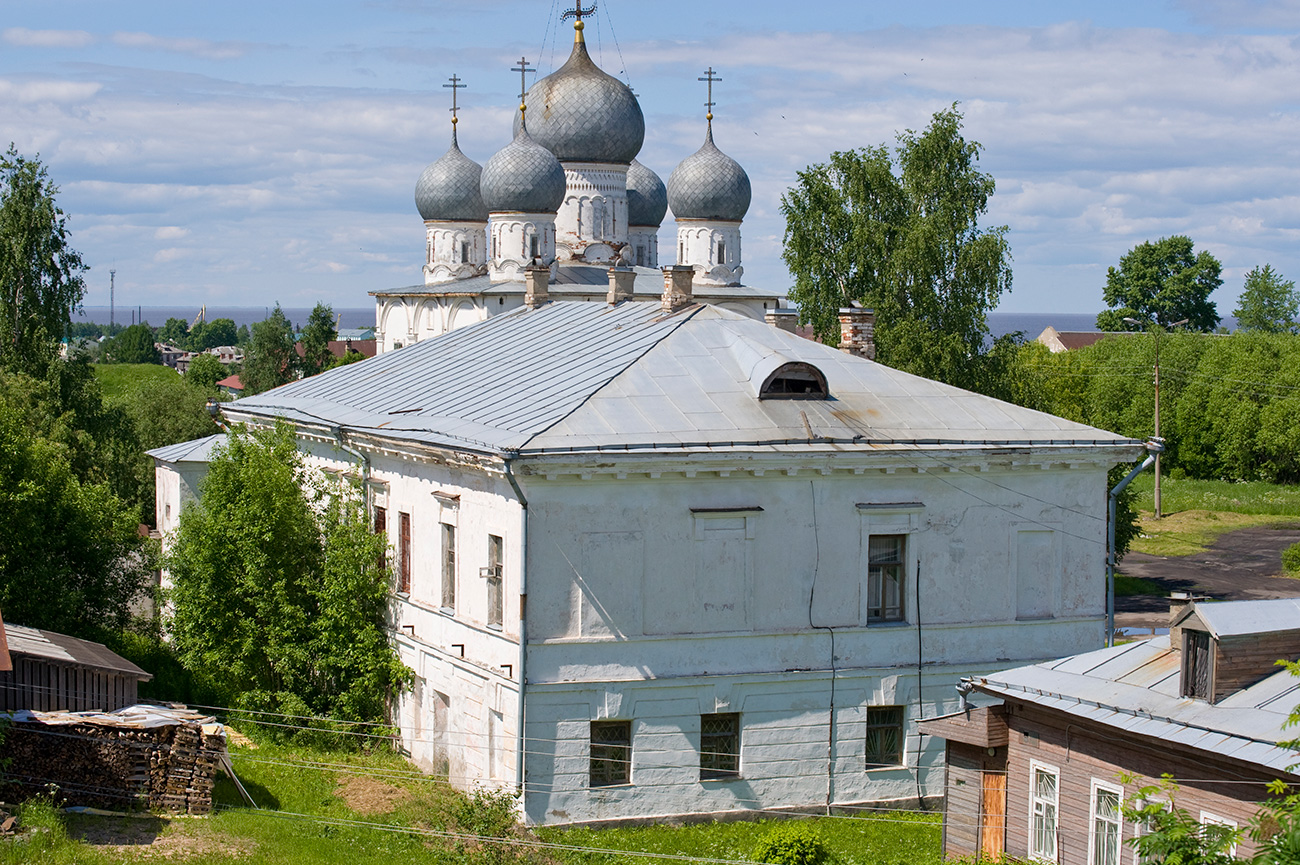 One of the most appealing parts of Prokudin-Gorsky’s photograph is the bucolic view of haystacks among carefully tended plots with potatoes and cabbage. The once active fortress, whose ramparts are visible in the background, reverted to the peaceful use of its fertile soil. Over the next three decades this placid scene would be disfigured in the aftermath of revolutionary change. 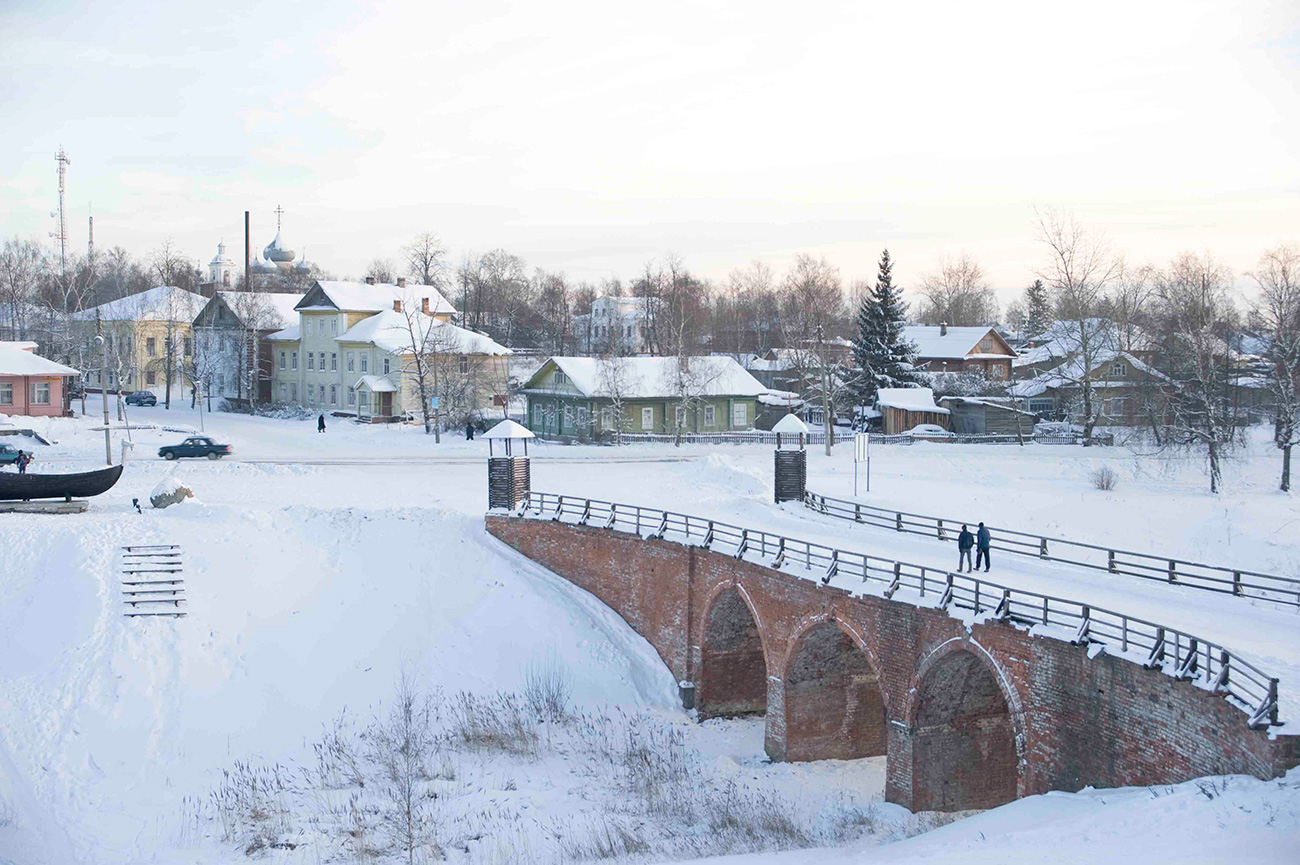 In the early 20th century the Russian photographer Sergei Prokudin-Gorsky invented a complex process for color photography. Between 1903 and 1916 he traveled through the Russian Empire and took over 2,000 photographs with the new process, which involved three exposures on a glass plate. In August 1918 he left Russia with a large part of his collection of glass negatives and ultimately resettled in France. After his death in Paris in 1944, his heirs sold his collection to the Library of Congress.In the early 21st century the Library digitized the Prokudin-Gorsky Collection and made it freely available to the global public. A number of Russian websites now have versions of the collection. In 1986 the architectural historian and photographer William Brumfield organized the first exhibit of Prokudin-Gorsky photographs at the Library of Congress. Over a period of work in Russia beginning in 1970, Brumfield has photographed most of the sites visited by Prokudin-Gorsky. This series of articles will juxtapose Prokudin-Gorsky’s views of architectural monuments with photographs taken by Brumfield decades later.

Read more: Ancient Suzdal: From Prokudin-Gorsky to the present