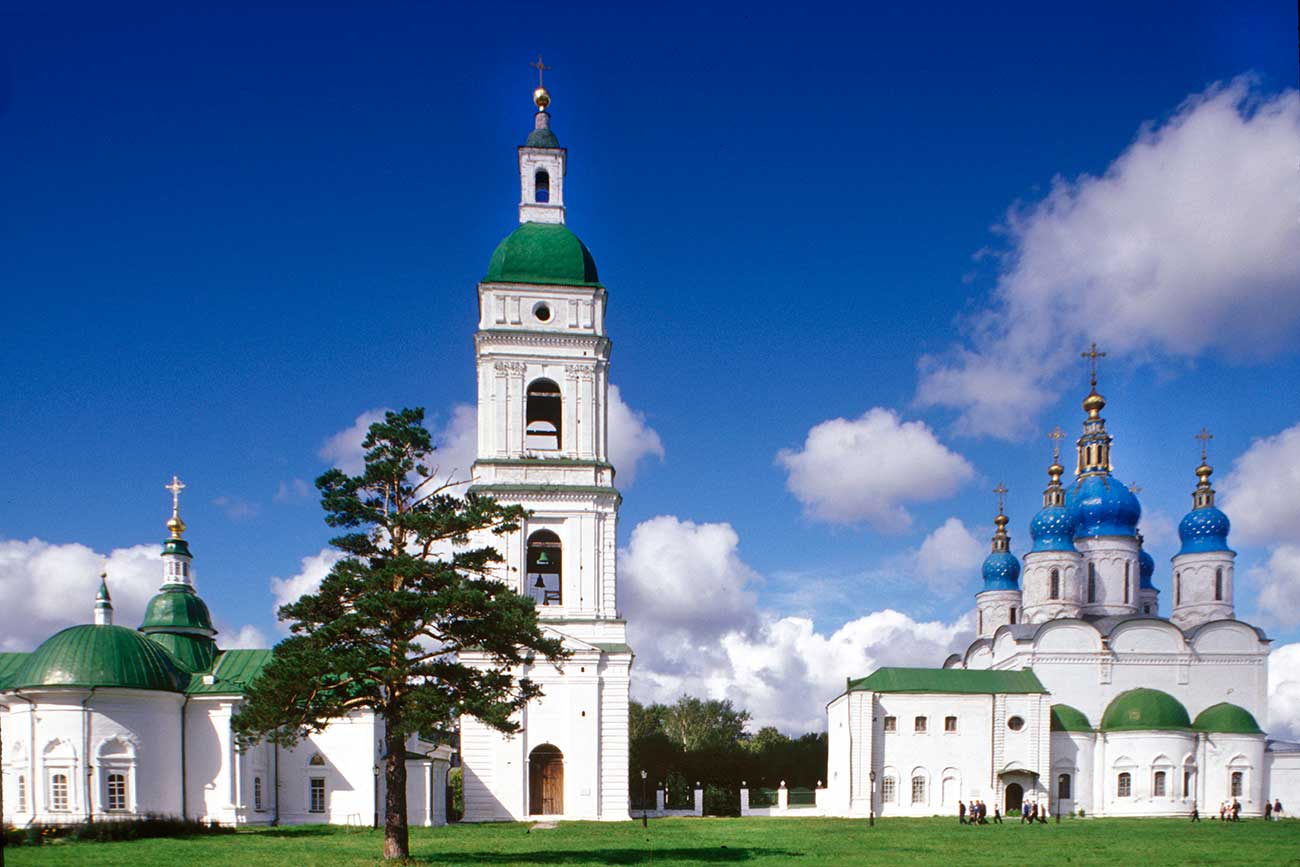 William Brumfield
The citadel’s churches connected the distant territory to the capital.

At the beginning of the 20th century, the Russian chemist and photographer Sergei Prokudin-Gorsky invented a complex process for vivid, detailed color photography (see box text below). His vision of photography as a form of education and enlightenment was demonstrated with special clarity through his photographs of architectural monuments in the historic sites throughout the Russian heartland. 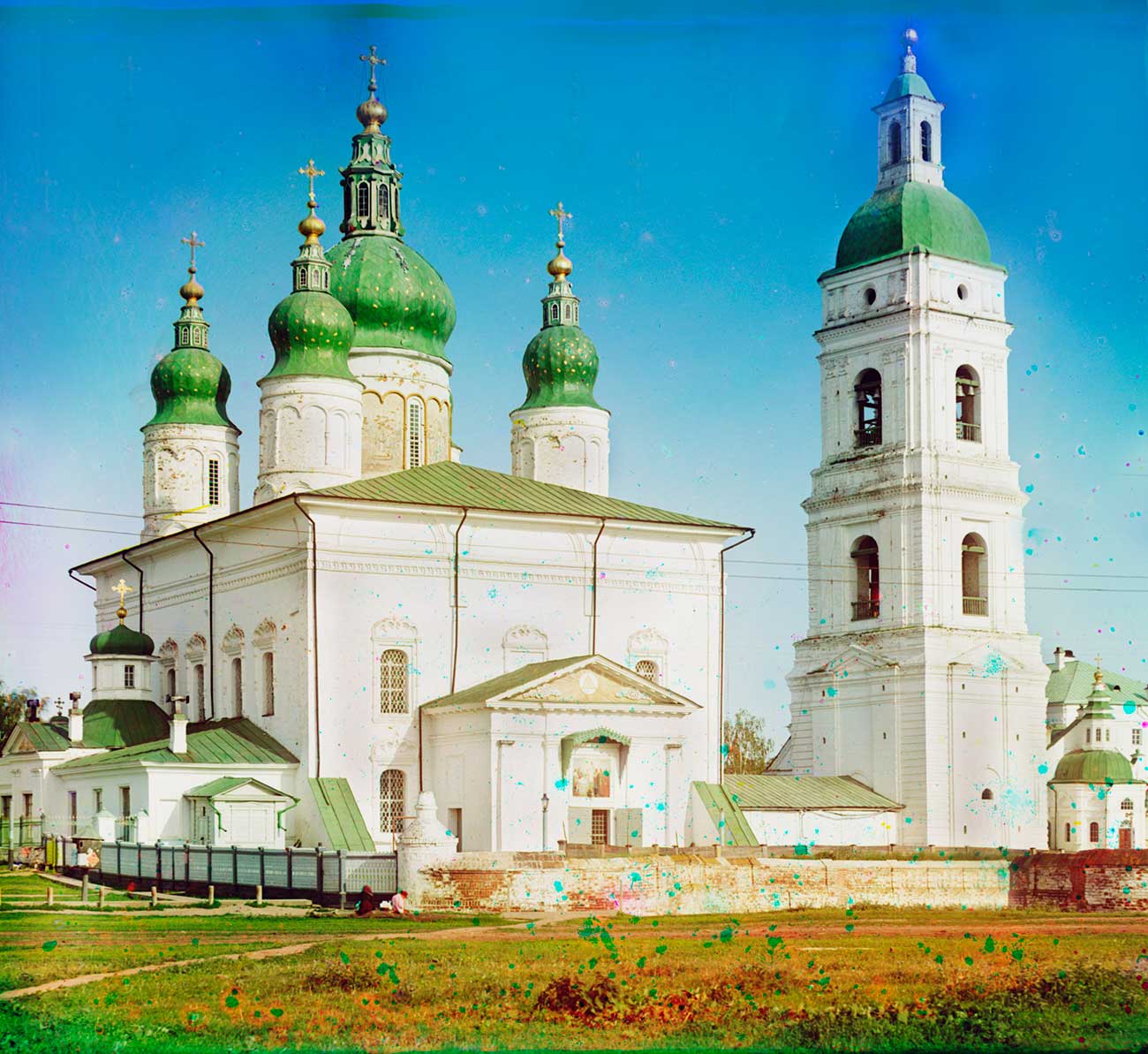 In June 1912, Prokudin-Gorsky ventured into western Siberia as part of a trip along the Kama-Tobolsk Waterway, a historic link between the European and Asian sides of the Ural Mountains. The part of his journey from Tyumen (on the Tura River) to Tobolsk was on the small paddlewheel steam cutter “Tyumen,” which he photographed. In Tobolsk, he took a number of photographs, including an excellent view of the St. Sophia-Dormition Cathedral, the earliest church monument. My photographs of the cathedral ensemble were taken in the late summer of 1999. 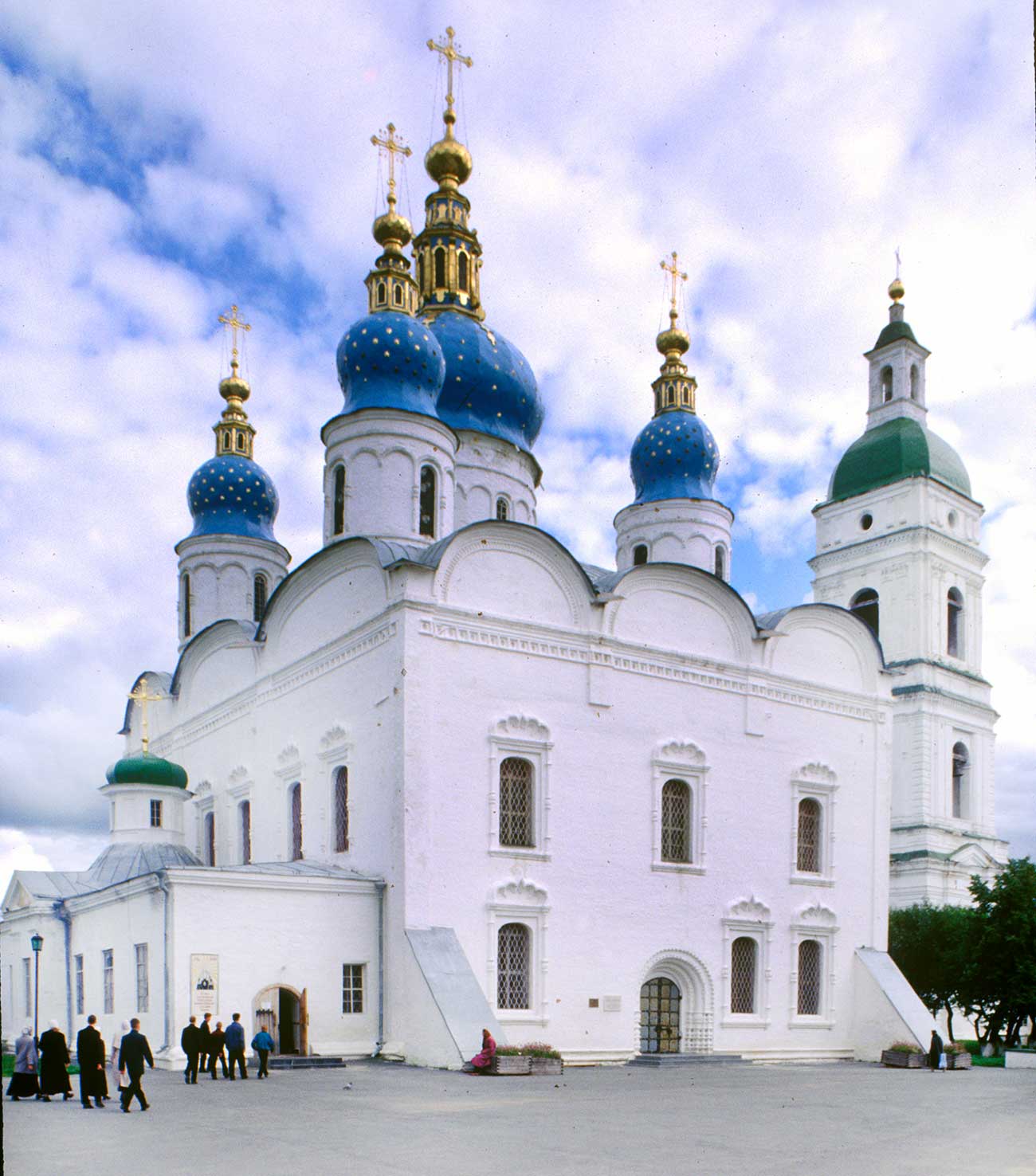 Until the Soviet period, western Siberia was ruled primarily from Tobolsk, whose citadel overlooked the high right bank of the Irtysh River, a tributary of the mighty Ob River and a critical artery for Russian movement into Siberia. It was near the Irtysh that a band of Cossacks, led by the legendary Yermak and supported by the Stroganovs, defeated the Tatar troops of Khan Kuchum in 1582.

Yermak was killed in a surprise raid in 1584, and initially little was done with the area he had conquered. However, Boris Godunov — the powerbroker behind the Muscovite throne who became tsar himself in 1598 — understood the enormous significance of Siberia and launched a campaign to establish settlements there. Tobolsk was founded in 1587 by the Cossack leader Daniel Chulkov at the confluence of the Tobol and Irtysh Rivers. 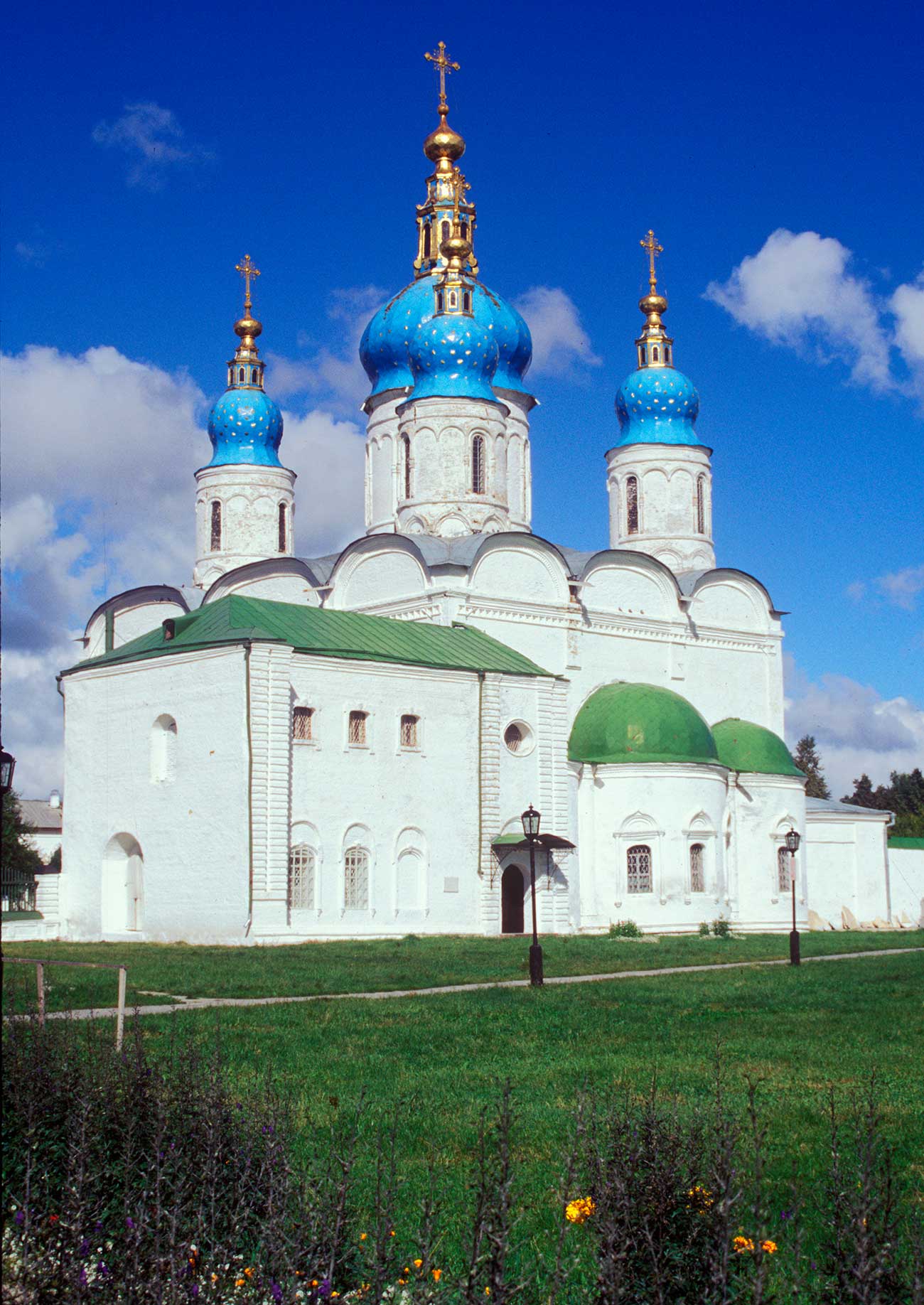 From the Kremlin to Siberia

Tobolsk is divided by topography into two sections: upper and lower. The upper part was reserved for institutions of power, such as the territorial administration and the cathedral ensemble. As early as 1620, Tobolsk become the seat of the vast Russian Orthodox Diocese of Siberia. After a fire destroyed the wooden main church in 1677, Muscovite authorities provided support to Metropolitan Pavel to construct an imposing brick cathedral that would reflect the role of Orthodoxy in the region.

Foundation work began in 1681, yet the actual construction required skills not available in Siberia, and in 1683, a group of experienced masons was sent from Velikii Ustiug in the Russian north to work on the project. The cathedral construction was supervised by Vasily Larionov, a master builder from Moscow, who brought with him specialized materials, as well as a plan of the recently renovated Ascension Cathedral in the Moscow Kremlin. 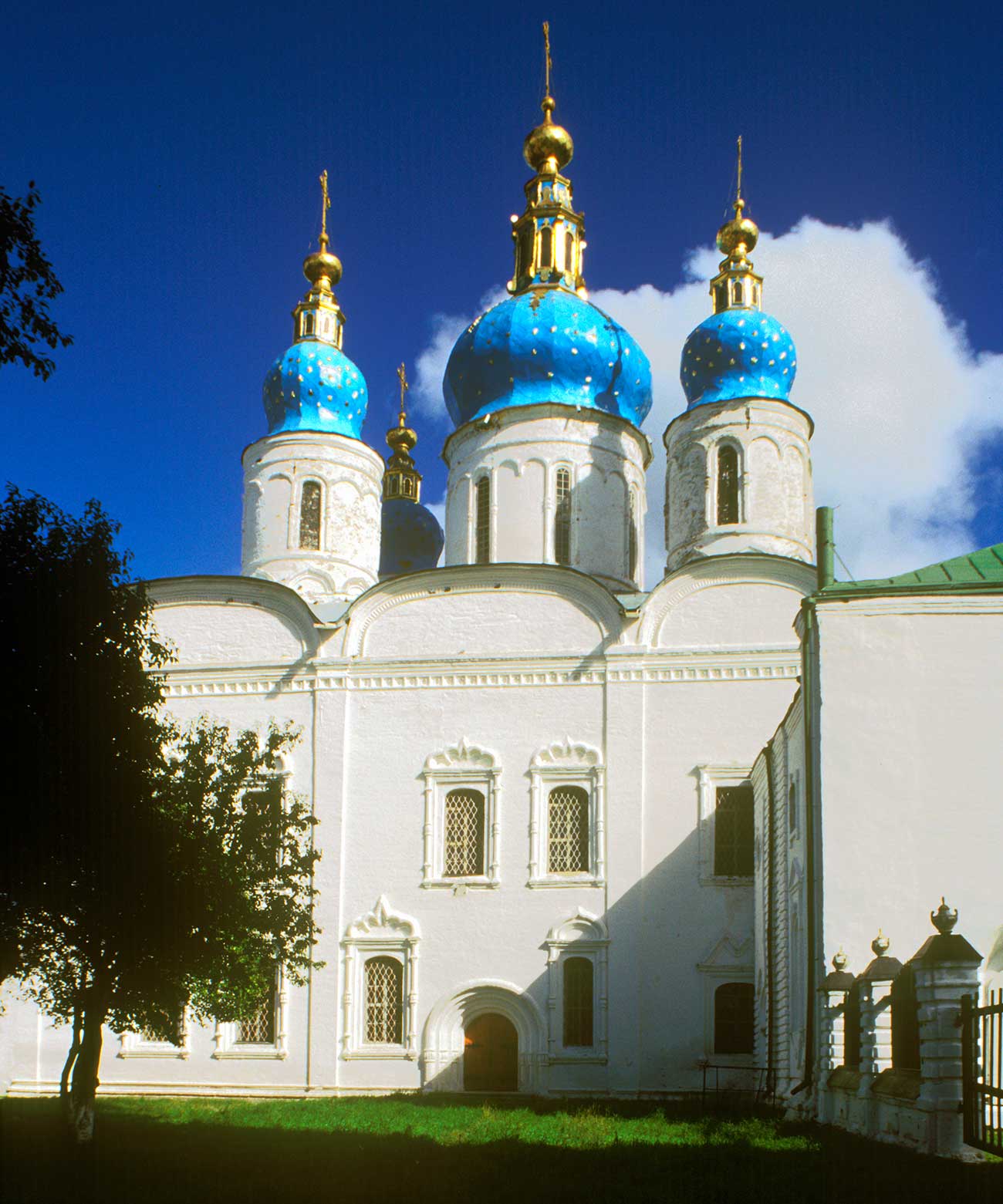 The Kremlin cathedrals often served as prototypes for large churches throughout Russia, thus symbolizing the spiritual and political connections with the capital. Consecrated in 1686 to the Dormition, the cathedral was soon rededicated to St. Sophia (Divine Wisdom) with altars to both the Dormition and St. Sophia. The unusual Sophia dedication linked it to the main cathedrals of ancient Rus in Kiev and Novgorod, while the Dormition echoed the dedication of the primary cathedrals of Vladimir and the Moscow Kremlin.

Indeed, the expanded “Sophia Court,” initiated by Peter the Great in the early 18th century and planned by master architect Semyon Remezov, seems a reflection of the Moscow Kremlin. Construction in this period was facilitated by captured Swedish soldiers sent to Siberia after Peter’s 1709 victory over the King Charles XII of Sweden at the Battle of Poltava. Among their buildings is the Rentereya (state treasury), which spans a ravine near the Sophia Cathedral and was often referred to as the “Swedish Chambers”. 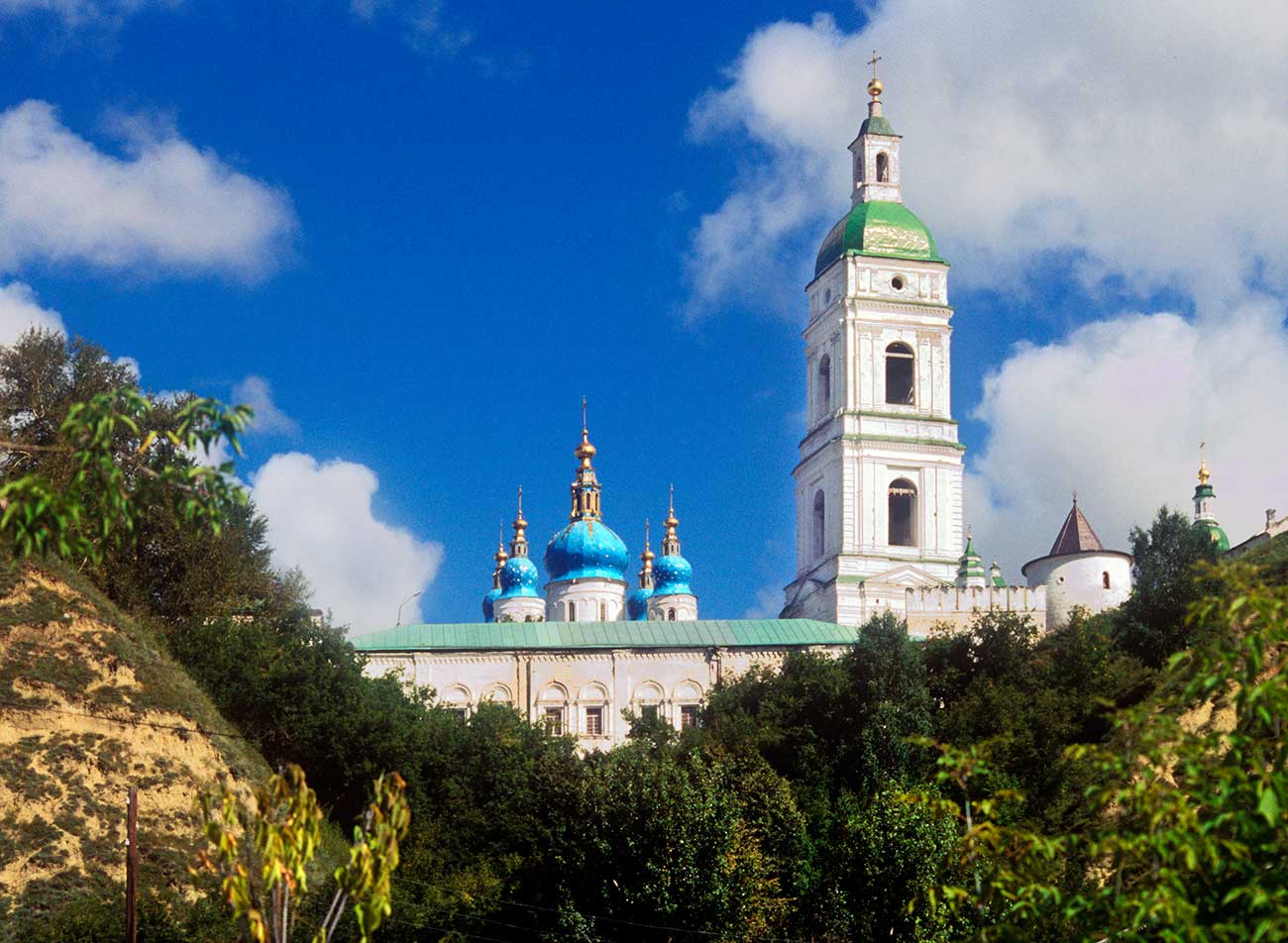 In the mid-18th century, the Sophia Cathedral domes were replaced with the current Baroque cupolas and the roofline was modified from a curved form on top of semicircular gables (zakomary) to a flat roof. During the same period. a chapel dedicated to St. John Chrysostom was added on the north façade, clearly visible in Prokudin-Gorsky’s view from the northwest. The small narthex on the west façade dates to 1851 (removed in Soviet restoration). 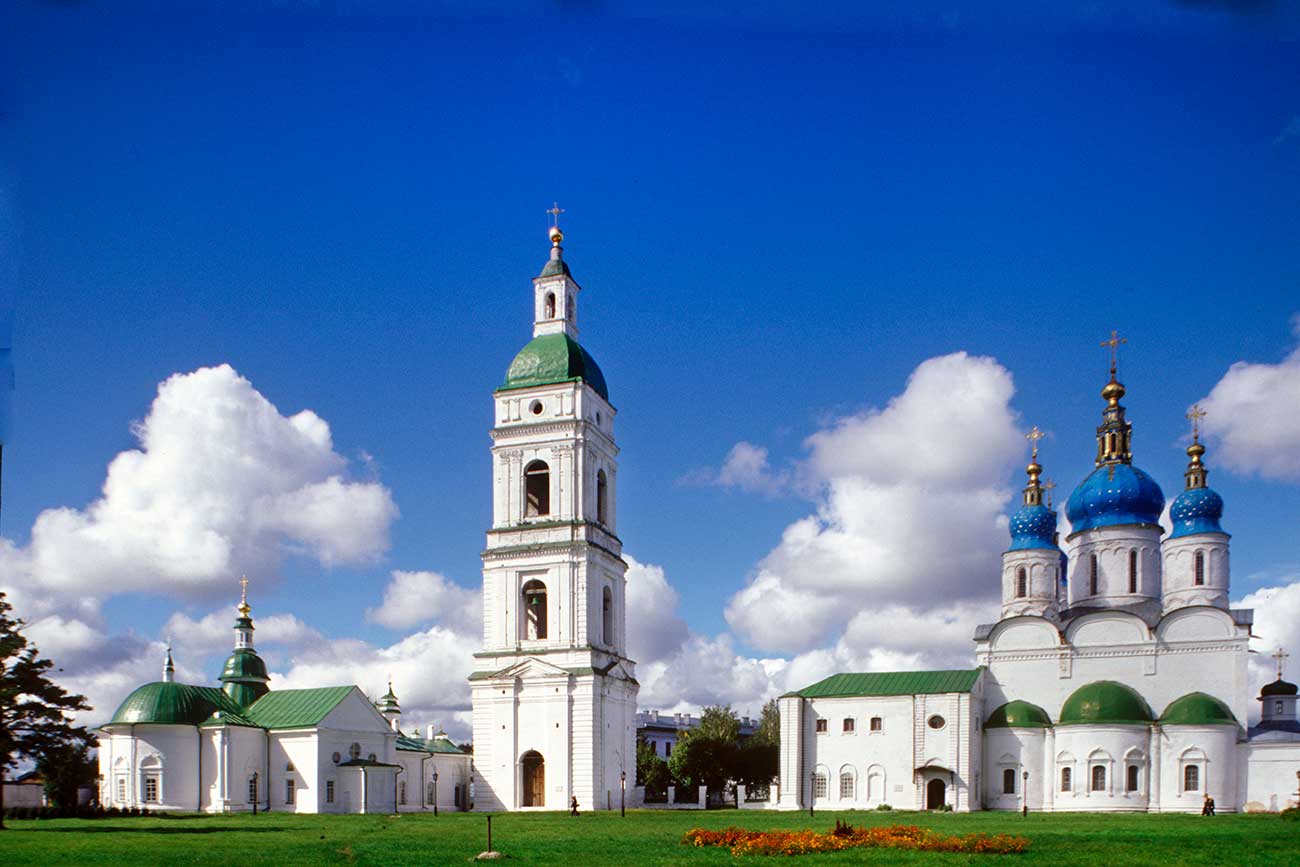 Other buildings of the cathedral ensemble in the Tobolsk kremlin include a 75-meter tall neoclassical bell tower (1794-97); a church sacristy of the same period (on the site of a 1680s Gate Church of St. Sergius of Radonezh); and the Cathedral of the Intercession of the Virgin, built in 1743-46 as a “winter church” for the Sophia Cathedral with a secondary altar to Sts. Antony and Feodosy of Kiev. Closed in 1937, it was revived for worship in 1945.

The Sophia-Dormition Cathedral was closed in 1920 and its interior ransacked. Used in the 1930s for grain storage, the structure was granted to the Tobolsk Museum in 1961. As often occurred in late Soviet restoration work, the roofline was returned to the original curvilinear form over the zakomary gables. The difference is visible in a comparison of Prokudin-Gorsky’s photograph with mine from 1999. In 1993 the cathedral reverted to the Orthodox Church, which embarked on the complex process of renovating the interior, as evident in my photograph of a partially rebuilt icon screen. 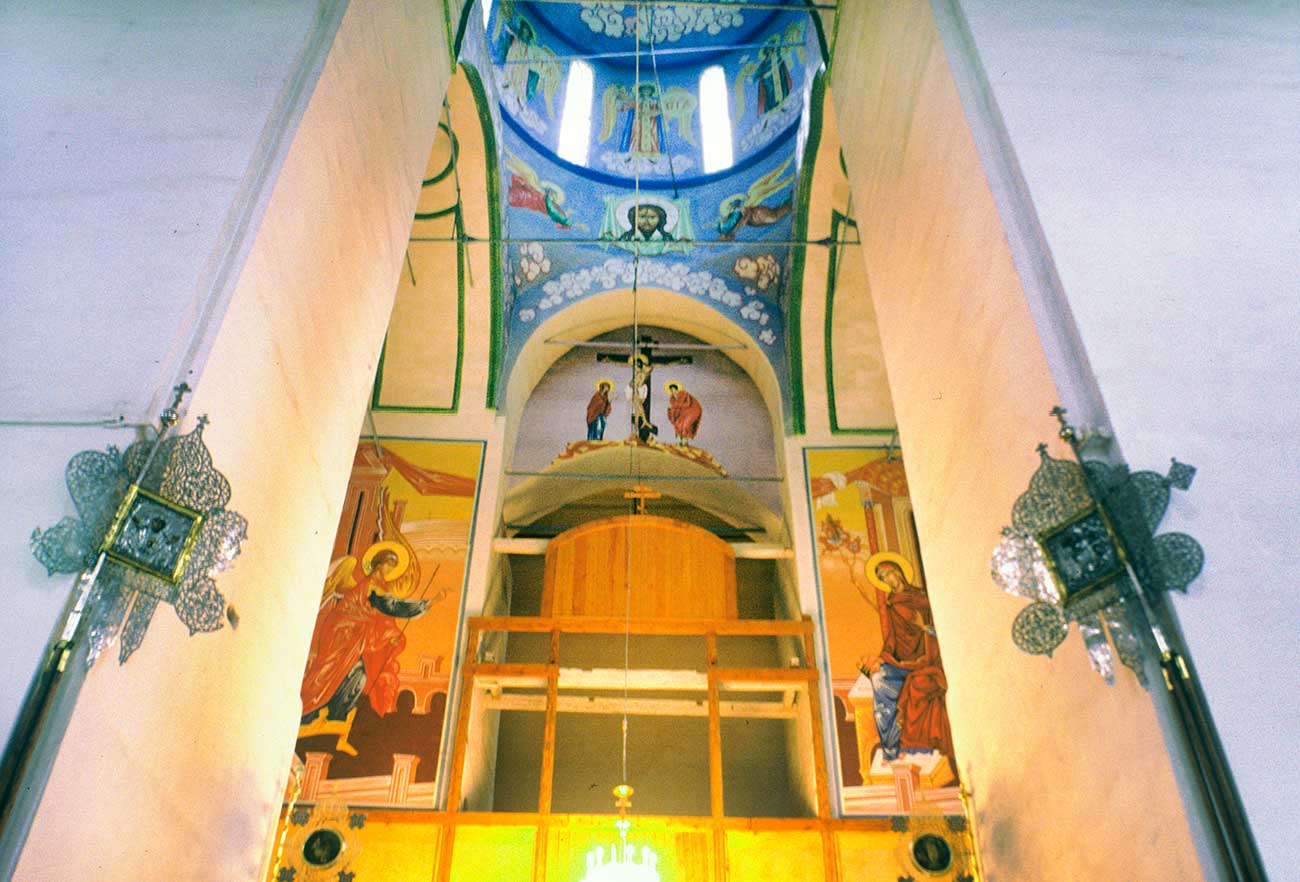 In the early 20th century the Russian photographer Sergei Prokudin-Gorsky invented a complex process for color photography. Between 1903 and 1916 he traveled through the Russian Empire and took over 2,000 photographs with the new process, which involved three exposures on a glass plate. In August 1918, he left Russia with a large part of his collection of glass negatives and ultimately resettled in France. After his death in Paris in 1944, his heirs sold his collection to the Library of Congress. In the early 21st century the Library digitized the Prokudin-Gorsky Collection and made it freely available to the global public. A number of Russian websites now have versions of the collection. In 1986 the architectural historian and photographer William Brumfield organized the first exhibit of Prokudin-Gorsky photographs at the Library of Congress. Over a period of work in Russia beginning in 1970, Brumfield has photographed most of the sites visited by Prokudin-Gorsky. This series of articles will juxtapose Prokudin-Gorsky’s views of architectural monuments with photographs taken by Brumfield decades later.

The Massive Walls of Solovki: From Prokudin-Gorsky to the present

Inside the Smolensk Dormition Cathedral: The mystery of the vanished icon