The Olympic Village: Where dreams of gold will be made 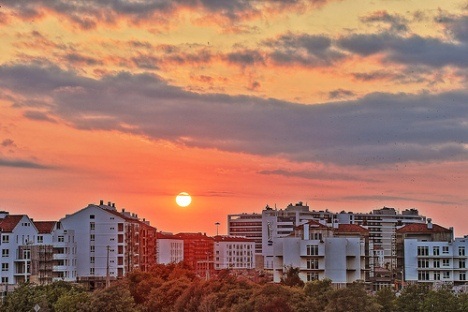 Most of the athletes and their coaches will be living in the main Olympic Village, which will be the residential compound Sochnoye. Source: Press Photo

During the Olympic Games in Sochi, athletes will be accommodated in three Olympic Villages.

The Coastal Cluster will house speed skaters, figure skaters, hockey players and those athletes who will be competing in the Imeretinskaya Valley. Special compounds located far away from the city, were built for those who are set to compete in the mountain region. Most of the athletes and their coaches will be living in the main Olympic Village, which will be the residential compound Sochnoye.

The security measures are already so strict, that visitors need to arrange a visit a few weeks in advance. Each room in Sochnoye is 430 square feet, including the bathroom, and can fit two people. This is twice as much as the International Olympic Committee demands, which is about 130 square feet for each athlete. Right now all the rooms are empty, but the Olympic Village should be ready to accommodate athletes on January 24.

Even from faraway you won't be able to mix up this Olympic bed with any other one. The designers of the 2014 Olympic Games have developed a special new style known as the "patchwork quilt.”

Today torchbearers can be seen running in sports uniforms with this unique print, volunteers will also soon start wearing special patchwork forms. By February, everybody in Sochi will be sooner or later seen in this distinctive "patchwork quilt" clothing. During the Olympic Games the athletes won't be able to tear away from this design even during the nights, since their bed linen will have the same design as their uniforms.

The main Olympic Village won't have any exclusive VIP rooms. The furniture will be identical in all of the rooms. At the special request of the head of the delegation, a TV or a refrigerator may be also installed in the rooms. The comfortable conditions end here – there aren't even any air-conditioners in the rooms! The National Hockey League stars with multimillion incomes will have to learn to live in less than four-star conditions.

Sochi Olympics will be Instagram-friendly

During the Olympic Games it will be prohibited for the teams to set up their own kitchens and to bring personal cooks to Sochi – everybody will eat in one shared canteen, which will be able to fit everybody. The vast menu has already been coordinated with the International Olympic Committee.

Organizers are still considering the issue of entertainment and nightclubs. The only thing known for sure is that a special pavilion will be set up right in the center of the Olympic Village, which will be the main entertainment center. It will also be prohibited to smoke or drink alcoholic beverages there - its main purpose will be for socializing and dancing. All the other recreation services will be provided outside the Olympic Village.

Gazprom is building the mountain village near the "Laura" cross-country ski and biathlon center. All the cottages are built out of northern pine wood – never in the history of the Olympic Games have the athletes had such great residential places. Only the foundation is made out of cement, the rest is built out of wood.

The whole Olympic area has already been surrounded by a rather high wire fence. As for the venues, which are still in the process of being built, they have been surrounded by a metal fence with barbed wire on top of it for the time being. The organizers assure that this is only a temporary measure.

Listen to the audio lesson: Olympics: Settling in

The conditions in the main hotel resort and in the apartment hotel are just like the ones in the cottages. The Americans have decided that they will live in one of the apartment hotels. The French and the Germans have both really liked the cottages, however they made reservations for them in two opposite parts of the village – the two teams just don't get along.

However if such case arises, they won't have a problem of finding a place where they could "clear the air.” The hotel resort located in the mountain village will be working just like any other international five-star hotel – bars, restaurants, night clubs will be open, and you'll even be able to buy alcohol there.