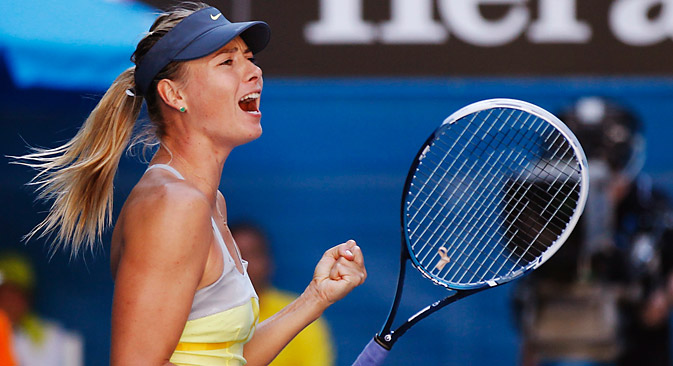 Sharapova won the game with America’s Bethanie Mattek-Sands in the first round. Source: Reuters

Experts fear Maria Sharapova may not make it past the semifinals in Melbourne after losing important training time because of an injury.

The Australian Open, the first tennis tournament of the year in the Grand Slam series, kicked off in Melbourne on Monday. Russia is represented by five men and six women. Despite these impressive numbers, experts agree that only Maria Sharapova is among the real contenders for victory. Even Sharapova’s chances do not look too good; she spent the second half of the last season out of the game because of an injury.

“This year Maria has already taken part in one WTA tournament, but I have not seen any obvious changes in her game under the new coach,” Viktor Yanchuk, a well-known Russian tennis coach, told the Gazeta.ru news website. “But that was only to be expected. Her main objective now is to get back into a good physical shape and regain her confidence. I believe she is capable of reaching the semifinals, but that is probably as far as she can go at the moment.”

Andrey Chesnokov, who was ranked ninth in the world and was a quarter finalist of the 1988 Australian Open, said he is more optimistic about Sharapova's chances.

"I think it's all in her own hands," Chesnokov told Championat.com, a Russian sports website. “She is one of those players who always make their own game. It’s up to her either to win or to lose. Judging from her performance at Brisbane, Sharapova has recovered from her injury and can play at a high level."

Sharapova will face America’s Bethanie Mattek-Sands in the first round.

Another Russian player, Ekaterina Makarova, faced former world number one Venus Williams in the first round. However, she managed to beat her extremely formidable American opponent in three sets.

“Venus’s time has passed; Makarova has outgrown and outclassed her," Yanchuk said. “She is now ready to face even stronger opponents.”

Svetlana Kuznetsova, who ranks 21 in the world, will take on Ukraine's Elina Svitolina in the first round; in the third she may have to face Sloane Stephens, a very capable player from the United States.

“Kuznetsova may well deliver a very good performance here; she has always liked to play in Australia," Chesnokov said. “Unfortunately, as I look at all the Russian women players, I realize that every single one of them hurts somewhere. It's either their hand, or their leg, or their head, etc. This applies to Svetlana as well. Yes, she lost in the first round to Varvara Lepchenko in Sydney. But I think she can do well in Melbourne. The Australian Open is a totally different tournament, with a totally different climate.”

Russia's Anastasia Pavlyuchenkova, who is ranked 26 in the world, may face a serious opponent, Agnieszka Radwańska, only in the third round. Nevertheless, experts are very cautious about her chances in Australia.

“She is now going through a period when she sometimes literally finds it difficult to land the ball in the court," Chesnokov said. "That’s exactly what happened to her in Hobart, when she was defeated in two by Alison Riske. Judging from her performance at the first two tournaments, I can see that Anastasia is struggling to find her game at the moment.”

Yanchuk is similarly pessimistic about Pavlyuchenkova’s chances in the short term. “I doubt that she can show all she’s capable of at the Australian Open, but her game may well improve as the season progresses. She has it in her to make good progress towards the Top 10, but she needs to believe in herself.”

No real chances for Russian men

Russia's best male player at the moment is Mikhail Youzhny, the world's 15th. In the first round of the Australian Open he easily defeated Germany’s Jan-Lennard Struff in three. Chesnokov praised Youzhny for his strong will.

"I like Mikhail, he's a real fighter. He always fights to the end, regardless of whether the game is going well for him. Even if he’s losing a third straight set, he keeps on fighting tooth and nail for every game. He's also been lucky enough to draw fairly beatable opponents in the first rounds."

Yanchuk, however, is more skeptical about Youzhny’s chances. “He is not yet ready to play in the decisive stages of the Grand Slam tournaments,” Yanchuk argued. “Last year he showed his best result so far, reaching quarterfinals at Wimbledon, but that’s about as far as he can go at the moment. He has a fair chance at some ATP tournaments, no more than that.”

Another Russian player, Dmitry Tursunov, may well face Novak Djokovic, the world No 1, in round three. "Tursunov is a kind of player who constantly surprises you," Yanchuk said. “He is very capable, but too emotional, and he can’t sustain a good game for very long. I think that he can make it to the second or third round of the Australian Open, but that’s it.”

“Last season Dmitry won enough rating points to be one of the seeded players," Chesnokov said. “Well done for him; that makes life a lot easier for him now. He did very well in Sydney, reaching the semifinals. That means he is in a fairly good shape. I think he has a good chance of playing with Novak.”