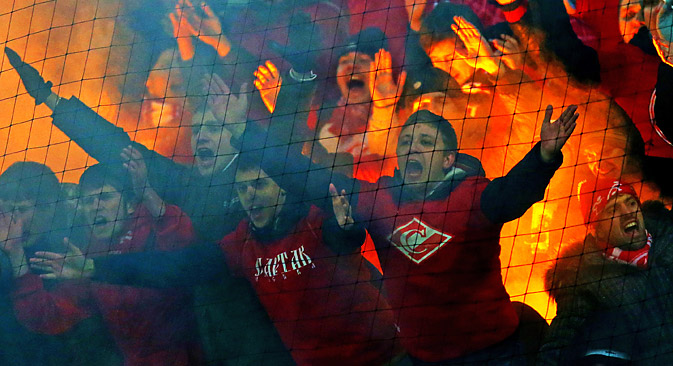 The new law will help to prevent hooliganism at the stadiums. Source: ITAR-TASS

Russia has put into effect the a new law aimed at curtailing hooliganism among football spectators that will, among other things, prohibit spectators from bringing pyrotechnic equipment, coloring substances, anything of a political, Nazi, extremist or provocative nature, to stadiums. They will also not be allowed to hide their faces behind masks.

The new law, dubbed the “Fans Law,” restricts also placards containing insults or obscene images at stadiums, and foreign-language signs must have translations that are notarized or otherwise approved by the event organizers.

One of the primary innovations of the law is the compilation of black lists of fans. Stadium visitors accused of serious infractions could be banned from attending sporting events for up to seven years. Those violating the prohibition may be fined 15,000 rubles ($455) or jailed for 15 days.

Amendments to the law place responsibility for disorderly behavior on event organizers. The penalty for the first violation is a warning; the second results in a suspension of operations.

Significantly, the police, who currently maintain order at the stadiums, will be joined by the stadiums’ security corps – an equivalent of the football stewards now working in a number of European countries. A new surveillance system will also be used, the need for one being a popular topic lately because of the difficulty of identifying perpetrators in footage from stadiums.

The new law comes after a wave of disruptive and potentially violent incidents at Russian stadiums during the past six months. In September 2012 the championship game between the Moscow Dynamo and Torpedo football clubs could not come to an end because fans threw smoke grenades into the field. In November of the same year, during a match between Dinamo and the St. Petersburg Zenit, a firecracker fired from the stands injured Anton Shunin, the Moscow club’s goalkeeper.

There were highly publicized mass disturbances at a stadium in Yaroslavl, when Spartak fans clashed with the local Special Police Force (OMON), and a Nazi flag appeared in the guest stands.

Before the law was enacted, troublemakers at Russian matches were very rarely identified, whereas law-abiding fans were dissatisfied with the actions of the “radical” fans and the harsh measures taken by the law-enforcement agencies.

“Spectators at sports events now know the rules that apply to them, the way it has been with motorists, for instance,” said Alexander Shprygin, president of the All-Russia Organization of Fans. “Still, there are issues that have not been addressed. For example, we don’t like the fact that the law has not been made more specific. When we’re talking about the rules of the road, if you don’t have your seatbelt on, you get one type of penalty; if you are drunk driving, it’s another penalty. But here, whether you were swearing or you ran onto the field and interrupted the match, it’s all at the judge’s discretion.”

Mikhail Grushevsky, a well-known parodist and a CSKA fan, said he believed that such a law is long overdue, although he adds that penalties must be meted out individually rather than in a sweeping wholesale manner.

“I believe the most effective measure for dealing with the fans would be the inclusion in stop-lists for lengthy periods of time of the names of those who have altercations with the police, throw firecrackers onto the field, or injure footballers,” Grushevsky said. “You don’t penalize the mass of fans, you penalize individuals. And if someone’s shown himself to be a hooligan, I would keep him away from all sports, not just football alone.”