5 thrilling ways to have winter fun in Russia 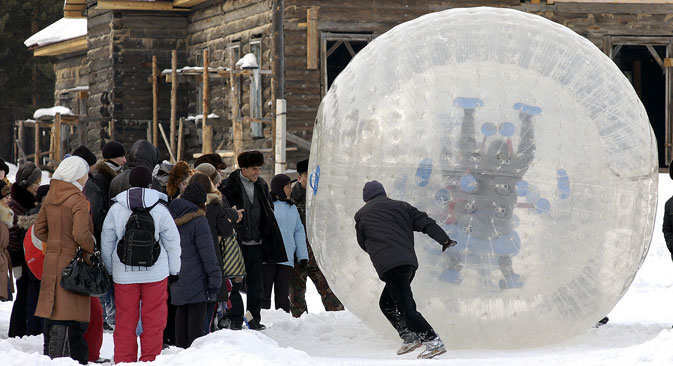 Lori / Legion-Media
Just because it’s cold and there’s snow on the ground doesn’t mean your choice of activities is limited: A winter trip to Russia is the perfect opportunity to try an exciting new outdoor pastime like snowkiting, dog sled racing or diving under the ice of Lake Baikal.

Invented by German paragliding enthusiast Dieter Strasilla, snowkiting – which is, essentially, the winter version of kiteboarding — is just as popular on the Russian plains as it is in its homeland of the German Alps. Russian snowkiters can be found in Moscow and St. Petersburg, as well as the Volga region and Siberia; the sport is usually practiced on Russia’s numerous frozen lakes and rivers.

For instance, Russia’s annual snowkiting championship is held near the city of Tolyatti (600 miles southeast of Moscow), on the Kuibyshev reservoir — the biggest artificial lake on the Volga river. As for amateurs, they can choose from hundreds of locations all over Russia: There are snowkiting clubs in the Far East, in the Caucasus and even beyond the Arctic Circle.

Sled dogs have long been bred by the indigenous peoples of northern Russia. That said, you do not have to venture to the remote peninsulas of Chukchi or Taymyr to ride through a snowy forest in the company of four-legged friends.

There are kennels right outside Moscow specializing in West Siberian laikas, huskies and malamutes, where you can do some sled riding. But if it is professional sled dog racing you are interested in, you should head to the Kostroma Region (210 miles northeast of Moscow), which will host “North Hope,” a major international event, in February.

Diving is not all about coral reefs and colorful fish. A plunge into the clear waters of Lake Baikal won’t allow you to admire flora and fauna as diverse as in the tropical seas, but the world’s largest freshwater lake still has a lot to offer.

Quite a number of divers come here in winter, when the smooth ice covering the lake creates unique lighting underwater.

The best time to schedule your Siberian diving safari is February through March – the ice is still strong enough to reach the middle of the lake in a car. The crust is over a meter thick in some places, but the ice is completely transparent; the only way you can get a more fascinating experience there is by meeting the rare Baikal seal.

Best location: the village of Listvyanka, some 45 miles away from the city of Irkutsk (3,200 miles east of Moscow)

The most famous type of hockey — ice hockey — is known in Russia as “Canadian hockey,” while “Russian hockey” is what the Russians call bandy, a much less common variety of the sport involving a ball and special sticks. A bandy field is roughly the size of a soccer pitch. Bandy matches are usually played outdoors, even when it’s extremely cold.

In recent times, professional teams have been playing in indoor arenas more and more often, which deprives the sport of its main feature, at least according to a lot of fans. The older bandy enthusiasts recall the 1999 World Championship in Arkhangelsk, which took place on an open field in the middle of a harsh winter, with temperatures reaching -22 °F. Amateur bandy is very popular in Siberia and the Far East: Numerous bandy fields are available in Krasnoyarsk or Khabarovsk.

Those who like testing the limits of their bodies should try zorbing. The sport — which involves rolling down a hill inside a transparent plastic orb — is practiced in any weather conditions, but in Russia, it is more closely associated with winter. So, if snowball fights, ice skating and snowboarding are becoming a little trite for you, you may want to try tumbling inside a giant sphere.

Winter zorbing is available in many of Moscow’s parks. The dizzying adventure can be undertaken in pairs, which will at least let you to compare your experiences afterwards.

Test: Could YOU survive the Russian winter?