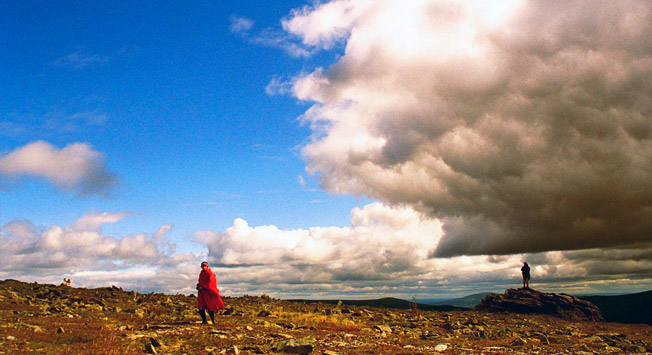 Dmitry Serkov, Flickr
The Soviet Union was always a perennial leader in terms of tourism. In 1975, the Soviet Union had more than 100,000 qualified sportsmen, of whom more than 600 were certified Masters of Sports Tourism. Outdoor tourism is experiencing something of a revival, after hitting bottom the 1990s: fans of campfire songs, nights under canvas and backpack hiking are setting out “en masse” once again. There is growing interest among Russian backpackers in trips to the Northern Ural Mountains, where, in 1959, a group of students from the Ural Polytechnic Institute died in an incident that shook the whole country. To this day, the area continues to attract tourists and tour operators from all over Russia.

There is growing interest among Russian backpackers in trips to the Northern Ural Mountains, where, in 1959, a group of students from the Ural Polytechnic Institute died in an incident that shook the whole country. To this day, the area continues to attract tourists and tour operators from all over Russia.

The goal of Igor Dyatlov’s last expedition was to trek 217 miles across the Northern Urals along a Category III (most difficult) ski route to Mount Otorten (the name “Otorten” means “Don’t go there” in the local Mansi language). On February 12, 1959, the group failed to reach the scheduled end-point of the itinerary — a village called Vizhai. The Feb. 1–2 stay on the slopes of Mount Kholat Syakhl (“Mountain of the Dead” in Mansi) had proven fatal for nine of the students.

There are many theories as to how they died: some say it was an accident; others say it was the work of the paranormal. Not one of these theories has ever panned out, and none is ever likely to do so. This fatal incident in the Northern Urals remains one of the great unsolved mysteries of the 20th century, and hundreds of tourists have made the trip to the Mountain of the Dead in attempts to unravel it.

Mount Kholat Syakhl heads the list of most dangerous unexplained death zones in Russia: 27 people have lost their lives there over the last 100 years. In addition to the Dyatlov Pass incident in 1959, another nine fatalities occurred in 1960, in three separate air crashes involving pilots and geologists. In 1961, the bodies of nine tourists from Leningrad were discovered. More recently, a helicopter crashed on the approach to Mount Kholat Syakhl, with nine people aboard — although, amazingly, no one was killed. The number nine holds a morbid significance for this location.

Despite the fact that Mount Kholat Syakhl remains one of the most difficult places in Russia to reach, its fascination remains undimmed for the modern generation of tourists. These days, there are several possible means of access.

The route to the Manpupuner Plateau — a listed UNESCO World Heritage Site — lies through the Dyatlov Pass. The route takes 14 days. The first 800 miles from Yekaterinburg has to be made in off-road vehicles, followed by 97 miles on foot (on cross-country skis in winter) at a rate of 12.4 miles per day. Overnighting in the Dyatlov Pass brightens the mood after crossing the infamous Mountain of the Dead.

It takes around a week to cover the 250-mile winter route through the Northern Ural Mountains on snowmobile. Hardcore tourists hire off-roaders in the summer and during the off-season. The route runs through the ghost-village of Ushma, which today has just three Mansi inhabitants. The village still has some ruins of the Gulag that was set up there in 1938. Ushma is close to Vizhai — the scheduled end-point of Dyatlov’s 1959 expedition.

As well as trips to the Dyatlov Pass, a number of local tour operators feature trips to a village named Ivdel, which — according to experts on extra-terrestrial flight sightings — “is an epicenter of UFO activity.”

“Not a month goes by without villagers reporting some strange kind of glowing in the sky. No theories about the Northern Lights or passing aircraft can explain this. So far, no logical explanation for this phenomenon has been advanced,” a local tour company representative explained. Participants have to register with the Ministry of Emergency Situations before commencing their trip.

The easiest and fastest way to get to Urals is by plane. All major cities have airports with few direct international flights. The biggest airport in the Urals is in Yekaterinburg, it has flights from such cities as Munich, Prague, Beijing, Frankfurt, Prague, Tel-Aviv, Istanbul, Wien, Dubai and Helsinki. Check Ural Airlines to book tickets. You can also use trains or intercity buses to get to cities of Urals from Moscow or St. Petersburg.